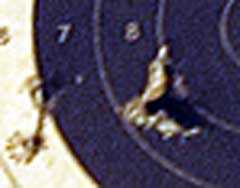 Today we test the accuracy of the new Umarex Trevox air pistol. I like this pistol so far, so if it is accurate it is a best buy.

I shot off a sandbag rest from 10 meters. I rested the bottom of the grip on the bag for most of the test to take up the pistol’s weight, though I did try it completely handheld. I will describe both holds as we go.

The trigger pull reared its ugly head during this test. The pull is long and stacks up toward the end. I think the pull opened some of the groups a little.

First to be tested were the JSB Exact Heavy pellets that weigh 10.34 grains. The first shot hit to the left of the bull at 8 o’clock, so I fired 4 more without looking. After the first 5 shots I looked through the spotting scope (I use the Meopta 10X42 binoculars for 10 meters and 25 yards) and was impressed by what I saw. So I photographed it for you.

Sorry for the bad focus. I shot this with a fill flash instead of a hard flash and the camera moved. These are the first 5 shots from 10 meters. The first shot is at the lower left of the group and I believe shot 2 is just above it. This group prompted me to shoot 10-shot groups today.

That group prompted me to shoot 10 shot groups in this test. I had considered shooting just 5 per target, but I wanted to really see what the Trevox can do, so I went with 10. 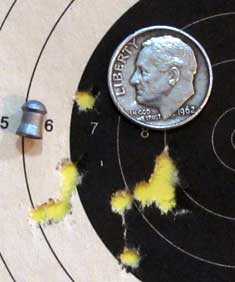 At 10 meters the Trevox put 10 JSB Exact Heavy pellets in a group that measures 1.03-inches between centers.

Next up were Sig Match Ballistic Alloy pellets. They usually do surprisingly well, but in the Trevox they didn’t. Ten pellets went into a group that measures 1.56-inches between centers. The group is very open, telling me that this is not the pellet for the Trevox. 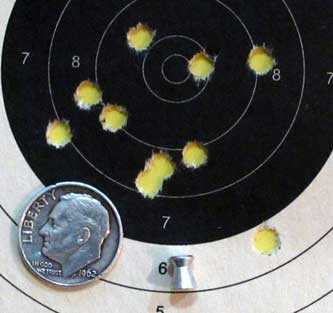 Ten Sig Match Ballistic Alloy pellets went into an open group that measures 1.56-inches between centers. Not the pellet for the Trevox.

The final pellet I tested was the 7-grain RWS Hobby wadcutter. Ten of these went into 1.212-inches at 10 meters. This looked like a great group to me because 8 of the 10 pellets are in 1.063-inches. 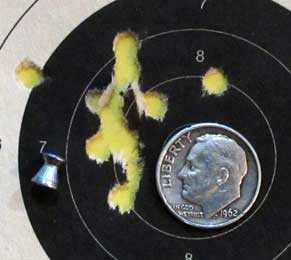 I wondered how contact with the bag was affecting the accuracy, so I shot one final group of 5 with the gun entirely held in my hands. My hands were resting on the bag, but the gun never touched it.

I selected the JSB Exact Heavy because it had grouped the best in the first test. I did adjust the rear sight 2 clicks to the right because all groups had hit to the left of center. But I left the elevation where it was.

Unfortunately this time the heavy trigger came into play, because it wanted to move the pistol at the end of the pull. Also, by changing the hold, the group dropped down by nearly two inches. 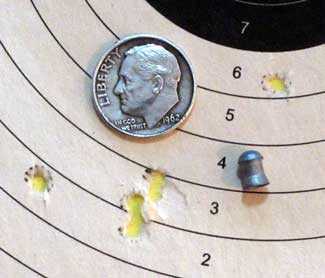 Holding the gun off the bag in my hands, the Trevox put 5 JSB Exact Heavy pellets into 1.663-inches at 10 meters. This is the largest group of the test and it contains just half the shots.

The dot sights were easy to fool (make black with lighting), but the rounded top of the front sight required careful aiming. I wish companies would just put non fiberoptic sights on their guns and let fiber be the option. These sights cannot be removed easily, so mounting an optical sight isn’t going to work. The dot would be centered on the front blade that does not come off the gun.

I think the Trevox pistol did very well today. In my opinion it is a best buy. I only tried three pellets and I only shot a single group with two of them, so there may be a lot more performance than we have seen. But the pistol gives me a feeling of confidence that it will hit what I aim at, and that’s something I look for.

The Trevox is easy to cock, is very quiet when it fires and is reasonably accurate. The pistol has very decent power. The trigger is heavy and has a long pull, but you can get used to it.