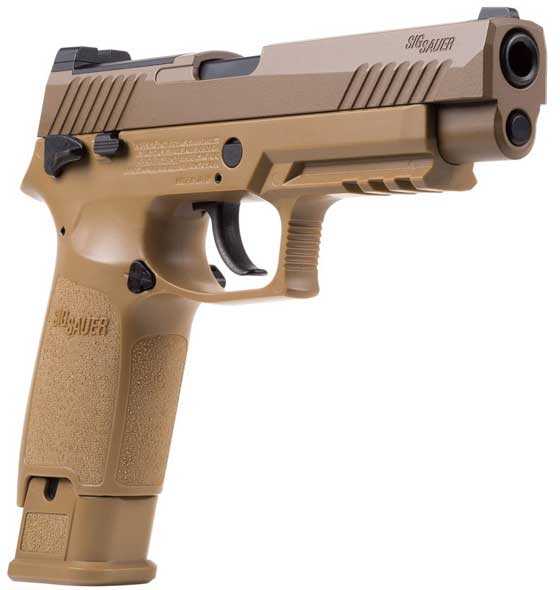 To all our American readers I want to wish a very happy Thanksgiving. Now, on to today’s report.

On January 19, 2017 it was announced that the U.S. Army had selected the Sig Sauer P320 pistol for their new Modular Handgun System. The full-sized gun is called the M17 and the carry-sized weapon is the M18. The rest of the U.S. armed forces also have or will have this sidearm. The nominal caliber for the U.S. military is the 9X19mm pistol cartridge that is best-known as the 9mm Luger.

The M17 is not just a P320 by a different name. The Army specified certain performance requirements for their pistol and they require Sig to maintain a strict separation in their plants between Army contract guns and similar civilian guns. This not only covers the finished guns but also all parts. 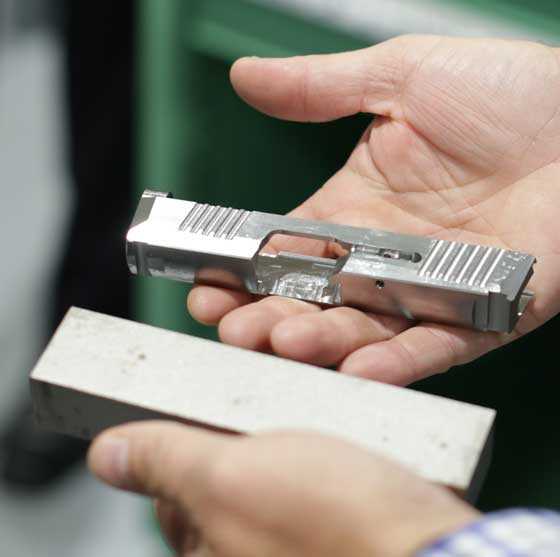 On the tour of Sig we watched them machine solid billets of steel into finished firearm slides.

Sig says the pellet pistol weighs and hefts very much like the firearm and I decided to check out that claim. If you have read this blog for most of this year you know what I am about to say, but I restate it here to inform the newer readers. At this year’s Shot Show in January, Bob Li of Action Support Games (ASG) introduced me to the CZ75 SP-01 Shadow BB pistol. He was so taken with that BB gun because of how closely it copies the firearm. I have already done a 4-part report on the BB pistol, and in that report I informed you that I purchased a 9mm CZ75 SP-01 firearm so I could evaluate Bob’s claim.

That started the ball rolling, and when I visited the Sig booth at the same show, Dani Navickas put the new Sig P365 BB pistol in my hand (still not on the market as of this writing). I was blown away by the small size of the BB pistol. Because it is an exact copy of the firearm, I bought one in 9mm, as well, so I could test both of them side-by-side, as well. That firearm has turned out to be my new carry pistol and is also my new favorite all-around handgun. A HUGE report is awaiting the release of that BB pistol.

And then in July Sig sent out an email announcing a limited run of commemorative M17 pistols for civilians. I tried to place an order for one, but they were all sold before I could get my order in. They had been probably all been sold since the SHOT Show. But Sig did have a similar 9mm P320 M17 pistol that was available (it gets confusing, right?). Would I be interested in one of them? It is a close copy of the Army M17 and, since the Army pistol started out as a P320, I was interested. A third order was placed for a third firearm that has an airgun equivalent!

What am I doing? Have I lost my mind? Why am I buying firearms to go along with air pistols? Isn’t that backwards? The answer is one word — realism. Lookalike airguns have been around for decades, but this new crop is so realistic that it bears further scrutiny.

These new guns weigh the same, look the same, have the same controls, handle the same and fit in the same holsters. You will have an extremely hard time telling one from another when they are both in your hands, and I wanted to be on the ground floor of this movement.

Lookalikes are coming to the top

When people ask me what’s big in airguns these days I always say hunting, and more specifically, big bore hunting. That is where the sharp point of the principal market increase has been for about a decade.

BUT — and this is a really big but — lookalike airguns have also arrived and are heating up to become the next major theme. Shooters today don’t have the same background as people from my generation. They haven’t been exposed to firearms through many diverse channels while growing up, so a realistic sidearm that’s a pellet or BB pistol suddenly makes sense in a way it never did in the past. It provides a way for a shooter to train on something that is realistic yet far safer and less expensive to operate, and that multiplies their possible trigger time. This new Sig M17 pellet pistol fits comfortably into this exciting category and I now have the 9mm pistol to compare it to.

That’s what’s behind this mega-series that I’m writing. I haven’t even figured out all the tests I need to do with both the airguns and the firearms they copy. But I will! I love my job!

Back to the M17 pellet pistol

Sig showed us this pistol while we airgun writers were with them in July (to see the development of the ASP20 breakbarrel rifle) and I was amazed to see just how accurate it is. We all shot it at 10 meters and one of our number — John Bright of Highland Outdoors in the UK — shot incredibly small groups. I tried to keep up with him to no avail. That Brit can shoot! 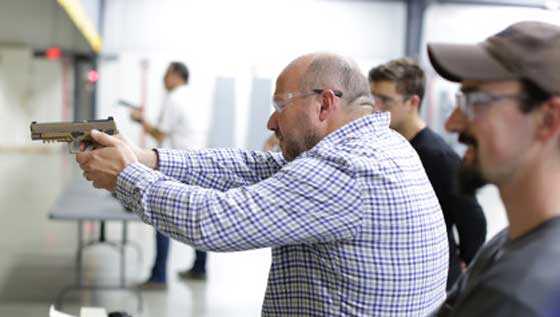 John Bright used the M17 pellet pistol to school the rest of us on how it’s done.

The pistol operates in the conventional way, by a CO2 cartridge in the grip. The cartridge fits inside a removable drop-free magazine assembly that also houses a 20-round removable pellet magazine. I reviewed the Sig X-Five ASP pellet pistol for you back in June-August of this year. You might think, like I did, that the M17 is just the X-Five in a different color, but you would be wrong. The magazine assembly of the M17 is entirely different than the one found on the X-Five ASP. In the M17 both the pellet clip and the CO2 cartridges fit inside the same drop-free mag assembly, where in the X-Five they are separate. 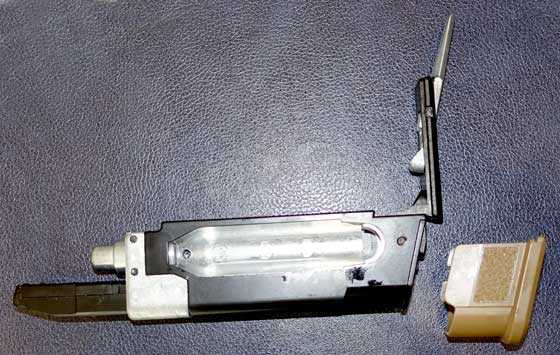 The bottom of the mag assembly pops off and the back pulls down as a lever for piercing the CO2 cartridge. 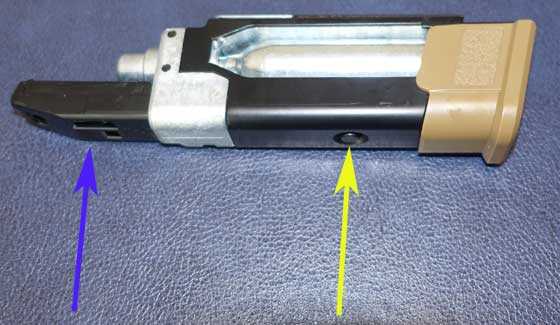 The pellets and CO2 both fit in the M17 mag assembly. Push that button (yellow arrow) and the pellet clip (blue arrow) pops out of the assembly for loading.

One thing these lookalike guns do that appeals to everyone is disassemble. They don’t always have the same parts as the firearms they copy, but the method of disassembly is usually the same. 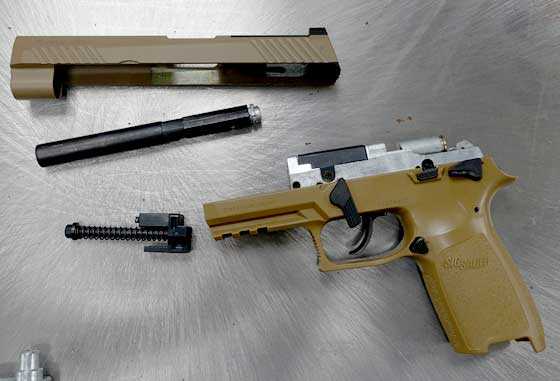 The M17 pellet pistol comes apart in a way similar to the firearm.

Like the firearm, the pellet pistol has a synthetic frame and a metal slide. It has full blowback, so you get the impulse of firing and the weight of the slide gives a good whack to your hand every time the pistol fires.

I have both the pellet pistol and the firearm. I will tell you this — the P320 M17 firearm is a little different than the straight M17. I won’t bore you with the minutia, but my P320 M17 firearm is single action only while the military M17 is DAO. The pellet pistol is DAO as well, so when you fire the gun the blowback action of the slide advances the magazine to the next pellet but the trigger is still double action. That said, this is the lightest double action I have ever encountered. The specs say 6 pounds to pull the trigger and I have to admit that it feels that light. I think the next-lightest double action pull I have ever measured was more than 9 pounds. 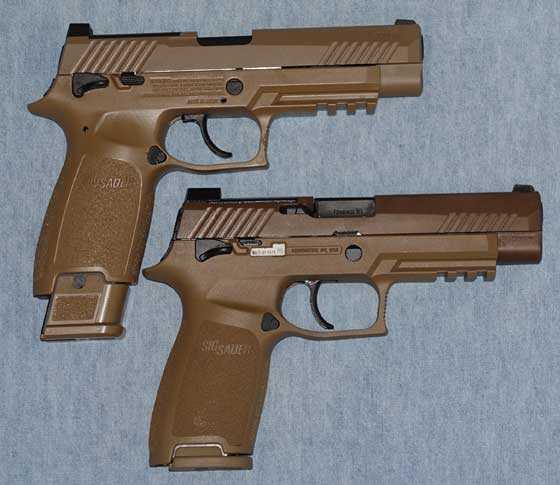 The P320 M17 pellet pistol on top and the P320 M17 firearm below. The air pistol has an extended mag that’s also available for the firearm.

I have more to tell you about the pistol before we begin testing the gun, but this is where I stop today. Since I have already shot this gun for accuracy I know how this test is going to turn out, so if this pistol is on your gift radar, I say yes right now.