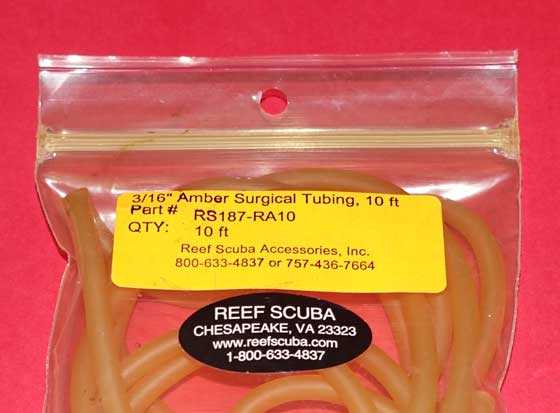 Today I install a new rubber band in the Johnson and if all goes well, we will see what velocity it gives. In case you forgot, when I got this gun the rubber was broken.

This is how I got the gun.

What kind of rubber?

I have been shooting my other Johnson Indoor Target Gun for years, so I had 10 feet of 3/16” amber surgical tubing on hand for repairs. I will start with that.

I had this surgical rubber tubing from my other Johnson.

Step one was to remove the old rubber from the gun. It might look easy, but wherever that rubber was in contact with the steel in the gun it had bonded. It took me 15 minutes to get all the little pieces out.

The old rubber tubing was both brittle and gummy and stuck to the steel parts of the gun.

Since I had it I measured the old rubber. The big piece was 8 inches long and I estimated there were another two inches among all the pieces. So — 10 inches overall. But what if the rubber is missing altogether?

Well, since you are reading this — 10 inches. But here is the deal. This is not rocket science (where IS our Rocket Jane?), so you experiment until you find what works. Heck — I don’t know that 10 inches will work yet.

Loops on each end

The next step is to make a loop on both ends that will fit over the steel hooks in the gun. They used fine string or thread for this years ago, but I found that small cable ties work well. 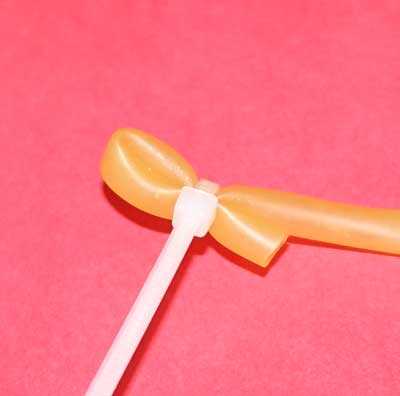 Make a loop like this on each end of the new rubber. Make the loop small because this stuff stretches.

All you have to do now is install the new rubber where the old one came out. It took about 10 seconds. I attached both loops to the hooks then stretched the rubber over the carrier as shown below.

Install the new rubber where the old one was.

The gun is ready to shoot. For today’s first test I counted each BB that I loaded into the magazine tube that’s on the top cover.

Remember what I said about how to cock this gun (and stretch the rubber)? Use a ramrod to push the launcher back, after pushing it forward to catch the rubber. This preserves the plastic launcher and the two thin steel hooks that are used to pull it back during cocking and loading. See this in Part 1. Both things will break in time if you don’t do this. Let’s go!

First to be tested were Daisy Premium BBs.

Oh, my gosh! The launcher wouldn’t catch the rubber when pushed forward and then, when I figured out how to make that work, I could not get the launcher caught by the sear!

I spent some time opening and closing the top cover to discover what could be wrong. In the end, though, I think it was mostly due to a catapult gun that was made in 1947 being used for the first time 71 years later! Hey — this gun is as old as I am! No wonder it doesn’t want to work.

I played and played with it, solving one thing after another. Nothing had to be fixed — I just had to do a lot of funny things like push the launcher forward repeated time to get the rubber tubing to pop into its groove, and then I had to pull the trigger several times before ramming the launcher back to the sear. Once I figured it out the gun shot well almost every time.

Every time I have tested a Johnson I have gotten velocity averages with steel BBs of 100-101 f.p.s. Guess what I got this time? 101 f.p.s. I got that shot after shot after shot. The low was 99 f.p.s. and the high was 101 f.p.s. I remembered how very stable catapult guns are

But this time I had played with the mechanism like never before and I now knew that I was the problem all along. I must have always cut the rubber tubing about 10 inches in the past, because I always got the same velocity. Time to do something different.

I removed the rubber and snipped off about an inch from one end. Then I made a new loop at that end and reinstalled it.

Voila — the launcher is now catching the rubber easier when I push it forward. It isn’t 100 percent and I still have to fiddle a little, but it’s much more reliable. The trigger still has to be pulled several times to catch the launcher when it is rammed back.

This time Daisy BBs averaged 116 f.p.s. That is the fastest I have ever seen a Johnson shoot. But like I said — I was the reason for that all along. Now I knew that a shorter rubber would increase the velocity — time to test some other BBs.

Next up were Dust Devils. Now Dust Devils are considerably lighter than Daisy BBs, so they should go faster — right?

I learned two things from this test. First, I don’t need to shoot 10 shots and then average the string with the Johnson. One shot is all it takes. This gun is incredibly stable, as far as velocity goes.

The second thing is I don’t need to test a range of different BBs. If Daisy BBs go a certain speed, all other steel BBs are going to go the same speed. See — an old dog can learn new tricks!

I removed the rubber and snipped off another inch. Then I made a new loop and installed the rubber in the gun. Since there were still some Dust Devils in the magazine I went with them.

Shortened the rubber another time

I snipped on another inch and made a new loop but now the rubber looks really short. So I laid it next to a ruler and photographed it. I said I have been snipping off an inch each time, but it looks like it has been more than that.

The rubber has gotten really short!

I installed the new shorter rubber and fired the gun one last time. The velocity was 116 f.p.s. because the rubber broke upon firing. I did see some abrasions on the left side of the rubber this time when I stretched it to fit the gun.

The new short rubber is on the hooks but hasn’t been pulled back over the rear yet. As you can see — it’s really short! Notice the left side of the rubber. I think there are some small abrasions there. 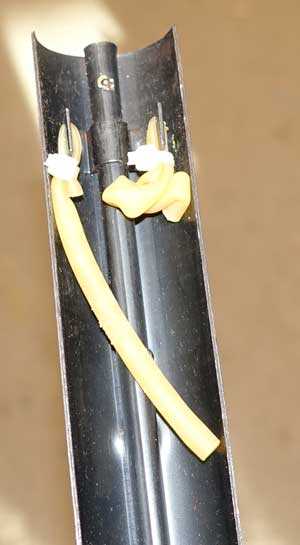 Just one shot and the rubber broke. It was probably too short, though those abrasions may have caused this.

What I have learned is with this surgical tubing I should start with about 7 inches and go from there. Not only is that good for me to know, now everybody who puts one of these Johnsons back in service knows what to use and how much, as well.

I also learned that the velocity is what it is. It doesn’t vary. Shoot one BB and that’s where your gun is shooting.

Finally I learned that the brand of BB probably doesn’t matter that much. Of course I haven’t tested any lead BBs yet, but I think this holds for all steel BBs.

I’m not done with the velocity test. Some readers who are into catapults suggested a different type of rubber and I bought some. So we are still experimenting.