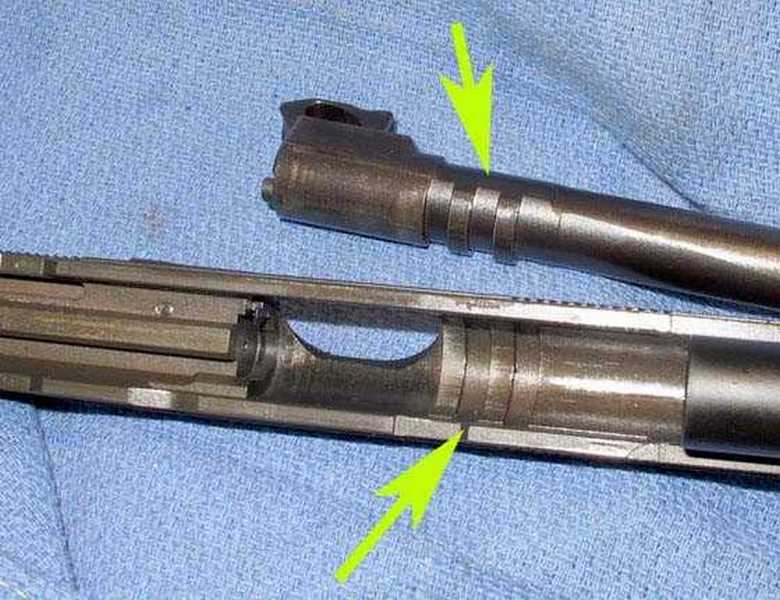 Today is the day I tell you about the performance of the CZ75 SP-01 firearm. You may remember I am doing an expanded series on this particular BB pistol because it resembles the firearm so closely. And many owners of the CZ75 have told me what a wonderful handgun it is. So, I bought one and plan to test it with the BB pistol.

This is something I don’t normally do, although this year I plan to do it several more times. The reason I don’t compare a firearm to a pellet or BB gun is there is so little to compare — until now. While talking to Bob Li from Action Sport Games (ASG), the importer and distributor of the ASG CZ75 SP-01 Shadow BB pistol, he told me he owned a 9mm CZ75 SP-01 pistol that he really enjoyed. Bob is in sales, and the Great Enabler met his match at this year’s SHOT Show. By the time the show ended, he had me wanting the firearm.

When I returned home I immediately tried contacting CZ USA to see if I could get a writer’s sample for testing. They never responded to repeated contact attempts, so I forgot them and bought one directly off Gun Broker. And that was when I made the decision not to get the Shadow.

What is the Shadow?

The BB gun is the CZ75 SP-01 Shadow. The CZ75 SP-01 Shadow is an SP-01 that goes through the CZ custom shop for a trigger job and comes with a fully adjustable rear sight. The PROBLEM with the Shadow is the front sight. It’s fiberoptic — just like the front sight on the BB gun. Ain’t no way I’m going to pay $900 or more for a firearm with a fiberoptic sight — especially not when nearly the same model with the plain sight is $300 cheaper!

The BB gun did not go through the CZ custom shop, either, so its trigger is straight production anyhow. I therefore decided if I’m going to test a CZ firearm I will get the one I want with the sights I want— the CZ75 SP-01.

Most of the CZ 75 owners I polled own the CZ75B, which is a plainer handgun than the SP-01 I got. The B model doesn’t have the light rail on the underside of the frame. Had I not been making this comparison test I would have gotten the plain B model, because I will never use a light rail. But the SP-01 that I got is very close to the SP-01 Shadow BB pistol I’m testing. Only the lockwork and sights differ, and, as I already said, the BB pistol doesn’t actually have the better trigger, so there is really no important difference.

These days a quality handgun like this can be obtained with virtually every trigger action you can name — SAO, DAO and everything in-between. That’s because each agency buying them has a different requirement, and the factory has to be able to supply them all to make the sales. This pistol I got is both single action and double action, so you carry it with a round in the chamber and the hammer down. Draw the gun and pull the trigger and you’re in business. Naturally all remaining shots are fired with the hammer cocked.

Once the hammer is cocked the two-stage trigger pull is 2 lbs. 1 oz. for stage one with a definite stop at stage two. Stage two breaks at 6 lbs. 4 oz., which sounds like a lot, but for a defense pistol shooter it isn’t bad. For target work it is a little heavy and stage two has some travel you can feel, but gunsmithing can correct that. I plan to get it down to around 4 lbs. and dead crisp.

The CZ75 SP-01 weighs 40 ounces on the nose. That’s on the heavy side for a 9mm handgun. And the barrel is locked with the slide, so the operation is a delayed blowback, similar to a 1911. Lugs on the barrel engage with grooves in the slide until the rearward motion of both barrel and slide pulls the rear of the barrel down, unlocking the slide to complete its rearward travel. This system has the advantage of reducing felt recoil. Put the weight of the gun, its design and the lower power of a 9mm cartridge together and you have a handgun with very low recoil. I shot it right after shooting a .22 Magnum revolver and, while there was more recoil, it wasn’t very much.

Lugs on the barrel mate with grooves in the slide (arrows) to lock the slide and barrel together.

The low recoil contributes to the accuracy potential of the pistol. So does the slide that is contained within the walls of the frame instead of being outside. The design of the rails makes it easier to fabricate a pistol whose slide and frame are both tight enough for accuracy and loose enough for reliability. With a 1911, slide-to-frame fit is something the gunsmith tinkers with and finishes by lapping the parts together. I used to tune 1911s in my salad days. 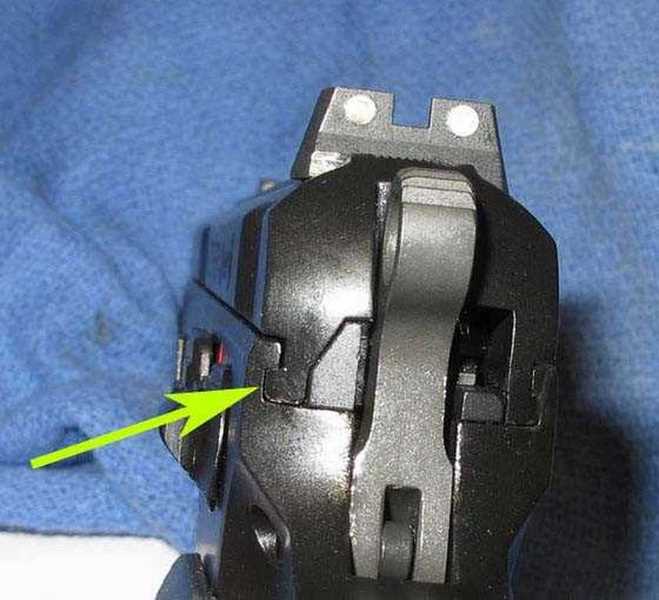 The CZ75 slide fits inside the frame (arrow), rather than outside like a 1911. This makes the gun easier to manufacture with closer tolerances, yet leave room for operations.

Back to the sights, the rear sight adjusts for windage but not elevation. But as I was examining them I noticed that the dots were not white, they were pale green. That usually means tritium dots and, sure enough, this pistol has night sights. The half-life of tritium means they will last for the rest of my life. 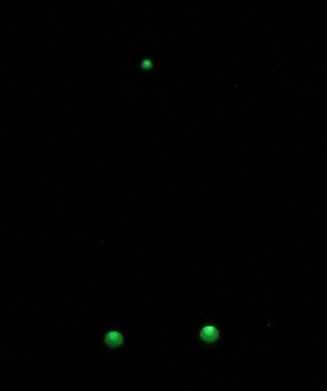 Taken in darkness, the tritium night sights glow. No need to expose the sights to light, because they are radioactive. They will glow like this for 15-20 years.

What I wanted to know most of all is whether this pistol is accurate. And I was at the right place to find out. So I loaded 10 rounds and proceeded to engage the target at 15 yards. I shot two-handed for two reasons. First, because I am old and feeble, and second because young people these days don’t understand a pistol held in just one hand. I am also doing a feature article on this firearm and BB pistol for Firearms News and I needed a “hero” shot they could accept.

Ten rounds landed in a 3.452-inch group at 15 yards. The best thing is the shots are well-centered on the bull and the aim point. 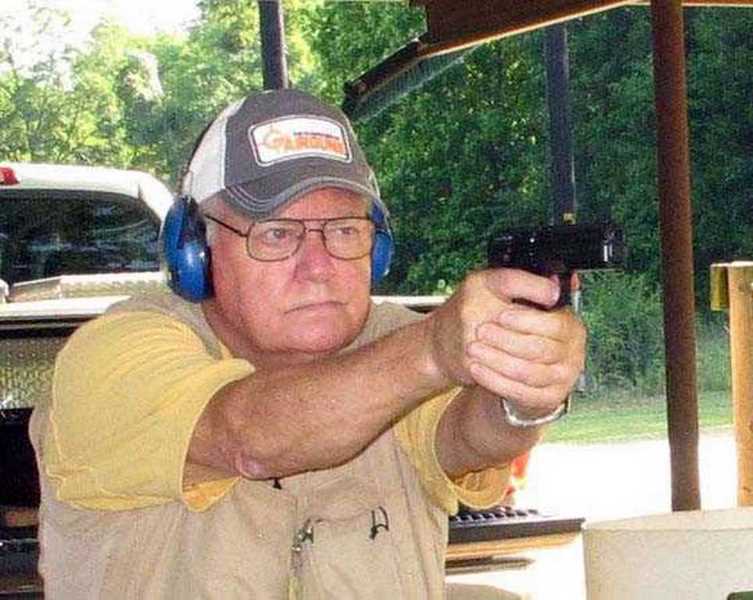 It’s not a hero shot unless I sneer a little. I would not normally shoot a handgun this way, but this is what the public expects. 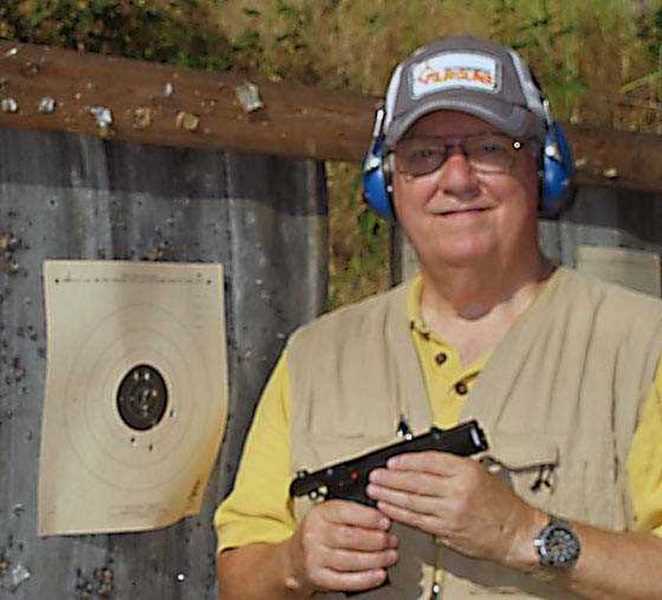 And the results are seen at the target. The CZ75 SP-01 firearm is an accurate pistol. 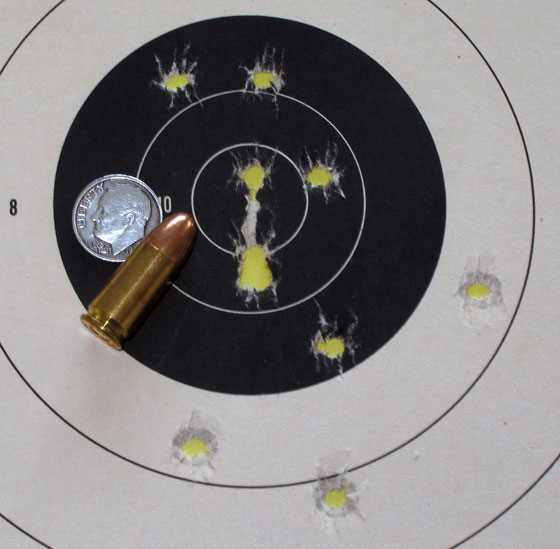 And here is the target. Ten shots in 3.452-inches at 15 yards. I’m pleased the gun is on the mark. The round is Remington factory ammo.

This was a wonderful experience! This brand new pistol is accurate, shoots to the point of aim, has minimal recoil and feels great in the hand. All the things that got me buzzed about the ASG BB pistol are carrying over to the firearm. Bob Li was right! Now, I have to test both the BB gun and the firearm for defense.