History and new together

This is Monday when I usually write an historical report about an airgun or something. Well this is about the pellet revolver called the Webley Mark VI with battlefield finish, which is a modern air pistol, but today’s report will also be historical. Remember — I own both the pellet gun and the firearm it is patterned after.

Normally Part 2 is the velocity report. Today, though, we will be looking at some things we don’t usually get to see in an airgun report. Let’s begin with one of the big ones — field stripping the revolver.

The Webley Mark VI revolver was made for the military in World War I, which was 1914 to 1918. At that time it was considered essential for a military weapon to be two things. The first is rugged. It had to stand up to all sorts of abuse that might range from tropical heat and moisture, through desert sand and heat, arid mud and dirt and even polar cold. It isn’t easy for a firearm to tolerate all those environmental extremes and still function reliably. Guns like the P-08 Luger that were made at the same time were made from machined parts with tolerances so tight that they kept out a lot of the bad stuff, while guns like the M1911 were made purposely loose to function even when they were dirty. Both approaches work, though the guns with tight tolerances do tend to start failing when they get wet or dirty, and especially both. So you design holsters that keep them clean even in hostile environments. 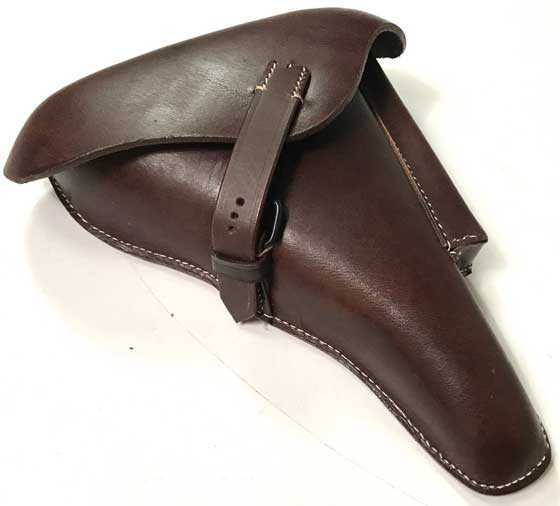 The Luger holster surrounded the pistol, keeping dirt out to the extent possible. 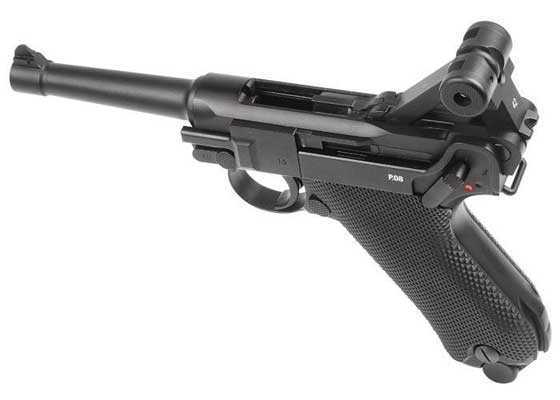 The design of the Luger with its tight tolerances makes it susceptible to any dirt that gets inside. 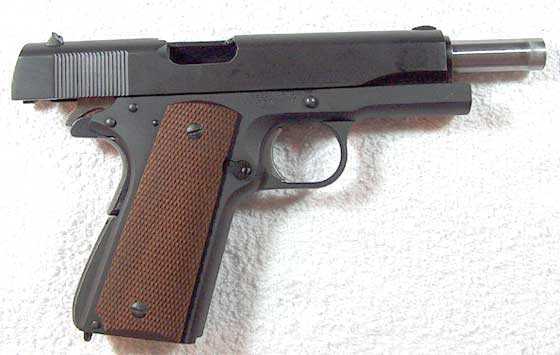 The M1911 pistol was made with loose tolerances to tolerate dirt better than guns like the Luger.

Semiautomatic pistols were a pretty new technology in WW1, but revolvers had been around for many more years. Revolvers also have tight tolerances. In many cases, and certainly in a double action revolver like the Mark VI, they are much tighter than the parts in a semiautomatic pistol, but for wartime use they also had to be designed loose to handle the dirt. That’s hard to do with a revolver, whose chambers in the revolving cylinder have to align precisely with the breech of the barrel so the bullet isn’t shaved off on one side when it jumps the gap from cylinder to barrel. A semiautomatic has a barrel that the cartridge is loaded into, so misalignment at this point isn’t an issue.

Webley locks up the loose cylinder in the Mark VI by lifting the bolt and rocking it forward when the trigger is pulled. This jams the cylinder into a semi-locked state at the moment of firing. The rest of the time it rocks side to side loosely and feels sloppy. 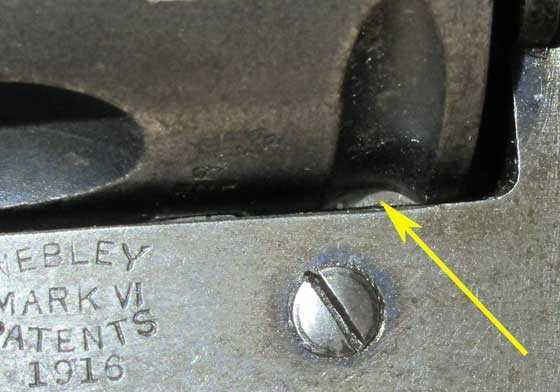 The Webley bolt (arrow) rocks up and forward a few hundredths of an inch to lock the cylinder in alignment with the rear of the barrel.

The pellet gun uses the same technique for locking the cylinder and indeed locks up even tighter than the firearm. Of course it isn’t more than a century old, either!

The other thing a military sidearm must do is disassemble easily and quickly for cleaning and repair. It must not have any parts that can easily become broken or lost. The P08 Luger gets an F rating in this category, as it is not easy to disassemble. In its day the score would probably have been a C or better, because that was the state of the technology at the time. The 1911, in contrast, was rated an A back in its day and still gets a C today. Most double action revolvers were Fs for disassembly and haven’t improved much in the intervening century.

The Webley Mark VI, in sharp contrast to other revolvers, rates a A for ease of disassembly and cleaning, and a B for small parts loss, because one screw has to be removed from the gun. If you have a pocket or pouch to hold it while you clean — no problem.

Disassemble the gun any further and you are going where the designers never intended you to go. But for cleaning this is as far as you need to go because the barrel is already broken open for access.

Differences between firearm and pellet gun

Note the wide slot in the head of the firearm disassembly screw. It is slotted to accept a sixpence — which is one more item you’ll need in your kit if you want to remain true to form. If you want to be a yank, an American quarter or nickel works well. 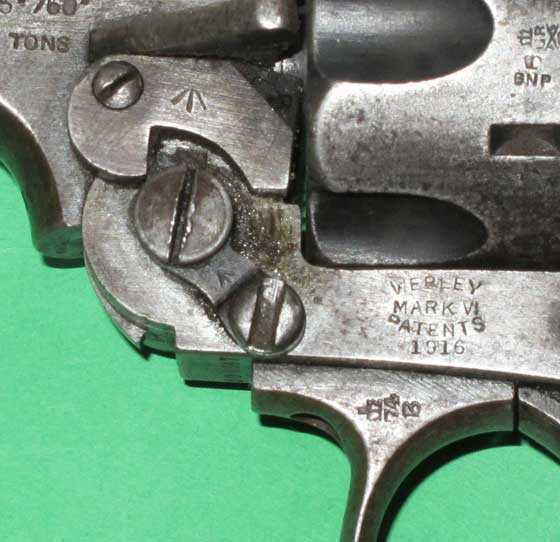 The firearm disassembly screw was slotted to fit a common coin soldiers might have. 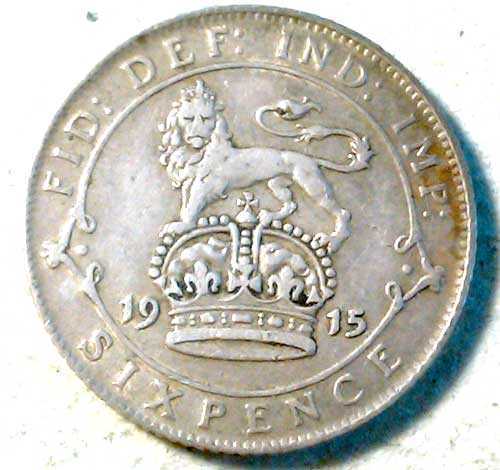 The old silver sixpence was 19mm in diameter — slightly smaller than an American nickel. An American quarter also fits the screw head nicely and gives you more to grab. 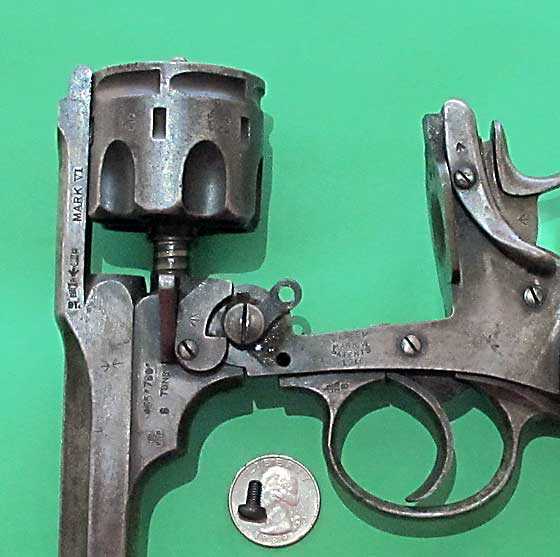 With the firearm disassembly screw removed, rotate the cylinder cam lever counter-clockwise until it pushes on the spring-loaded cylinder cam. Push the cam slightly and the cylinder lifts off the axis like this.

Disassembly of the pellet gun 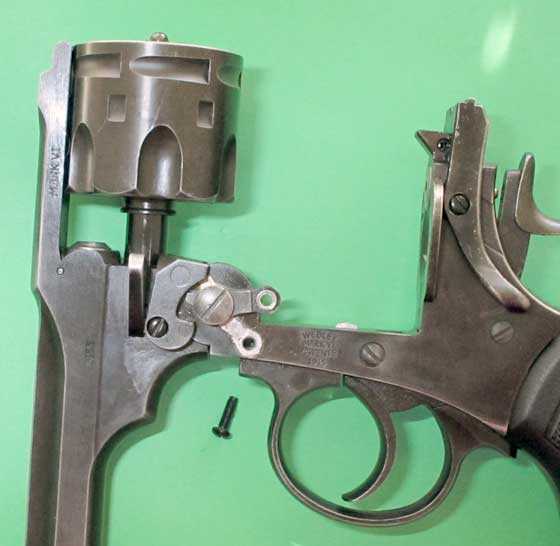 The pellet gun disassembles in a similar way, though not exactly the same.

We know that the pellet cartridges are lifted up for extraction when the revolver’s barrel is broken open, but they don’t fall out unless the gun is tipped. If the barrel is broken all the way open, they fall down flush again. So, with them sitting down inside the cylinder, they make a perfect place for loading, because the pellets go into their bases. 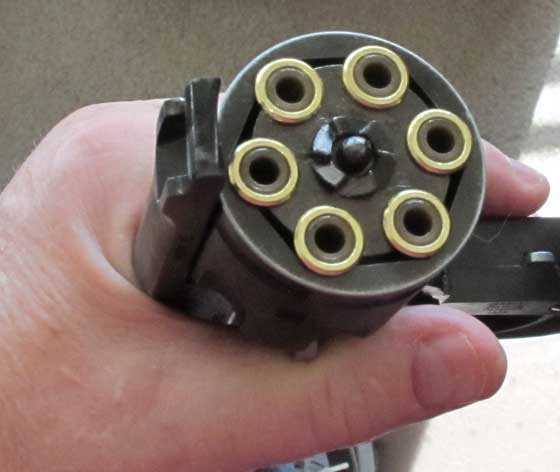 With the cylinder exposing the cartridges this way, loading will be easy.

I was asked whether the rear sight is adjustable and I said it isn’t. But from the pictures it sure looks like it is. So let’s take a closer look at it and see for ourselves. 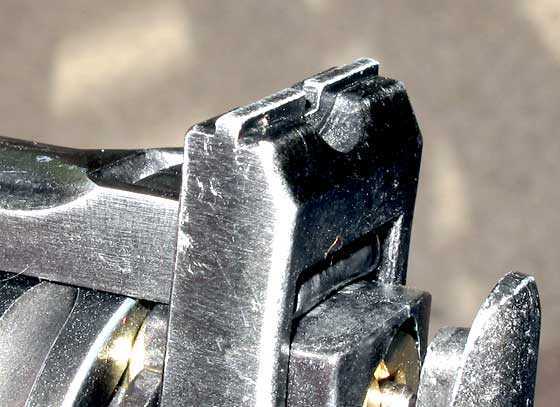 As you see, the pellet gun rear sight is one piece and not adjustable. 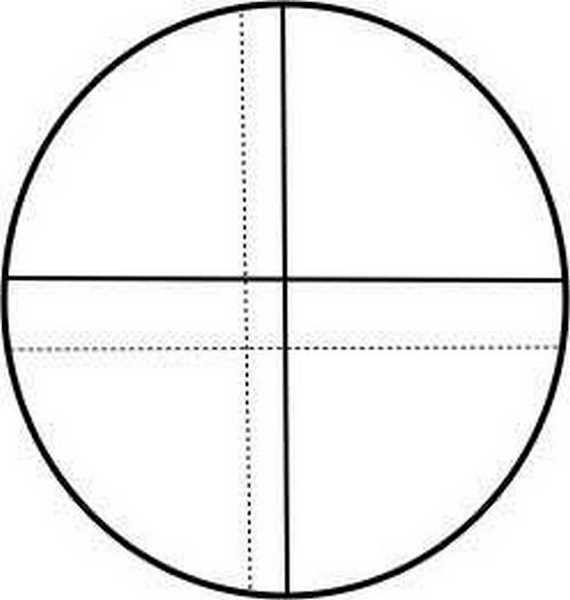 How to mount a scope: Part 4