Sometimes I wait a long time to start a report. Today is one such time. This report on the Webley Mark VI with battlefield finish began back in June of 2018, at the Texas Airgun Show. A reader came to my table and talked about the Mark VI pellet revolver with a battlefield finish. We went outside to talk, and by the time we finished I was the proud owner of a .455-caliber Mark VI revolver! I have shown you that gun in the past. 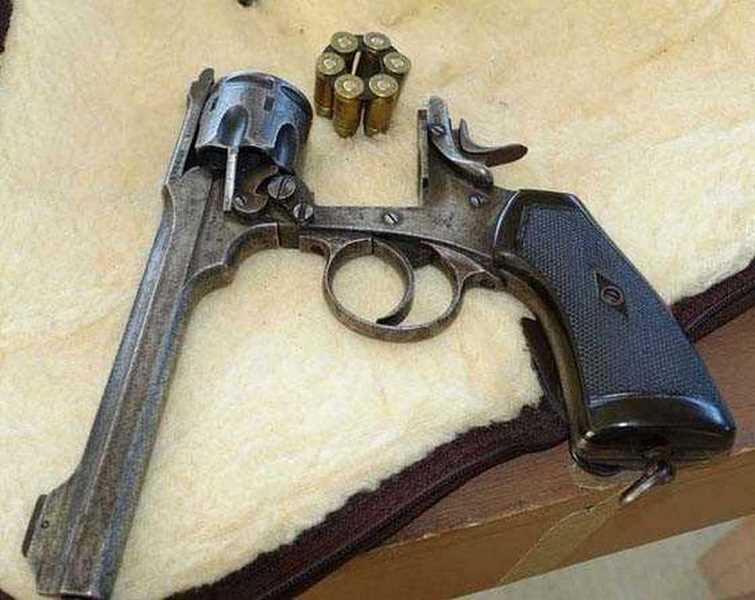 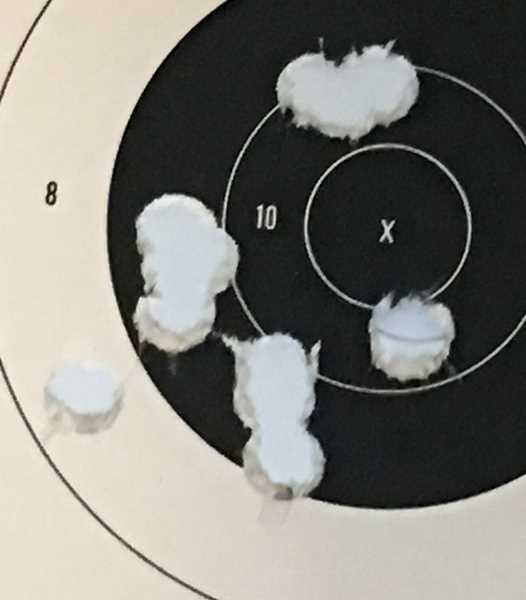 We have also seen the Mark VI CO2 airgun in the past. In 2014 I tested the BB revolver for you. That airgun is extremely realistic and was a hoot to test, but today’s gun is a pellet revolver with a rifled barrel. I have a lot more to say about it, but first, let’s look at the beginnings of this fine weapon.

The Mk VI, or Webley six, as it is also known, is a 6-shot double-action revolver chambered for the British .455 round. That round is a rimmed centerfire .45-caliber cartridge with a bullet diameter of 0.455 inches. Its 265-grain round-nose lead bullet travels at a slow 600 f.p.s. out the muzzle, but was rated in early trials as a manstopper that was superior to even the U.S. Army’s .45 ACP.

The Mark VI revolver was adopted in 1915, but it was the outgrowth of a progression of .455- and .476-caliber revolvers that had been evolving for close to half a century by that time. The recoil was considered low for the era, but it was still more than many new conscripts were able to easily tolerate. In the time between the wars, the Brits phased it out in favor of a .38-caliber cartridge that was chambered in a series of Webley and Webley-esk revolvers. That said, the Brits continued to issue and support the Mark VI for many more years.

Many Mark VIs were sold in the U.S. as surplus and converted to accept the .45 ACP cartridge, held in place by moon clips. That’s the most commonly encountered chambering of this revolver today in the U.S. While the ballistics are ballpark-similar, the American cartridge is somewhat hotter and will eventually shake the big revolver loose unless it is loaded down. I much prefer to shoot it in its original .455, which is easy to reload. If you do shoot the .45 ACP or the .45 Auto Rim (same cartridge as the ACP but made with a rim for revolvers) you should load .455-inch bullets for accuracy.

Okay, let’s take a look at the pellet pistol. It’s a revolver that holds six cartridges, each holding one pellet that’s loaded into its base. This is a difference from the BB revolver that loads the BBs into the nose of each cartridge. This air pistol fires both single and double action, just like the firearm.

To extract but not eject the empty cartridges after firing, the pistol is broken open by pressing in a stirrup on the left side of the hammer (sorry lefties). Then with the other hand break the barrel down and the extractor lifts the cartridges up out of the cylinder. 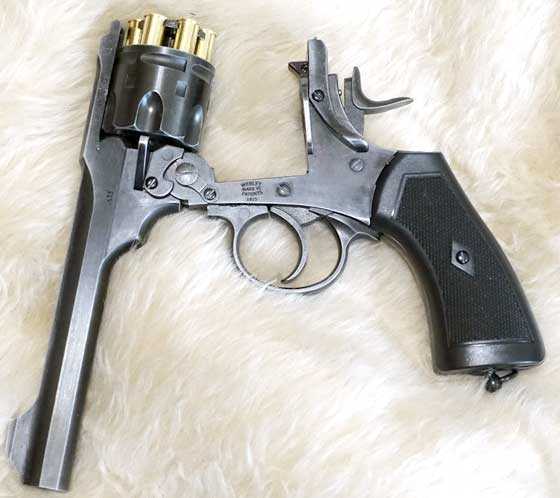 The battlefield finish is there to resemble a sidearm that’s seen use. If you carry it in a holster it will wear even more. If you don’t care for the worn look there is also a silver Webley Mark VI Exhibition revolver.

Webley, who makes and distributes this pellet revolver, has made a dandy container for it. The cardboard box is lithographed with important historical information about the Webley service revolver, to include a list of all the movies it has been seen in since 1934!

Inside the box is an owner’s manual that includes basic operating information, including the directions for field stripping the revolver. Yes, you can take this one apart! More realism!

And Webley has also included a copy of the military Volume I, Pamphlet No. 11 for the Pistol (.455-inch), dated 1937! This pamphlet includes the manual of arms for the revolver, to include a mounted cavalry drill against dummies!

This pellet revolver was made in Taiwan, and is based on original blueprints and marked with 1915 markings. In short, Webley has gone out of their way to give as much realism as possible to the owners of this revolver.

There is even a right hand brown leather Webley Mark VI holster available for the revolver. If you look in the military pamphlet, it looks correct.

The gun is powered by a 12-gram CO2 cartridge housed in the grip. The lanyard loop is used as the tightener to pierce the cartridge, so it looks correct. The left grip panel lifts to reveal where the cartridge goes. 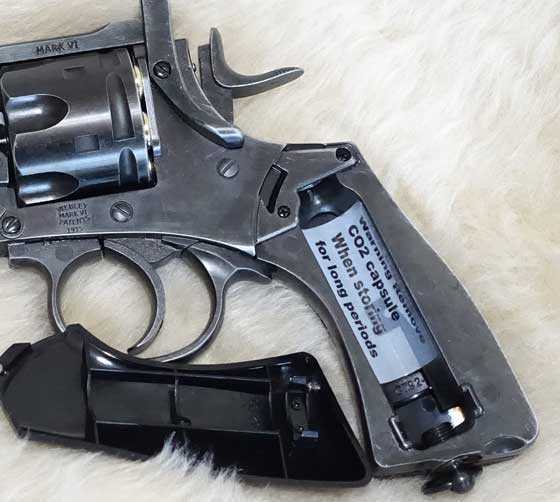 The left grip panel comes off for the CO2 cartridge. When it’s on, it’s tight!

The front sight is a square post that’s not unlike the original except for one detail. The original has a small screw holding the front blade in place.

The rear sight is part of the stirrup that opens the action for loading. It’s similar to the original, though made better and sharper. 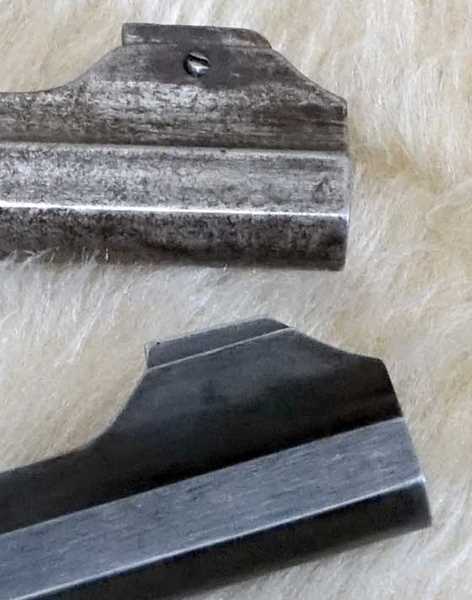 The firearm front sight (top) has a screw holding the blade. Yes, the firearm’s finish is more worn than the finish on the pellet gun. 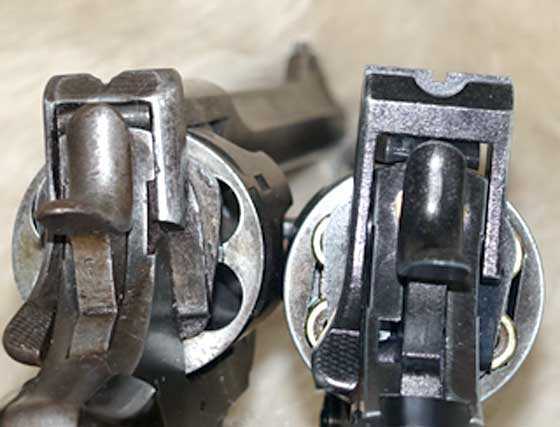 The pellet gun rear sight (right) is sharper and better defined than the sight on the firearm.

Flies in the ointment

There is a safety on the right side of the frame that the firearm doesn’t have. And there are a plethora of white warning letters on the same side of the frame. I suppose we have to put up with both of these because they are there for litigation, but they do spoil the look. 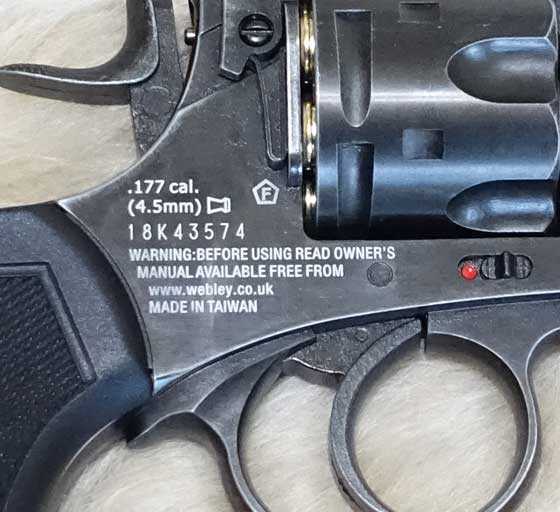 The bad stuff is all in one place on the right side of the revolver.

The world of lookalike airguns has evolved to the point that the buyer’s needs are being carefully considered all the time. I was delighted with Crosman’s M1 Carbine when it came out in 1966. It was more realistic than any previous lookalike and I think it woke a lot of people up.

Then came Umarex with a host of lookalikes, including the Legends Cowboy lever action BB gun that’s just been released and I will get after the SHOT Show to test for you. But other manufacturers are making realistic airguns now, too. I have reported on a number of action BB and pellet pistols already, and I guess today’s report fits in with them, though I don’t see too many security types carrying a Mark VI in their holsters these days.

Here is my shout out to the industry. If you want to sell more lookalike airguns — realism is the key. Here are things to think about, and I am assuming your gun is as close to the prototype firearm as you can make it.

Finish — I had a heck of the time convincing manufacturers that buyers are interested in original finishes. A 1911 that looks like it has been carried 4 years is more desirable than a pristine example of the same model. A Colt Python, on the other hand, deserves a Royal Blue finish. So, when you are ready with your M1 Carbine, put it in a wooden stock with a wooden handguard and distress the matte metal finish.

Packaging — If it’s a Makarov pistol, put it in a cheap cardboard box like the Russians do. Daisy went as far as recreating the original cardboard box for their wire stock first model and they filled it with real excelsior.

Documentation — Do like Webley and include period literature. If not a manual because none exists, how about a replica wanted poster for a single action — anything that’s appropriate?

Accessories — Slings, holsters, replica carry bags (for the Garand and M1 Carbine) are things you should think about. Sell them as accessories if they cost too much to bundle.

This Webley Mark VI revolver is an interesting airgun. The manufacturer has obviously understood the market and has built a gun for the serious collector as well as the shooter. Let’s hope it’s accurate!