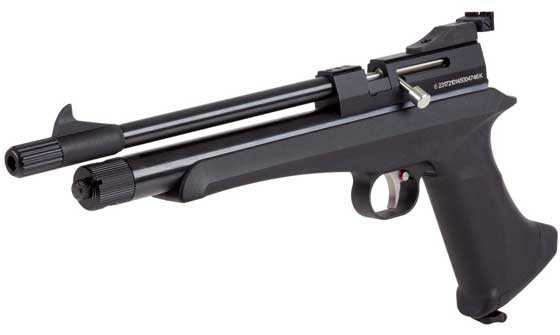 Today I test the Diana Chaser air pistol with the UTG RDM20 Reflex Micro Dot sight we have been reviewing. The last test was done with the sight mounted on a Beeman P1 back in January, and it did quite well. I told you I wasn’t going to run a special report on the sight, but instead I would be testing it on several airguns as time went by. The Chaser test is today.

The Chaser’s rear sight had to be removed to mount the UGT dot sight. There is a short rail in front of the pellet trough but I didn’t think it was quite long enough for this sight base.

The rear sight is held on the pistol by two Phillips screws. To access the rear one the elevation screw must be removed, along with the spring under the sight leaf.

The Chaser’s rear sight has to come off to make room for the UTG Micro Dot. It’s held to the Chaser’s receiver by two small screws. To access the rear screw, the elevation adjustment screw is adjusted all the way up and both that screw and the spring that moves the rear sight leaf are removed. 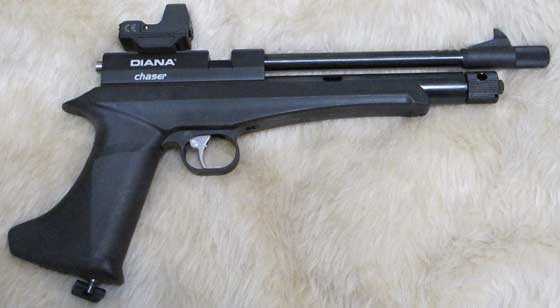 There is the Micro Dot mounted on the pistol. The front sight does stick up, but the dot is higher and you won’t see the front sight when you aim.

Cut to the chase
I didn’t want to retest the Chaser, so I read Part 3 of its report and discovered the RWS Superdome pellet is the best, hands-down. I should have read the whole report, however, because the magazine also did best last time. But the single shot tray was mounted in the receiver so that’s how I tested it.

The test is at 10 meters off a sandbag rest. I shot two-handed and the gun seemed to be rock stable.The first step was to sight-in, which I started at 15 feet and finished at 10 meters. It took several shots to get on target, but I would like to comment on how adjustable this dot sight is. It has a huge range of adjustment and I was able to get the pellets into the black where I wanted them.

The Chaser’s trigger is very light and went off before I was prepared a couple times. Once I became accustomed to it, though, I could feel the blade stop at stage two and I knew the shot was ready to go. After that the shots went well.

Dialed the dot way down

I had the dot set on the brightest illumination setting for sight-in, but once the pistol was on target I dropped the illumination down to the 5th position. There is only one more position that is dimmer than that.

At the low settings the dot shrinks in size, enabling the shot to be more precise. Given the bag rest I was using, this was almost like shooting an air rifle. There was no movement until the shot fired and the pistol recoiled a little on its own from the force of the gas.

For the first target I fired just 5 shots. I didn’t feel my concentration was up to a 10-shot group just yet. But five went into 0.793-inches at 10 meters. They are also nicely centered in the bull, thanks to the sight. 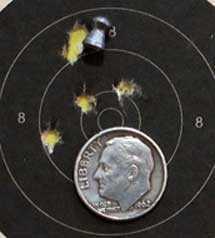 The Chaser put five Superdome pellets into 0.793-inches at 10 meters when using the Micro Dot Reflex sight. This is pretty good!

The first target gave me the confidence I needed to shoot a 10-shot group. And by this time I had also become accustomed to the light trigger.

The second time I just shot and never looked at the target until it was all over. Shot number five went off before I was ready, but the dot was on the bull. I just don’t know that it was centered. I couldn’t call that shot a pull because I didn’t see where the dot was when the gun fired. The other nine shots were the best I could do. The group measures 0.964-inches, with 7 in 0.521-inches. 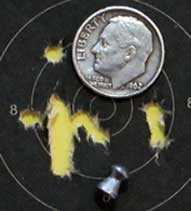 The sight was easy to install, once the rear sight was off the Chaser. The sight sits high enough that the pistol’s front sight can’t be seen.

If you buy this sight now you get the one with the upgraded battery life, which is 30,000 hours of continuous runtime. You may never need to change the batteries in your sight!

The bottom line is this UTG Micro Dot Reflex sight is turning out to be a best buy. I wish Pyramyd Air would carry it! I do plan on testing it on other airguns as they become available. 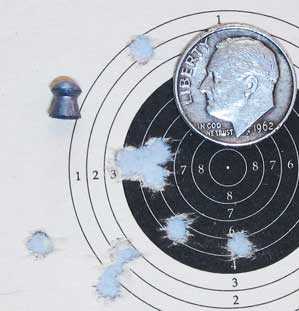 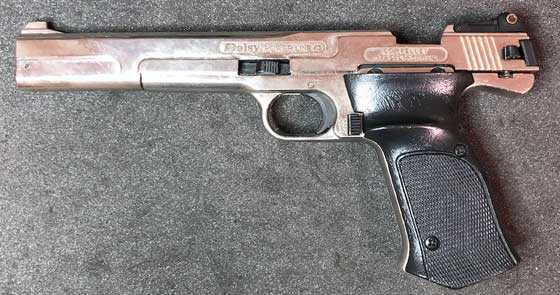