And, there is something else. A couple weeks back reader Kevin alerted me to the fact that the seller in Bulgaria from whom I bought the Diana peep sight also had a BSF peep sight for sale. He had it advertised for Anschütz, FWB and Walther, which is why I never noticed it. The price was reasonable and, as before, the shipping was free, so I ordered it. It’s here and I would like to show it to you. 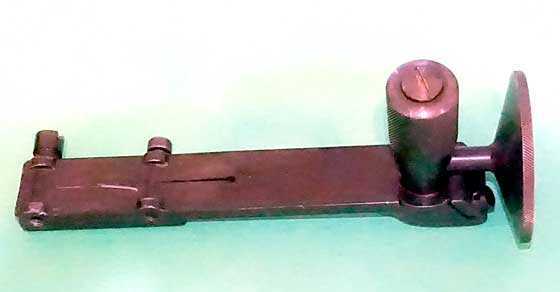 The BSF S54 peep sight is simple and ruggedly built. The vertical adjustment knob that’s sticking up in this view has detents.

The horizontal adjustment knob is on the right side. There are no detents in that adjustment.

The bottom of the sight has a clamp on the front, which is on the right in this picture. The two screws control the clamping pressure. There is no positive stop for recoil, and this rifle doesn’t seem to need one.

This sight is definitely a throwback to the 1950s! It’s made from mostly steel parts except its base that’s aluminum. And there isn’t a scale or index mark on it anywhere. There is no way to record where the sight is set. You have to shoot the gun and note where it hits, then adjust from there. There are also no marks to indicate which way things move when the sight is adjusted! It’s a very non-target peep sight! But this S54 is a very non-target match rifle, so the sight is well-suited to it.

Rear sight has to come off

Since the rear sight is aligned with the front sight, it’s in the way of the sight line of the peep, and has to come off. Could I lower it all the way and be able to shoot over it? Sure, but when I tried it I could see the rear sight through the peep hole and that was disconcerting. 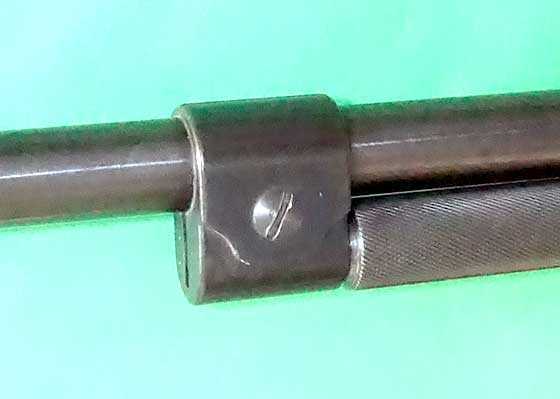 The cocking lever anchor has to come off to allow the rear sight to slide off the barrel.

Now, in the 1950s the Germans (and Americans) never used just one part when 27 would do. So, there is lots of work to be done! 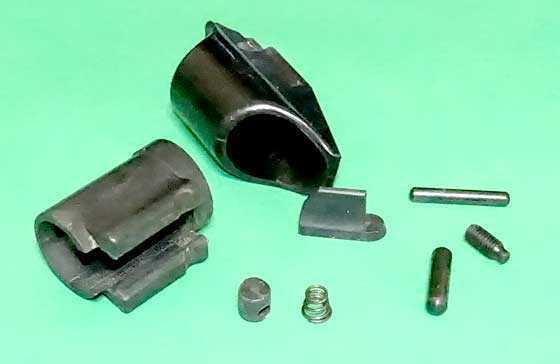 The front sight came off the rifle. Lots of parts!

After the photo I bagged the parts for security.

Next the cocking lever anchor came off. This was just the anchor and the screw that held it.

Then the rear sight came off. It was a bunch of parts, too. 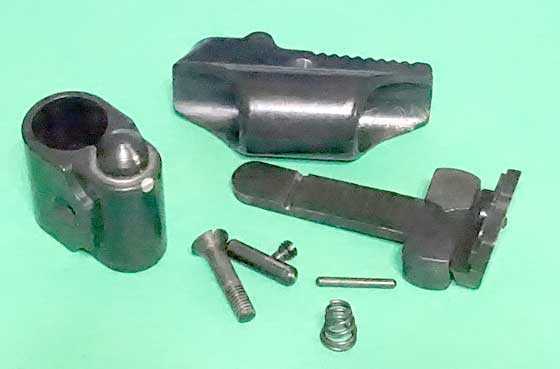 The rear sight and cocking lever anchor (on the left) were a lot of parts, too.

Now, the cocking lever anchor and front sight went back on the rifle. The rear sight is in a plastic bag and may never be reinstalled. The rifle is ready to receive the peep sight.

The peep sight slides over the peep sight base on the rear of the spring tube. It sticks off the back of the rifle several inches, which brings it close to the sighting eye. I slid mine back almost as far as it will go because the peephole is very small and I want it to be close to my eye. 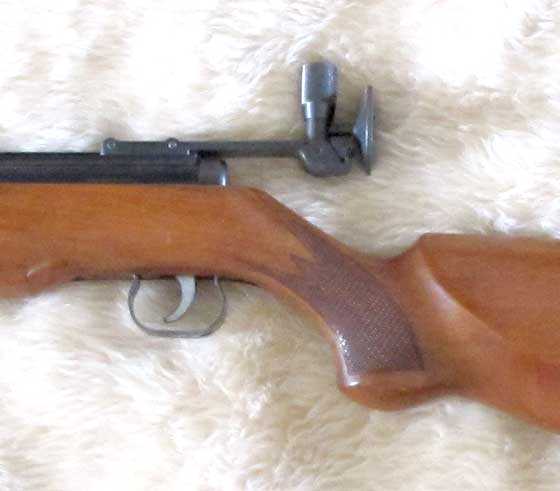 The peep hangs way off the back of the spring tube.

I went to the Chambers website and discovered there is a ring or aperture front sight element available for the S54 for under $5. So I ordered one. I may tune the rifle before I test that element — I’m undecided right now.

I discovered something while doing this work. The front sight was not loose on the rifle after all. The hood that covers it was what was loose. The sight element and the sight base were both tight. However, the entire rear sight was slightly loose, so mounting this peep sight might actually give better accuracy right from the start. Why don’t we see?

I shot at 10 meters off a sandbag rest with the artillery hold. My off hand was at the cocking slot that, on the S54, is so short that the entire slot fits in my palm.

First to be tried were the H&N Finale Match High Speed target pellets that are no longer available. We know from the Part 3 test that they were the most accurate of the pellets that were tested.

I had to sight in first, but the first pellet landed just outside the black, and two shots later I was finished. My 5-shot group then measured 0.446-inches, which is larger than last time (0.232-inches) but good enough for today. 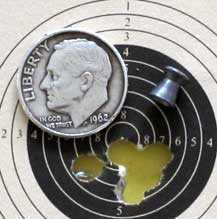 The real test was the Finale Match Light pellet that I hadn’t tested in this gun yet. I hoped they would at least equal what the lighter High Speed pellets were doing. And they did! On the first try, five pellets went into 0.399-inches at 10 meters. I was happy with this group but knew I could do even better, so I adjusted the peep sight down by three clicks and shot a second group. 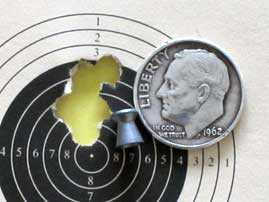 The second group was shot with my complete concentration — the same as I would give during a match. This time 5 pellets went into 0.192-inches at 10 meters. The new pellet can shoot in the S54! 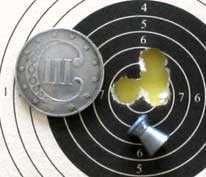 Yes, this 0.192-inch group is worthy of the trime (a 14mm American silver coin from the mid-19th century)! The H&N Finale Match Light pellets can shoot in the BSF S54!

I’m not saying that the new H&N pellets are more accurate than the obsolete ones. I haven’t shot them enough to know that. I’m just saying they will do.

In case you are wondering why my last group is so much better, it represents what I am really capable of when I concentrate. I used to shoot that well all the time 25 years ago, but, since I don’t practice every day, I cannot maintain that level of concentration without willing it for a short period. Harry Pope, who was a former world-champion Schuetzen shooter, said, when he was older, “I can still pull a center when I have to.” That’s how I feel, as well.

The new peep sight doesn’t make this rifle any more accurate — it makes it easier for me to be accurate with it. I’m still balancing a bull on top of a bead in the “snowman” hold, which is less than optimum. However, that last group is better accuracy than I thought this rifle capable of. It’s nearly as good as a modern 10-meter rifle in my hands. Sure, it was partly luck, but I’ll be shooting this rifle again, so then perhaps we will see how much was luck and how much was the rifle.

I have a real target-type front sight coming, and I now have this nice peep on the back. The next thing to do with this rifle is a teardown and lube with Tune in a Tube to make everything super smooth. Then I will try her again.