A little more of the BSF Story

Bayerische Sportwaffen Fabrik (BSF) was established in 1935. They made some airguns before WW II, but after the war is when they really got going. They were located in Erlangen, a town that’s about 15 kilometers from Nuremberg, but today is more like a suburb.

BSF airgun models ranged from youth guns to serious adult guns. Their lowest model was called the Junior that was a plain-Jane youth breakbarrel. Above that the Media came next. It shared a few parts with the Junior like the trigger but it was longer, heavier and more powerful. Think of them as the Diana 23/25.

BSF also made a pistol called the S20 that, at first sight, appears to be nothing more than a youth rifle with a shorter barrel, sitting in a one-piece pistol grip stock. But when we tested one several years ago we discovered that it is really quite well developed and tame to shoot.

The Wischo KG Wilsker Und Co sporting goods distributing and export company was also situated in Erlangen, and many BSF airguns left Germany under their Wischo brand name. In the U.S., BSF airguns were imported and sold by Air Rifle Headquarters and Beeman, sometimes acquiring an association with them in the process, though ARH sold them as Wischo models. In the literature that I have, the BSF name isn’t mentioned, though they did mention Bayerische and the city of Erlangen.

Moving up the food chain the model 20 rifle was next, followed by the models 30, 35, 45,50, 55, 60, 70 and 80. Models 55 through 80 are all based on the same powerplant but get upgrades as the numbers rise. There are several variations of most of these models that have different stocks, sights and accessories.

That only leaves the model S54 that I have told you was the high water mark for BSF. Reader Lain from the UK pointed me to John Walter’s first edition of The Airgun Book that was published in the U.S. in 1981, and it mentions four variations — a plain S54 sporter, the same sporter with a walnut stock, the Bayern and the S54 Match. He also mentioned a fifth variation called the Sport that was produced just before the company ceased doing business in the 1980s. That one was similar to the Bayern but had a deeper pistol grip and forearm and no checkering. This is the first I have heard of that model and I think they must be pretty rare in this country, if not in Europe.

Today we look at the velocity of the rifle. I already have some good data from the test I did back in 2015. I know that RWS Superpoints average 679 f.p.s. with a 18 f.p.s. spread. Falcon pellets from Air Arms average 715 f.p.s. with a 22 f.p.s. spread. RWS Diabolo Basic pellets average 711 f.p.s. which is slower than the 7.33 grain Falcons. I put that down to the loading tap. If a pellet is too light the air blast through the tap will blow it into the barrel and out of the gun before the skirt has time to expand and seal the bore.

Today I will test the velocity with a few different pellets. I’ll also fire a couple shots with one of the previous pellets, probably the Superpoints, to see if the gun is still performing where it was 4 years ago. Before I do, though, there is something I want to show you.

Let’s look at the front sight. On the S54 it’s both different and a little complex. It screams 1950s technology and suggests interchangeability, To show it to you I had to disassemble it.

That’s a sound you never want to hear while working on a vintage airgun. It means that a spring you had not anticipated has seen its chance for freedom and gone over the wall. Where there are springs there are parts in front of them, so they go, too — so fast you never see them. You only hear the dreaded BINK!

I said a quick prayer and got on my hands and knees with a powerful flashlight and a powerful magnet. The magnet will attract the small parts and the flashlight will show them when it is shined at a grazing angle across the floor. Fortunately this happened in my kitchen where the floor is tile and, despite what you might imagine, relatively clean.

I found the plunger that holds the sight element in less than 5 minutes. The little spring that I never saw but knew had to be there was harder to locate. Remember how I said God sometimes laughs? Well, this time He probably gathered a crowd to watch me scoot around the kitchen floor on my hands and knees. So — where was that little spring? In the last place I looked (of course) — sitting in the middle of the chair next to where I was standing! I mean dead center! I found it with my eyes! Couldn’t believe it, so I took a picture for you. I’ve had springs and parts pop into the pockets of my work apron before, but never land on the chair next to me! 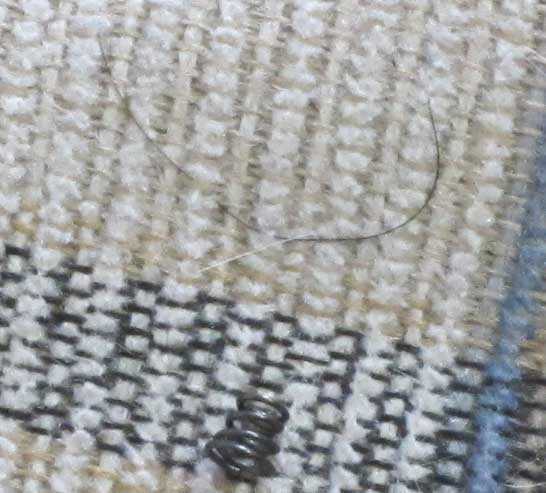 Yep, there it is. That’s a black cat hair above it that I left in the picture for scale. 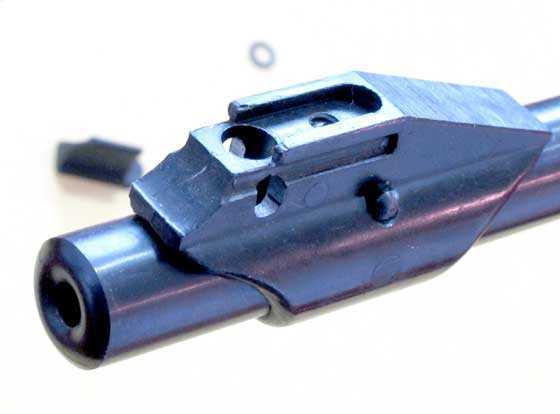 The front sight with everything off. 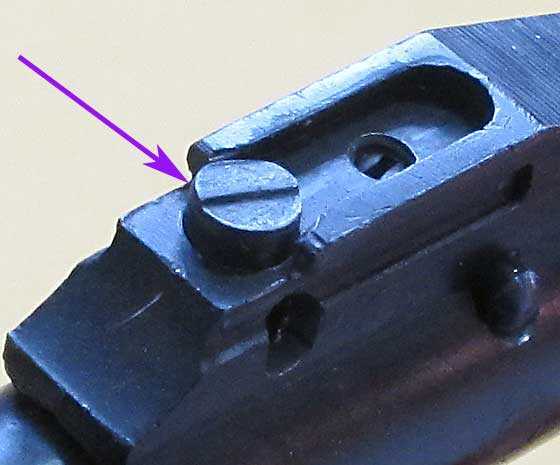 The plunger (arrow) has the little spring underneath. You can see the step in the plunger that stops the front sight insert from coming out. 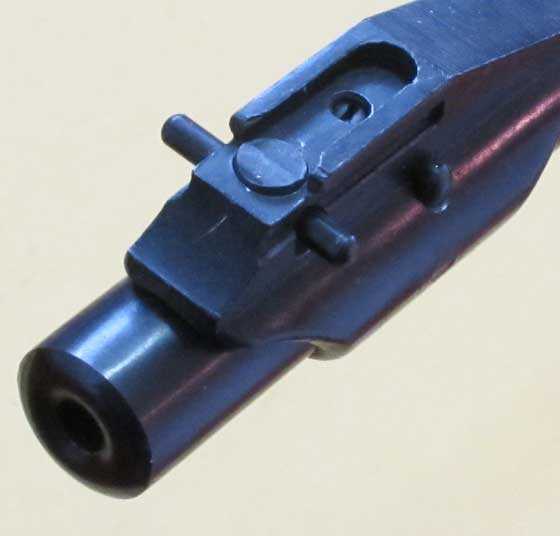 The plunger is correctly installed with the step to prevent the sight insert from walking forward. 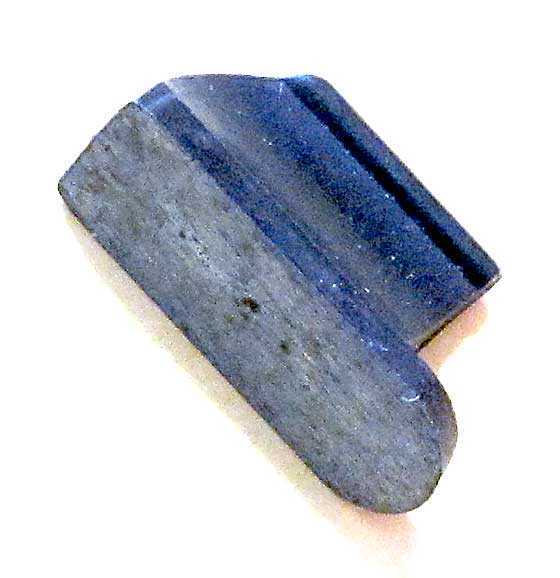 Here we see the underside of the front sight insert. It’s perfectly flat to slide into the sight base and the stepped plunger butts agains the flat end to hold it in. 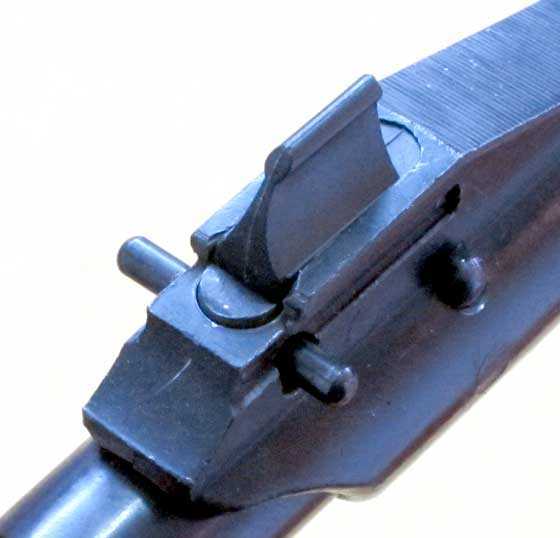 The sight insert is installed and the plunger holds it tight. 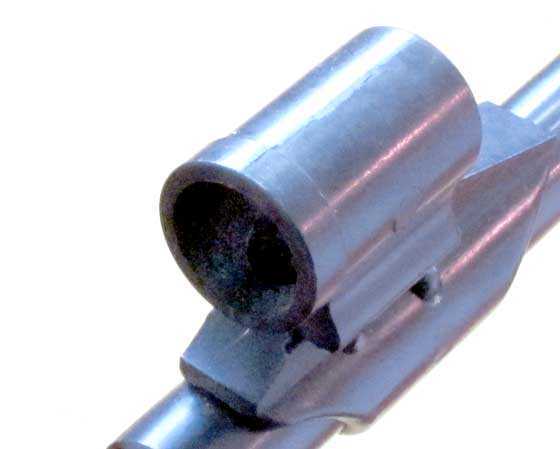 With the hood on the front sight is complete.

Reader Ridge Runner said he thought this front sight had interchangeable inserts, and, looking at the construction, I think he’s right. Why else make the sight element so easy to remove?

Next I tried 10 JSB Exact RS pellets. Though they weigh 7.33 grains, they are almost as fast as the lighter Finale Match High Speed They averaged 714 f.p.s. with a spread that went from 707 to 722 f.p.s. That’s just 15 f.p.s. between the low and the high, which is a lot more like what we’re after!

The final pellet I tested was the Sig Match Ballistic Alloy pellet that wasn’t around the last time I tested this rifle. We know from past tests that this lead-free target pellet can be astonishingly accurate. Being made from pure tin, it is also light, at just 5.25 grains in .177 caliber. Ten of them averaged 857 f.p.s. in the S54, but get this — the spread went from 854 to 860 f.p.s. — only 6 f.p.s.! That is incredible. I have to test this pellet for accuracy!

Superpoints for the proof

In 2015 RWS Superpoints averaged 679 f.p.s. After the regular velocity testing this time I fired two Superpoints and got 680 and 683 f.p.s. I’d call that right on the money.

For a spring gun of the 1950s to ’80s this S54 Match is relatively smooth. However — in a world where Tune in a Tube exists, it’s a buzzing jackhammer! Sorry, guys, but the memory of Michael’s Diana 27 is still with me. I probably need to look inside this rifle at some point.

When I tested the cocking effort in 2015 it was 37 lbs. This time it was 32 lbs. The only thing I can think of to explain the difference is the gun is new and has broken in just a bit from all the testing.

I’m actually looking forward to testing this rifle again, to see whether new pellets will improve the accuracy. It’s not an airgun I shoot every day, but she’s a fine old lady who deserves my attention from time to time. 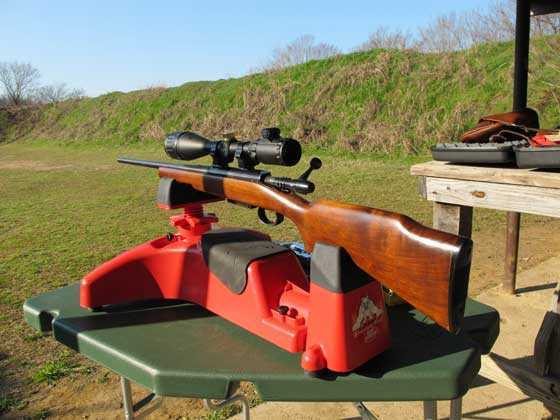 How to mount a scope: Part 2