I’m starting a report on the BSF S54 target rifle today. I reviewed this rifle 4 years ago, but I want to look at it more thoroughly this time.

Bayerische Sportwaffen Fabrik (Bavarian Sporting Weapons Manufacturer) or BSF, as it was known, operated for several decades, both before and after World War II. They were based in Erlangen, Germany, a suburb of Nuremberg. The guns they made were approximately equivalent in quality to Dianas, though in some respects like power they were ahead for a few years. It was BSF that first broke the 800 f.p.s. barrier with their model S55/S60/S70 breakbarrel. I group those models because they were all the same except for their stocks — kind of like the S54 we are looking at today.

They remained at the forefront of the airgun horsepower races throughout the late 1970s and into the early ’80s until the Beeman R1 buried the field. Then, in the late 1980s, they quietly left the market. I have reported on their models 55, 70, and even on the S54 in the past, but that was before the historical airgun section began.

I have often marveled at the irony of me discovering precision adult airguns while living in Erlangen, Germany, from 1974 to the end of 1977. I bought a Diana model 10 target pistol (in Rothenberg ob der Tauber) and started my fascination with airguns while living in the same town where BSF was headquartered! However, in a most ironic turn of fate, I hadn’t a clue they were there until many years after I had returned to the United States. Oh, the humanity!

The S54 was the flagship rifle from BSF. It wasn’t their most powerful, but it was certainly their fanciest! It’s 45.5 inches long with a 19-inch barrel. The pull is 13.75-inches, which is very long for a target rifle. And, the big gun weighs 8 lbs. 12 oz. The stock is round and full in all its dimensions. You know you’re holding something when this one is in your hands!

There are many interesting things I want to tell you about BSF airguns, and I guess I will begin with their triggers that are a novel approach to manufacturing cost controls in the 1950s. They used plates stamped from sheetmetal and riveted together in a block in place of machined parts. As long as the stampings were precise, the product was good. They weren’t the only airgun company doing this, though. It was a popular way of avoiding costly machining operations. 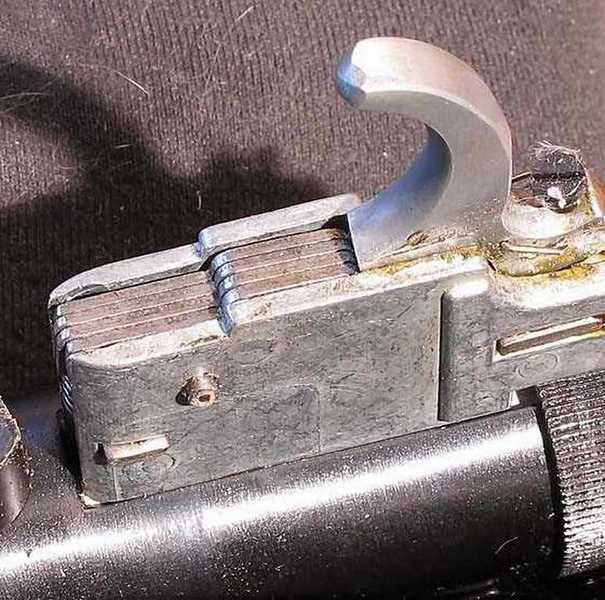 This trigger is from a BSF S70, but it is the same as the trigger on the S54. Four stamped plates riveted together take the place of one machined piece of steel. 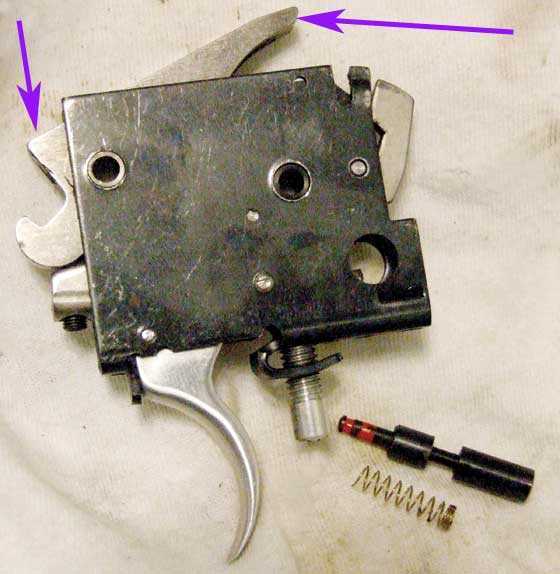 The Rekord trigger has a machined piston release (arrows). It’s a more flexible trigger than the one found in BSF rifles, but it costs much more to build.

One problem with BSF triggers is they get lighter as they wear in. This apparently never stops because I have had triggers so light that the guns fired on their own without touching the trigger blade. That means the sear is slowly slipping while the gun is cocked. Dr. Beeman cautioned tuners to not use moly on triggers, and, in the case of BSF triggers, I must agree.

Three variations of the S54

Before I get to the next difference about the S54 you need to know that there are three variations of the same model. The basic rifle is called the Standard and is recognized by its plain wood stock that may be walnut and has a European finger groove running along both sides of the forearm. It has no checkering or cheekpiece and the comb is straight. The sights are sporting sights like you see on my rifle at the top of this report. I will talk about them more in a future report. The rest of the barreled action is identical to that of the other two variations.

The BSF S54 Standard was a plain-Jane sporter.

The second variation is called the Bayern, which means Bavaria in German. Its walnut stock is hand-checkered at the pistol grip and on both sides of the forearm. The comb is straight and there is a Bavarian-style raised cheekpiece on the left side of the butt. The sights are the same sporting sights as those seen above. This would be the deluxe version of the sporting model.

The BSF S54 Bayern was the deluxe variation of the sporting rifle.

The third variation is called the S54Match. That’s the gun I am testing for you. It has a walnut stock with a raised cheekpiece on the left side of the butt and a Monte Carlo comb. The pistol grip and forearm are both hand-checkered and on the forearm the area covered by checkering is larger than on the Bayern. That may have varied over the years, as I have seen Bayerns with the same amount of checkering as this rifle has, and that includes the one just pictured. The pistol grip of the Match rifle is rounded on the bottom. The butt plate is aluminum, where the other two have plastic plates.

The most outstanding feature of the Match model, however, is its diopter rear sight. I had a diopter on my other S54. It had a large rear disk that was about 2 inches in diameter. But there is another diopter that has an exceptionally large disk. It is perhaps 3 or more inches in diameter. That one attracts attention from all shooters. I once had a guy tell me he paid as much for that sight as he did for his entire rifle. My Match rifle is missing its diopter sight, so I’m on the hunt for one. 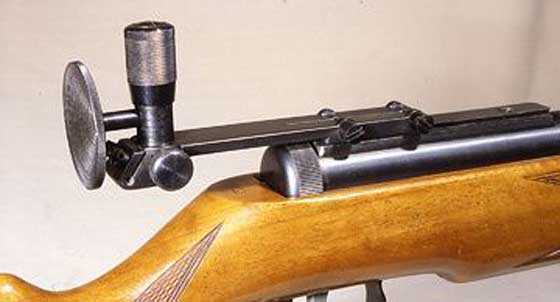 The Match S54 came with this aperture sight.

The Blue Book of Airguns says that the Bayern model came with the rear aperture sight, but I haven’t seen any BSF literature to support that. It was probably an option and perhaps some retail company catalog showed it that way, but BSF literature puts the target sight on the Match model, only.

The Blue Book also lists a Deluxe model that has the identical features of the Match gun shown here. But I will show you proof that BSF just referred to this as the Match model. I don’t know where the Deluxe model comes in, as I have never seen any original BSF literature referring to it. It may have been something that happened near the end of the run in the mid-1980s.

Here is my proof that BSF calls this model the Match and not a Deluxe. I have the original hang tag that’s serial-numbered to this gun! That’s rarer than the big diopter sight! 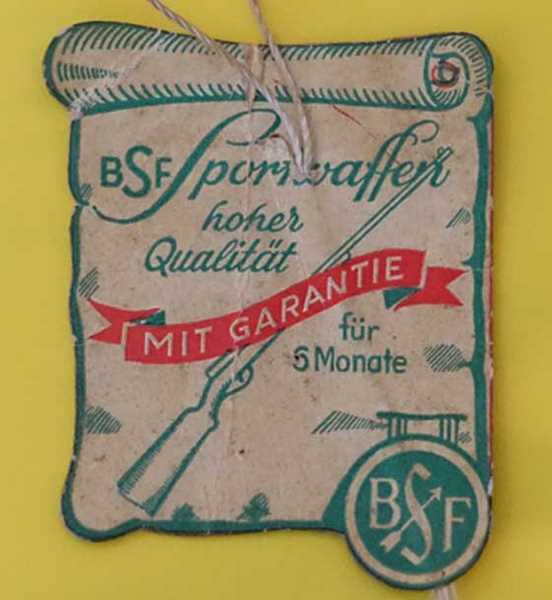 My rifle came with the original hang tag. 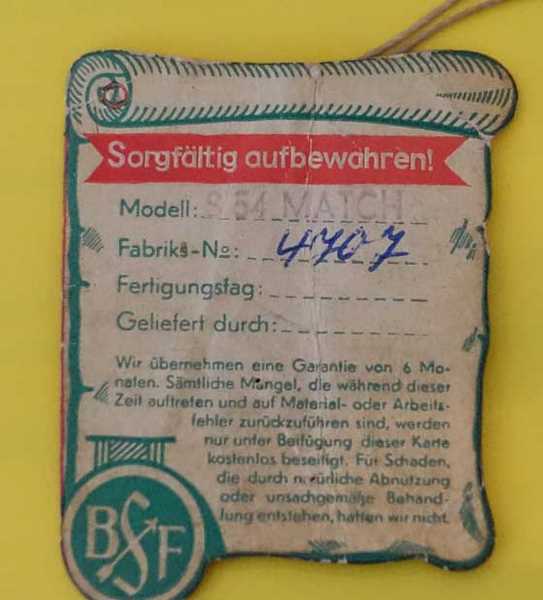 The hang tag is serial-numbered to my rifle. Notice it is called an S54 Match.

You can see from the first picture that the S54 is an underlever rifle. Its underlever is formed from a thick piece of sheet steel that appears machined until you examine it closely. It’s actually folded into a long round rod. That does save weight over a solid steel rod — a lot, in fact. The handle of the lever is knurled around its circumference and is spring-loaded. To cock the rifle you pull back on the handle to release it from a fixed ball catch in front. The rifle then cocks like any other underlever.

When its cocked the underlever comes down this far.

There is no safety nor any anti beartrap device, so hang onto that underlever all the while its down. However, your fingers won’t be in any danger when you load because the S54 has a loading tap. It doesn’t open automatically when the rifle is cocked like many taps do. It must be opened manually to load a pellet. Once open simply drop a pellet into the tap nose-first then pull the lever back to rotate it closed. The rifle is then loaded. 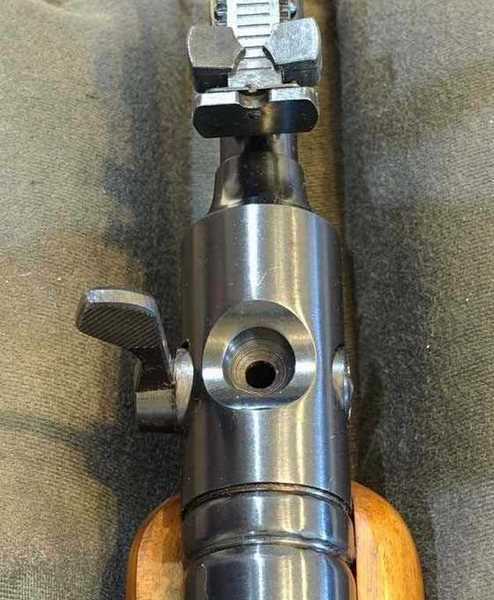 Drop a pellet nose-first into the loading tap, then rotate the tap closed to load the rifle.

Serious target rifles don’t use loading taps. When a gun with a tap fires, the pellet is blown into the rifling by the force of the air coming from the compression chamber through the tap. That’s not conducive to accuracy, so target rifles don’t usually use one. The Haenel models 311, 312 and 550 all have taps, but they are not considered to be serious 10-meter target rifles.

There is a lot more to tell but I will weave the rest into the future reports. This big BSF S54 is a real wonder in the airgun world. As reader RidgeRunner would tell you, the quality simply exudes from the gun. The last time I tested it I promised to shoot it with an optical sight, so when we get to that point it will receive the UTG Micro Reflex dot sight that Pyramyd Air now carries.

I make no promises but I’m thinking about a possible tuneup. This one has a little vibration and way too much velocity, so I may just look inside.