A couple readers guessed that yesterday’s report was the start of the Ruger 10/22 Air Rifle. That’s point number one. This is a real Ruger Air Rifle. It’s branded that way, which means that no Ruger collection is complete without one. I have seen Ruger collectors pay thousands of dollars for rare examples of Ruger guns, including an unfired .256 Winchester Magnum Ruger Hawkeye that went for more than $3,000. Quite a lot for a single-shot pistol, wouldn’t you say?

Let’s address the elephant in the room. This isn’t the first 10/22 air rifle lookalike we’ve seen. Crosman’s 1077 is meant to copy the 10/22, and of course their Benjamin Wildfire is the same gun using high pressure air. Both rifles resemble the 10/22 but also have differences — particularly in the magazine area. Having said that, I don’t want to continue to make comparisons — it isn’t my style.

This air rifle mimics the 10/22 firearm closely. The air rifle weighs 4 pounds 8 ounces while the firearm weighs 5 pounds 6 ounces — with both guns unloaded. The air rifle’s weight is biased towards the butt.

The air rifle is a 10-shot double action repeater. It operates on two 12-gram CO2 cartridges.

I was surprised at this year’s SHOT Show when I looked at the air rifle magazine to see that it was a very close copy of the firearm mag. 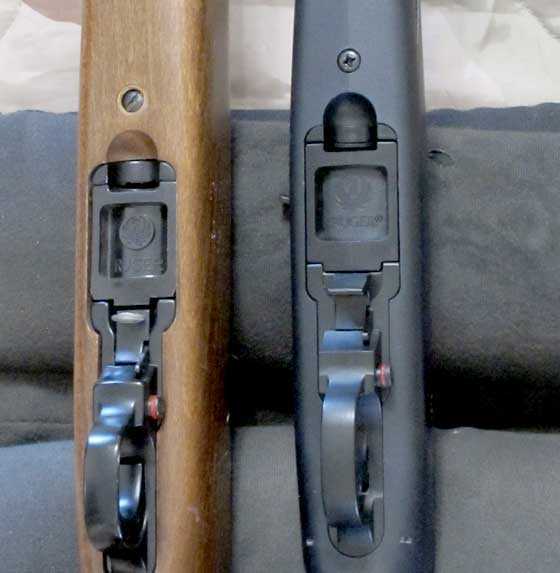 My 10/22 (left) had the mag release mod done to it. Ruger makes them that way now. The scallop at the top is for the finger to pry out the mag. 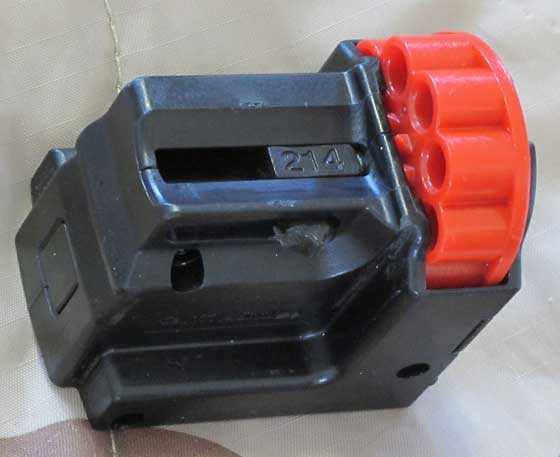 The mag box looks very much like a Ruger 10/22 firearm mag.

The 10/22 magazine release was a sore point for many years. It sat flush with the bottom of the stock and had to be pressed in against a strong spring, making it hard to operate. A common “fix” was to thread something like a thumbscrew into the front of the mag release to give you something to push on. Ruger has since incorporated this into their design and the mag release they make today is easy to operate. Thankfully the air rifle faithfully used that version! 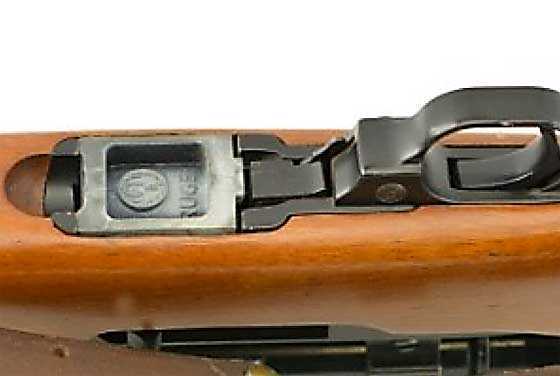 This earlier 10/22 mag release had no extension and was difficult to operate.

I detest comparing one gun to another unless they are supposed to be alike — like this one. When put side-by-side, the resemblance and attention to detail of the air rifle is remarkable. Even Ruger has commented on it, and they would be the most critical of all.

The Ruger Air Rifle (bottom) is a faithful replica of the .22 firearm.

The Lord bless Umarex and Ruger — these sights are not fiberoptic! Hurrah! The air rifle has a gold bead up front (shades of 1950!) and the rear is a double notch that folds flat. That combination allows you to draw a fine bead in the lower notch or a coarse bead that’s flush with the top. Why — you would think that someone at Ruger is an actual rifleman, and someone at Umarex knows what is important to real shooters! 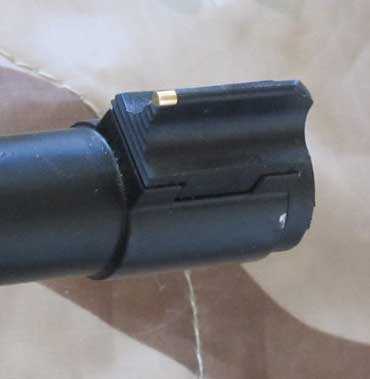 Now, that is a front sight for an air rifle! Good job, Umarex! 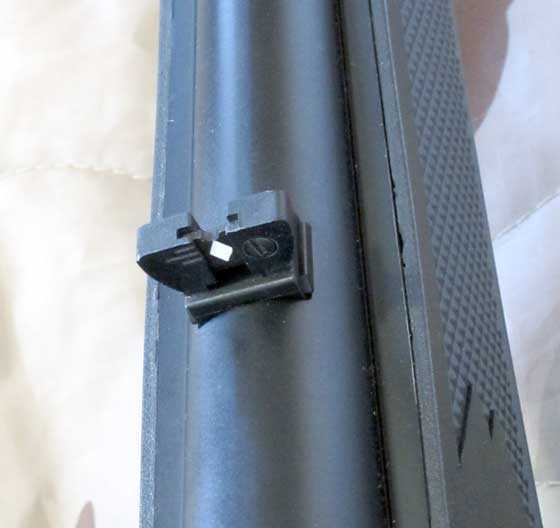 The rear sight is a perfect copy of the firearm sight. I wonder if it isn’t one?

Four holes are drilled and tapped in the air rifle receiver for the installation of Weaver bases — just like they are on the firearm. This is why the rear sight folds flat — so you don’t have to take it off to mount a low scope. 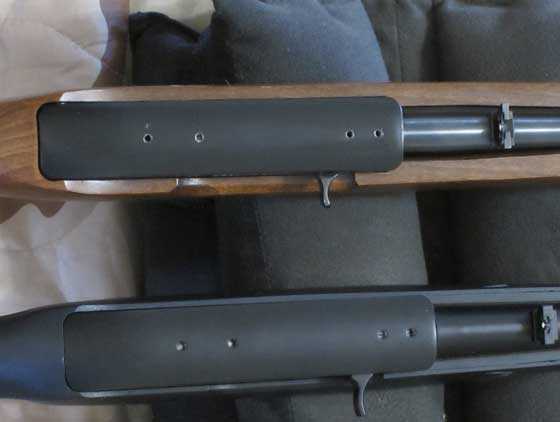 Even the tops of the receivers are identical. Drilled and tapped for scope bases. Any 10/22 base will fit the air rifle.

Umarex sent me the Weaver bases for this rifle (they are the regular 10/22 bases) and an Axeon R47 dot sight to mount on the rifle for a little more juice in my test. I will also tell you how that sight works, though Pyramyd Air doesn’t carry it at this time.

Something unique to the air rifle is how the trigger works. If you want to shoot rapidly, just pull the trigger and all 12 shots in the magazine are available double action. That mode both cocks the striker and advances the magazine, so the pull is long and hard — the specs say 10 pounds.

However, you can manually cock the bolt, which makes the trigger single-stage with a lighter and crisper pull that the specs say is 3 pounds. I have tried it several times and it is both lighter and crisper, but I will test both of these for you.

The 10/22 Air Rifle uses 2 12-gram CO2 cartridges that are inserted in-line into the butt. The buttplate comes off easily with a quarter-turn of a large spring-loaded screw. 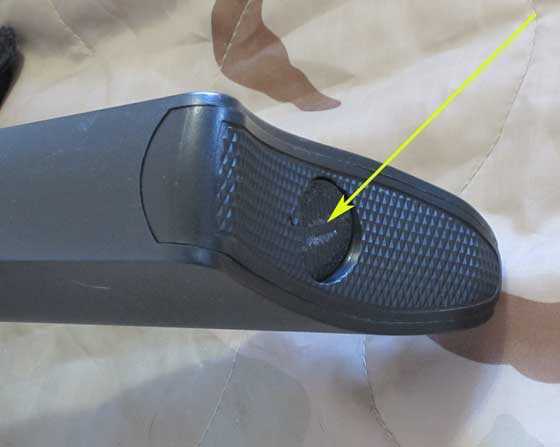 A coin turns the captive butt plate screw (arrow) a quarter turn and the plate comes off to load CO2. 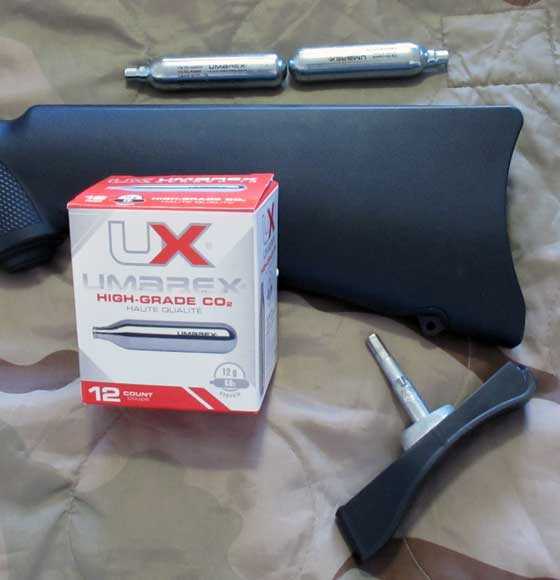 With the butt plate removed you can install the CO2 cartridges. They go in as you see them positioned above the rifle.

The specs say to expect velocities in the 650 f.p.s. range. That’s just what I would predict for a CO2 rifle like this. You know I will test it for you.

The one control that’s not functional on the airgun is the bolt release lever. On the rifle you can lock the bolt open (it doesn’t automatically lock open after the last shot) with this lever. To release the bolt, simply pull back slightly on the bolt handle to release the lock and the bolt goes forward again.

There are things I didn’t get to yet, so Part 3 will have to include them. This is an exciting new air rifle. I sure hope it’s accurate!

The rifle should be available in June, according to what I was told by Umarex USA. I know the Pyramyd Air website says earlier, but these things change constantly, as information comes in. 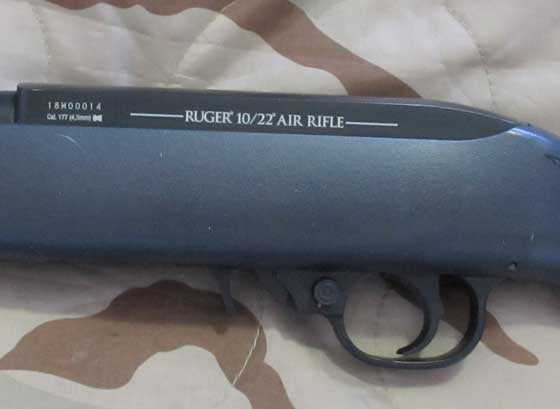