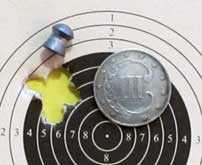 Well, RidgeRunner — this one’s for you! Today we look at the AirForce Edge target rifle that reader RidgeRunner had Lloyd Sykes modify into a fancy plinking/sport air rifle. Lloyd boosted the power at the cost of 3/4 of the shots, by adding an air chamber after the built-in regulator. It is an elegant solution!

A normal Edge set up for target work gets about 110 shots from its tiny reservoir. This one gets 25. A normal Edge shoots target pellets at 500-525 f.p.s. This one shoots heavier RWS Meisterkugeln rifle pellets at an average of 713 f.p.s. (estimate — read Part 2 of this report) for 9.31 foot-pounds of energy at the muzzle.

I installed a brand new .177-caliber 18-inch AirForce Lothar Walther barrel in this Edge to test RidgeRunner’s theory that the longer barrel would boost the power to 12 foot-pounds. Shooting the same 8.2-grain RWS Meisterkugeln Rifles pellets through the 18-inch barrel we get an average velocity of 813 f.p.s. Yep — it’s exactly 100 f.p.s. faster. That’s good for 12.04 foot-pounds. Talk about spot-on! Ridgerunner — you nailed it!

Of course it will get even more power if I shoot a heavier pellet. A 16.2-grain JSB Beast averaged 653 f.p.s. for a muzzle energy of 15.34 foot-pounds! That’s taking this 6 foot-pound target rifle into territory it’s never seen!

As I was testing the Beast I noticed the velocity was dropping too fast for the number of shots fired. I couldn’t hear a leak, but by wetting my lips and holding them close to the valve I could feel it. I wanted to shoot some groups at 25 yards, as well, but by the next morning all the air had leaked out of the tank. This rifle has been together since the Edge first came out in 2009 (this rifle is serial number 10) and this one was modified some time after that. It has been together for many years, so a leak isn’t that surprising.

I was going to convert it back to a straight 10-meter rifle again, so the leak is right where I will be working. It should be easy to find and fix. But I did want to shoot at 25 yards with the 18-inch barrel, so I aired it up and shot one group of JSB Exact RS pellets that were the most accurate in the 12-inch barrel, when I tested the rifle at 25 yards in Part 2.

The 18-inch barrel put 5 JSB Exact RS pellets into a 0.228-inch group. In Part 3 the 12-inch barrel put 5 in 0.219-inches, so the two barrels are equivalent in terms of accuracy. This group appears smaller than the next one, though it’s actually larger. That’s because I used metal tape on the back of the first target shot in April, and you can see the entire hole. On this one the target paper has closed back in the holes. 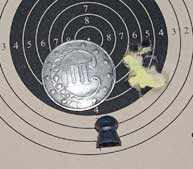 This is the 25-yard group of 5 JSB Exact RS pellets shot from the 12-inch barrel. I show it because I did not adjust the sights from this group to the one above.

I did not sight the Edge in today. I just changed the barrels and shot the group seen above. That speaks pretty well for AirForce consistency!

Not the first test of an 18-inch barrel

Although I said at the start that today’s report is for RidgeRunner, this is not the first time I have tested an Edge with an 18-inch Lothar Walther barrel. I also did it back in 2009/2010, when I first tested the Edge. Let’s look at those results now.

How do velocities compare between the three barrels?

12-inch average — Did not test

These data show that by increasing the barrel length for the standard Edge, the velocity usually increases, but the difference isn’t as dramatic as you see in the test with the firing chamber and 18-inch barrel. The difference is this gun now has more air, and the gun uses all of it, where the first test shown above is with a standard Edge that only stores air inside the valve, itself.

As you can see, having the extra air makes a huge difference! I hope that reinforces what I said in Part 2 about how the additional air speeds up the pellet. The longer barrel gives the air (the little boys) more time to push on the pellet (the car), resulting in more velocity. But having even more air (more little boys) doing the pushing, has a far greater impact.

I’m done testing this modified Edge. Now I want to remove the modifications so I can test it for you as a true 10-meter target rifle. It is possible to purchase an entire Edge Spare Tank and Buttstock Assembly that would allow me to leave the modified tank set up as it is (with the firing chamber). That way I could convert the rifle in seconds. I have to admit that it’s an attractive thought, but old BB is just too awash in airguns to be building kits like that. Maybe 20 years ago; not today.

I remember a time when target rifles like the Edge and Crosman Challenger PCP didn’t exist. I remember the NRA telling the airgun community at the SHOT Show Airgun Breakfast about the size of the Junior Marksmanship Program (more than one million kids involved annually). When they did they awakened many manufacturers who had been sleeping. It was like telling Revlon that many American women wear lipstick — something of which they should have already been aware!

In those days the Daisy 853 was the de rigueur target rifle for America’s junior marksmen. Nobody used anything else. I imagine Daisy didn’t like the NRA spilling the beans about the program to the industry, because of the results that followed. Within 10 years both the Crosman and AirForce rifles came to market. And today there is no longer a Daisy 853. That’s progress, but it can hurt, too.