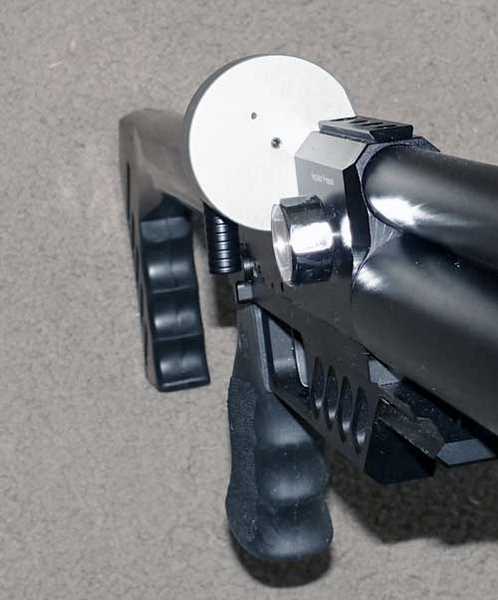 This is an unscheduled test. I looked at the .177-caliber FX Dreamlite and realized that I had been hard on it in past tests. The poor manual (that has since been fixed), the confusing power adjuster (that is not fixed and still confusing) and the rifle’s seeming inability to group with any but a couple selected pellets put me off. But at the root of my bias was the large 21-shot circular magazine that comes with the rifle. Who in their right mind wants 21 shots in a magazine — especially when it makes the mag as large as a dinner plate? That is a rhetorical question. I know there are lots of shooters who want 21 shots in their magazines. But not me.

One reader suggested that I try the 13-shot mag that is sized more normally. Another suggested that I look at a single-shot loading tray. I looked online and, sure enough, both items do exist for the Dreamlite. I ordered them, only to discover that the single-shot tray wan’t available at the time of my order. But I received the 13-shot mag last week.

Then I thought — what if I mounted the new Meopta MeoPro Optika6 3-18X56-scope that I have been testing? It is the most precise and clear scope I own. I actually tried to do that before and discovered the Sportsmatch 30mm high adjustable scope mounts that scope is mounted in do not allow the scope to clear the 21-shot magazine. But they will clear the smaller 13-shot mag, I am sure. I need that mount for this rifle because this Dreamlite is a super-drooper.

The 21-shot magazine sticks up high and requires special consideration when mounting a scope. 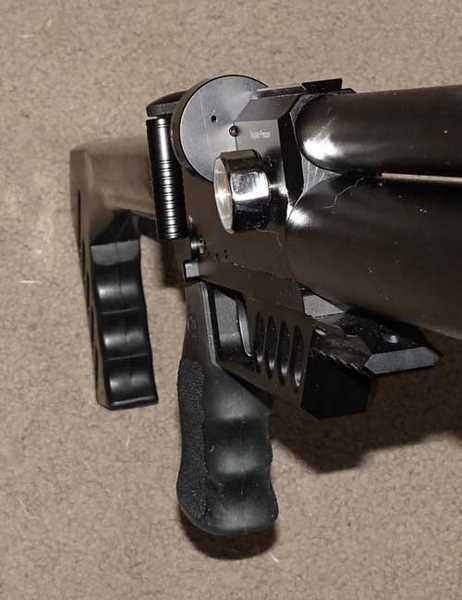 The 13-shot magazine is lower and allows more options for scope mounting. 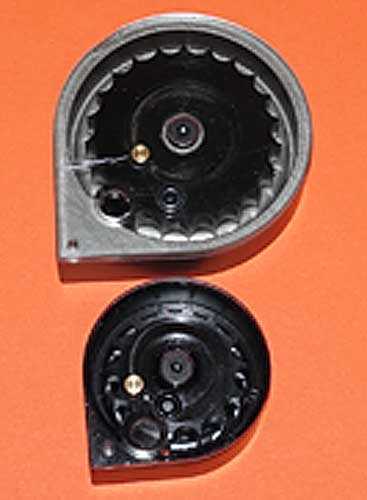 The small and large magazine.

I found when installing the smaller mag that it is so much smaller that it doesn’t touch the bottom of the receiver. It keys on the breech, allowing it to rotate to the right and flop down even lower. This is a clever design that accommodates the dimensions for the larger mag while retaining precision with the smaller one — I hope! 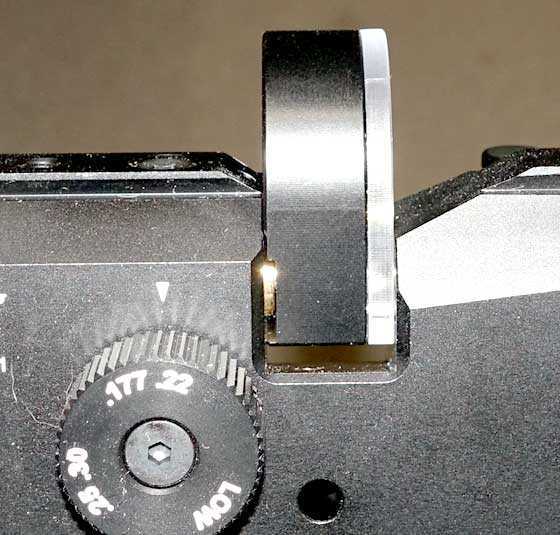 Before I continue, let me tell you why I’m spending this amount of time testing the FX Dreamlite. I am doing it because this rifle has a number of good things going for it. The trigger is a real pleasure to use and the silencer is also very good, though the rifle’s power level is low enough that it isn’t really challenged.

The Dreamlite has an externally adjustable regulator that the user can easily adjust. A second pressure gauge tells where the operating pressure of the regulator is set, so you can adjust the pressure to support how you have the power adjusted. That gives you razor-fine control of the power output at all levels between the two extremes. This is not something to keep tweaking. Find where it wants to be, then leave it there!

The Dreamlite is light! Before it’s scoped it weighs less than 6 pounds. That makes it comfortable to carry.

And finally, in the last report (Part 5) I found that 10.5-grain Crosman Premier Heavy pellets are well-suited to the Smooth Twist II barrel that’s on the rifle. That gives me two good pellets (8.44-grain JSB Exacts are also accurate) for the rifle.

I got a lot of good shots (62) from a full fill of the rifle (250 bar) when the reg is set at 90 bar and the power level is set at maximum. I find that to be very much in the Dreamlite’s favor!

Other than the Smooth Twist barrel being fussy about the pellets it likes (not really bad, just peculiar and something to watch), the only bad thing so far has been the 10th chamber in the 21-shot magazine. I tested that and proved that it hindered accuracy. When I compensated for it, the groups shrank. Well, today I replace that mag with the smaller one that I’m hoping will be just as good and also allow me to mount the Meopta scope.

I mounted the scope quite easily, with much clearance underneath. Then I went to 12 feet to sight it in with the 8.44-grain JSB domes. One shot told me I would be on paper at 25 yards. So I went back to the bench and set up to shoot.

I’m shooting from 25 yards off a sandbag rest. Each group will have 10 shots. If I adjust the scope I’ll tell you. It did turn the illumination on to see the central dot in the reticle more clearly.

I finished the sight-in with two more shots at 25 yards and, since the magazine holds 13 pellets, I shot the first group. The first 10 JSB Exact pellets went into a group that measures 0.503-inches between centers.

As you can see, I shot my aim point away on the 7th shot. After that I had to guess where the center of the bull was. But the highest shot came on number five, and I don’t have an alibi for that. [I really did, but I didn’t know it at this point in the test.]

During this group I notice that the tiny central dot on the illuminated Meopta scope was blinking slowly. That helped me see where it was against the black bull.

I dialed the scope 5 clicks higher in hopes of missing the 10-dot on the next group. I did, but not the way I expected.

The first shot from the second group hit the paper an inch to the right of the aim point. I was surprised and I still don’t know what happened. Apparently the erector tube wanted to go there because the rest of the pellets went to the same place — sort of. The fifth shot hit the paper way higher than the rest and gave me what I’m showing you here — a 1.102-inch group with 8 shots in 0.22-inches. That’s the heart-shaped group in the middle with one shot lower and that other shot way higher. I think I know what happened this time. [I really didn’t know. I found out much later.] 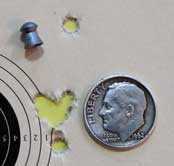 Ten JSB Exacts in 1.102-inches with eight in 0.22-inches. What happened? Two things — one I will explain and the other one had not yet occurred to me.

Remember the blinking central dot in the scope? Well I now noticed that it was perhaps a quarter mil below the dark dot at the center of the reticle. And I was alternating between aiming with the dark central dot and the blinking red dot. I have no way of measuring how far apart the two dots really are. When I say they are a quarter mil apart I’m just guessing. It’s my way of saying they are very close but not quite together.

I tried one more target with the reticle illuminated and swore to use only the blinking red dot.

I adjusted the scope 6 clicks to the left and three clicks up and then shot another group. This 10-shot group measures 0.457-inches between centers and it was the very first shot that went farthest to the left. That blinking dot was still confusing me, so I turned it off in the middle of shooting this group.

Ten JSB Exact pellets went into 0.457-inches at 25 yards. I was still playing with the blinking dot.

I tried shooting a group of RWS Superdomes, but they were horrible. So I switched over to the 10.5-grain Crosman Premier Heavy. I was now using the black dot in the center of the reticle as the aim point and I could see that easily against the white 10-dot on the target.

Now it was time to try the 10.5-grain Crosman Premier Heavy that did so well in Part 5 last time. The first group of ten made a group that measures 0.402-inches between centers at 25 yards. That’s not bad. In fact it’s the best group so far.

The first group of 10 Crosman Premier Heavys was smaller than all the groups before.

By this time I had fired 53 shots and the reservoir was getting low so I refilled the gun to 250 bar. My next group of Crosman Premier Heavys measures 0.424-inches between centers, so it’s not that different than the previous one.

The last group of 10 Premier Heavys measured 0.377-inches between centers, but look at the group of 8 shots on the lower left. Those 8 measure 0.208-inches between centers. I got so excited at seeing those 8 shots group together (the other two are shots number 7 and 10) that I fired the rifle very quickly. And that came back to haunt me.

As I was writing this report and evaluating all of today’s data, I was also reading over the past 5 reports with all the testing I had done. That’s when I discovered something crucial. I had forgotten that this Dreamlite regulator fills very slowly. I didn’t take that into account in today’s testing! Please notice that ALL of my group enlargements are vertical! That often means large velocity differences! I had not waited long enough between shots for the regulator to fill and I cannot discount that for some or all of the vertical stringing we see. I do think the reg is starting to fill faster than it did before, but I should still wait at least 25 seconds between shots for the best results. I did not always do that today.

I am not going to re-run this test. I’m pretty sure I know how this Dreamlite wants to be treated now, and I’ve already spent a lot of time getting to this point. However, for next time there are some things I need to remember.

Next time I want to do one final thing that some readers have asked me to do. The Dreamlite has a short Mil Std 1913 Picatinney rail just forward of the triggerguard and some readers have asked me to shoot a pellet gun with a bipod. Leapers has sent me one of their new TBNR bipods to test. And now that we have a good baseline on this Dreamlite, I think it is the ideal testbed for that bipod, which at $160 is not cheap.

At the present time the best 10-shot group I have gotten with the Dreamlite has been 0.284-inches at 25 yards. Now, THAT is a group (see it in Part 4)! The groups that measure 0.35 and 0.4 are about the same as my TX200 Mark III can do with 10 pellets at the same 25-yards distance, which is what put me off this rifle. You guys know me. If this was a world-beater I would be out in front with my pom-poms! (There is an image you need to scrub from your mind!) If it can really do that (0.284-inches for 10 shots at 25 yards) consistently, I will be impressed. We shall see!