When we left the rifle I told you that it didn’t have a spring guide for the spring that fits between the inner and outer ball bearing cages. These two cages control the movement of the three ball bearings that are fundamentally the sear of the rifle, and that spring is essential to their operation. I could have assembled the rifle with just the spring, because that is how it came to me. But that’s a sloppy job and, since I don’t plan on taking this powerplant apart again, I wanted it to be right.

I ordered the parts (a new cage spring and the spring guide) from T.W. Chambers & Company in the UK on February 20. They arrived on February 26. 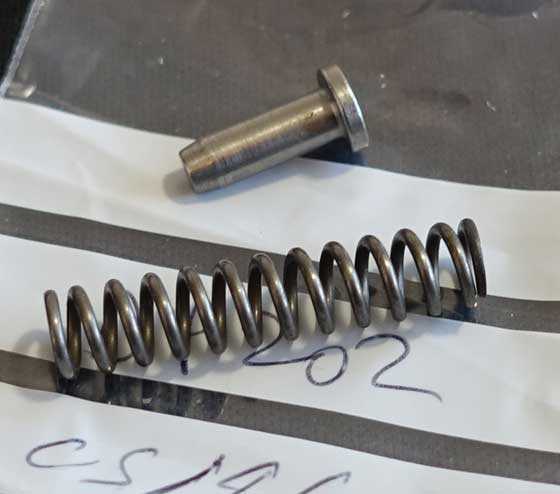 It took me only 15 minutes of actual work to complete the assembly of the rifle, but I took an hour in which to do it. The extra time was for taking pictures and looking at pictures of the gun taken during disassembly as I went. 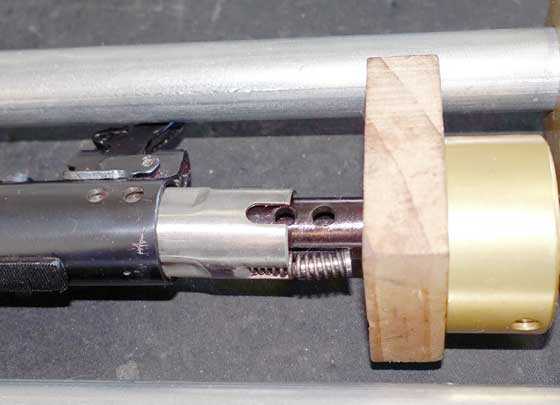 This photo shows the cage spring being compressed as both the inner ball bearing cage and the outer cage are pressed into the spring tube by the mainspring compressor. See the two holes in the black inner cage? The pins that hold the action together pass through them. See the slot at the rear of the silver outer cage? There is another one on the other side. They allow that silver cage to move forward and backward over the inner black cage, which is how the ball bearings get pressed down into the groove in the back end of the piston rod. 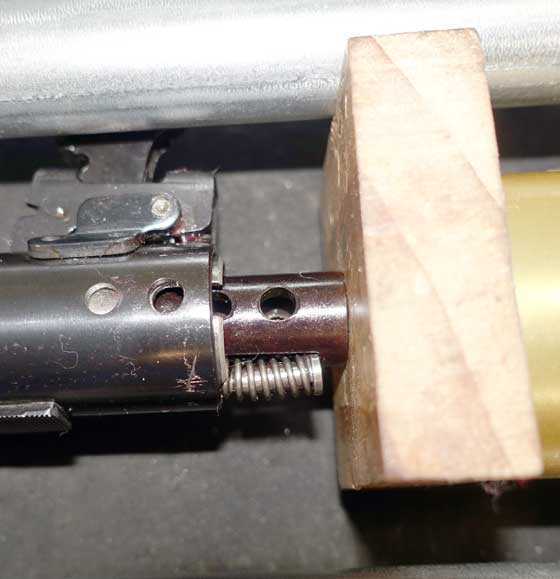 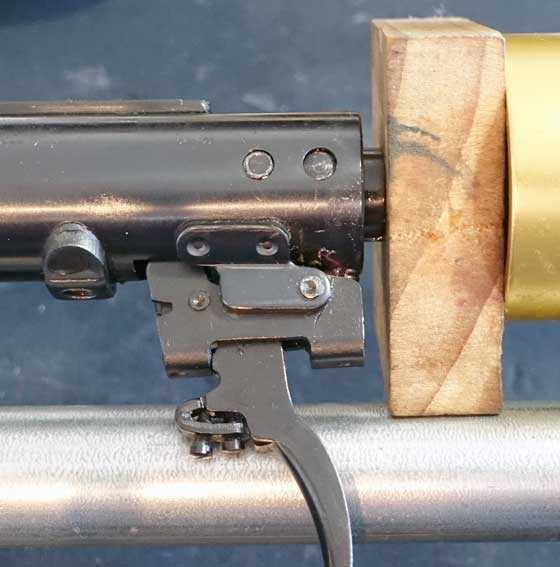 The holes have been aligned and the two pins are in place to hold the action together. See how the black ball bearing cage sticks out of the spring tube a little when the powerplant is together? A steel end cap covers this.

The articulated cocking link makes it possible to insert the end of the link through the spring tube and into the piston  (arrow) without removing the barrel.

I had to examine a photo I took while disassembling the anti-beartrap to figure out how the parts are supposed to go. 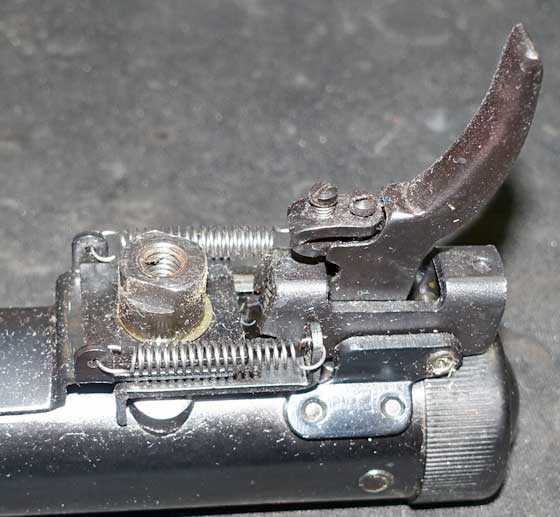 This picture was taken before I disassembled the anti-beartrap mechanism. It’s dusty, but it provided the detail I needed to assemble the beartrap after the powerplant was together. 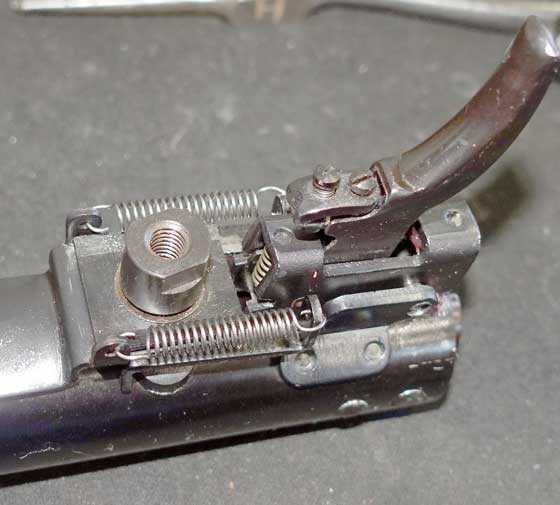 After cleaning all the parts the anti-beartrap mechanism looks much better!

After that the barreled action went back into the stock. It was now time to see if I got it right.

Back in my office I cocked the rifle that did seem much smoother than before. Remember I removed the barrel and lubed the base block washers and pivot bolt with moly paste. I also oiled every joint in the cocking linkage.

Then I loaded a .177 caliber pellet and fired the rifle into my pellet trap. Success! And now the rifle feels dead calm, which was what I was after. It was quite buzzy when I started.

I only put a thin coat of TIAT on the mainspring. I put it on a week ago and never added more. In fact none of the parts I lubricated a week ago needed any more grease today. The parts have been stored in plastic bags, including the open barreled action.

I did put a thin coat of TIAT on the new trigger cage spring and spring guide, but that was as much to hold the parts in place as it was to lubricate them. That TIAT is fantastic! In fact I dropped the black inner cage twice on my tile kitchen floor with the ball bearings inside and they never moved. TIAT held them in place.

And now for the big test. Since nothing has been changed, other than to clean and lubricate the parts in this Diana 27S, and since we have good pre-lubrication velocity data available, it is possible to determine what affect lubing with TIAT has had on velocity.

It is important to remember that in Part 3 I replaced the breech seal with a new one. We saw a large increase in velocity from that. The pre-lubrication velocities I will be giving are those obtained after the breech seal was replaced.

Before the tuneup the 27S cocked with 24 lbs. of effort. After the tune it cocked with the same 24 lbs.

In this rifle it appears that Tune in a Tube has reduced the average velocity by 22-25 f.p.s. The consistency increased dramatically with two of the three pellets and only decreased by 4 f.p.s. with the other.

The firing behavior before the tune was buzzy with a strong forward jolt. After the tune the jolt seems quicker and lighter and there is absolutely no vibration from the powerplant. I could not be happier!

It is important to note that neither the anti-beartrap mechanism nor the trigger need to be removed to disassemble the powerplant for replacing the mainspring, the piston or the piston seal. Almost all the work I did in this report could have been done with the anti-beartrap mechanism and trigger left alone. I strongly advise that you leave the trigger alone unless there is a compelling reason to take it out.

This has been an interesting project so far. Now it remains to see how accurate the 27S is. I will try the open sights first and then mount a Diana peep sight for a final test. Not all Dianas have a peep sight base, but this one does and I thought I’d take advantage of it.