Today is Part 2 of my test of the vintage Diana 27S. From the comments to Part 1 we learned that several of you own them, but you all seem to live in Europe and the UK. This model is very rare in the U.S. Today’s report is about a failure that turned out to be a huge success!

“Oh, oh! BB’s talking like Mr. Miyagi again! Better get out the rags and car wax!”

I normally test velocity on Day 2 and that is exactly what I intended to do. My guess was that a .177-caliber Diana 27 should shoot around 650 f.p.s. with lighter pellets when it’s in good condition. I put five drops of Crosman Pellgunoil down the air transfer port that is located behind the barrel when it’s closed and then I shot three shots to just spread the oil around. Normally I would cock and uncock the rifle to spread the oil, but we learned in Part 1 that the 27S has an anti-beartrap device that prevents uncocking except by firing.

The oil proved to be a happy accident because of what happened next. The first recorded shot with an Air Arms Falcon dome went out the muzzle at 542 f.p.s. That’s a little slow but I can work with it. However, the next 5 shots went like this.

Wow! This rifle is way off where I expected it to be. But remember that happy accident I mentioned with the oil? It came out as a mist on the first shot, which was a diesel. I saw oil mist shoot out the muzzle and also around the breech. Ah HA! The breech seal is weak.

And here is the first bit of knowledge. The breech seal did not appear to be bad. It was just a little flat, but well within tolerances for a normal o-ring seal. But when I removed it I discovered it was as hard as a rock! It was flat but also immovable — allowing compressed air to rush around it. An o-ring in the breech should push forward when compressed air gets underneath it and lifts it to seal against the breech tightly. This one wasn’t moving. As long as the breech was dry I couldn’t see the air squirting out, but that oil mist made it instantly visible.

Well I am the great B.B. Pelletier, and a couple months ago I ordered a huge assortment of o-rings in both SAE and metric sizes. I’ll get this little puppy back on track in no time.

Knowing that the German manufacturers had used metric o-rings, I looked through my huge assortment — only to discover that I didn’t have the size metric ring I needed. Knowledge number two is — a huge assortment of o-rings doesn’t contain rings of all sizes. Fate conspires to ensure that the size you need is not in the box! That’s the same Fate that hides one of each pair of your sox in the dryer.

But Fate was dealing with BB Pelletier this time and I had a second huge box of SAE o-rings, as well. I would find one that’s the perfect size and laugh at Fate who thought that, just because it isn’t labeled as metric, I wouldn’t know I had one that fit!

BB has a backup

What Fate didn’t know was B.B. has a stash of odd-sized o-rings that he has collected over the years. I brought them out and, wouldn’t you know it, those that were thick enough were the wrong size and those that were the right size were too thin.

Then Fate’s prettier sister, Luck, stepped in. Because, among my collection of odd-sized o-rings, was one leather breech seal I had made years ago — probably for another Diana rifle. It wasn’t as thick as it needs to be and also was not as well-formed as I would like which is why I never used it, but it was the right diameter. So I installed it and tested the rifle again — still shooting the Falcon pellet. Here is what I got.

Wow! A three-hundred f.p.s. boost — just from having a tight breech seal! But what about the last two shots? I think the leather, which was the right diameter but not the right thickness, got pushed back and flattened out too much, then started leaking air again. I could shim it up and get it to work, but I was after something more refined. 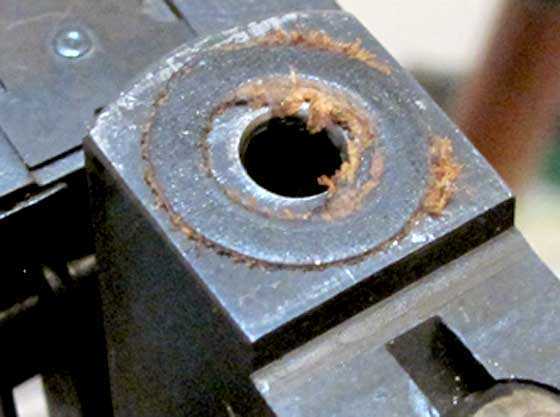 The leather seal I installed is too thin for the breech and has already flattened out after three shots. But it told me what I needed to know!

What size are the seals?

Okay, here comes knowledge number three. What size is this o-ring? When I measured it the first time in the gun, the numbers didn’t make any sense. I got a material thickness of 2.4mm with an outside diameter of 13.1mm and an inside diameter of 8.3mm. What a whacky set of numbers! Surely such o-rings don’t exist and I’m just not measuring them correctly?

Then I went to Grainger’s website. Such o-rings DO exist with those exact dimensions! Golly — this stuff really does work!

Okay, what do I do now? I could order a Diana 27 breech seal from Chambers Gunmakers, but they are currently out of stock. Even if they had one I would end up paying about seven to ten dollars for just one seal and have to wait about two weeks for it to arrive. Instead I decided to spend more money and save more by ordering the o-ring in bulk from Grainger — the same guys I bought the o-ring sets from. Each one will cost me about $1.15 this way and I should have them on Monday. Sure, I will have many more seals than I need, but Diana uses the same size seal for many of their spring-piston rifles, so what I am really doing is stocking up.

I have to say this 27S cocks harder than I expected. The Diana 35 I tuned with Tune in a Tube cocked with 16 lbs. of effort. That is off-the-charts good for a Diana 35 and much lighter than this 27S. Of course the 35 barrel does measure 19 inches while the one on the 27S is about an inch shorter.

I guessed the rifle cocked with 24 lbs. of effort. The scale agreed with me when I tested it, which sounds like I tested first and then wrote about it, but I didn’t. You have to remember I have done this same test hundreds of times before, so I’m getting pretty good at guessing the effort.

The two-stage trigger breaks at 1 lb. 8 oz. It’s light enough but not entirely crisp. I’m hoping some lube will sort that out.

This was a report that was supposed to go one way and instead went another. I learned a lot from it. Here is what I learned.

A breech seal can look okay and still be leaking air.
O-ring sets don’t contain every size of ring.
A good breech seal can add hundreds of f.p.s. to the velocity.
O-rings don’t always conform to even dimensions.

I know you machinists are laughing up your sleeves at how dumb I am, but if I don’t admit this stuff publicly there are guys who need to know it that will never find out. And, even if I am naive on the subject of o-ring sizes, who knew the right ones could boost the velocity of a low-powered airgun like a Diana 27S by over 300 f.p.s.? I sure didn’t. In the past I have seen gains of 60 and 80 f.p.s. when breech seals were changed, but today was a real eye-opener.

Will this rifle deliver the same 680 f.p.s. with Falcons when a fresh o-ring is installed? I don’t really know. I expected it to shoot around 650 f.p.s. and would be very satisfied if it ended up there. If it does the rifle is shooting where it should and all I have to do is go inside and lubricate it a little. This is going to be a good series!