Today we do something I don’t think I have ever done before. This is a second velocity test of my new/old Hy Score 807 pellet rifle that is a Diana 27 under another name.

You can thank reader Yogi and B.B. Pelletier for today’s topic. In the previous report I mentioned that I shot a final RWS Hobby pellet through the chronograph that registered 507 f.p.s. The average for that pellet was 493 f.p.s., and the highest previous velocity I had seen with that pellet was 496 f.p.s. When the last shot is 7 f.p.s. faster than the previous fastest velocity and when that fastest previous velocity is 17 f.p.s. faster than the previous fastest velocity (479 f.p.s. observed on the first string of 10 shots), then something is happening. Inquiring minds want to know!

I also mentioned in Part 2 that the last thing I did was drop 5 drops of Crosman Pellgunoil down the barrel with the rifle standing on its butt.

Here is what Yogi said.

“B.B. With a freshly oiled piston seal, do you anticipate any further velocity gains?
Guess I will find out later…….
Good Weekend everybody!”

I almost retested the rifle for Monday’s blog. With your question and the fact that I also want to know, I think I will.

So I retested it for today. When you see the results I think you will agree that it was a good thing to do.

I hadn’t shot the rifle since oiling the piston seal six days earlier, so I shot about 5 shots to warm things up. I’m glad I did because the first four were detonations from the oil. The fifth shot was quieter and I knew the rifle was now only dieseling, as it is supposed to.

The bottom line? This rifle is smokin’!

The last pellet I tested was the 14-grain RWS Meisterkugeln wadcutter. In Part 2 this pellet averaged 467 f.p.s. with an 18 f.p.s. spread between 458 to 476 f.p.s. I said that I thought that was as good as it could get, and boy, was that ever wrong! Today, after oiling the piston seal this pellet averaged 550 f.p.s. for a muzzle energy of 9.41 foot pounds. Last time the energy was 6.78 foot pounds. This is almost a 3 foot-pound increase, which is a 28 percent gain.

The extreme spread this time was 18 f.p.s. which is the same as before. The low was 542 and the high was 560 f.p.s. The standard deviation was 5.47 f.p.s. Please note that the smallest standard deviation (4.89) in today’s testing was with the pellet that also had the smallest extreme spread (14). That should hold true most of the time, if not always.

Today’s test should have taught us a valuable lesson — that leather piston seals need to be oiled. I picked up on that in Part 2 and oiled the seal after the test, which made a retest today necessary, as far as I was concerned. I didn’t expect to see such dramatic results, though.

This little .22-caliber Hy Score 807 is turning out to be one fine air rifle! I do want to take it apart and put a little Tune in a Tube on the mainspring, and then I want to shoot it for accuracy. 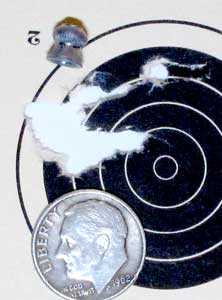