When I say build an airgun, it doesn’t have to work with compressed air. The Daisy 179 pistol is considered an airgun, but in reality it is a catapult gun. And spring-piston guns don’t have compressed air until the instant they fire. read more

They say that there’s nothing more zealous than a convert, and I expect that is true of me when it comes to scope levels. I have understood their need for a long time and even conducted a fairly extensive cant test back in my Airgun Letter days, but it was my .38-55 Ballard single-shot rifle that really drove the message home. That rifle came with a bubble level, and it’s far more precise than the levels we find on air rifles today. The bubble moves very slowly, making it important to check the level just before you begin the squeeze; because what looks like a level gun one moment can change slowly to a canted gun if you don’t watch the level. By contrast, the scope levels I’m using with airguns have bubbles that move very fast, are much easier to see and are far simpler to work with.

Today, I want to demonstrate the effects of using a bubble level. I’ll use the same Whiscombe JW75 that I’ve been using for the velocity versus accuracy test, because we already know it has an accurate pellet in the Beeman Kodiak. For this test, I first seasoned the bore with six shots, then fired a group of pellets with the bubble deliberately off-center in both directions. I fired a second group where I paid no attention to the level and just tried to level the rifle as best I could through the scope. The final group was shot using the level with the gun absolutely level for each shot. The distance was 25 yards, which several readers mentioned is almost too close to see the effects of using a level.

This is the insidious part of leveling a gun, and it’s what I’m showing with today’s test. You really can’t see a pattern to the group from not leveling the gun when you’re shooting as close as 25 yards, but you can see that there’s a difference between a level gun and one that’s not level. We’ll get to that in a moment.

What the level does
The scope is mounted above the barrel, so it’s adjusted to look through the trajectory of the pellet so that the point of impact coincides with the aim point at a certain distance from the gun. However, if you tip the gun to either side and then sight it, your crosshairs will still be on the point of aim, but the barrel will no longer be directly below the scope. It will be to one side or the other, depending on which way the rifle leans.

Our intrepid blog reader duskwight was kind enough to give us a link to a superb animation of this phenomenon. You will find it here. Someone (Wulfraed?) said that a gun will describe an arced impact point if the cant is shifted through an arc, left to right. That’s exactly what the online animation shows, and it’s exactly what a scope level does for you.

One reader asked if the scope level would still make a difference if the scope had been optically centered. Yes, it would. There’s no relationship between optically centering a scope and using a scope level. The former simply allows you to adjust the elevation for different ranges without the shot group moving from side to side because the scope stays centered all the time, while the latter relates to how the scope and rifle are actually held when fired. The first is optical, and the second is physical.

The test
The test is straightforward. First, I seasoned the bore with several shots. Then, I fired a group of 10 shots at 25 yards with the rifle canted to the right for 5 shots and to the left for 5 shots. The cant was controlled by the position of the bubble in the level, and I stopped tilting the rifle the moment the bubble came to the end of its travel. Obviously, there’s some error in this, as the bubble level is not a precision instrument, but I think you’ll get the idea. 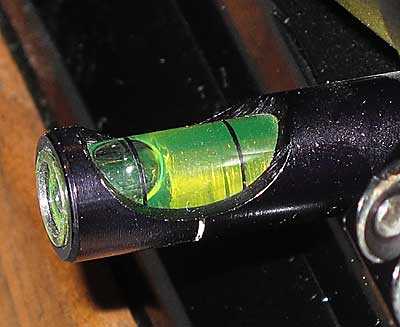 The rifle was titled until the bubble came to the end of its travel on the left side, as shown above. Five shots were fired at the target with the crosshairs on the center of the bull at 25 yards. 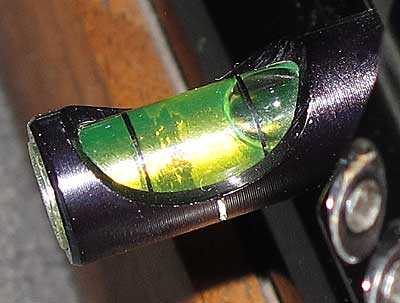 The rifle was then tilted in the other direction until the bubble came to a stop on the right side, as shown above. Five more shots were fired at the same target, just as before. 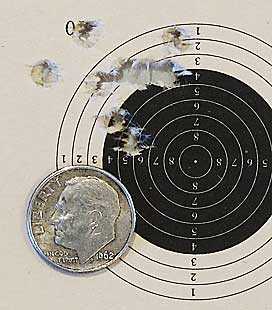 And here’s the group. Do you see that you cannot tell that the rifle has been purposely canted in two different directions? This just looks like a large group for a Whiscombe at 25 yards. Group measures 0.905 inches between centers.

Next, I shot another group of 10, only this time I completely disregarded the level. I just shot and tried to hold the gun level from the visual cues seen through the scope. This is the same way I shot the rifle during the initial accuracy test. 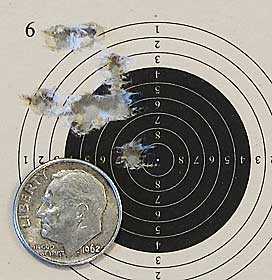 For this group of ten Kodiaks I disregarded the level. I tried to keep the rifle level by visual cues through the scope, but that was all. Group measures 0.874 inches between centers — or not much better than when I was purposely canting the rifle in two different directions. Also note how much like the first group this one looks. read more