Some of you may know that Bill Sanders, the managing director of Air Arms, passed away recently. Bill was very uncharacteristically enthusiastic about all the guns he made. I say that because most principals in this industry are not shooters, nor do they own the guns they make. But Bill did, and he also knew how to use them. Maybe that’s why, in the more than 20 years the TX has been around, the quality has only gone up. read more 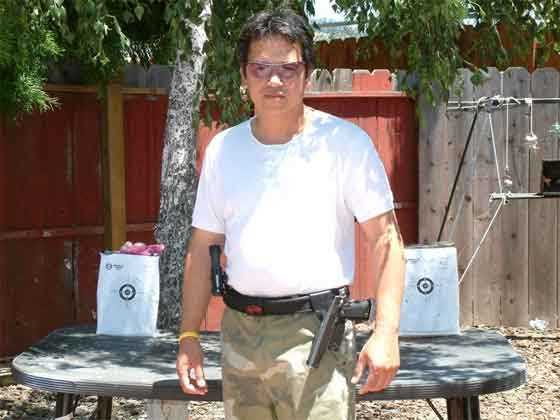 Miguel’s winning photo. Looks like he’s got quite a target range set up.

This blog started in 2005 on the suggestion of Edith. She knew I missed writing The Airgun Letter and she thought a weblog would be a nice way to replace it. She also felt it was a better way to address airgun issues than with articles, because a blog has a way for the readers to make comments. I’d already been writing articles for the Pyramyd Air website for many years when the idea of the blog first surfaced. Josh Ungier, the owner of Pyramyd Air agreed and the blog kicked off on the first of March 2005. The first report was called Hunt with the Sheridan Blue Streak air rifle. read more

They say that there’s nothing more zealous than a convert, and I expect that is true of me when it comes to scope levels. I have understood their need for a long time and even conducted a fairly extensive cant test back in my Airgun Letter days, but it was my .38-55 Ballard single-shot rifle that really drove the message home. That rifle came with a bubble level, and it’s far more precise than the levels we find on air rifles today. The bubble moves very slowly, making it important to check the level just before you begin the squeeze; because what looks like a level gun one moment can change slowly to a canted gun if you don’t watch the level. By contrast, the scope levels I’m using with airguns have bubbles that move very fast, are much easier to see and are far simpler to work with. read more