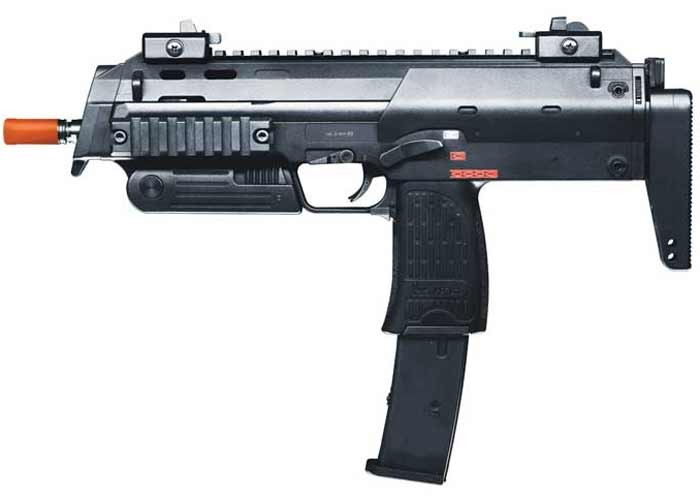 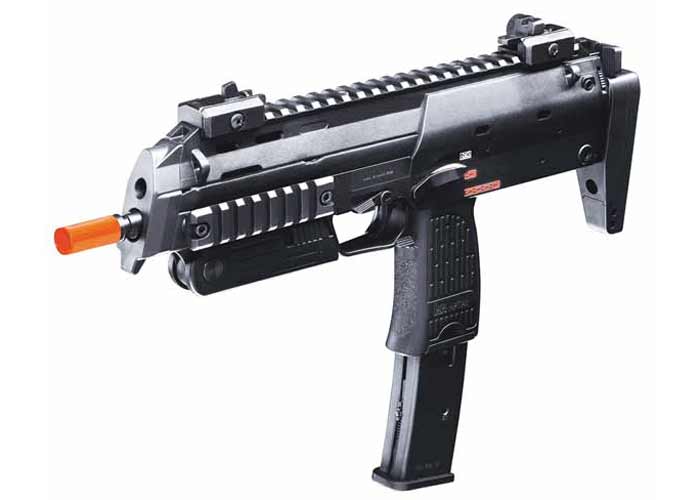 Well built. Solid feel. Of course, more fun than you can imagine.

It only comes with one magazine. You will want to order a second to keep the fun rolling between loadings.

When I fold out the vertical foregrip and pull out the collapsable stock, this is the most comfortable weapon I have ever shouldered. It is fun to shoot on full auto and even semi auto is fun with its solid recoil. I originally purchased this airsoft gun as a backup to my KWA LM4 PTR, but the MP7 has a slightly higher magazine capacity than my LM4 and a higher rate of fire. In most situations I prefer the MP7 over the LM4. With a red dot sight attached, I can be just as accurate with the MP7 as a I am with the LM4. I do seem to get tighter groupings on full auto than with my LM4 which I almost never shoot on full auto. The gun feels very solid even with its polymer construction.

The iron sights and the pistol sights have me aiming too low to the target no matter how much I adjust the elevation. I believe it is because they sit so high off the barrel. There is no way to lock back the bolt without inserting an empty magazine. This would have been nice for checking to see whether the chamber is clear.

This is hands down the best gas airsoft SMG I've ever seen. It's reliable, reasonably accurate, very high ROF , Plus it's loud and intimidating! Magazines are easy to load in the field, and the magazines hold so much gas that you can reload several times without running out of green gas. (provided you use short bursts and let the magazine warm up periodically) Balance is great, the adjustable flip up sights are quite sufficient, but you can easily slap on a dot sight. The folding stock has metal parts and feels very very solid. as does the flip down fore grip . It's really a great deal of fun and I use it in skirmishing as well. Extra magazines are readily available. (I got a couple of mags from pyramid not long before writing this review) Great for the highly mobile player, (not great if you like to camp with a high ROF AEG and hose down your opponent with bbs, it's just not meant for that) I'd recommend this just on the sheer fun factor alone, but the superb quality is also a factor.

I really like it , I can't think of a thing that really needs improvement.

Well it's kinda heavy , but comparable to an AEG with battery of similar size I guess. Mine seems to like to shoot .25's and .28's. .20's seem a little light. Spare magazines are a bit pricy , but they are metal and well made. In skirmishing i've found that a loud "smokey" GBB SMG like this can sort of momentarily "stun" new players, It's kind of the rabbit in headlights effect. Seasoned players ignore it, but it's kind of funny. I've seen inexperienced players seem to forget that they have an airsoft gun too for a second, or sometimes being startled , they respond with a wild spraying motion with their AEG, with results inevitably in your favor. I dunno, sometimes the startle factor is worth something, but the other side of that is that a seasoned player will hear you from way across the field , because it is loud and has a distinctive sound. So they'll know not only where the shooting is going on but who is likely doing it.