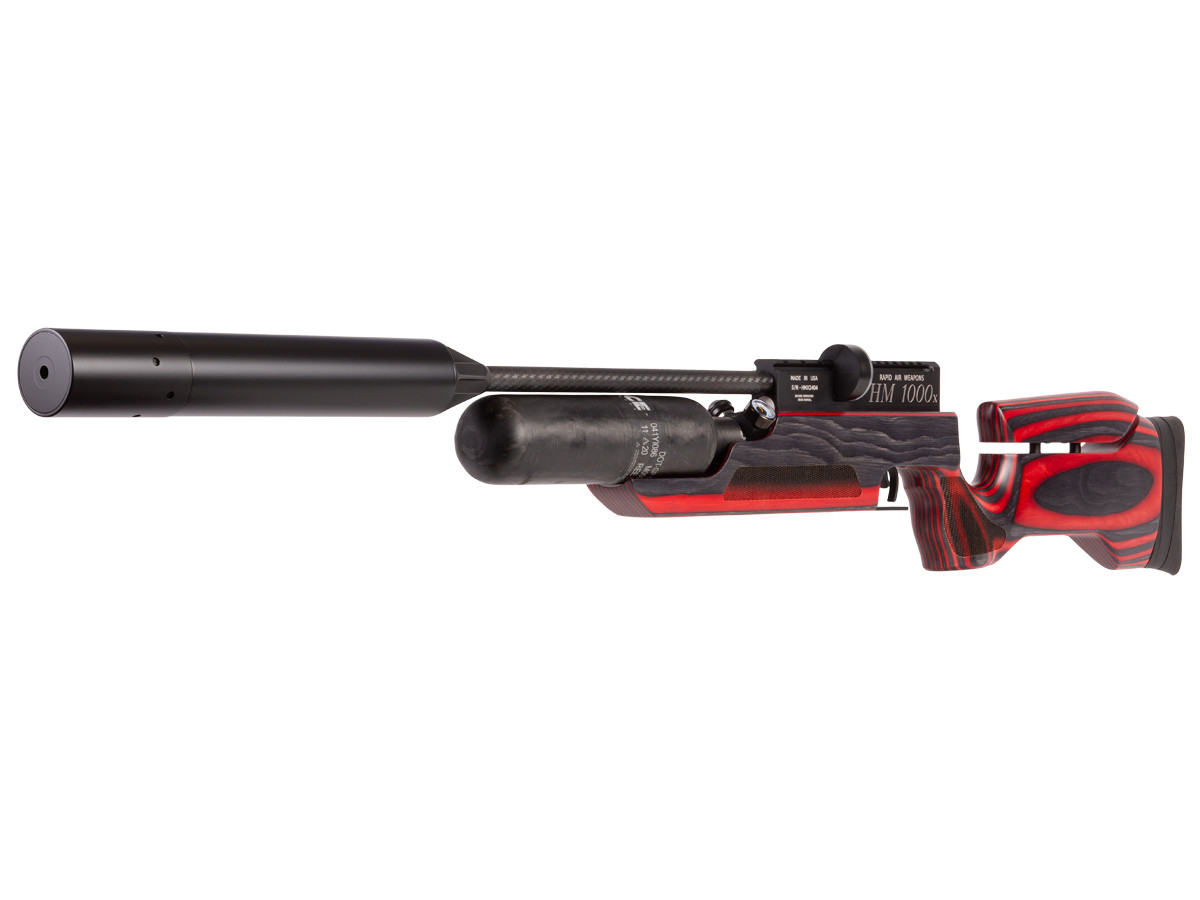 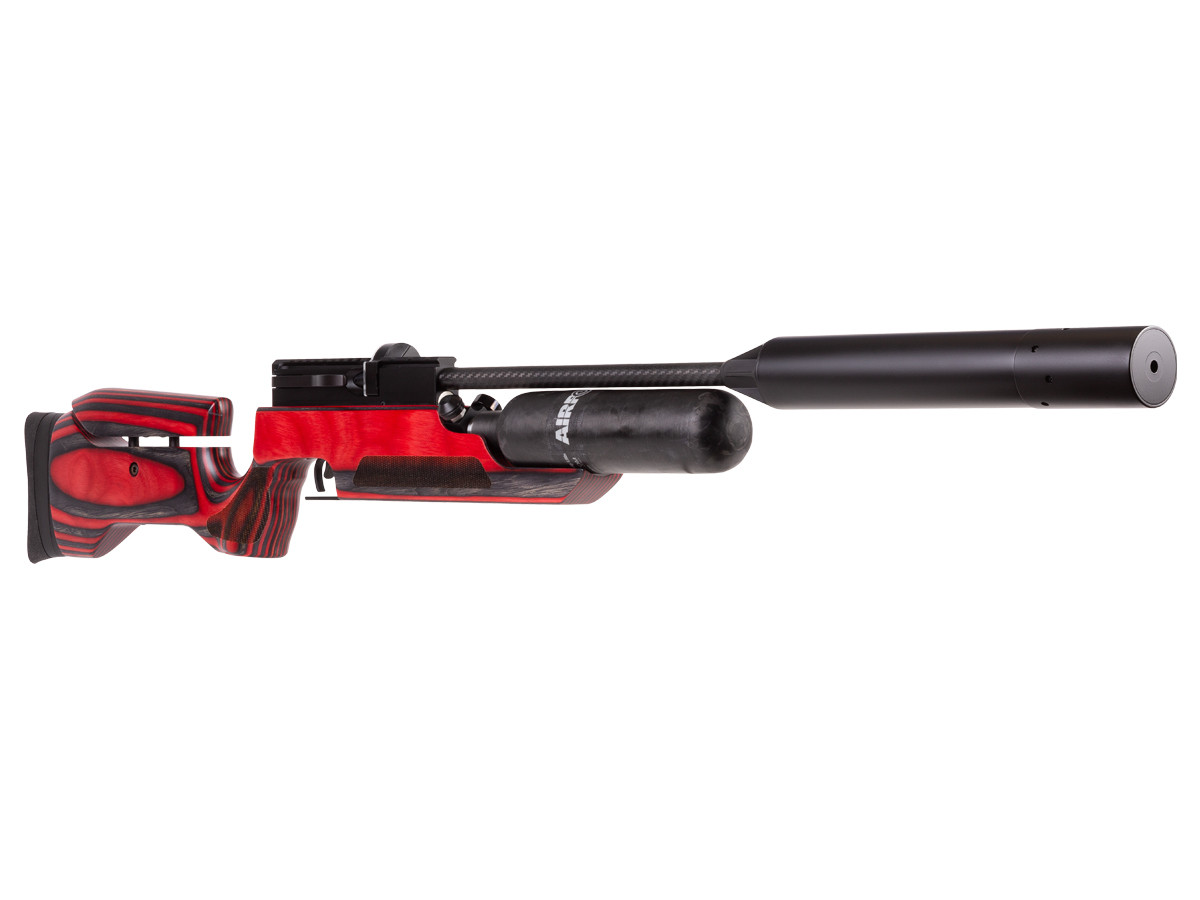 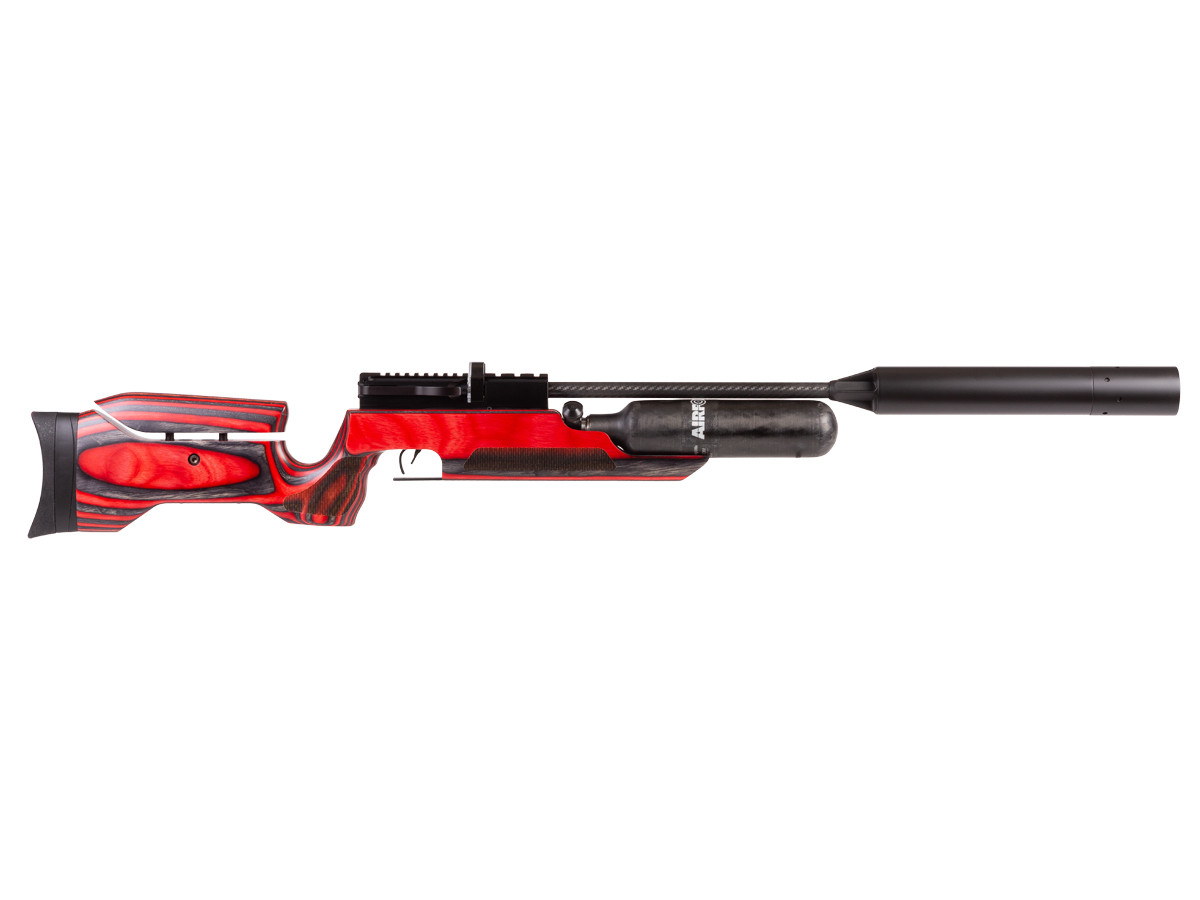 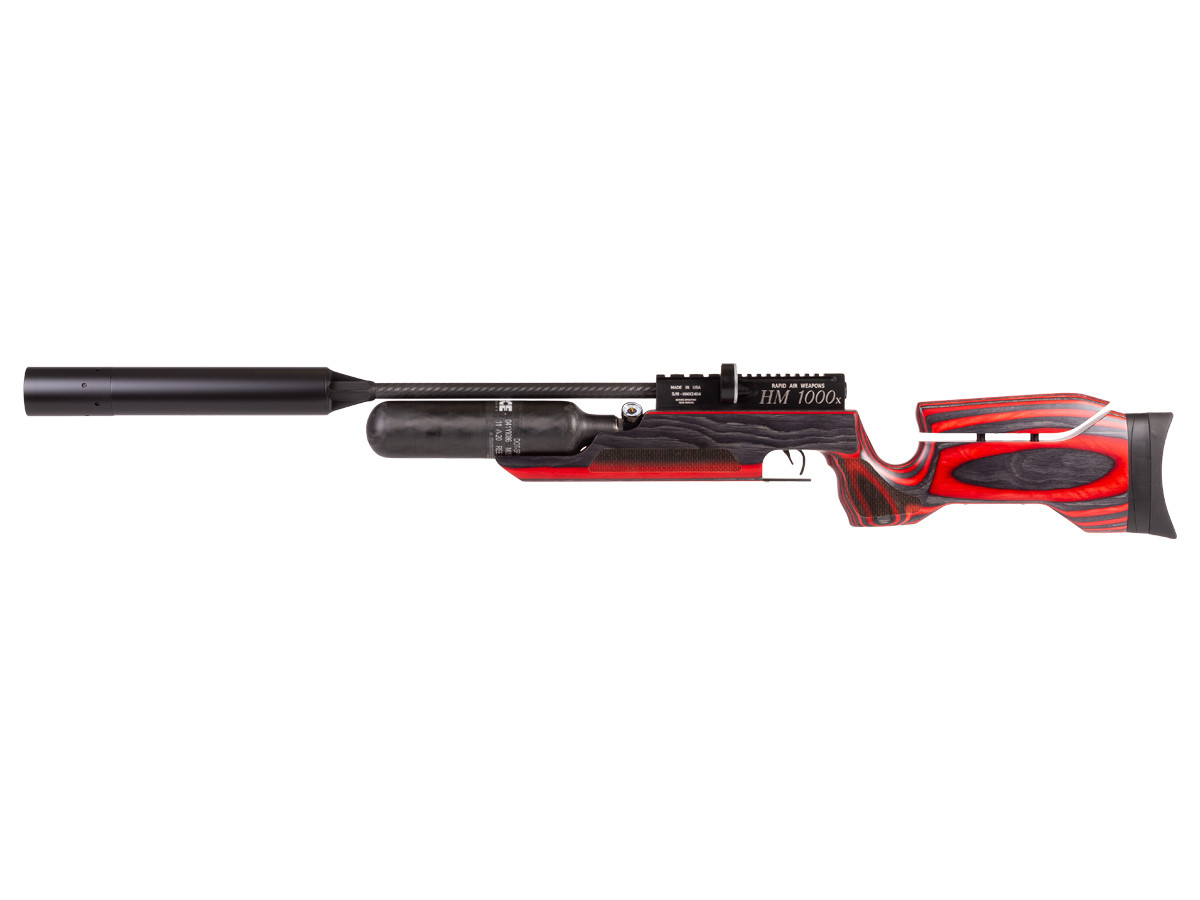 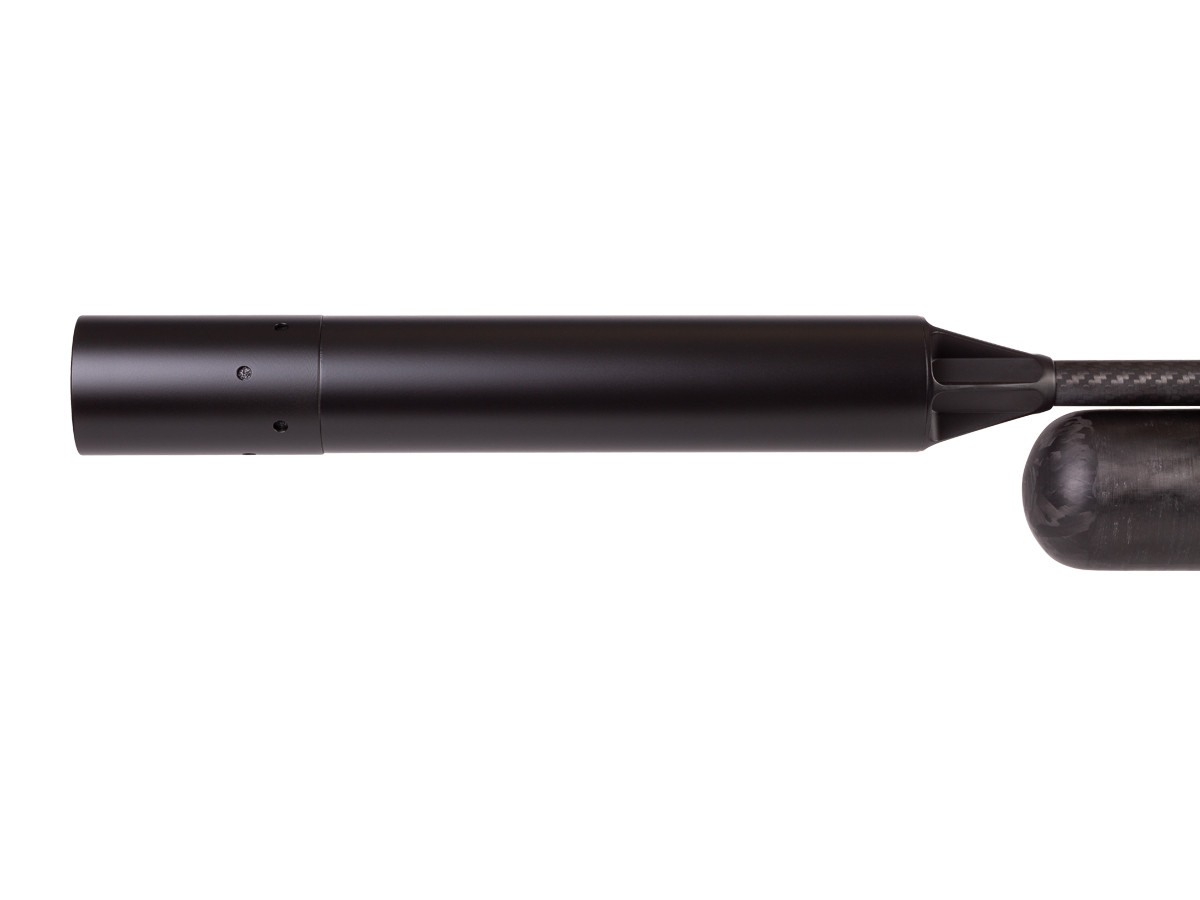 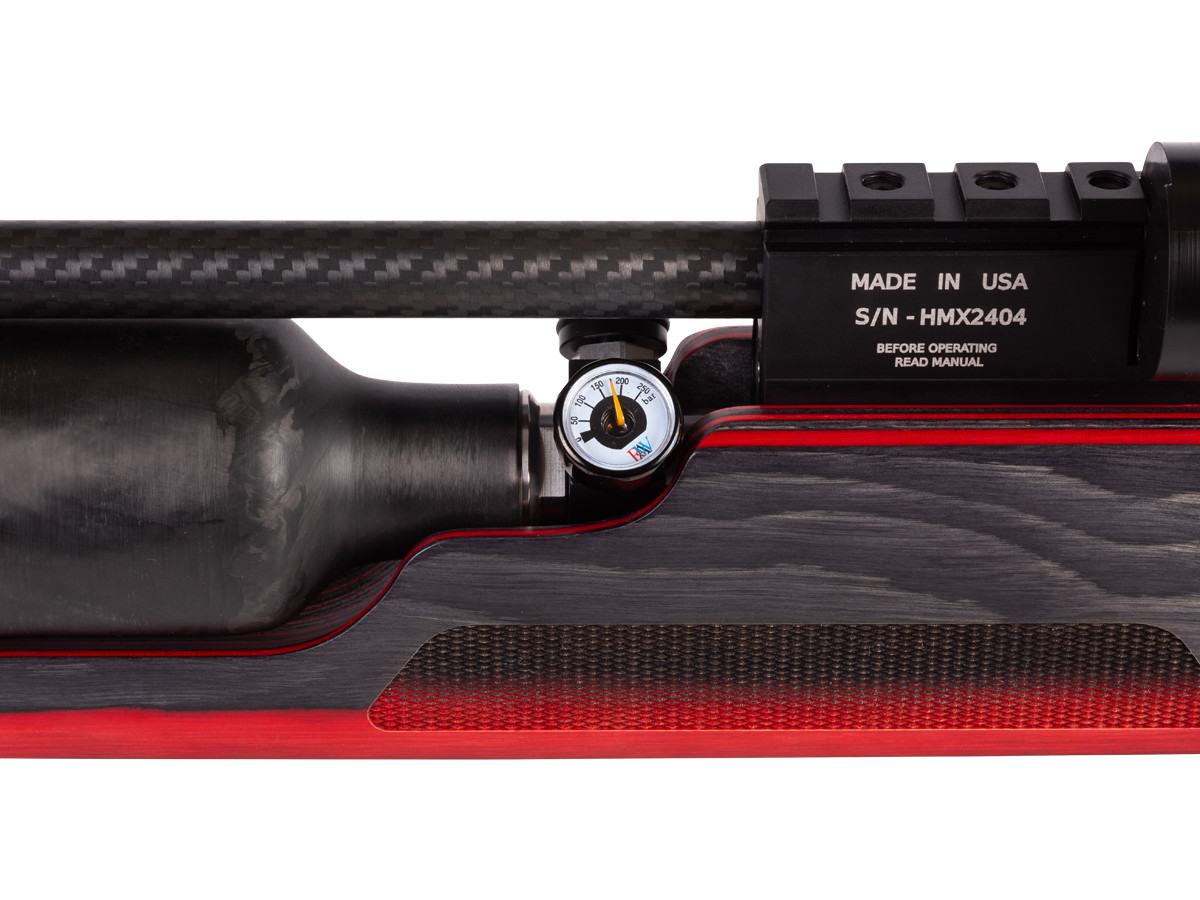 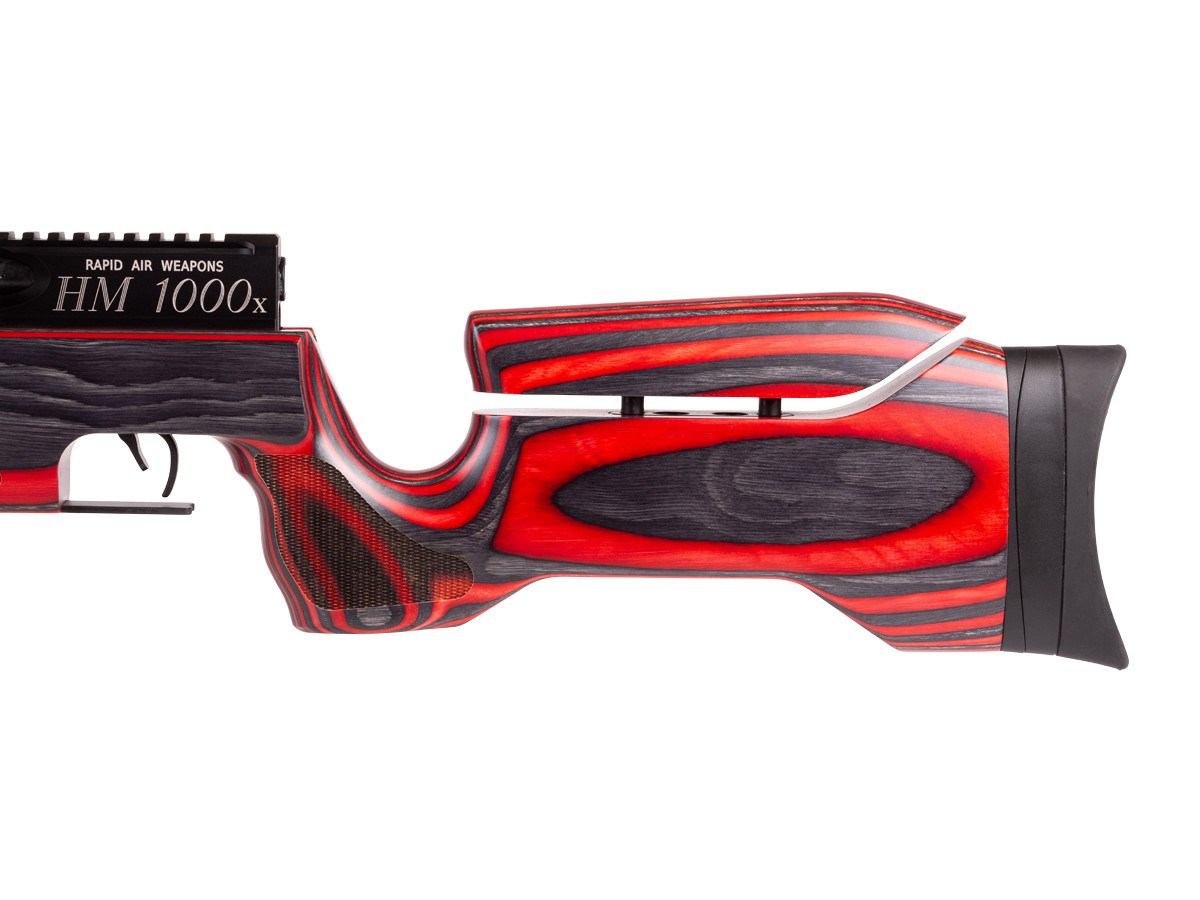 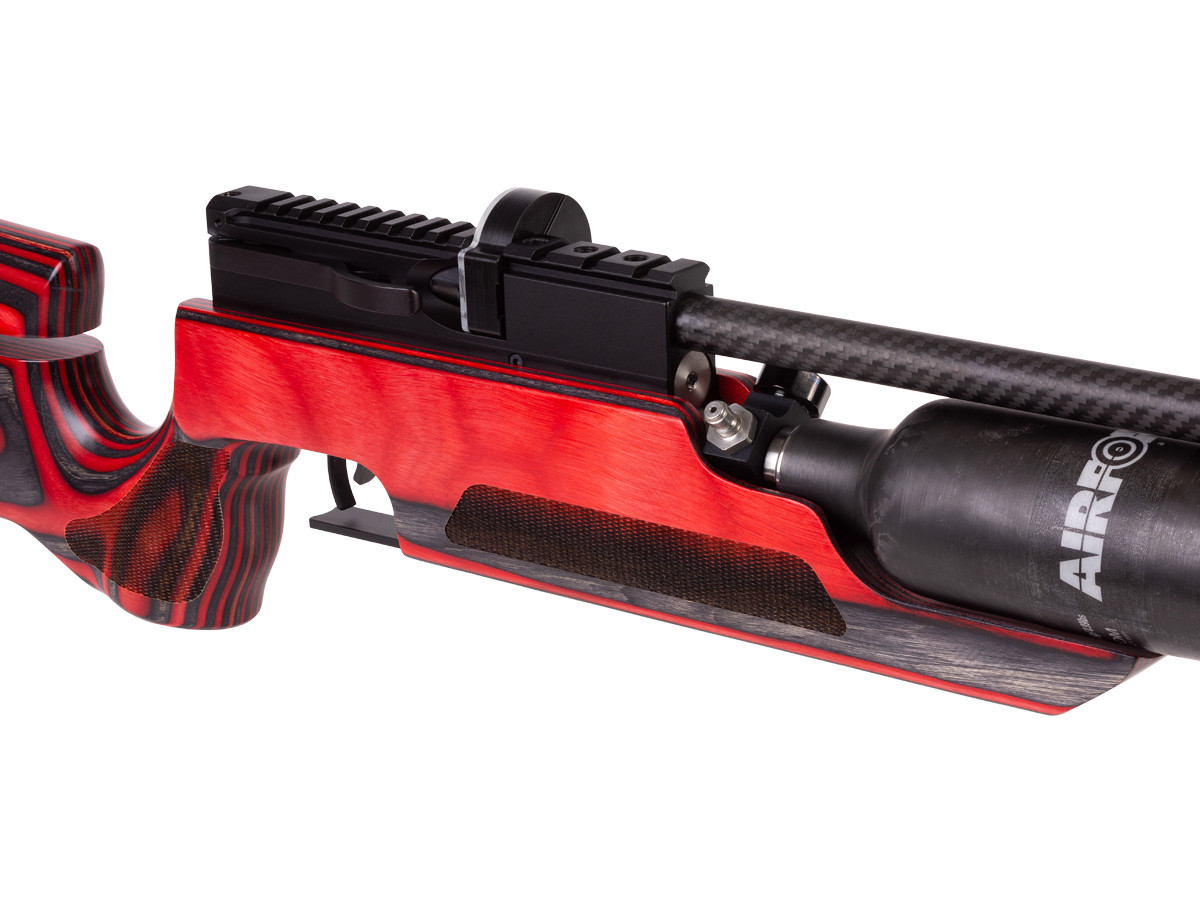 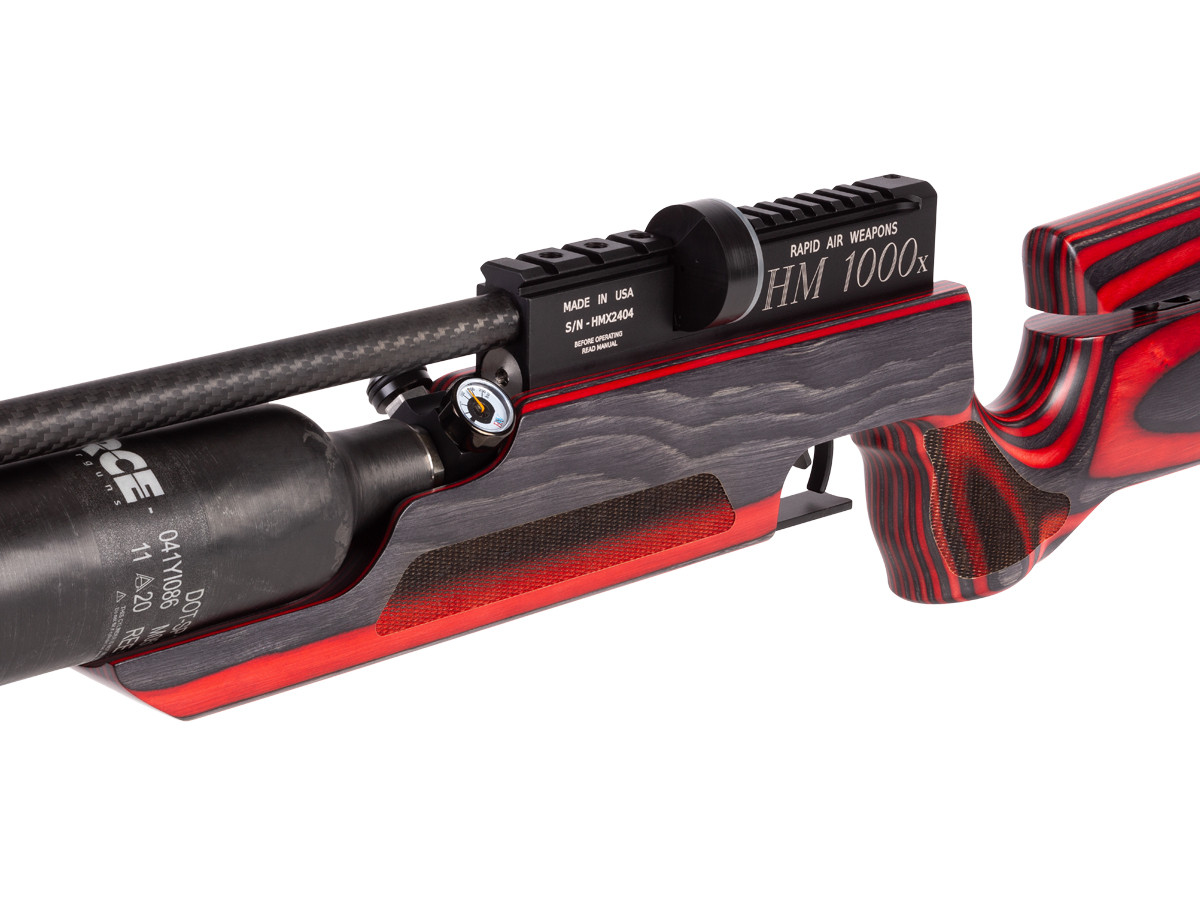 For serious shooters seeking the ultimate in accuracy from a pre-charged pneumatic air rifle, it doesn’t get any better than this.

The LRT features an adjustable, match-grade target trigger with an added safety catch. And, thanks to its fully moderated Lothar Walther polygonal rifled barrel, backyard plinkers won’t intimidate the neighborhood with loud reports, while the two piece design of the muzzle shroud allows the user to choose the length configuration and sound signature that suits their needs best.

The RAW HM1000x LRT delivers elegant form along with precise function in a sub-9-pound package by integrating all of this industry-leading hardware into a richly appointed, red laminate stock. It comes stock with adjustable cheek rest and rubber butt pad for enhanced accuracy through a custom fit. The stock is checkered for a secure grip and its forend features five M-Lok slots for attaching accessories like bipods and Q.D. attachments. As an added bonus, the forestock’s underside is flat to provide bench shooters with an ultra-stable point of contact.

Hand-built and tested, the HM1000x LRT is billed by RAW as “the most accurate pre-charged pneumatic air rifle made in the USA... capable of sub 1-inch groups out to 100 yards.” It’s designed for everyone from serious plinkers and hunters to field target and benchrest competitors demanding the highest, most consistent levels of performance from their air rifles.

People who have shot & worked on these guns extensively prefer them to the FX Crown and Impact. Simple, accurate & durable quality that will last decades.

Not what I expected. I've been an avid airgunner for over 10 years, and this is my 4th PCP airgun. I wanted something accurate, American made, with a left handed bolt that had the power to easily take down a rabbit. I also wanted something that I could pass on to my kids. The HM1000x LRT seemed like the perfect choice. Its a whole lot of money, but if I wanted to get a Rolls-Royce grade airgun, this seemed to be a great fit. I was wrong. A few years ago, this may have fit the bill, but things have changed. First, the gun came in a generic shipping box that was too small for it and didn't have a much-needed cutout in the foam for the airgun itself, but it came to me mostly unscathed. I tried to read the manual that came in the box with the gun, but the printer that it was printed on was so low on ink that all of the color sections were unreadable. I went online to find an electronic copy, but its unavailable on their website.

So, I look for articles online about the gun, and find that the max pressure is 230 bar, so I pump it up until my pump reads 225 bar. Then I look at the gauge on the gun, and its at almost 250 bar. Oh heck Turns out that the gauge on this $2100 gun is inaccurate. RAW sent me a new gauge that was within 5 bar of my other gauges, but should I have to do this with a $2100 gun? Finally, I try to shoot it, using 3 different JSB pellets (18.13gr, 25.39 gr and 34.0 gr). The heavy JSB pellets I bought for it (25.39 gr and 34.0 gr) are very hard to get into the RAW 12-shot magazines. I have to force the first one in with a 2nd pellet. So, I call RAW and they tell me they will look into it, but multiple emails asking for updates have gone unanswered. I ended up having to use a drill bit to open up the hole on the top clear part of the magazine. I shouldn't have to do this with a $72 magazine on a $2100 gun.

The trigger is excellent. Its accuracy is just OK its a little worse than my Benjamin Marauder (which I could buy 3 of for the price of this gun), and a little better than my Hatsan Nova QE. RAW has recommended that I turn up the hammer spring a bit to increase the power for better accuracy (they said that my chronograph speeds were a little low for the JSB 25.39gr pellet, which is their benchmark), but I havent had a chance to do so yet. Again, though, should I have to do this myself on a $2100 gun, or should RAW have done this before they shipped the airgun to me? In summary, I think that the gun is fundamentally well designed, but ever since RAW was sold, it seems that someone has chosen to try to sell $2100 airguns with a customer support and QA budget befitting a $210 airgun. In retrospect, I would have purchased my 2nd choice, an Air Arms S510 XS. I would have saved more money than a new Benjamin Marauder costs, and I likely would have received a much better sorted out machine.

Thank you for your comment!
wow, i am in the process now of shopping for a new gun and this was on my list...until now. i am surprised at these ridiculous faults on a gun in this price range. thank you for saving me from making a mistake.
Yeah Bryce, I received my Camo HM1000xLRT in October 2020 and was surprised with the Moderator, stock and butt pad changes. A pic of this updated RAW version hadn't even been published by on-line vendors when I ordered, hence didn't get the gun I ordered. - My gun's pressure gauge also reads 250 bar when my machine (pump) reads 230 bar? However, after making a new moderator, changing out the butt pad, making a SSG to eliminate hammer bounce, the gun gets 168 shots per fill (14 clips) at 920 fps using 18.13 JSB's. As you mentioned, otherwise the build quality is superb and the trigger is peerless. I would also mention, the gun is very simply designed and easy to work on. At this point, I couldn't be happier, but most folks wouldn't be able (or want to spend the time) to make the changes I did, .... restoring it.
Add comment to this review
July 26, 2019
By Martti

Personally for me a piccatiny rail for bipod or even an add on with gun would have been nice. Not a big deal though.

Before getting rubber mulch for card board box took a few shoots at target mounted onto half inch plywood. Pellets went right through, leaving a pretty large exit hole. So backyard shooters be aware.

4.5 (6 reviews)
Product DetailsItem comes in various specifications. Check product details to select what is best for you.