Today, I’ll shoot the Hatsan Torpedo 155 for the first time. As you remember from Part 1, this is a huge, heavy air rifle that the manufacturer lists at 1,000 f.p.s. in the .22 caliber I’m testing.

It has a serial number
In Part 1, I mentioned that I couldn’t find the serial number. Edith looked for it and was unable to find it, either. But it’s there — directly behind the image of a pellet on the left side of the spring tube and looks like the speeding lines of a pellet in flight. Too small for old eyes, I guess. The serial number of the rifle I’m testing is 111124934.

Cocking effort
In the first report, I estimated the cocking effort would be between 60 and 70 lbs. It measures 64 lbs. on my bathroom scale. That makes this a rifle for strong men, and some will not be able to cock it at all. For most people, it’ll be a two-handed operation.

Power
Hatsan rates the .22-caliber Torpedo 155 at 1,000 f.p.s., which means it should handle heavier .22 pellets well. That being the case, I began the test with Beeman Kodiaks. This 21-grain lead pellet is considered a heavy pellet in .22 caliber, plus it’s also one of the most accurate pellets on the market. At the start of the shot string, there were several faster shots; but after the first four were fired, the rifle settled down. After that, it averaged 772 f.p.s. with the Kodiaks. The range, once the velocity stabilized, was from a low of 767 f.p.s. to a high of 779 f.p.s. — a spread of just 12 f.p.s. At the average velocity, this pellet averaged 27.8 foot-pounds of muzzle energy. That’s up in the super-magnum class for springers!

The next pellet I tested was the 18.1-grain JSB Exact Jumbo Heavy. This pellet was a loose fit in the rifle’s breech, and the results were not good. They averaged 779 f.p.s., but the spread went from a low of 669 f.p.s. to a high of 854 f.p.s. That’s 185 f.p.s., which is far too much for good results. At first I thought perhaps the rifle needed to get used to them, but that wasn’t the case. They were just all over the place. At the average velocity they produced 24.4 foot-pounds of energy at the muzzle.

Then I tried the RWS Superdome pellet that weighs 14.5 grains. They averaged 951 f.p.s., but once more the range of velocities was larger — going from 906 to 960 f.p.s. That’s a 54 f.p.s spread. This is another pellet I don’t think will do too well in the rifle in accuracy tests. At the average velocity, this pellet generates 29.13 foot-pounds of muzzle energy.

Trigger-pull weight
The Torpedo 155 has a Quattro trigger; so after all testing was completed, I checked the pull weight. This trigger varies greatly, depending on how you pull it. The best (lightest) way is to get down low on the trigger blade and pull back and slightly up. Doing that, the trigger breaks at 6 lbs., 7 oz. with a lot of creep in stage two.

Break-in
The rifle’s action was noisy and stiff when I started the test. As the shot count grew some of the stiffness seemed to disappear. I think this is an air rifle that needs to be broken in over many shots. Some of the Gamos from the later 1980s and early ’90s needed 3,000 to 4,000 shots to become smooth and nice to shoot. But like the Hatsans, they were also stiff and creepy in the beginning. I wouldn’t be surprised to see the cocking effort drop back under 60 lbs. as the rifle breaks in.

Next
The next step with this rifle will be a test of accuracy using the open sights. I will get to learn the rifle’s quirks that way, and also put a few more shots on the action. 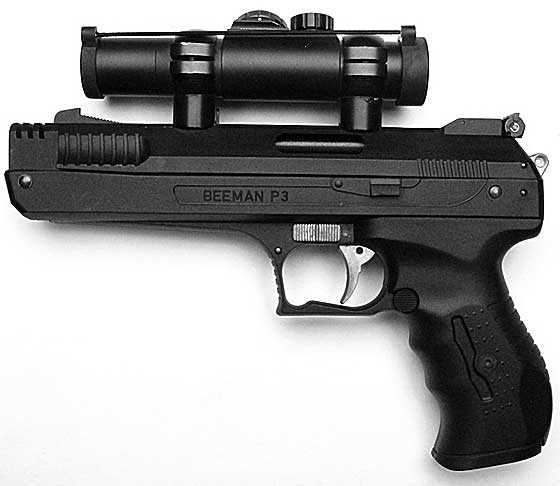