Today, I’ll start testing the new AirForce Condor SS rifle with Spin-Loc tank. I’ve been waiting a long time for this test, because it affords us the opportunity to look at so many new things from AirForce Airguns. Not only will we get to see the new baffled silencer system, we’ll also get another look at the new trigger and safety on which I reported back in January. I linked to that report, above, and labeled it as Part 1 so you can get a better look at the new trigger by reviewing it, though I’ll continue to make comments on the trigger as this report unfolds. We’ll also get a look at the new Spin-Loc tank that allows filling without removing the tank from the gun. There’s a lot of ground to cover, so let’s begin.

The rifle I’m testing is in .22 caliber, which I believe is the best caliber for all AirForce rifles. I won’t give the serial number because this rifle is mine. It’s not going anywhere after this report is completed. Don’t worry — they’ll make more!

What is the Condor SS?
AirForce Airguns is an American manufacturer based in Fort Worth, Texas. They make all the parts of their guns except for the barrels, which they source from Lothar Walther, the air tanks on many of the sporting models and the synthetic parts. Although shrouded barrels are commonplace in 2013, it was AirForce that introduced them to the market back in 2001 with their Talon SS.

In 2004, they started production of the Condor, one of the most powerful smallbore air rifles the world has ever seen, and one that still gets more shots per fill than any of its competition. Generating 65 foot-pounds of energy in .22-caliber, the Condor is a pellet rifle whose muzzle energy equals the standard speed .22 short rimfire cartridge. Only the diabolo design (wasp waist and hollow, flared tail) of the pellets it shoots prevents it from shooting as far as the rimfire. The Condor gave airgunners a rifle with .22 rimfire power and reasonable downrange safety at the same time.

These are all precharged pneumatic (PCP) airguns. Their butt reservoirs are filled to 3,000 psi (nominally — each gun may be a little different) and fired until they fall off the power curve at lower pressure. A Condor will get up to 20 powerful shots on a fill, and a Talon SS will get around 35-40 shots.

Shooters liked the SS for its quiet operation. When it was new, the SS was one of the quietest airguns in town that was also legal to own because it doesn’t have a silencer that can be installed on a firearm. And the Condor that can shoot a pellet through one and a half 2×4 boards delighted folks with power they’d only dreamed about. But the Condor was noisy, and the SS produced only about 25 foot-pounds of muzzle energy in .22 caliber. People wondered why AirForce couldn’t do both things — power without the noise.

Quiet power!
The rifle we’re looking at in this report combines much of the power of the Condor along with the quiet of the SS. In fact, this rifle is even quieter than an SS. It’s as quiet as SS owners wish their guns were.

Spin-Loc tank
And, in response to customer requests, AirForce now offers the Spin-Loc tank that remains attached to the rifle, once installed. It has to, because it sports an onboard pressure gauge — a manometer — that customers also said they wanted. I’ll grant that this gauge is a handy thing since it lets you know the state of the fill the moment you grab the rifle. That’s very convenient when you pick it up after the gun hasn’t been used awhile. There’s no need to guess at the charge — it’s right there on the gauge. It was always easy to count your shots before; but when you set aside the gun for many days, you might not remember where it was in the fill. Of course, you could always top it off before shooting, which is what shooters did before the gauge; but now they don’t have to. The gauge tells them if there’s still enough air.

The Spin-Loc tank has to be installed with tools that come with the rifle. An Allen wrench loosens the single locking screw that allows the threaded bushing in the frame to turn freely. That bushing will join the tank to the frame. Don’t remove the locking screw — just loosen it so the threaded bushing can turn freely. A toothed wrench or spanner that comes with the gun can then turn the bushing to tighten it onto the tank. The tank itself cannot be turned much because neither the pressure gauge nor the male Foster fill nipple will clear the frame. So, the bushing has to be tightened onto the tank’s threads — drawing it onto the frame. 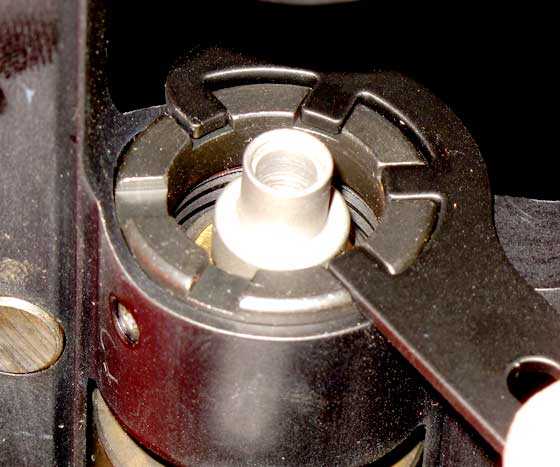 The Spin-Loc tank is installed by tightening the captive bushing with a special wrench that’s supplied with the rifle. 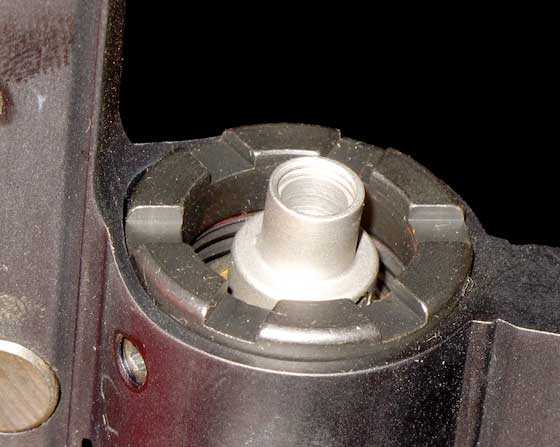 Once installed, the Spin-Loc tank fits tight to the gun’s frame.

I have to say that it took me a couple tries before I got the tank threading straight onto the bushing. It’s a problem of controlling both the gun and the tank, so the tank’s threads do not start cross-threading. Both the bushing and the tank’s threads are steel, though, so the risk of damaging the threads is low. Just work carefully; and once the threads start to join, everything goes together easily.

Reversible buttpad
Once the tank was on the gun, I adjusted the pull length by adjusting where the buttpad clamps to the rear of the tank. I noticed that the buttpad can also be flipped upside down, allowing it to extend lower for more contact with the shoulder, so I did that, too. In the end, I have the rifle set up for a 14-1/2-inch pull, which is ideal for me, and the buttpad is canted inward at the toe, which is how all my AirForce rifles are set up. There are several inches of adjustment with this pad, so fitting an adult shouldn’t be a problem. The picture at the top of this report shows the buttpad reversed like this.

New trigger and safety
I covered the new trigger and safety thoroughly in Part 1, but it’s new so I’ll mention it here. The trigger is 2-stage and not adjustable. I’ll give you the pull weight and critical data in the velocity test, which comes next, but we do know that it’s very crisp and stops after the sear is released.

The biggest difference in this trigger is that it cannot be uncocked. The gun, once cocked, must be fired. Since the Spin-Loc tank cannot be easily removed, the question becomes: Can you release the trigger without opening the valve? As it turns out, you can. Simply move the bolt a little forward so it isn’t pressed against the valve (which is referred to as the top hat), hold it there with your thumb and pull the trigger. Your thumb will catch the striker before it opens the valve very far, limiting the amount of air the gun fires. As convenient as this is, I would only do it with an unloaded (no pellet in the breech) gun that’s pointed in a direction that would be safe to fire. Because if you misjudge where the bolt has to stop, the gun could still fire a pellet. 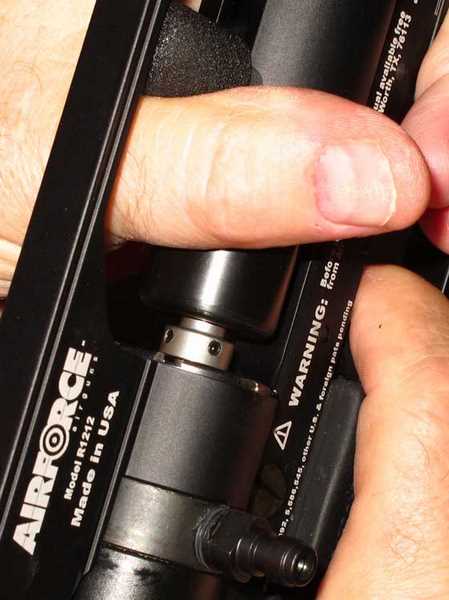 To uncock the gun, catch the striker with your thumb, as shown above. Point the muzzle in a safe direction when you do this.

18-inch barrel
The Condor SS comes with an 18-inch Lothar Walther barrel in your choice of calibers (from .177 through .25). Naturally, you can change the barrels as with all other AirForce sporting rifles, so you can own all 4 calibers for a fraction of what 4 complete guns would cost.

Ahead of the barrel is the system of baffles that make the SS what it is. I’ll show those in the next report, but there’s something that nobody has mentioned, yet. This rifle will also accept a tank with a standard valve; and if you use one of those, you’ll get twice the number of shots as you get from the Hi-Flo tank that comes standard on the Condor. And because of the 18-inch barrel, the gun will also be more powerful than a stock Talon SS. So, you’ll have great power and lots of shots! This is so intriguing that I’ll test it for you after I complete the full test of this gun as it comes from the factory.

Adjustable power
Like all AirForce sporting rifles, this new one also has adjustable power. We’ll experiment with that when we test the rifle for velocity.

Construction
The Condor SS is made of aluminum, steel and some soft synthetic parts such as the grips and forearm. It has very straight lines, and the buttpad that drops down plus the raised scope rail make it quite easy to adapt to scope use. The accuracy is legendary, and we’ll put that to the test at multiple distances.

I’ve waited a long time to test this gun for you. So, sit back and enjoy this — it’s going to be a long ride.