The course
I fired all targets from 15 feet, which is the NRA distance for BB gun competition. Daisy uses 5 meters, which is about 16 feet, 6-and-a-fraction inches, but the NRA standardized on 15 feet many years ago and hasn’t changed. They don’t hold any significant competitions that I am aware of, while Daisy hosts the International BB Gun Championships every year. But since the gun I’m testing was never meant for competition, I felt the shorter distance would suffice.

I shot the gun from a rest using the artillery hold to take myself out of the picture. The target was well lit, and the Crosman M1 Carbine has an adjustable peep sight at the rear, so the sighting system is pretty advanced.

Daisy Premium Grade zinc-plated BBs
The first BB was the Daisy Premium Grade zinc-plated BB. You saw how these compare to the Umarex precision BBs in Part 2 of this report. Nine of the 10 BBs landed in 1.354 inches and were slightly low and to the right of center. But 1 of the 10 shots strayed up and to the right, opening this group to 5.148 inches between centers. No shot was a called flier. 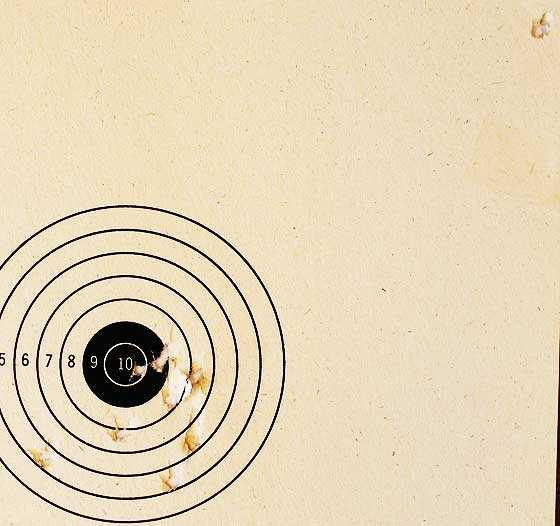 The 9 shots in the bull area went into 1.354 inches, but the shot at the upper right corner opened the group to 5.148 inches. Daisy Premium Grade zinc-plated BBs.

I expected results that were like the 9 shots. I did not expect any wild shots like this one!

Okay, so maybe the Umarex BBs would do better in this gun. Remember, I’m shooting off a rest at 15 feet.

Umarex Precision BBs
Next, I loaded 10 Umarex Precision steel BBs and tried a second group on a fresh target. I can’t tell you how large this group is because 2 of the BBs missed the target trap and hit the backer board I put up to protect the wall. I know one of them was high because it passed through a piece of cardboard I had taped to the target trap. The 8 shots that landed on the target paper made a group measuring 3.046 inches between centers. It’s impossible to know how large the actual group was since 1 of the BBs left no record whatsoever. 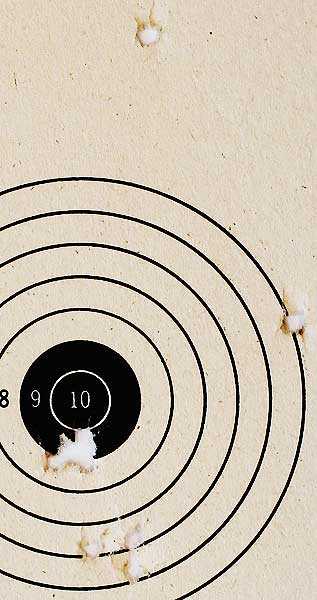 These 8 Umarex BBs landed in a 3.046 inch group at 15 feet, but 2 BBs missed the target paper altogether. So, the 10-shot group is larger, but there’s no way of knowing how large.

Wow! This wasn’t the way I remembered the M1 Carbine! I knew you would have a lot of questions for me. So, I decided to do something about it.

This time, all 10 BBs hit the paper and made a group measuring 3.681 inches between centers. That is the best group of all 3 BBs tried. But it wasn’t good enough for me. Shooting 3 inches at 15 feet is something I never want to do because I know I’m better than that. How much better? Well, I had to find out. 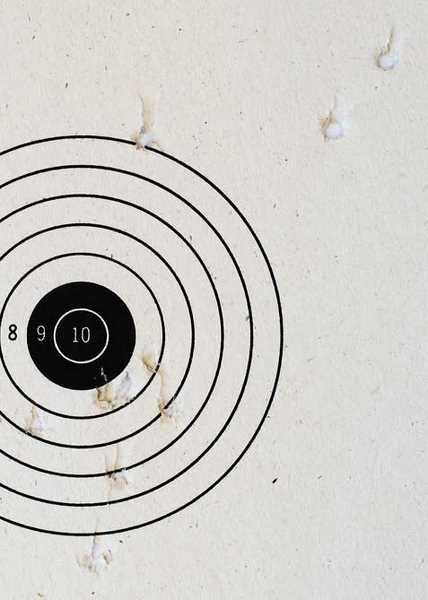 Ten Avanti Precision Ground shot BBs made this 3.6781-inch group at 15 feet. It was the best group made by the the M1 Carbine in this session.

This time, 10 shots went into 0.328 inches. They were a little high and right on the target, which means I need to adjust the rear sight just a little, but I’m pleased with the group size. It came after firing 30 aimed shots, so I was starting to get tired, if anything. 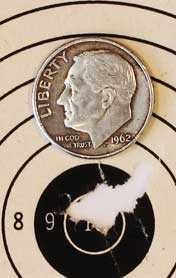 This is 10 shots from the Daisy Avanti Champion 499 BB gun. Though the group measures 0.328 inches between centers, the gun is capable of much smaller groups in the right hands.

Conclusion
The Crosman M1 Carbine is not as accurate as I remembered. I expected to put 10 shots into 1.5 inches or better, and that didn’t happen with any BB — not even the Precision Ground shot. I think I’ve shot 5-shot groups with this BB gun in the past, and that may have given me false expectations.

Still, the Crosman M1 Carbine is a wonderful BB gun from the standpoint of realism and power. It comes from a time I fear we will never see again, and I lament the end of the era that produced such a fine BB gun. 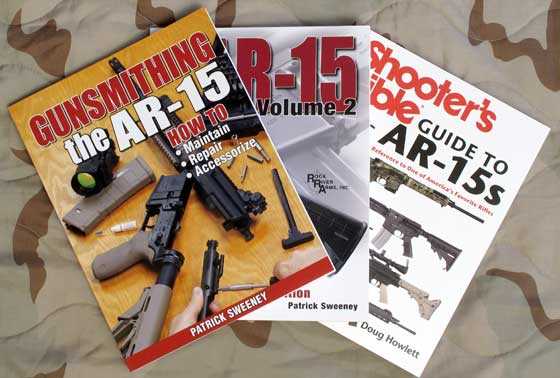 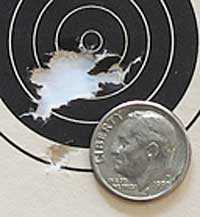