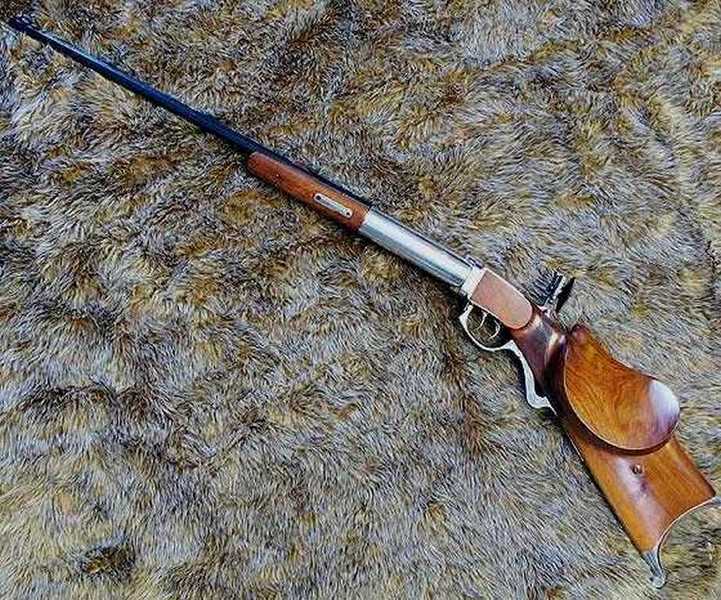 Larry told me to remove the screws on top and beneath the action that were obvious, then separate the two parts — action and stock. I removed 4 screws, and the action came loose from the stock a little bit. Then, it stopped cold. That was where I stopped working and set the gun aside. Yesterday, I picked it up and began from that point.

A bugelspanner (actually, correctly spelled buegelspanner or bügelspanner since the u has two dots — called an umlaut — over it) translates to a triggerguard-cocker. The triggerguard is pulled down to retract the piston and set the sear for firing. 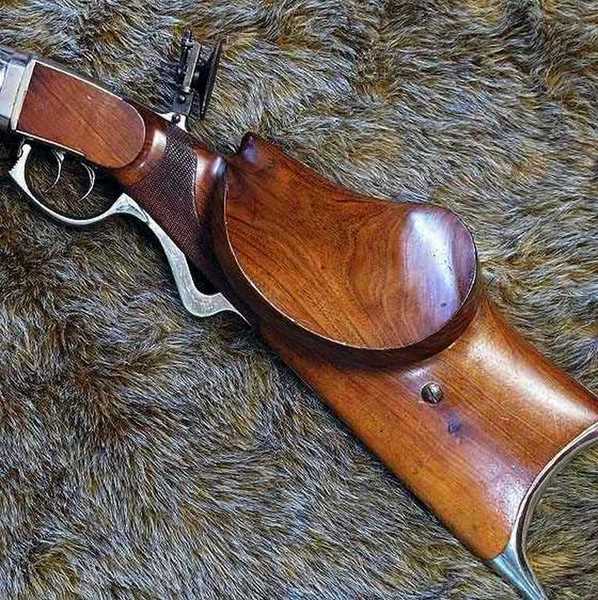 Triggerguard is up in the shooting position. 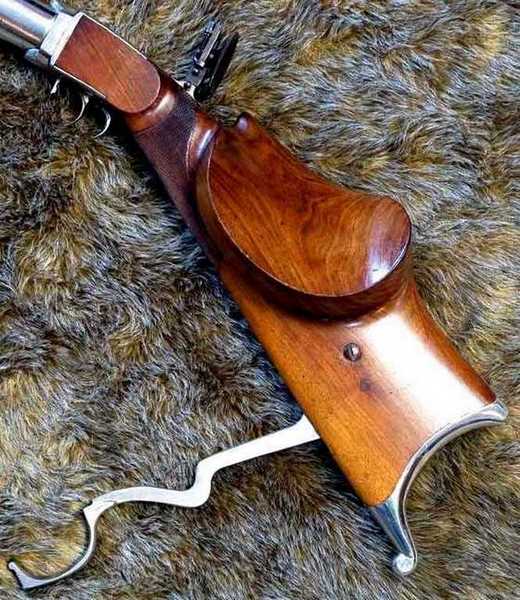 Triggerguard is pulled down to cock the springs.

The triggerguard lever is fastened to a pivoting axle bolt located in the back of the stock. The bolt shows in the photos above. Since this lever is connected to a linkage that’s connected to the back of a piston held under tension by powerful mainsprings, it made sense to me that it had to be disconnected from the piston for the stock to separate.

I removed the bolt that screws into a very long bushing inset into the opposite side of the butt. Then that bushing was tapped out the other side of the stock. But the cocking lever wasn’t quite free. At the top of the triggerguard lever, the cocking linkage passes through the lever and is prevented from coming free by a small screw that passes through one end of the linkage. I have arranged the two parts and their screw below for you to examine.

The triggerguard and cocking linkage, arranged as they are in the gun — I think! Until I assemble the gun, again, I won’t be sure of the correct orientation of the cocking link. 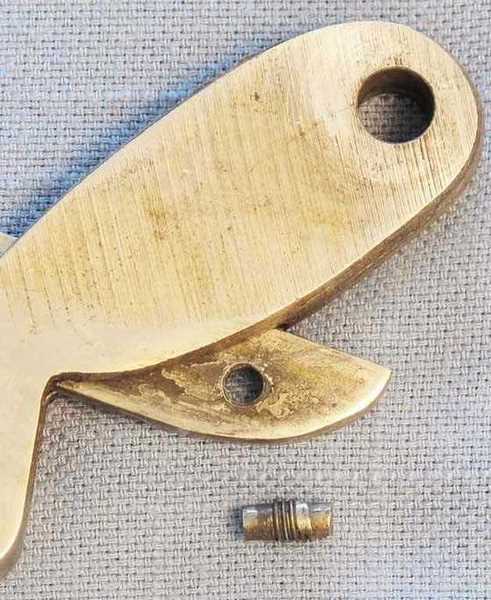 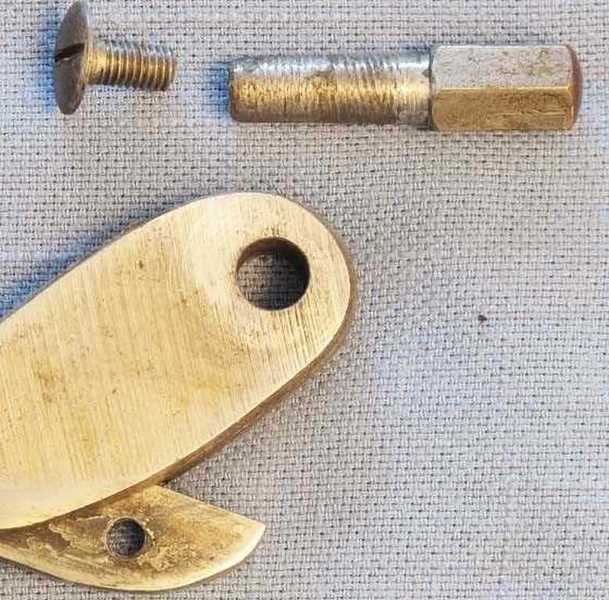 This is the triggerguard lever pivot bushing and screw on which the lever pivots when during cocking. Note the smooth band around the base of the bushing. We may assume that’s where the pivoting happens. 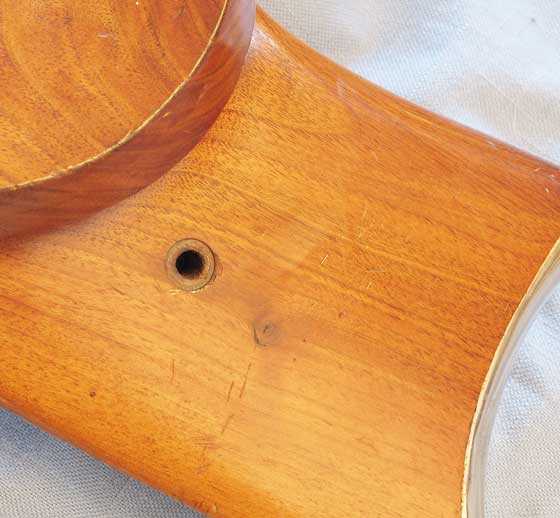 The screw and pivot bushing have been removed from the stock.

The entire underside of the stock is open, allowing room for the cocking linkage to move.

When I removed the cocking link from the back of the piston rod, I found the screw that attached the link to the piston rod was sheared in two, plus the rest of the screw was very mangled from pressure and work. Clearly, this part is too soft and also overworked. 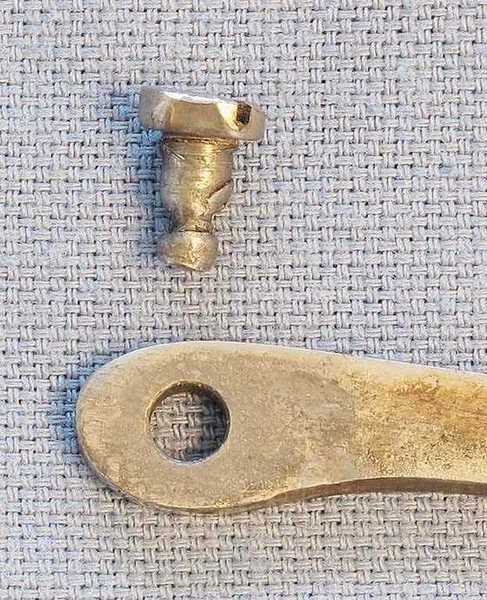 The screw that holds the cocking link to the rear of the piston rod is mangled and galled from too much strain. The threaded portion remains in the back of the piston rod and needs to be removed. This part may need to become a roller bearing.

The first part to come off the gun was actually the top action plate that also holds the rear sight. It is the anchor plate for 2 long screws and one short one that holds the action together. Once they were out, the plate didn’t come off without a lot of wiggling and some prying.

Three screws, and the top plate came off with the rear sight attached. 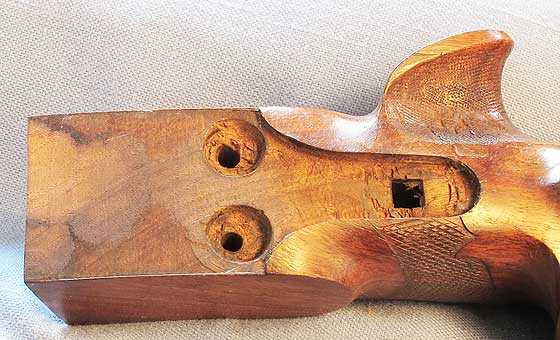 This is where the top plate came from.

The gun is now partially disassembled. The double-set trigger mechanism is exposed and can be disassembled and cleaned, but the piston is still under compression inside the compression chamber that hasn’t yet been separated from the barrel. To see the piston and mainsprings, The backplate that the piston rod passes through has to be drifed down out of its dovetail 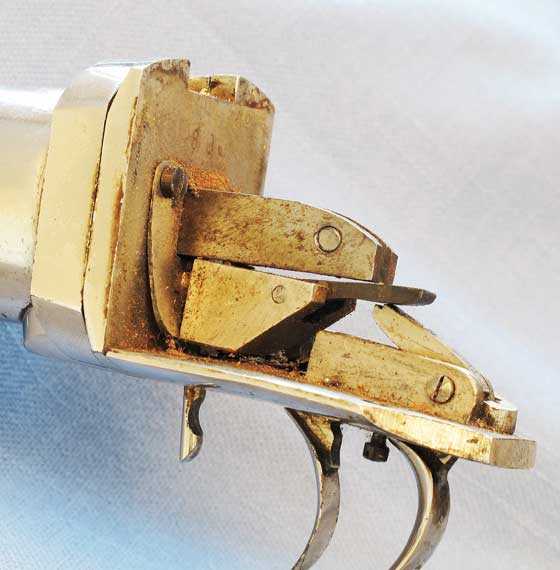 The double set trigger assembly is now exposed for cleaning and possible disassembly. To remove it from the gun, it’s tapped down, freeing its front dovetail.

I found the number 80 on many of the larger, unique frame parts. I believe that’s either a serial number or an assembly number to keep all the parts together because this gun shows a lot of handmade parts and hand-fitting.

When I open the barrel, I see some dark particles that I believe are small chunks of leather that have broken off the piston seal, so it may be deteriorating. And I need to look at the condition of the mainsprings, plus probably lubricate them just a little.

The bottom plate on which the double-set trigger sits is dovetailed into the frame (the rear of the compression/spring tube). It has to be pushed straight down to relieve tension on the mainsprings, and I do this with by tapping with a rubber hammer. The plate comes out of the dovetail easily enough; but the double volute mainsprings are under considerable tension even at rest, and the trigger plate and separate backplate fly off the gun along with the volute springs. 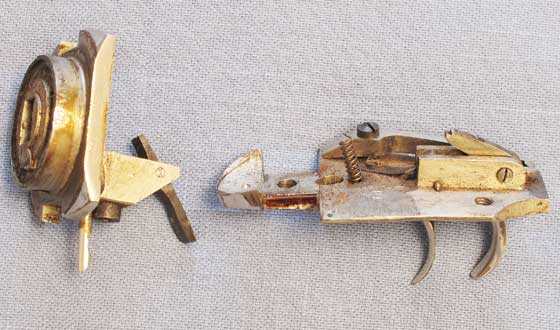 The trigger plate has a dovetail at its front that grabs the rear of the cylinder and holds the powerplant together. The cylinder back plate (left in the photo) is held between the 2 parts. The black part that’s flopping down on the back plate is the sear.

The piston can now be withdrawn, and I can see that the leather seal has, indeed, deteriorated. The part that comes in contact with the air transfer port is damaged from repeated impacts. I think I’ve found the reason the gun fired so roughly. 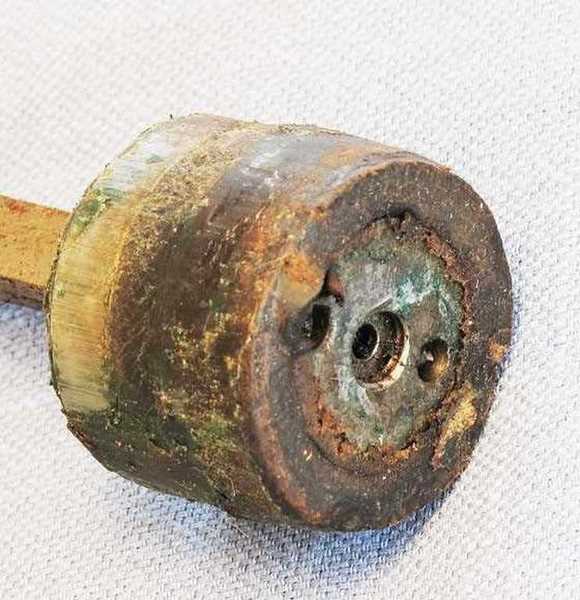 The leather piston seal has deteriorated. It looks okay, but it’s crumbling and flaking off. This is why the gun fires so harshly.

Double volute springs attached to a central guide for the mainsprings of the bugelspanner. They’re in good condition but very dirty and dry.

The double-set trigger has a weak front trigger leaf spring, which accounts for it not setting well and firing too easily. That will also have to be corrected.

The inside of the compression chamber is filthy, but it doesn’t seem to be damaged. A good cleaning is all it needs.

For many of you, looking inside this airgun is probably like looking at the dark side of the moon. So many of the parts appear foreign to your eyes. All that has really changed over the years, though, is how the parts are designed. They work in the conventional way that modern spring-piston parts work, so they must be corrected in the same way that a modern spring-piston powerplant would need to be.

There are numerous major repair jobs that must be undertaken before this airgun will shoot again. There’s certainly lots of cleaning, which is followed by careful lubrication of many of the parts.

Some new parts have to be fabricated, as well. That will not be an easy task, but it’s worth the effort. I know you were hoping to see a test real soon, but that’s not going to happen. I have to feel my way around this gun carefully; because if every job isn’t done right, the gun won’t work when it goes back together. I’ll go about the work methodically and take some pictures as I go, but I probably won’t report on the gun again until all the work is completed.