Announcement
The blog theme/look/feel is going to be updated today at 9:00 AM Eastern.

The new theme is mobile-friendly and should look/function much better on smart phones and tablets. It will also provide an enhanced download for computer viewing.

The current day’s blog will be the only one on the home page, but you’ll have links to the previous blogs in the upper left corner directly above the blog headline (in addition to the usual links in the right-hand column).

When you do a search on the blog, the search results page will list the blog headlines and snippets from the first few lines of each blog. To read more, you’d click on the headline link. Let me know if you have any issues or problems.

Boy, was there a lot of interest in Crosman’s 1077 CO2 rifle! I showed you my rifle, which has an AirSource adapter for an 88-gram CO2 cartridge, but I neglected to tell you that it’s obsolete. Crosman no longer makes this adapter. They only make the rifle for one 12-gram CO2 cartridge.

Someone asked me how to convert the rifle back to shoot 12-gram cartridges because he has only the 88-gram assembly (lucky him!) so I’m showing it here. 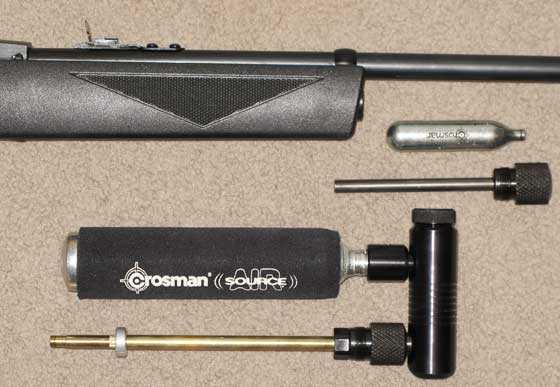 The conventional CO2 setup is at the top. A rod connected to the cap pushes the single CO2 cartridge against the face seal. The 88-gram adapter, seen below, replaces that.

12-gram cartridge didn’t work!
I set the rifle up to operate on a 12-gram cartridge so I could get a shot count for you, but it didn’t seem to work right. The velocity dropped from the first shot to the last, and I know I wasn’t getting good averages for the pellets I tested. You should get about 45-50 good shots per cartridge from this rifle when it works right.

Switched to 88-gram cartridge
I installed the 88-gram cartridge that’s several years old and shot this test with it. The ability to turn the adapter off after every use gives indefinite life to the cartridges.

Crosman Premier lite pellets
Crosman Premier lite domed pellets weigh 7.9 grains — the same as many other Crosman lead pellets. They’re analogous to other Crosman pellets as far as velocity goes. They averaged 611 f.p.s. in my 1077, but the spread was large — from a low of 575 f.p.s. to a high of 631 f.p.s. That’s a total spread of 56 f.p.s. I think a lot of the variation is due to uneven seating in the 12-shot circular clip, because there’s a lot of resistance until the pellets are pushed past the lip of the chamber. Premiers are made from hard lead alloy. If they’re going to resist, it will be noticeable.

At the average velocity, this pellet generates 6.55 foot-pounds of muzzle energy. Remember, with a gas gun, the heavier the pellet, the more energy the gun develops, as a rule.

RWS Hobby pellets
RWS Hobby pellets weigh 7 grains and are made from pure lead, so you would expect them to go faster than the heavier Premiers. But they didn’t. The averaged 606 f.p.s. in the test 1077 with a low of 592 f.p.s and a high of 629 f.p.s. The spread was a little tighter with this pure lead pellet — at 37 f.p.s. That’s still a lot for a CO2 gun.

At the average velocity, Hobbys generated 5.71 foot-pounds of energy at the muzzle. They’re lighter and develop less energy than the Premiers.

Air Arms Falcon pellets
The final pellet I tried was the Air Arms Falcon dome. At 7.33 grains, it’s light enough to get good velocity and usually accurate in lower-powered airguns.

Trigger-pull
The 1077 trigger is a double-action-only trigger that has a pull of 8 lbs. on the test rifle. The pull weight is governed in part by the magazine that contains part of the revolving pellet-feed mechanism the trigger must operate with each pull. As the magazine breaks in, the trigger-pull becomes smoother and lighter — but only to a point. Mine is pretty light right now, but an older 1077 I own has a pull that’s about a pound lighter. And that’s about as good as it gets.

Overall evaluation thus far
My 1077 seems to be operating about the same as it always has. I don’t know where it falls in terms of velocity compared to a brand-new gun, but if I had to guess I would say it’s on the slow side.

The one thing that these rifles have is accuracy. I hope to show that to you in the next several reports. The bottom line is that the 1077 is an all-time classic air rifle. It’s the perfect short-range plinker. Once optics are mounted, the accuracy may surprise you.