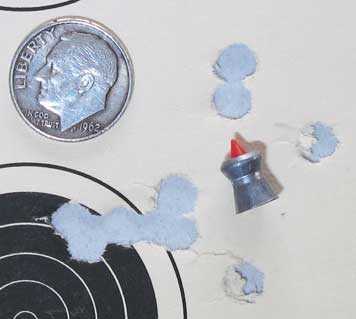 This is the final test of the Hatsan BT65 QE. I’ve enjoyed working with this rifle. Once I got the silencer issue sorted, the gun became quite accurate. Today, I’ll try some other pellets, and I’ll also try a group at 100 yards. The silencer parts are still out of the shroud, so there’s nothing to hinder the flight of each pellet.

I tried the 35.8-grain .25-caliber Eun Jin dome first. Because of the rotary magazine, I was concerned this long pellet might not fit, but it did. It fit fine. And it cycled through the action without a fault. But accuracy was a different story.

These pellets went everywhere except where they were aimed. Only 6 out of 9 stayed on the target paper I was using; but since I had a paper backer, I could judge that the whole group was something like 4 inches between centers of 9 shots at 50 yards. It’s not a pellet I would recommend for this rifle. Given their power, it would have been nice if these Eun Jin pellets were more accurate; but there are several other very accurate pellets to choose from, so it isn’t a deal-breaker.

The Predator Polymag was a pellet I really wanted to try in the Hatsan. They’re surprisingly accurate on some powerful precharged rifles, so the BT65 was the ideal candidate for a test.  Five were pretty close, but all 9 of them went into a 1.403-inch group at 50 yards. While they aren’t bad, they aren’t especially good, either.

Then, it was back to the pellets I know are the best in this rifle — the .25-caliber JSB Exact Kings. By this time, I’d screwed with the scope settings so much that the pellets were not hitting the point of aim. That’s good, because then I don’t destroy my aim point, but it’s bad when I want to hit something other than paper.

A dobsonfly (a large insect that some might call a dragonfly) landed on one of my targets, giving me a target of opportunity. But the scope was set up with the point of impact intentionally off, so I had to shoot 3 times to walk the pellets in. Amazingly, the insect remained still as this was done. I know it sensed at least one of the pellets zip through the paper next to it because it fluttered its wings a bit. Shot 4 landed smack on the large predator’s body and left a brown smear on the target. 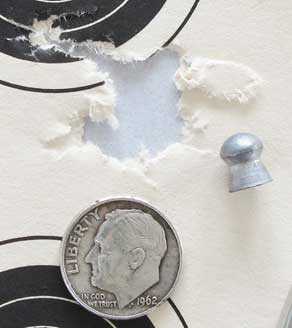 Nine JSB Exact Kings on the first magazine after a fill went into 0.79 inches at 50 yards. 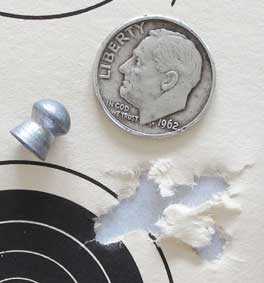 Five JSB Exact Kings from the second magazine after a fill went into 0.578 inches at 50 yards.

So without further ado, I walked down to 100 yards and put up a target. When I got back to the firing line, I proceeded to put 9 JSB Kings into 1.687 inches. This group landed on the centerline of the scope, but I was elevating the reticle 4 mil-dots. 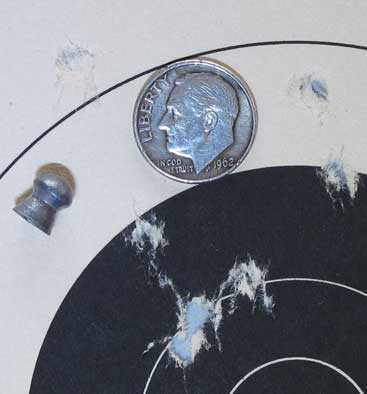 Even at 100 yards, 9 JSB Kings from the first magazine after a fill still went onto 1.687 inches between centers.

The Hatsan BT65 is a worthy .25-caliber repeater. The one I tested had accuracy problems until I removed the silencer parts, clearing the path for the pellets. If I owned this rifle, I would simply enlarge a couple of the holes in the baffles and put the parts back in the shroud. I’ve fixed other PCPs this way, and I know how easy it is to do. But I don’t own this gun, so I left the parts as they were.

With the baffles installed, the rifle is certainly quiet. The report doesn’t give much indication of all the power that’s on tap.

Hatsan says the rifle is protected against double feeds — where 2 or more pellets are fed into the barrel. I found that to be true only when the rifle is carefully cocked. You have to pull the bolt handle all the way back like you mean it. It became second nature to cock it correctly after a while, but don’t think that a double feed can’t happen — because it can.

The accuracy is stunning! You get what you pay for as long as you stick with the right pellets.

The trigger is fine and adjustable. It’s a sporting trigger — not a match trigger, but you shouldn’t have any reason to complain about this one.

The bottom line is that the BT65 is a good air rifle that performs as intended. It’s worth your consideration.