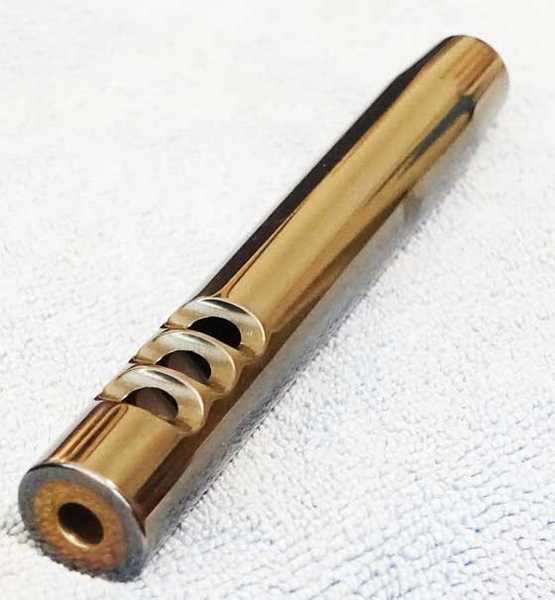 I was pleased to see so many readers got something from the first part of this report on the tuneup of my Beeman R1 rifle. Several of you commented on how much work Bryan Enoch had put into the gun, and I think that is an important thing to take away. You have seen guest bloggers and even me tune spring guns over the years, but never to the degree that Bryan devoted to this rifle. That just illustrates that there are all levels of things that can be done to a spring piston air rifle, and you can pick and choose what you want to do and what you want to spend doing it. What you see in this report is a top tune.

Today we will look at the rifle’s performance, which means the velocity. Before we test that, though, you need to know what I asked Bryan to do. I told him I didn’t care about the power of the rifle. I have plenty other airguns that develop greater power. What I wanted was smoothness. We’ve already seen some of that in Part 1, when I talked about how smooth the gun is to cock. Today we’ll see what it does when it shoots.

A brand new Beeman R1 rifle cocks with about 40 pounds of effort, or so. After a thousand shot break-in that drops to around 36 pounds and doesn’t get any lighter as long as the factory spring remains in the gun. My tuned rifle now cocks with 30 pounds of effort. And the cocking is smooth all the way through the stroke. Once the needle on the scale hits 30 pounds, it stays there until the piston is latched.

I was asked whether I really meant bronze when I described both the mainspring guide and top hat. Yes, both guides were made of bronze and not brass. Bryan was very specific about that. There are also brass parts on the gun. Things like the screw cups that Bryan calls escutcheons, and the new safety button are brass. But both spring guides are bronze.

Don’tcha wanna know how it works?

Okay I can’t stand it any longer. I want to know how this new tune works. Let’s begin with the Crosman Premier pellet — a favorite in a .22 caliber R1.

Some of that spread comes from the freshness of the tune. A spring piston rifle usually takes a few hundred shots to settle down after it’s been tuned. But I think this tune may not do well for Premiers. I say that because of what happened with the next pellet.

I will say the Premiers fit the breech tight. That may be a factor in the velocity spread.

The JSB pellet fit the breech loose. They were just snug enough to not fall out. They really felt better than the Premiers when loading.

The tighter performance of the JSB is more proof that the rifle isn’t suited to the Premier with this tune. If the Premier pellet was better-suited, it should have done better than a 29 f.p.s. spread.

The last pellet I tested was the RWS Hobby. These fit the breech tighter than the JSBs, but not tight. Weighing 11.9 grains, they are one of the lightest lead pellets on the market, and like their .177 siblings, they are often surprisingly accurate at close range. Hobbys averaged 796 f.p.s. in the tuned R1. The spread went from a low of 792 f.p.s. to a high of 801 f.p.s., so 9 f.p.s., overall. At the average velocity Hobbys developed 16.75 foot pounds at the muzzle.

Like the JSB pellets, the Hobby demonstrated that the R1 can hold a consistent velocity. So, the wide spread of the Premiers has to be the pellets and not the rifle. That’s good to know for the next test, which will be accuracy.

Back before the R1 book was written, I was publishing parts of what would be in the book in my monthly newsletter, The Airgun Letter. Ivan Hancock, the man who was the world’s most famous spring gun customizer at the time, read the articles and sent me his Mag-80 Laza kit to try in the rifle. He also sent a custom muzzle brake for the gun after it was finished. You can see that brake on page 148 of the R1 book.

Well, as I explained in Part 1 of this report, this rifle has been a work in progress for the past 19 years. So the muzzle brake was never installed. I have kept it just for this occasion — when the tune was done and I was satisfied. I also said I would have the rifle reblued with a high polish, but I’ve changed my mind about that. I think the rifle is ready for the brake.

The brake will be an interference fit on the barrel. That’s another reason I never installed it. You get just one chance to do it right. so I want to take my time installing it. Maybe even consult with someone about the best way to proceed, to make sure the vents are oriented correctly.

The trigger pull can be what I want it to be, within the adjustment parameters of a Rekord trigger. Byran said my trigger was set light when he received the rifle. He cleaned it and lubricated it, as well as polishing the piston rod and the trigger hook that holds it. Neither of the latter steps will affect the trigger pull but Bryan did them because he likes doing a clean job. They just look better polished.

He set the trigger to break at 1 pound 2 ounces. When I tested it my gauge said 1 pound 4 ounces. I’m going to leave it where it is, because like the rest of the tune, it will need a few more shots to settle in. The break of stage 2 is crisp and without creep. It’s a Rekord trigger, which should be all I need to say.

When I showed you all the new parts in Part 1 of this report, the new safety was there, also. It is brass and I mentioned it, but I didn’t say a lot about it. Now that I’ve had a chance to work with the rifle a bit I appreciate the new safety a lot more. 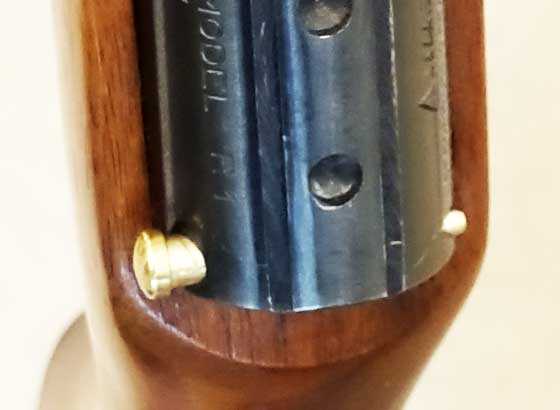 The brass safety button made by Bryan Enoch is wider and sticks out farther than the factory safety. It’s also easier to operate. The safety is not on (gun is not cocked) in this photo.

The thumb button is wide and sticks out far from the end cap. That makes it easy to push off, which the original is not. But it also operates a lot smoother than the Weihrauch safety button

That’s it for today. Next time I will scope the rifle and we will start to accuracy testing. I’ve said before that a tune never changes the accuracy of an airgun. This time should prove or disprove that point.