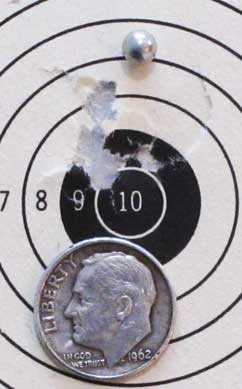 The Pelletgage comes in .177 and .22 caliber at the present. A gage to measure BBs is coming.

This report was unplanned. I was getting my Beeman R1 prepared for a return to the 25-yard accuracy test for today when a shocking development popped up. At least it was shocking to me. I’ll let you decide for yourselves.

Jerry Cupples, the Pelletgage maker, is working on a BB gage that will do the same thing as the Pelletgage, except BBs don’t have heads. The BB gage will measure the outer circumference of the BB, allowing shooters to sort BBs by size. Think about that for a moment.

Where lead pellets can be remarkably accurate, the common steel BB has limitations that everyone knows and accepts. BBs just aren’t that accurate. Except for one. Daisy’s Avanti Precision Ground Shot can be stunning when fired from a Daisy Avanti Champion 499 BB gun at 5 meters. We all know that from numerous tests I have conducted for this blog.

Almost no one has a reason to sort steel BBs by size. The one exception would be these BBs. Thousands of kids compete each year in Daisy’s National BB Gun Championship Match competition that culminates in Rogers, Arkansas. There, the best shooters from around the country gather to find out who is the fairest in the land. Surely those kids would embrace any advantage they could. What if sorting BBs by size gave them that advantage?

They must be uniform — right?

I figured that trying to sort these Precision Ground Shot would be about as exciting as a priest taking confessions at a convent. How much difference could there be? Boy, was I shocked to learn the answer!

Not only are these match BBs not uniform, they are all over the place! Let’s look.

Knowing that the BB gage was coming, I decided to test-measure a few Precision Ground Shot with calipers — just to verify my feelings of their uniformity. The first few measured 0.173-inches on the nose. My electronic caliper reads in ten-thousandths, so I would have known if these BBs were off by even that slight amount. But they weren’t — at least not initially.

I measured each BB at several places on its diameter. A spherical shape is far easier to measure with a caliper than the chord of a round pellet head, so this went fast. At some point I switched the readout from inches to millimeters. Now all the BBs measured 4.39mm.

Then, one didn’t measure 4.39 mm! It was 4.38 mm. Oh, well — I figured this one was the odd one that slipped through quality control. Maybe there is a need for the BB gage after all. Then another one didn’t measure 4.39 mm. This one measured 4.41 mm. Then another and another, until I was gathering a pile of BBs that were everything except 4.39 mm.

I was still measuring at several different places on the diameter of the BBs when I found one that ranged from 4.39 mm to 4.41 mm. Not only was this one odd-sized — it was also out of round! I wondered how many more like it were in the box. Quite a few, as it turned out.

When all was said and done, I spent perhaps 45 minutes and checked 65 BBs. By far the largest group was out of round and measures anywhere from 4.38 mm to 4.44 mm — sometimes on a single BB! The total distribution looks like this. 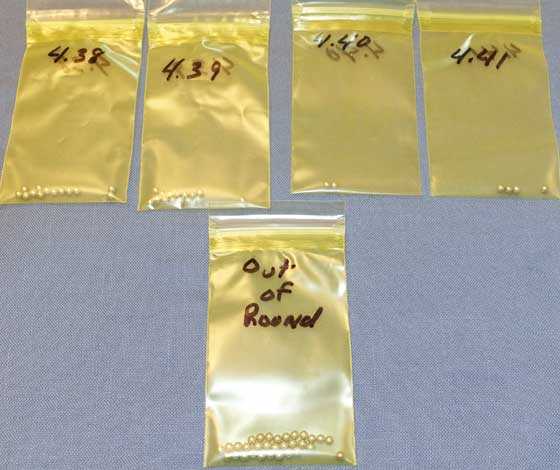 Instead of being uniform, the Precision Ground Shot varied greatly in diameter.

That was not what I expected. I hadn’t even planned on measuring that many BBs. But when I saw the results, I couldn’t stop.

Well, the rock has been turned over and now we see what’s underneath. Where do we go from here? I have been testing the 499 for about 15 years and never had a clue what I was shooting in it. I knew the Precision Ground Shot were more accurate than other BBs, and I could tell they took the longest to roll down the barrel at loading, so they must be larger. There were differences in the amount of time they took to roll down the barrel, but I never gave much thought to what that might mean. Now it’s like an accident on the highway. I can’t just drive by — I have to look.

I shot seated, with the gun rested on the UTG monopod. Each of the 30 shots released as good as I could expect. I am not a great shot, but if the difference between the groups is large, we will know or at least suspect the BBs have something to do with it.

First up were 10 BBs that were out of round. They varied in size from 4.38 mm to 4.44 mm — sometimes on the same BB! I made no attempt to select them — just shot the first 10 out of the bag. These rolled down the barrel at varying speeds, so I could tell they weren’t the same size. Most were slow, which I would think is desirable, but the target will tell.

Ten BBs made a group that measures 0.35-inches between centers at 5 meters. I put wide cellophane tape on the back of the target to preserve the hole made by the BBs. While this is a pretty good group for me, I note that all the shots landed high on the target. That will become apparent as the test progresses.

Ten out-of-round BBs went into 0.35-inches at 5 meters. Notice how high they landed on the target.

Next I shot 10 BBs that measured 4.38 mm diameter. These had been checked for size in several different places. so I believe they are really spherical. Ten went into 0.294-inches at 5 meters and, while they are still high on the target, they are not as high as the first group. 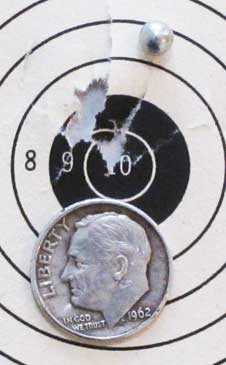 The last BBs I shot were those that measured 4.39 mm in diameter. Remember that I measured each of these BBs in several different places, and if there was any variation whatsoever, they were put into the out-of-round group. This time 10 BBs went into 0.525-inches in the center of the bullseye. This is the largest group of the test by far and also the one that landed lowest on the target. 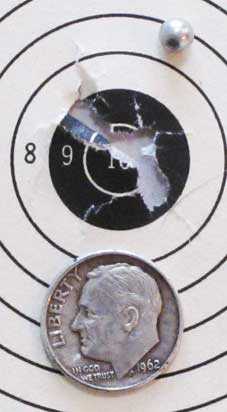 Ten 4.39 mm BBs went into 0.525-inches at 5 meters. These BBs are the most centered on target, but also the largest group by far.

Once again I caution anyone from making definite conclusions about these few results. All they have shown me is there might be an accuracy difference between sorted BBs and unsorted BBs. And if the 4.38 mm BBs continue to group like they did, a sight adjustment would result in a perfect score. That can’t be said about either of the other 2 BB groups that were tested.

If I were a competitor in this championship, you can be sure I would be sorting BBs. In fact, I now wonder whether the other premium BBs on the market can be sorted to produce similar results in the 499? I think this opens up a whole can of worms as far as BB gun accuracy is concerned.

Jerry Cupples, you need to develop that BB gage. I think the market is ready for it.