Today is the big day! Today I test Geo791’s .22-caliber Diana RWS 34P air rifle to discover how accurate it is. I have been thinking about this test for a long time and have come to the conclusion that there is just one thing I want to know — how accurate is this rifle and is it consistent? That sounds like two things, but it’s really two parts of the same thing. Is this air rifle accurate enough to kill pests?

We have had many conversations on this blog about the level of accuracy needed for that purpose, but I said I wanted to see the rifle put 10 shots into a group that’s under an inch at 25 yards, when open sights are used. I don’t need to see that accuracy with many different pellets, either. If I were to go that route, this test could turn out to be a lifetime affair! I’ll let Geo791 do that, as the owner should.

I also don’t need to know why the rifle is inconsistent — if it turns out to be. I will check certain basic things such as stock screw tightness and pivot bolt tightness, but I’m not going to make a career out of this. The rifle is what it is, and today’s test will hopefully reveal that.

At the end of today’s test I will have to determine the next step for this test. This was always going to happen and now we have come to it. So, let’s get started.

Since the criteria for acceptable accuracy is group size at 25 yards, I will start at that distance. I could start at 10 meters, but Diana 34Ps are fairly consistent in my experience, so I believe I’m safe starting at the longer distance. Maybe if this was a Chinese spring gun I had never seen before I would start at 10 meters, but I think I’m safe doing it this way. We’ll see.

The stock screws were all properly tight. And the pivot bolt was tight enough that the barrel remained in any position, after the rifle is cocked. George has taken good care of his rifle.

The rear sight is adjusted a quarter of the way over to the left, which means the rifle was shooting to the right for George. He told me he preferred using a scope, but when I asked him to, he also tried the open sights. There is also some elevation dialed in. Because of that, I will fire a shot at a closer distance, just to make sure I’m on the paper.

For the bulk of this test I will shoot off a sandbag rest at 25 yards, using the artillery hold. I will start with my off hand out by the cocking slot, for greatest stability, and I will adjust from there, if necessary.

The first shot was from about 12-13 yards and the hole was centered on the bull, but two inches below. I took that as okay and went back to 25 yards. I cranked about 5 clicks of elevation into the rear sight and shot again. This shot was about a half-inch higher and off to the right a half-inch. I cranked in about 8 more clicks of elevation and shot again. This one was level with the bottom of the bull, but 1.5 inches off to the right of the centerline.

I adjusted the elevation 6 more clicks up and the windage 6 clicks to the left and shot again. This shot was in the black, just above the 10-ring. I was sighted-in and so this last sighting shot was also the first shot in my first 10-shot group. 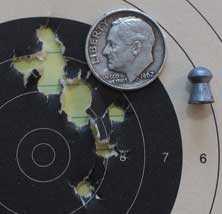 For the second group, I slid my off hand to the middle of the 34P’s long cocking slot. This time 10 JSB Exact Jumbo Heavies went into 1.215-inches. Eight shots are in 0.611-inches. That screams accuracy to me. It also suggests that the hold isn’t quite right. Notice that the largest sub-group within each of these first two 10-shot groups is similar in size. Is that consistency? I think so. 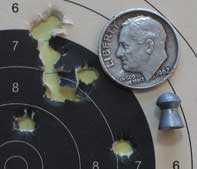 For this group my off hand was resting at the rear of the cocking slot, which on a 34P is very far back. This time 10 shots went into 1.119-inches between centers. The sub-group has only 6 shots in it, but see how tight it is! I won’t measure it since almost half the shots are outside it, but remember it. Also note that the point of impact has shifted to the left. All of this is due to the off hand resting about two inches behind where it was for the last group. 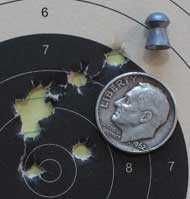 I decided to try a different pellet to see if that might tighten the groups even more. I went with the H&N Baracuda Match with a 5.53mm head. Ten of them made a 1.336-inch group that’s well-centered on the target. Seven of those pellets are in 0.565-inches in the center of the bull, which tells me this is another pellet to check further.

I tried RWS Superdomes next. Ten of them made an open group that measures 1.458-inches between centers. Nothing in this group excites me, so I will move on. 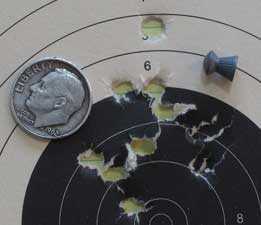 Strain of the test

At this point in the test I was getting tired. Not that shooting 53 shots with a Diana 34P is hard, but the level of concentration I had to maintain to shoot my best with open sights was exhausting. My blood sugar level had dropped too far and I was starting to shake. I had to stop and eat something to boost my blood sugar, so I rested for about 10 minutes. While I did I was able to reflect on the test results so far. They seemed to point to the JSB Exact Jumbo Heavies being a good pellet to continue with and I had one more artillery hold to try — with my off hand back by the triggerguard.

This group was shot with 10 JSB Exact Jumbo Heavy pellets. My off hand was back, touching the front of the triggerguard. When I was finished I walked down to the trap, wondering what awaited me.

What I saw was 10 shots in 0.76-inches! Now THAT is a group! Especially when it’s the sixth group I have shot with open sights at 25 yards! 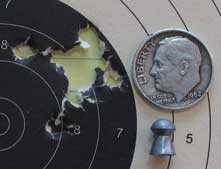 Ten JSB Exact Jumbo Heavies in 0.76-inches. This group proves the accuracy of the rifle that’s been trying all along!

George — your rifle is accurate. It is also consistent. We know that because open sights can’t wander the way an improperly mounted or adjusted scope can. So, the groups you see here are real — not variable because of a wandering reticle. They are not as tight as your rifle will shoot, I am sure, because I can aim more precisely with a good scope. But now we know the rifle is sound. That sets us up for Part 4, which will be a tune of your rifle with the Vortek kit.

I can’t tell you how pleased I am that things turned out this way. It’s always possible for any airgun to have a problem that has to be corrected before it will shoot like it is supposed to, and the 34P is such a simple rifle that I didn’t know what could possibly be wrong. But I don’t need to worry, because this rifle is exactly where it should be.

If this was a test of a brand new rifle I would now be praising its accuracy. Remember — these are 10-shot groups They are approximately 40 percent larger than 5-shot groups with the same rifle. And they were all shot start-to-finish — I didn’t just shoot a bunch of rounds and then draw a circle around the tightest 10.

I have wanted to do a test like this for two decades! I never know when someone tells me they are having accuracy problems whether it’s them, or the rifle, or the scope or even something else. When I worked at AirForce I took all the phone calls from customers about their new rifles that were inaccurate. Most of them were resolved in minutes over the phone. They were procedural things like over-pressurization, improper scope mounting and even using the wrong pellets. Every once in a while someone had “modified” their rifle and wondered why it wasn’t accurate. Then I had to become a detective over the phone. That took a lot longer, and sometimes they were unwilling to even admit they had done anything until I asked them to return the rifle. Then they would confess what they had done, because they knew I was going to see it eventually. Usually it was at the heart of the problem.

George — you don’t have that problem. This rifle is accurate.Your problem is more than likely a scope mounting issue and I have plans how to solve it. Diana breakbarrels have a lot of barrel droop, and the 34 is the poster-child of that condition. But I know it up front, so we don’t have to waste time finding it.

George also sent me batches of the three pellets he has been shooting in this rifle. I didn’t shoot them today, but when I get the rifle tuned and a scope mounted, I will shoot a group with each in the final accuracy test. The tuneup is next. 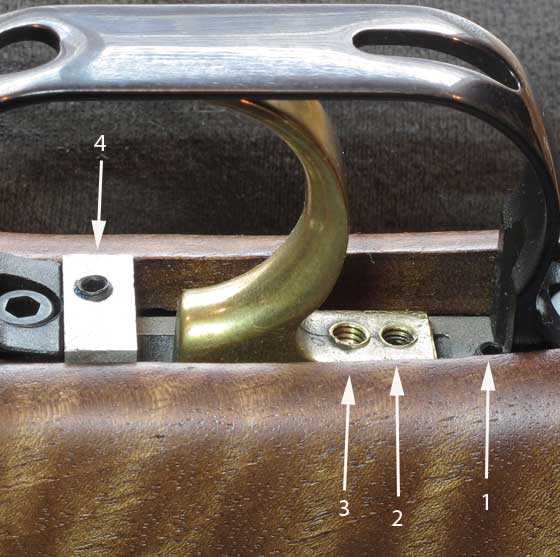 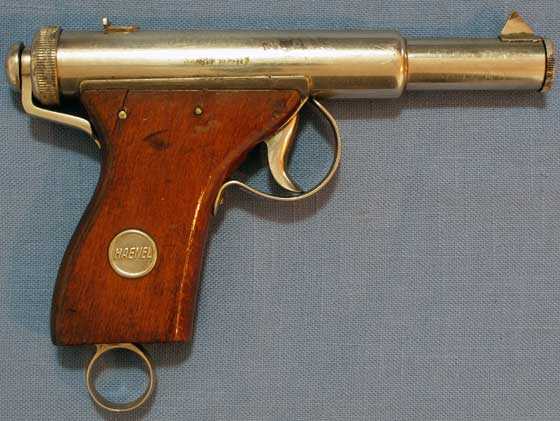