Sometimes I write these historical reports about airguns that many of us know and have either owned or wanted. The Beeman R8 is one example. American readers could have bought one when they were new and readers from other parts of the world could have bought the now-obsolete Weirauch HW 50S that it was based upon. Both air rifles are no longer produced, but used examples should be available in their respective markets. And Weihrauch does still make a rifle they call the HW 50S, although it is based on a different platform.

Then there are times when I dredge up some strange airguns that few of us have ever seen. The Lov 21 target pistol I recently reported on is such a gun. Unfortunately I have jammed the CO2 fill cap in the gun and am still trying to extract it so I can write the accuracy report. That one will have to wait, but it wasn’t the only odd duck I found at the Findlay airgun show this year. Today we start looking at a scarce and little-known BB pistol that Crosman once produced — the V-300.

For those who care

After I bought the pistol at Findlay I showed it to Tom Slocum, who was also at the show. Tom is a well-known advanced Crosman collector and rebuilder of vintage Crosman airguns. He congratulated me on buying a rare BB pistol and cautioned me that the aluminum cocking lever on this pistol often breaks. It is a weak link. Not many V-300s were made, and the cocking levers broke on many of them, making it even rarer. This one is in 94 percent condition, with minor paint loss on a few of the edges of the frame. It’s one of the nicest ones you will see. If I had the original box and manual I would have a real collectible! I’m going to take to heart Tom’s caution about the cocking lever and handle the pistol with kid gloves.

I am about to tell you more about this airgun than I believe has ever been written. If there are other articles, I have been unable to find them. On the other hand, the pistol itself seems to sell for very little. Even in a box I’ve seen them go for as little as $40. As rare as they are, they should sell for $250 in the box.

In 1960 Crosman brought out a BB-gun platform called the V-350 that lasted for more than a decade. The V-350 was a long gun (a rifle, if you like), and when its production ended in 1968 it was replaced by the V-3500. I don’t know how long that one lasted, but certainly into the 1970s. Information in the Blue Book is quite thin on this model.

The V-350 is a plain little gun. Nothing much defines it, other than the fact that it shot BBs at 350 f.p.s., which was very brisk for the time. It uses a push (or pull) barrel action to cock the mechanism — much like the many Quackenbush airguns of the late 19th and early 20th centuries. But the valve is unlike anything I have ever seen. It seems to operate like a poppet, containing the pressure of the piston until it blows open violently at the end of the piston stroke. Maybe someday we will get lucky and someone will share pictures of this strange valve.

The V-350 spawned the well-known Crosman M1 Carbine that is just a dressed up version of the plainer BB gun. There was a lot of potential to do the same thing with many other vintage firearms. I’m surprised Crosman didn’t do more of it, but I think I know why they didn’t. All of these BB guns have the same push-barrel cocking that was and is too hard for children. Even many adults find it difficult. The tendency was to put the palm of your hand over the muzzle to cock the gun, which is dangerous! Smaller kids would even rest the butt on the ground and use their body weight to push the barrel back — aiming the muzzle at their chests! I think that’s a sound reason to take a BB gun off the market.

At the same time as the V-350 was being made, Crosman also built an equivalent BB pistol they called the V-300. It was only produced from 1963 to 1964, according to the Blue Book.

It has a similar firing mechanism to the long guns, but instead of pushing the barrel back to cock it, the V-300 has a backstrap lever that is pulled to cock the gun. This lever is caught at several places (three — I counted them) in its cocking arc by a ratchet mechanism, to prevent the lever from smashing the hand if released too early. Like the long guns, the pistol is hard for an adult to cock. I have no idea of how kids were doing it!

By this time clever readers have decoded the basic model name of the long gun and know it refers to the expected velocity. That only holds for the V-350. The V-3500 is simply a revised version of the 350 — it doesn’t shoot BBs at 3500 f.p.s.! And the M1 Carbine takes its name from the military rifle it copies. But what about the V-300?

The V-300 indeed does shoot BBs at 300 f.p.s. — or is expected to. In its day that made it red hot. It’s still pretty brisk today, though CO2 pistols regularly surpass it. But back in 1963 there weren’t many CO2 BB pistols, so this powerful spring pistol stood out.

Like the V-350 family the V-300 is a 23-shot repeater, though just like all of the long guns it must be cocked for every shot. To load there is a sliding cover on top of the gun that might confuse some people. sliding it forward opens a hole on top of the barrel, about three inches behind the front sight. That hole is for oiling the gun. Remember, this is a BB gun and they need a lot of oil to keep their power up! I dropped several drops of Automatic Transmission Stop Leak in my pistol to condition the thin rubber flap in the poppet valve, then I stood the pistol with its muzzle pointing straight up.

When the loading lever is slid forward, it opens the oil hole (arrow) where the gun is oiled frequently.

The pistol is loaded through a hole located just behind the front sight. That hole is opened and closed by the same sliding lever that opens and closes the oil hole just mentioned. The V-350, V-3500 and M1 Carbines all have the same oiling/loading holes. 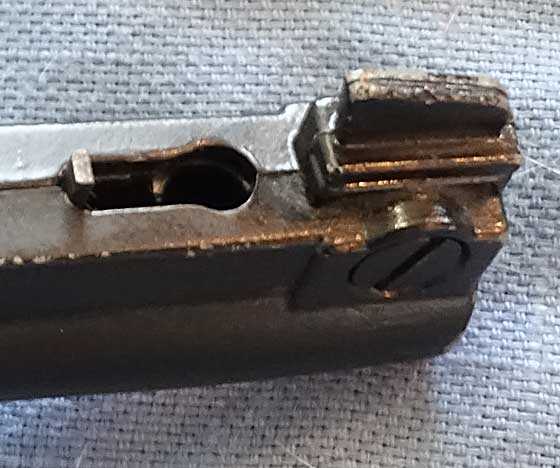 The sliding lever is slid back to open the hole where the BBs are loaded.

The pistol is cocked by pulling back and up on the backstrap lever. Three ratchet stops protect the hand from being pinched if you slip. I don’t believe this pistol would be that easy for anyone who is not in their teens and even some adults might be challenged. I will give the cocking effort in Part 2. 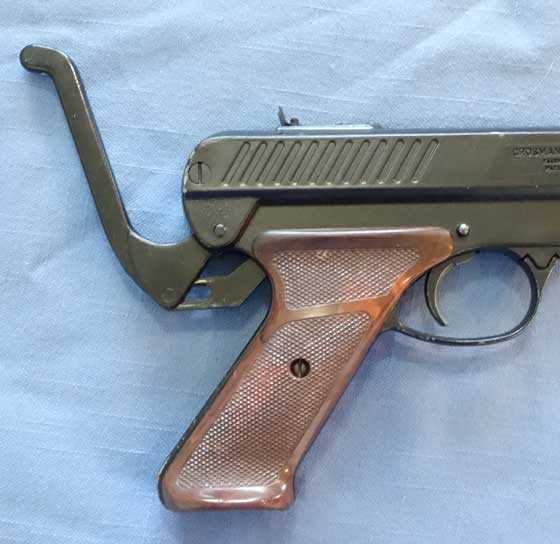 The aluminum backstrap and cocking lever is pulled back and up to cock the pistol.

The front sight is a squared-off post that’s part of the (aluminum?) clamshell frame/housing that makes up the outside of the gun. The rear sight is an open notch that adjusts for windage by loosening screws and sliding the parts. Elevation is a simple headless screw through the rear sight leaf that lifts the notch as desired. Owners of Crosman air pistols from the same timeframe will be familiar with these sights. 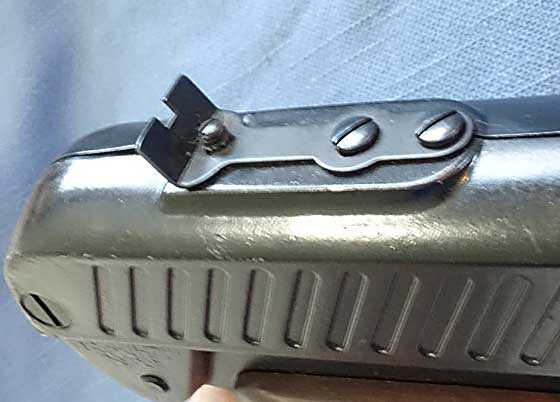 Crosman fans will recognize the shape and function of the V-300 rear sight.

The V-300 is a large air pistol. It’s 13 inches long by 6.25-inches high. It weighs 2 lbs. 2 oz. The grips are Crosman’s very ergonomic (for right-handed shooters) pistol grips. They would feel familiar to everyone who owns a Crosman 600 pistol.

The V-300 is made with a 2-piece clamshell of a metal I believe is aluminum. This shell is held together by at least 3 large screws whose heads are visible on the right side of the gun. It seems the left shell was laid down, then the parts that comprise the mechanism were laid in that shell and finally the right shell was attached. Ironically we saw a similar assembly method in the Lov 21 pistol, only the clamshells on that gun were plastic.

I have already given you more information than I believe has been published on the V-300 in the past 10 years. And we are just getting started. My plan is to test this rare old BB pistol gently but thoroughly before returning it to a safe resting place.