Umarex Throttle offers a lot for a little money.

I’m back. I said at the end of Part 3 that I wanted to test the Umarex Throttle air rifle at 25 yards and today is the day.

It’s been a long time since I shot the Throttle, so I had to experience it all over again. First I note that the rifle cocks easier (28 pounds) than the 16-18 foot-pounds of muzzle energy would normally require. Umarex engineers got that part right.

I do like the trigger. Though it feels heavier than I’m used to, it breaks crisply, which helps accuracy.

I found that I like the scope, although I had to adjust it for today’s test. Once the parallax was set I discovered that the eyepiece was way off for me. The crosshairs appeared double on the target. I unscrewed the eyepiece at least a quarter-inch and everything sharpened up. My aiming was precise from that point on. For a scope that comes in a bundled deal, this one is surprisingly nice.

I don’t care for the hollow, isolated feel of the action in the stock, which is the Throttle’s main reason for existence. The whole purpose of the gun is to isolate the shooter from the recoil and vibration of a gas spring-piston air rifle. It works, but it also leaves the shooter with a strange feeling of isolation from the action of the gun.

I shot off a sandbag rest at 25 yards for all of today’s work. Normally I tell you the one single way I shot the test, but today I had to change my shooting styles so many times that I will tell you about each of them as we go.

For no special reason, I started the test with JSB Exact RS pellets. They were hitting off to the right, so I had to adjust the scope to bring them back. When I did they also shot low, so a lot of elevation adjustment was needed.

I was shooting with the artillery hold with my off hand back by the triggerguard and the rifle was scattering shots, so I moved that hand forward as far as it would go — to almost the end of the forearm. I was then able to place 6 shots in an incredible 0.305-inch group in the center of the bullseye , but there were 4 other shots that landed a long way from that. The 10-shot group measures 2.398-inches between centers because of the 4 wild shots. 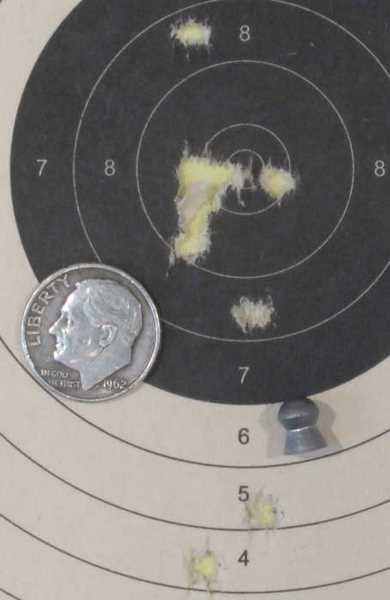 This group of ten JSB Exact RS pellets shows promise at 25 yards. Six shots are in 0.305-inches between centers, but all 10 landed in 2.398-inches.

I decided that RS pellets might not be the best, but I also reckoned that maybe I didn’t know the best way to hold the Throttle. So for the next pellet I started with the artillery hold I just described (off hand extended as far as possible) but I also shot that pellet by resting the rifle directly on the sandbag. Several readers had asked me to try that.

The pellet I tried all of this with was the RWS Superdome. As I said, this time I tried both the artillery hold and resting the rifle directly on the bag. Resting on the bag did not seem to work, although when I show you the best I was able to do using the artillery hold, you may wonder if I’m talking about that.

In general, with the artillery hold (off hand extended) I got two distinct groups. Funny thing is, these two groups did not happen in sequence. The pellets went to one place or the other on their own. Nothing I did that seemed to influence where they landed. 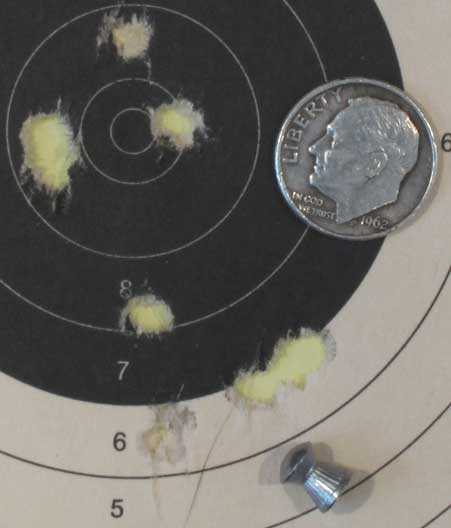 Ten RWS Superdomes made two groups. Five are in the center of the target (0.446-inches) and the other 5 are at the bottom of the bull (0.547-inches). The entire group measures 1.482-inches between centers.

Now it was time to try something else. Years ago, when I “discovered” the artillery hold with the Beeman C1 rifle, I was trying to see how bad that gun shot when held loosely. And of course it shot better. So now I grabbed the Throttle firmly like a deer rifle, since I had been holding it lightly. It wasn’t as bad as I thought it would be, but it still was not as good as the artillery hold. I did all of this with the RWS Superpoint pellet pellet.

The best group I got with RWS Superpoints was using the artillery hold with my off hand extended. Like the Superdomes I got another two separate groups — one higher and the other lower. Just like before the pellets went to these groups in random order. Nothing I did with the hold seemed to influence where they went. Ten pellets are in 1.831-inches. The top group of 5 measures 0.692-inches. The bottom group is 0.716-inches. 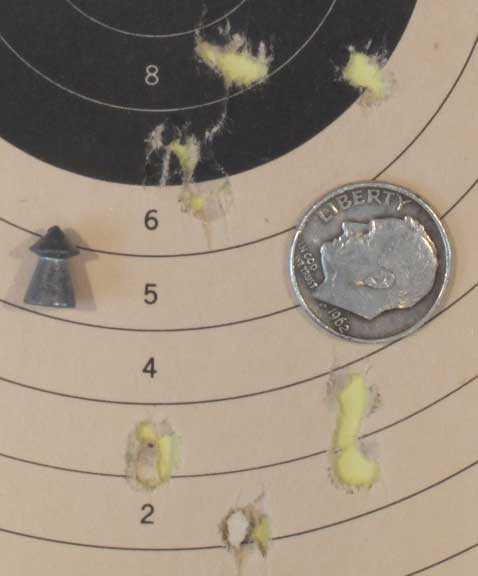 Time to break out of the box I’m in. I wanted to try the rifle with a pellet I hadn’t even thought to use. It would still be a premium pellet — just not one I would normally try in a rifle of this power. I selected H&N Baracuda Match pellets with a 5.53mm head. Please work! Please, please, please!

I think they did work. This time there weren’t two separate groups — just one elongated one. It measures 1.111-inches between centers for all 10 shots. Several pellets when though the same hole, unfortunately they did that in a couple different places. The one large hole at the top of the red center of the bull has 4 shots in it. 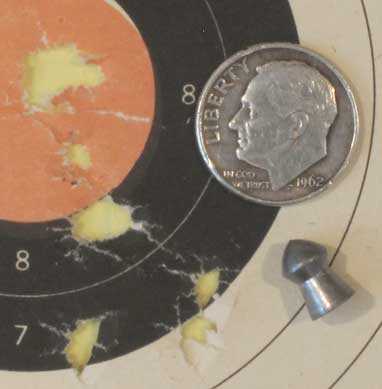 One of two things is happening. Either there is some subtle thing I have not yet discovered about shooting the Umarex Throttle, or the Throttle has a degree of variability that’s built into the design of the gun. It’s easy to say that it’s the latter, but that’s what I think it is.

Notice that the group stabilized a lot with a heavier pellet. If you own a Throttle, that would be the way to go, I think.

There is a lot to like about the Throttle. It generates good power in a light-cocking gas spring action and the trigger is very nice. It also comes with a nice usable scope. It’s quite a package for the price. If you get one, prepare to spend some time learning what it likes.