Today I shoot the Embark air rifle from 25 yardfs. This was supposed to be a test with a scope, but that didn’t happen and I will tell you why.

For several reasons the Embark is difficult to scope. First, it is a youth-sized rifle, so the pull of the stock is short. You therefore want to mount the scope far enough forward to get good eye relief, but once again, this is a youth rifle. The spring tube is also very short, and if the scope goes too far forward, the breech hits it when you break the barrel to cock the rifle. You need a short scope — a very short scope.

Next, the top of the receiver/spring tube is quite rounded, and, because the tube is so small (youth rifle again), the crown is high. Many 11mm scope mounts won’t work because the tube hits their underside, preventing their clamping jaws from reaching the dovetails.

There are solutions to all of this, but I spent over an hour just discovering all of it, which was too much time lost. So today I will shoot with open sights. Fret not, though. There will be a test with a scope, now that I know all that I have to do to get ready.

I shot the rifle from a sandbag rest at 25 yards with the same pellets that were used in the last accuracy test. The rifle was rested directly on the bag.

I shot at 10-meter pistol targets that have much larger bulls than the rifle targets.

I was reminded again of the pleasant characteristics of the Embark. It cocks so easily and the automatic safety is quick to disengage. The trigger pull is long, but light enough for good target works. GrandpaDan needs to get one for his family gatherings.

First up were the Journey target pellets that are required by the SAR rules. We found out last time that this pellet is remarkably accurate, despite fitting the breech rather loosely. I looked at the bull after the first shot, which hit the 8-ring. After that the next 9 shots were taken with no more looking.

In the end, 10 Journey pellets landed in 1.357-inches at 25 yards. The group is pretty well centered on the bull. I am pleased with it, though I believe that a scope could shave off another quarter inch or more. 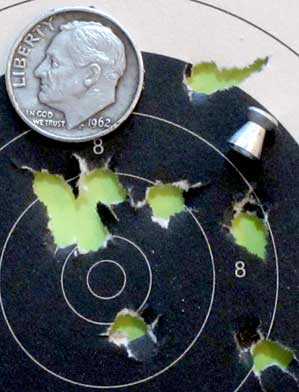 Ten Journey target pellets landed in 1.357-inches at 25 yards, when the Embark was shot with open sights.

Next I tried 10 Sig Match Ballistic Alloy pellets. These did not group quite as well at 10 meters in the last test. In this test, they opened up a lot! Ten pellets made a 3.048-inch  group at 25 yards. As you can see, 7 of the pellets are in a much tighter group, but I don’t think this was an aiming error. The groups shot before and after this one show I was seeing the target and sight picture reasonably well. This pellet also loaded a bit on the hard side. 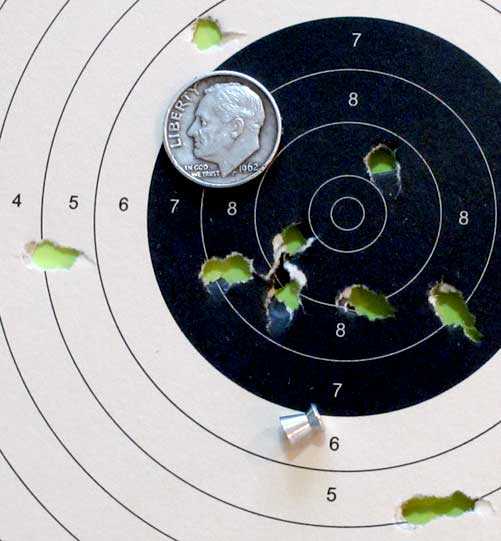 The most accurate pellets in the last test at 10 meters were the Falcon pellets from Air Arms. They did well at 25 yards, too. Ten went into 1.723-inches which doesn’t sound too good until you look at the group. I see evidence of vertical aiming error in the group, and predict that a scope will reduce the group size by a lot. 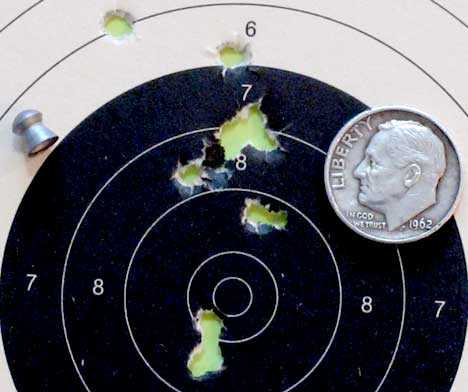 Ten Air Arms Falcon pellets made this 1.723-inch group at 25 yards. It’s so vertical that I think there is an aiming error in it.

Falcons were also the Cinderella pellets of the test. They fit the breech just right.

This test turned out pretty much as I expected, though I did think I could shoot groups that were somewhat smaller. But now I have this as a baseline for comparison of the scoped effort.

There is no doubt that the Embark is an accurate spring piston air rifle. At the price it seems like the best deal in town.