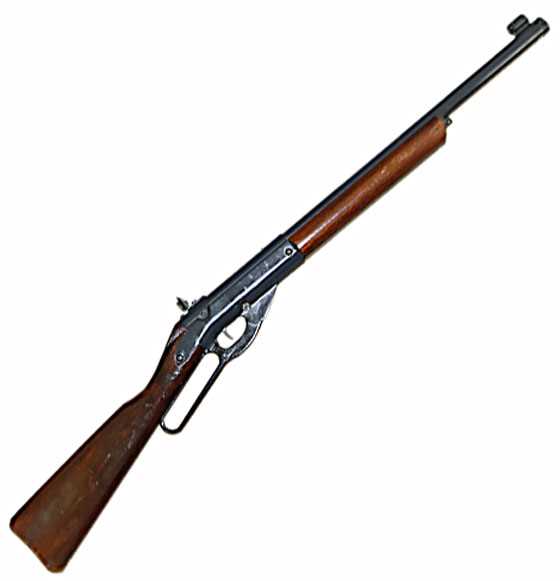 Welcome to July! Today I thought I would start looking at the Daisy Model 99 Target Special that I acquired at the recent Texas airgun show. I know reader RidgeRunner is anticipating this report and perhaps others are, as well.

For the readers who are awaiting the next Diana model 23 rifle report, know that I am working on it in the background and hope to have something for you very soon.

And I learned something very important this weekend. Daisy also sold lead shot for the Targeteer. It was obviously number 6 birdshot, and it makes perfect sense, because it would have been far cheaper than heading steel wire to make steel shot. Just buy the shot and repackage it. We know it works, and it probably works better than the steel shot. The tubes of shot I bought from Ebay were all lead shot. I felt cheated until I did the research and discovered lead was also correct. The learning never ends. Now let’s look at the Daisy 99 Target Special.

Not what I expected

I was surprised by this seemingly average BB gun because I used to own one and wasn’t that impressed. But I didn’t own this one, and therein lies a tale.

The model 99 came out in 1959. It was created by Daisy to promote youth marksmanship training, and had features designed with that in mind. For example, it came with an adjustable rear peep sight.

Peeps were not new for Daisy, the Number 25 slide action gun had them for years, but they were rudimentary compared to this one. Oh, it’s not much to look at, but this peep really works. Both windage and elevation adjustments are made by loosening a screw and sliding the peep in the direction you want the shots to go. The peep disk itself is knurled and serves as the elevation adjustment screw. 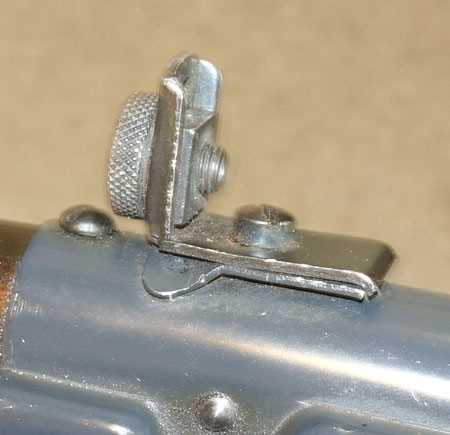 The peep sight is fully adjustable.

Up front is a globe or hooded front sight that accepts inserts. The rifle came with 4 inserts that can quickly be changed by pressing in on the spring-loaded insert carrier. 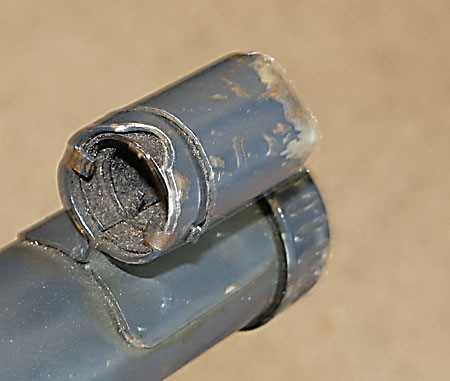 The front sight accepts different inserts. Press in on the spring-loaded cutout at the top to release the insert.

The 99 also came with a sling, though on the earliest model I don’t think the rear anchor was installed by the factory. These slings are made from thin olive drab web fabric and may not really serve the purpose they were intended for — at least not in my opinion. They were for kids to wrap around their off arm as a hasty sling, the way the military used to each marksmanship. But the guns were so lightweight and the rear sling anchor is just an eye screw in the stock that I don’t think they can withstand the strain of a true hasty sling use. I have used a hasty sling for marksmanship and know the strain it puts on the rifle.

The Model 99 has a Daisy wide body action that differs from the action found on Red Ryder-type BB guns. I believe the wide body action was first offered on the Number 140 Defender Daisy that was made only in 1942. After the war the wide body proliferated on a number of other models, but the slimmer Red Ryder action hung on, too, and both are still in production today.

Both the stock and forearm are made of wood and stained dark brown. Because of the wide action, the stock is thick and robust.

In the first year of production only, the 99’s magazine was a gravity feed type that nominally holds 1,000 BBs. When the gun is cocked, the BBs run down to a funnel at the base of the shot tube, where they are organized in a line to enter the breech. 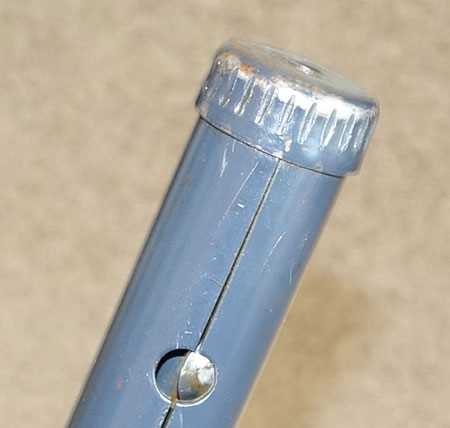 Twist the knurled muzzle to open the magazine for loading.

This style action is very reliable in operation, but was the basis used by the Consumer Product Safety Commission to sue Daisy in a wrongful injury case — on the basis of the potential for unreliability (i.e. a BB could get hung up and the gun could be potentially loaded without the shooter knowing). Of course the gun-handling safety rules of assuming that every gun is loaded and never pointing the muzzle at anything you don’t want to shoot would cancel this, but that’s something a gun-hater never stops to consider.

When their attorney approached me for my technical opinion on the reliability of gravity feed (I sensed he wanted to use me as an expert witness), I showed him several instances like the Gatling gun, where military firearms have used gravity feed successfully. Within a short time after that the CPSC settled with Daisy out of court.

Daisy switched to their 50-shot forced feed magazine in 1960 and retained it for the Model 99 through the end of production in 1979. The first Model 99 I owned years ago had the forced feed mag and I thought from that association that I knew this model. I did not care for that BB gun. I found it to be mediocre in all ways, but it wasn’t until researching this article that I discovered how different it was from the gun I’m now testing.

Three variations of the Model 99

There are three variations of the Daisy Model 99. The one I am now examining is the first variant and it is characterized by having gravity feed. Variant two is the one with forced feed. Variant three was made in 1967 only, and was called the Model 99B Champion.

The Model 99 was created by Daisy as a youth marksmanship air rifle. They also created a marksmanship program for it that is still being held, as far as I know. The Daisy BB gun championships have been held since 1966. At one period they were called international championships, but today the title is national.

Because of its marksmanship features, most particularly the sights, the 99 was well-suited to competition, but the moment there was a championship, clever coaches started looking for an edge for their teams. Since the trigger was already good they concentrated on accuracy. By swapping shot tubes until they found one that was accurate, coaches gave their team members a decided advantage. Daisy officials have told me that it wasn’t uncommon for a coach to order 20 shots tubes, only to return 18 of them for credit. He was testing each tube to see if it was good. That eventually got recognized by Daisy, but it took 20 years.

In 1975 Daisy brought out their 299 Target Special that was a thousand-shot air rifle with gravity feed. Isnt’t it interesting that they went back to gravity feed on the 299 that was supposed to be a better target gun, but left the 99 with a forced-feed magazine? They must have seen that the forced-feed shot tube wasn’t the answer, because coaches were swapping them. Well, the gravity-feed magazine wasn’t the answer, either.

The 299 lasted just two years, but it spawned two other Daisys — the 2299 Quick Kill BB gun and the Lucky McDaniels Instinct Shooter! The model 99 continued until 1979, but when the 299 went away in 1976 it was replaced by another gun we know all too well — the single-shot 499 that we know as the world’s most accurate BB gun.

The air rifle I am testing for you is 36-1/2-inches long and weighs exactly 3 pounds. The metal is finished with a tough electrostatic paint that on the test rifle remains on over 98 percent of the area.

The cocking lever is aluminum and the cocking effort is light, for those who may remember their older Daisy lever actions that didn’t cock so easily. And speaking of the coking lever, I found something extremely interesting on this air rifle — a second place to oil. Everyone should know the importance of oil to a BB gun. When they get dry they lose all power and the BB barely comes out. Oil the plunger (what a spring-gunner would call the piston) and the power is restored. It’s so important that it’s stamped on the gun next to the oil hole. But I found a second place to oil. It looks like they want you to oil the rear of the plunger assembly, because that is what is inside the gun at the spot indicated. 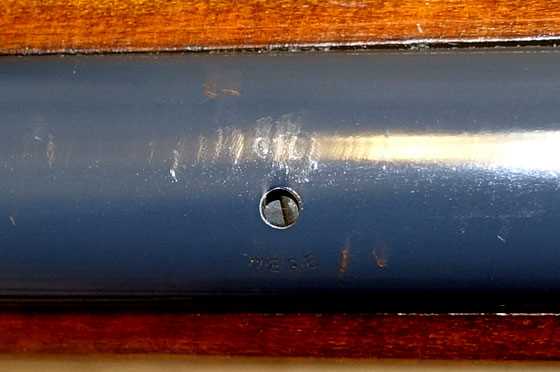 The traditional oil hole is on top of the spring tube. This is for the plunger seal (piston seal). 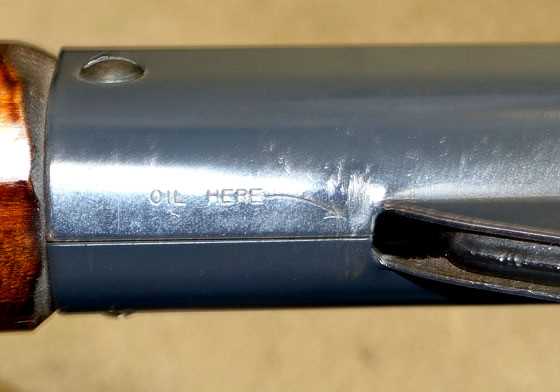 A second place to oil the air rifle.

I don’t normally make comparisons between airguns, but I’m making an exception with this one. This was the forerunner of the 499 that I have tested for you many times and as such it bears a word. Why go to the 499 if the 99 worked? Well — it didn’t work — at least not to the extent Daisy wanted it to.

The trigger on the test rifle is one of the nicest Bb gun triggers I have ever tested. It’s certainly nicer than my 499 trigger. The aluminum blade is straight and the single-stage pull is light and smooth. The 499 feels heavy and gritty in comparison. Oh, coaches around the nation have learned how to make the 499 trigger better, and given the liability issues of the day I suppose it is as good a trigger as we can expect, but I must say that the 99 trigger on my new test rifle is a thing of beauty. 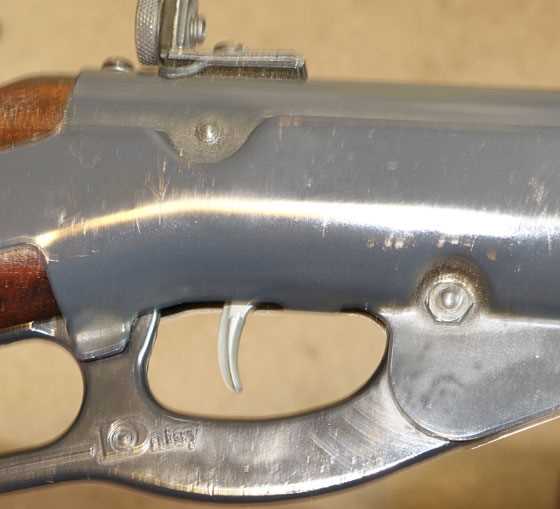 The trigger blade is straight, which you want on a target rifle.

I bought this BB gun because the price was right and it is a scarce first variation of an iconic air rifle line. I never anticipated like it as much as I do now. All I can say is I sure hope this one turns out to be accurate! 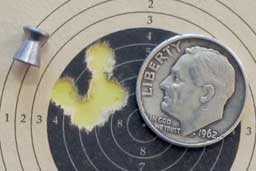