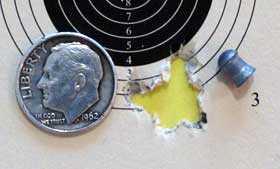 We start accuracy testing the Benjamin Fortitude today. Sometimes I begin this test at 10 meters and other times at 25 yards. I’m starting at 10 meters today because the Fortitude is a significant precharged air rifle that I want to test very thoroughly.

I mounted a vintage UTG 8-32X56 SWAT scope on the rifle. The scope was so old it only parallax adjusted down to 25 yards, so I ran it at 8 power for this test. The bull was a little blurry but easy enough to see. When I get back to 25 yards the image should be crystal clear.

You could say this 10 meter test is more of a thorough sight-in than an accuracy test, and that wouldn’t be inaccurate. I consider it both that and a familiarization with the rifle. Since this Fortitude test has been a patchwork quilt of starts and stops, I thought I needed to get to know this rifle a little better.

I chose three pellets from the last velocity test. If they pan out at 10 meters I’ll try them at 25 yards. If not I will try others. When I do a 10-meter test it gives me some insight into what the airgun likes in general, and that serves the later tests well.

This method of selecting pellets works well for me because I try to always shoot premium pellets in these tests. I might switch in one bargain brand pellet, just for fun, but mostly they will be pellets we all know and trust.

I shot off a bench with the rifle rested on a sandbag. It was dead still, so the test is about the rifle and not about how well I can shoot.

Most buyers are getting the .22 Fortitude. I looked and didn’t find a .177 report, so I had to make this one up as I went.

The first pellet I tested was the 10.34-grain JSB Exact Heavy dome. It was the pellet I also sighted in with. I set it to hit at the bottom of the bull to keep the aim point clear and visible — important since the image was a little fuzzy. Ten pellets went into a nice round group that measures 0.379-inches between centers. I thought that was good for a start.

There have been two complaints about the Fortitude from owners. They say it cocks too hard and the trigger is too heavy. I agree that the cocking is a bit hard, but it’s in line with what I see on PCPs in this price range. If you keep the butt against your shoulder as you pull back the bolt, it’s manageable.

The trigger is not too hard. The one I’m testing breaks at 5 lbs. 12 oz. and is very crisp. That’s in the same neighborhood as an M16/M4 firearm trigger. Maybe because the Fortitude is so lightweight shooters are noticing the trigger weight more.

My female cat, Dale Evans, who always complains when I shoot indoors, had nothing to say when I tested the Fortitude. That is the feline stamp of approval. Backyard friendly for sure.

I tested the Falcon pellet next. This group was almost a screamer, I thought, until I saw the target close up. Nine of the 10 shots are in 0.343-inches at 10 meters, but the last shot opens the group to 0.599-inches. I can’t tell whether that wide shot was me or not. I didn’t call it. So, I think I will test Falcons again at 25 yards, just to find out. 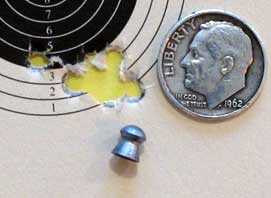 I will say that the Falcons loaded tight in the magazine, with their skirts keeping them from falling into the holes all the way. That didn’t affect loading or the reliability of the magazine feeding but I could feel greater resistance when I pushed the bolt home.

The final pellets I tested were Crosman Premier 7.9-grain domes. They loaded easily into the magazine and also into the breech. The group they gave was a bit horizontal, even without the one pellet that wasn’t in the main group. Ten of them are in 0.735-inches between centers at 10 meters. 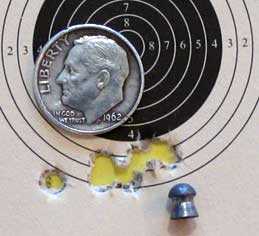 The Fortitude has a regulator. That gives you a few more shots per fill. I have found that the reg fills with air slowly, so at greater distances I’m going to wait longer between shots. Maybe I will test it both ways, so we will know for sure.

The Fortitude can shoot with the right pellet. Like I said before, it’s more of a repeating Maximus than a cheaper Marauder. It does have that regulator which should help accuracy at longer distances, but that’s something we’ll need to test.