No, this isn’t a “how to” piece about making a chronograph from a can. It’s a story about the past. For some of you it’s a story about “the old days” when we were kids and life was still fun. For others it goes back before you were born. But for all of you it should be interesting. So grab your coffee and let’s reminisce!

How powerful is it?

When I was a kid in the 1950s we all coveted the BB gun. As with all things in life, there were the “haves” and the “have-nots.” I was a have not, but I lived next door to a kid who was a have. Duane had a Daisy BB gun. It was some sort of El Cheapo model that didn’t come with a forearm, and it also shot to the left, but he knew exactly how much to hold off and was pretty good with it. The ownership of that small gun made him the Alpha in the neighborhood.

From time to time we all wondered how powerful these guns were and Duane showed us how to tell. He took a tin can and shot it from about 5 feet away, then we all examined the dent left by the BB. If it was deep, that was good. If there was a small crack in the bottom of the dent, that was better. If the crack was almost as long as the dent that was excellent and if the BB went through the front of the can, that was the best.

The box lid of the Benjamin 30-30 touted the power of the gun. 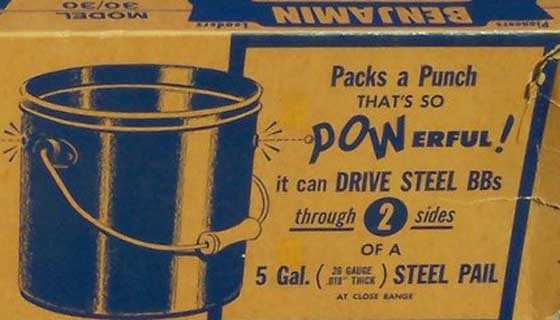 That’s “in your face” advertising for the boy who knows what real power is.

Forget the safety issues of shooting steel BBs at steel cans — we sure did! Forget the moms who were sure we were going to shoot our eyes out. Fathers understood. This is what kids wanted and Benjamin was giving it to them.

Tin cans are not tin!

Tin cans have next to no tin in them. Maybe up to WW II some of them were made from steel that was plated with tin, but synthetic coatings replaced tin. Cans are now made of thin steel plate that is soldered together at the both seam and the ends with lead solder. There is a little tin in the solder to make it flow better, but that’s all. I worked at National Can Corporation for three years while attending college in the 1960s and made millions (not an exaggeration) of steel cans on a bodymaker. I cut the thin steel plate to size for the bodymaker to fold it around a mandrel, while I kept the solder pots filled and fluxed. Making gallon paint cans was the hardest because the steel was large. An inch of it (maybe 100 cans) weighed 35-40 pounds and you had to load 8-10 inches into the hopper, to make time to go down and fill/flux the lead pots that were 40 feet away. The bodymaker also soldered two ears on for the can’s handle, so the lead was constantly needing to be topped off.

If the cans were destined to hold acid-based foods like tomatoes, we also sprayed their insides with a varnish that kept the food from touching the metal inside the can. The solder joint was covered in this operation, too. That’s why deeply dented cans and cans with lids that are puffed out from internal gasses are to be avoided.

Steel-bodied cans are tough and do give a point of reference for the power of a BB gun. The best way to use them is to compare one gun against another. You will never know the velocity of either gun but the dents will tell you which one is more powerful. 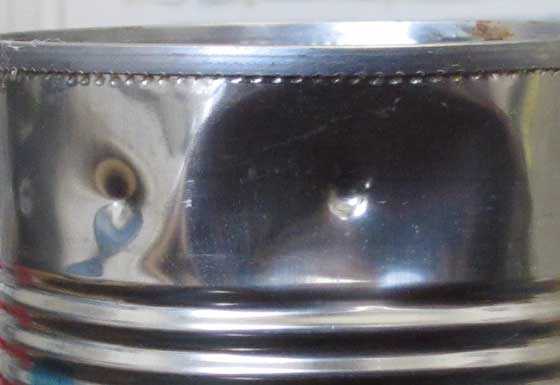 Never shoot a steel BB at a steel can without eye protection! BBs bounce back and steel cans are like a BB trampoline!

We didn’t have aluminum cans in the ’50s. When I started working with aluminum cans in the late ’60s, I learned that aluminum was very expensive and had to be made as thin as possible to be cost effective. We experimented making them explosively, using a drop of water and a powerful electric spark to explode the metal into a steel die, but I don’t think that process went anywhere. As far as I know the cans were drawn over a series of progressive dies until they were perfectly formed. The point is, aluminum cans are way too thin and delicate to be used in the same way that we used steel cans. They are fun to shoot and they are far safer (still wear safety glasses) because they don’t bounce many BBs back at the shooter, but the era of the tin can chronograph has ended.

I say Hickory tree but a tree with a smooth thin bark like Birch is better. The question is, will the gun stick a BB in the tree’s bark? Again you can’t tell the velocity but tree bark is great for comparisons.

For this one you stand at the back door and shoot at a tree. It doesn’t have to be hickory, but most of mine were. This is another comparison chronograph. From the sound of the shot to the sound of the hit returning you can tell which of two guns is faster.

You shoot up into the leaves in the branches overhead and if both guns shoot in the same direction, the sound of the BBs ripping though the leaves tells you which one shoots faster. Give some thought to where the BBs will come down, because if you don’t and a neighbor lady gets hit, you loose BB-gun privileges for a long time.

It’s summer and you are home alone. You want to shoot your .22 Remington. So you call Duane and tell him to put a tin can in front of the big tree at the corner of your property. It’s on your property but it’s a whole lot closer to his house than to yours. Tell him to position it so you can shoot it from your back door. You live in town and the police station is one block from your house, so you have to be very quiet. You open the back door but remain inside the house about 8 feet, using your house to soak up a lot of the sound of the rifle’s crack.

You tell Duane not to put a paint can out because it will splatter paint everywhere. You are shooting a long rifle round that will easily pass through the can. When you shoot the base of the tree is enveloped in a yellow cloud and the 3-foot wide trunk gets painted with several yellow stripes. Duane put a spray can of yellow paint (of course he did!) that was three-quarters full in front of the tree. Now you have to come up with a reason why that tree has a yellow trunk.

If you own a BB gun you need BBs. They sell nickel packages of BBs down at Eddie’s, which is only two blocks from your house. They also sell large tubes of BBs for a dime, but that’s an entire dime. Need I say more? 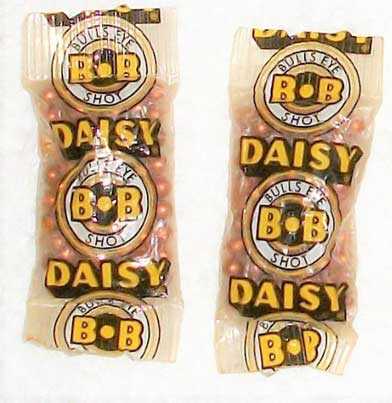 When I finally got a BB gun in the ’60s, Daisy BBs sold for a nickel a pack.

Eddie’s gives refunds on pop bottles. BUT, you have to actually spend the money you get from the bottles on the BBs, which is very difficult to do because Eddie’s also sells small fruit pies that are very good.

So, you are out of BBs. Can anything else work? YES! Kitchen matches will fit in a BB gun. Break off the head with about a quarter to a half-inch of the wooden stick remaining and stuff it into the muzzle of your gun. The head won’t go down the bore. When the gun shoots the match head goes out with some force for about 20 feet. If you shoot it against the concrete foundation of your house (where else would you shoot it?) the match heads ignite with a small pop when they hit the concrete. Get a couple guns going and it sounds like WWII.

We were soldiers once, and young

My late friend Mac once told me that he shot matches at his cousin Billy. They were playing war and cousin Billy was wearing a WWI doughboy helmet. Mac shot and hit the underside of the helmet brim. The match skated up into the top of the helmet where it set Billy’s hair on fire. He had the strap fastened tight so it wouldn’t move when he ran and now he couldn’t get it off. 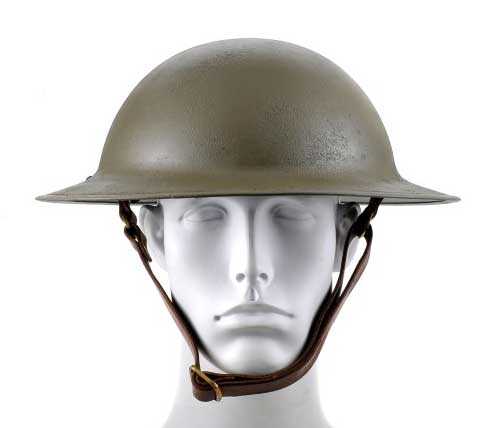 The US M17 Brodie helmet was not good if a lit match got under the brim. Especially if the strap was fastened and you couldn’t get it off!

You are out of matches. Duane shows you how to load your gun with mud by stuffing the muzzle into the bottom of a puddle. You do. Then he tells you if you wait until the mud dries it will make a puff of smoke when the dry mud plug hits something hard. It does. For the next two weeks you are Steven Spielberg, making war movies with your smokin’ BB gun. Then your gun starts making funny sounds when it is cocked. It used to be quiet but now it sounds scratchy when you pull the lever down. It also doesn’t shoot BBs very hard anymore. Fifty years later, when some guy checks out the gun you used to own at an airgun show he hears the scratchy sound and tells his friend, “This guy shot mud plugs out of his gun. It’s trashed!”

And so it went when we were kids. We had a lot of fun and it’s amazing that some of us made it this far.

55 thoughts on “Tin can chronograph”