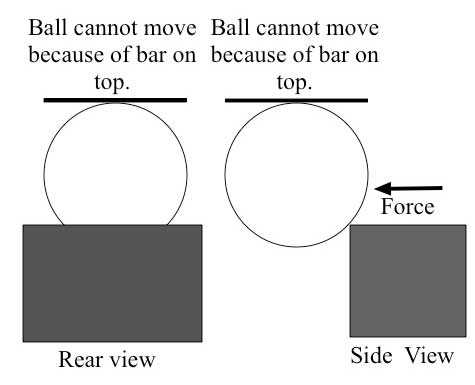 How can a ball be a sear?

A ball can restrain something from moving by blocking it. When the ball moves out of the way, the item that was restrained is free to move. Let me show you.

In this view, the ball blocks the large bar (which represents the piston) that is being pushed by the force from a spring. As long as the ball doesn’t move, the shaded bar/piston cannot advance. The ball cannot move because there is another bar restraining it on top. 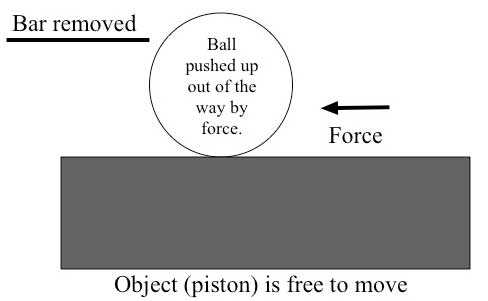 When the bar above the ball is removed, the larger bar that we know is a piston pushes the ball up out of the way by the force of the spring that’s pushing it.

Three balls instead of just one

The Diana trigger uses three balls in the same way you have just seen. The piston is under pressure to move forward and the outer (silver) “cage” pushes the balls down into the groove at the rear of the piston rod. 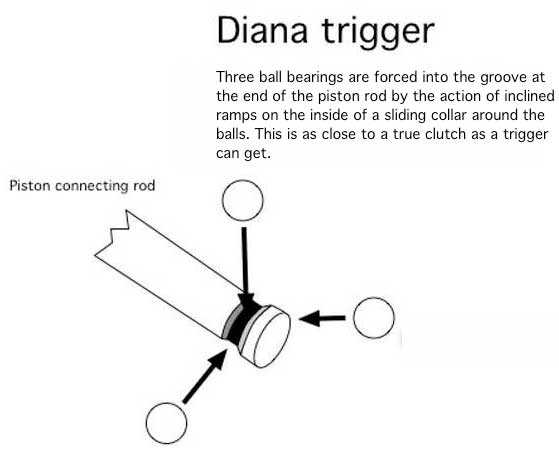 This is how the three balls in the Diana trigger act as a sear. 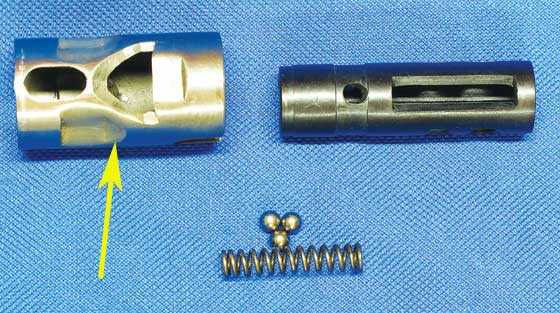 The silver “cage” has three ramps stamped into it. The arrow points to one. These ramps push the balls down through the black inner “cage” and into the groove at the rear of the piston rod.

How the trigger works

Let’s take a closer look at the inner cage. The holes that the balls fit into are not cut perpendicular to the axis of the cage. If you look closely you will see they are cut on an angle. That makes them easier to push out of the way. 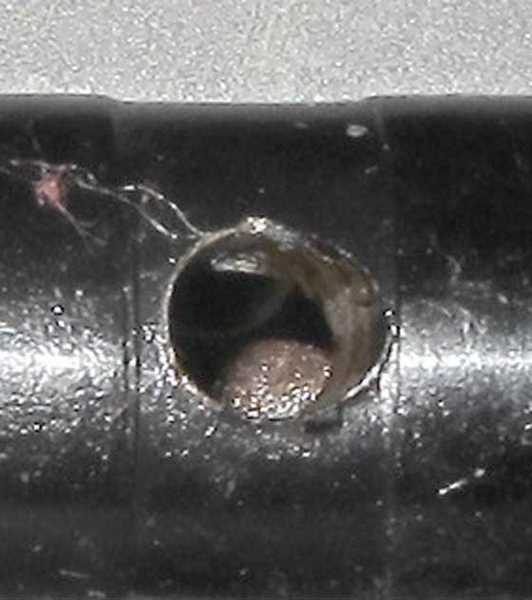 This closeup shows the ball bearing hole in the inner cage. As you see, it’s drilled on an angle to make pushing the ball out of the way easier.

When the Diana 27 is cocked, the piston moves to the rear and the piston rod pushes into the inner cage, pushing the three balls up and out of the way. The rear of the piston rod is shaped to do this. Then the balls are pushed back down on the piston rod by three ramps inside the outer cage. 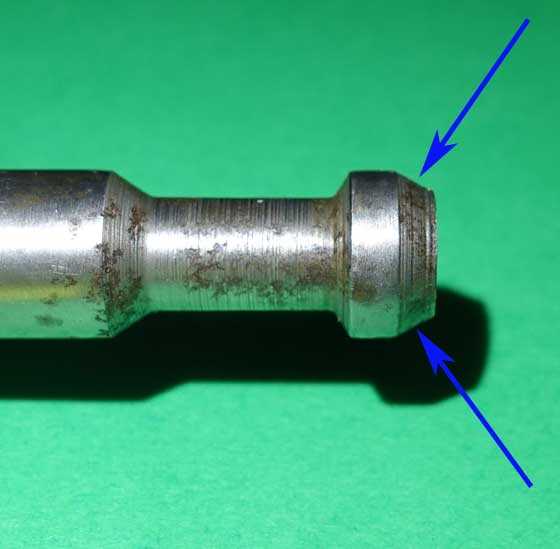 The end of the piston rod (arrows) is shaped to push the balls out of the way as the rifle is cocked.

Before you get a headache, let me show you that this function is familiar to you. Where have we seen this before? 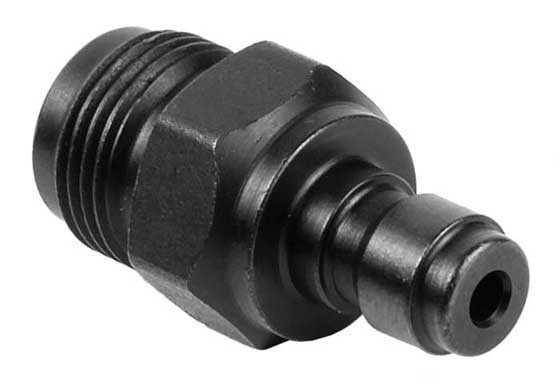 That’s right. A male Foster fitting looks like the end of the Diana 27 piston rod. And it does the same thing — pushes the balls out of the way, then they come back and grab it on the other side. 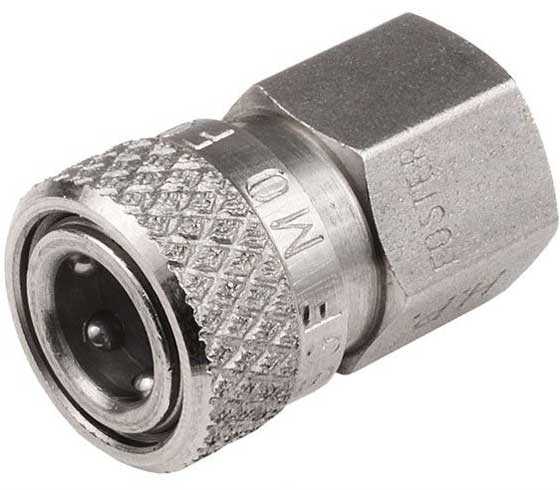 The Foster fitting works in the same way as the Diana ball bearing trigger. Balls in the female coupling hold the male fitting captive until released by an outside action.

I could probably stop right here, because the Foster fitting analogy explains the Diana trigger so well. But let me show you a few more key pictures to cement the idea. 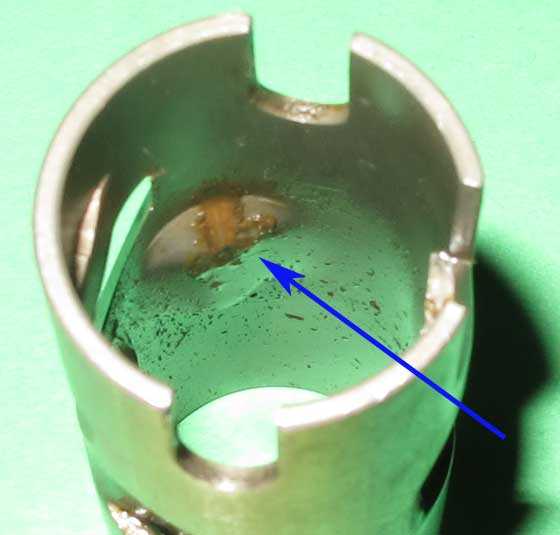 This is an inside view of the ramp (arrow) that’s pressed into the outer cage. This ramp pushes the ball into the piston rod end. When this cage moves just a little, these three ramps move, allowing the piston that’s under spring tension to push the three ball bearings out of the way. The rusty bearing has left a mark where it worked for 48 years. 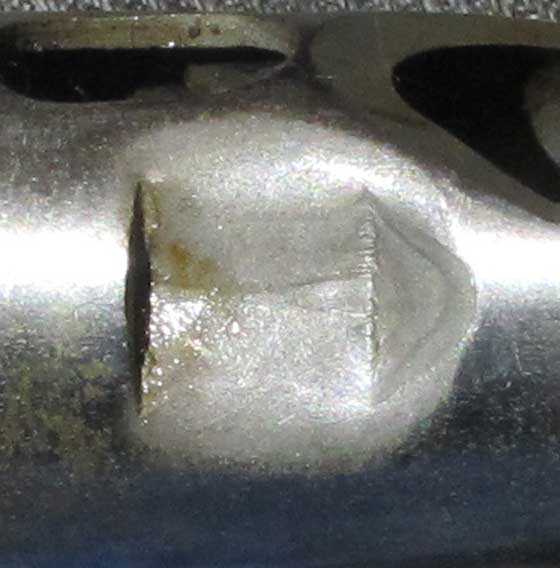 Here is a better look at the outside of one of the three ramps that are pressed into the silver outer cage.

So the principal part of this “trigger” is actually a ball catch that is similar to those found in many quick-disconnect hydraulic and pneumatic couplings. When the trigger is properly adjusted, the inner and outer cages remain where they are positioned during cocking, with the three balls just barely blocking the piston rod end until the slightest pressure on the trigger releases the outer silver cage. A small but powerful coiled steel spring then pushes the silver cage slightly forward, moving out of the way the three ramps that are retarding the three bearings. Once the bearings are free to move, the piston rod end pushes them out of the way and the piston slams forward to fire the gun. 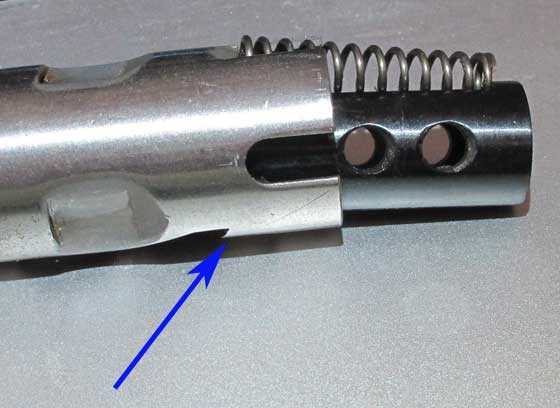 Here is the thousand-word picture. First, note the coiled spring that pushes the silver cage away from the black inner cage. See the two holes in the black cage? They are for the two crosspins that hold the Diana powerplant together inside the spring tube. The black inner cage never moves. Notice that the silver outer cage only has a U-shaped slot. It is free to move back and forth over those two crosspins. See where the arrow points? That is the sear contact point with the trigger. Of course all of these parts would be in alignment if they were inside the spring tube with the piston rod in their center. 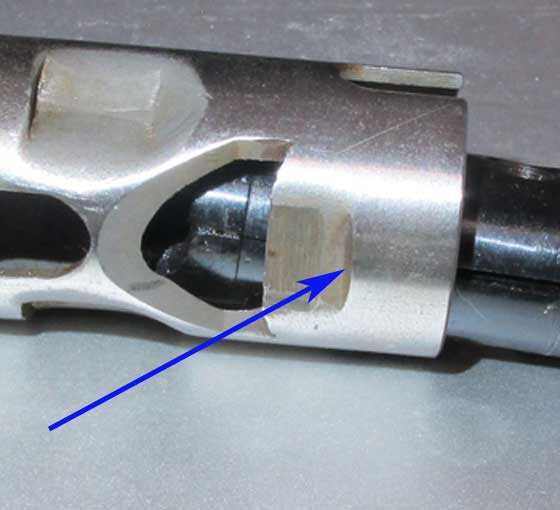 And there (arrow) is where the trigger contacts the outer cage. When the trigger blade releases the cage, that coiled spring on the other side pushes the cage forward. Remember, the black inner cage is pinned in place and cannot move. When the outer cage moves forward the ramps release their pressure on the balls, allowing the piston to push them out of the way.

This report is the most detailed explanation I have ever seen of how the Diana ball bearing trigger works. I hope you understand that the parts in this mechanism work in unison and the trigger doesn’t actually come in direct contact with the piston. If I could make an analogy, this trigger operates similar to the way a multi-lever set trigger works, though it uses different parts to do so. When you adjust the trigger you are adjusting the amount of contact the trigger blade has with the sear point on the outer bearing cage.

When these parts are inside the rifle, the spring tube and piston rod keep them aligned. Outside the gun they are just a mess of parts. Inside they work together as a unified mechanism.

Assembly of this trigger, which goes together as the rest of the powerplant is being assembled into the spring tube, seems daunting to the beginner, but it’s not that hard. Use a tacky grease like Tune in a Tube (TIAT) grease to hold the balls inside the inner cage as you install the parts.

I’m cleaning the parts and working on replacing the piston seal right now. The screw that holds the seal assembly to the piston is fighting me because it has rusted tight. I’m using every trick in the book to free it. Heat will probably be my last resort, which means I may have to buy a few more parts before I can install the new seal.