Read this paragraph, because I don’t want to have this discussion a hundred more times. The Air Venturi Seneca Aspen PCP with a built-in pump is a complex airgun. The complexity isn’t in the design or in the build — it’s in how the rifle operates. So I have provided the links to the first 5 reports on the .22-caliber rifle I already tested last year, for those who want to go back and see how I tested it. After today’s report I will only link to the test of this rifle.

The Aspen is a PCP that also has a built-in pump, so it can also operate like a multi-pump pneumatic. In my opinion, at least to this point in the testing, it makes more sense to operate the gun as a multi-pump, because you can then regulate the pressure in the reservoir. That gives you precise control over the velocity, where just filling it like a PCP will only give a handful of shots. All this is speculation, because I have not yet done the testing, but after seeing the pressure curves in Parts 2 and 3 of the test of the other rifle (in the links provided above) I am almost certain that I’m right.

In talking to Tyler Patner at SHOT, I learned that the .25 Aspen performs differently than the .22, in that it comes on its power curve when closer to 3,000 psi is in the reservoir. We learned while testing the .22 that it likes 2,200 psi on low power and 2,000 psi for high power. And I told you that because this gun has a built-in pump, you become the regulator. If you keep it at the optimum pressure the accuracy will be superb — at least out to 25 yards.

That means I really need to go through all the Part 2 pressure over velocity testing again. If I didn’t own a chronograph I would only be able to read a test like this one that somebody else did and watch my onboard pressure gauge as I shot.

The real reason to buy an Aspen!

But yesterday, a reader named Mike Ogden gave me some surprising wisdom. This is a quote from his longer comment.

“I am going for the Aspen and i am not so much a nube that i don’t clearly see a scuba tank and a compressor and an FX impact or some such.”

Do you remember in Superman when Lex Luthor said that some people could read the ingredients on a chewing gum wrapper and unlock the secrets of the universe? I think Mike just did! What I got from his comment was a fellow can buy an Aspen and have a working precharged pneumatic airgun that he can shoot immediately without buying all the support stuff like tanks and compressors. In other words, the Aspen may be an ideal way to get into PCPs.

The Aspen I will be testing for you here is brand new. The .22 I tested was one that was being passed around the shop at Pyramyd Air for their testing. So I am going to see some things with this one that I haven’t seen with the other one. The first thing is the scope that comes bundled with the gun. It’s a 4X32 scope with AO. I mounted a UTG Bug Buster 3-12X32 scope on the .22. I can now comment on the scope that comes with the rifle a little better because I  have one to examine.

The second thing about a new gun is it comes with a manual. For the other rifle I always had to look online at the Pyramyd Air library of manuals. All the information is there, but I find that a paper manual I can hold is more conducive to how I like to operate. I only consult the online manual to find the answer to a specific question, where I can read the entire paper manual at my own pace.

In reading the manual I have learned how and where to lubricate the Aspen, plus how to adjust the trigger. I had looked online for the trigger adjustment on the first Aspen, but it’s always easier (for me) to have the manual laying open when I do the job.

Physical differences between the rifles

Things that come with the rifle

Besides the rifle, manual and scope you get a fill probe, whose tail end (that sticks out of the gun) is a male Foster fitting. So, filling from an conventional air tank is straightforward.

They also included a small bottle of silicone oil for lubrication. I lubed the test rifle right off because it was bone dry as it came from the box.

One 8-round circular magazine was included, and the rifle had an aluminum single shot tray installed when it came out of the box. Both the .177 and .22 versions have 10-round magazines. And I never had the single shot tray to test.

The final item in the box is an Allen wrench to adjust both the trigger and the striker spring tension. The manual tells you that after about 3,000 shots it may be necessary to adjust the striker spring to maintain power. I know there will be some people who will want to crank the rifle up as far as it will go right away, but that’s not my plan. I am looking for the best accuracy with decent power.

The first rifle I tested didn’t seem to have a trigger return spring (or it was very weak) but this one does, so I may adjust the trigger. As it came from the box it is definitely two-stage.

I put this at the end of the report because we have already gone through it with the .22. The .25-caliber Aspen is a PCP repeater with a built-in pump. It features a hollow synthetic Monte Carlo stock and a synthetic pump handle. The rifle weighs 8 lbs., even. It is 43.3-inches long and has a 21.5-inch barrel.

The pull is 14.25-inches. The black rubber buttpad is soft and grippy. The stock also comes with sling swivel studs.

The rifle is a bolt action and the bolt is operated by a sidelever. I found that very easy and convenient when I tested the .22.

The shroud is not baffled. The barrel seems to pass through a bushing, so it is not free-floating. The rifle has a two-stage adjustable trigger. There are no sights, so some kind of optics are required, and a scope and mounts come bundled with the rifle.

The Seneca .25 is already of interest to several readers. I plan to test it just as thoroughly as I tested the .22, whose tests are not yet completed. But I think if this proves to be as accurate as the .22 the only choice you have to make is the caliber. I say that because the Seneca stacks up to be a best buy. And it may also be a perfect entry into the world of PCPs. 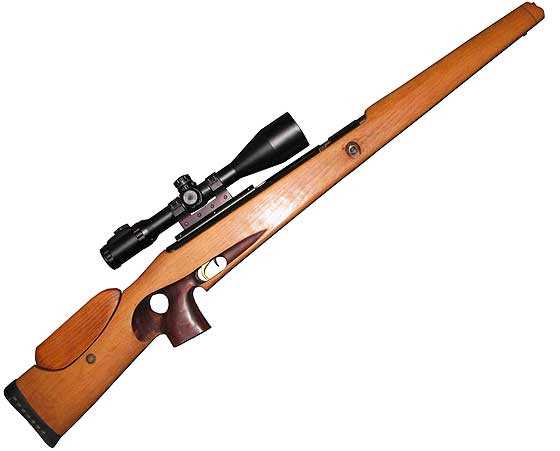