This stuff came out of the Daisy Number 12 model 29. It’s leather that has rotted and come apart.

When I saw that junk I knew what had happened. The leather piston seal, which in a Daisy BB gun is called a plunger seal, had rotted and was coming apart. It had to be fixed, before the gun could work again.

I frankly did not know how a Daisy Number 12 model 29 came apart — except for one detail. Most Daisys have a spring anchor that holds the rear of the plunger assembly (in a BB gun the piston, spring guide and mainspring are assembled together and are called the plunger assembly) inside the rolled sheet steel body of the gun. For the guns that are like vintage Red Ryders, something has to press the mainspring forward to take pressure off the plunger anchor. I could see that this gun had a spring anchor that also served as the rear sight, so I assumed it was made that way. 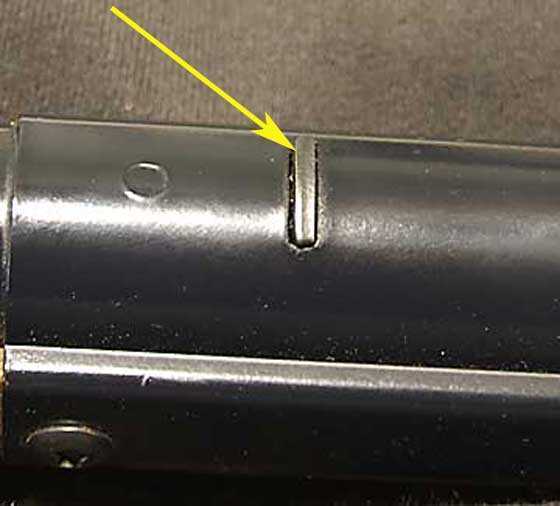 Most folded metal BB guns have a spring anchor that looks like this (arrow). 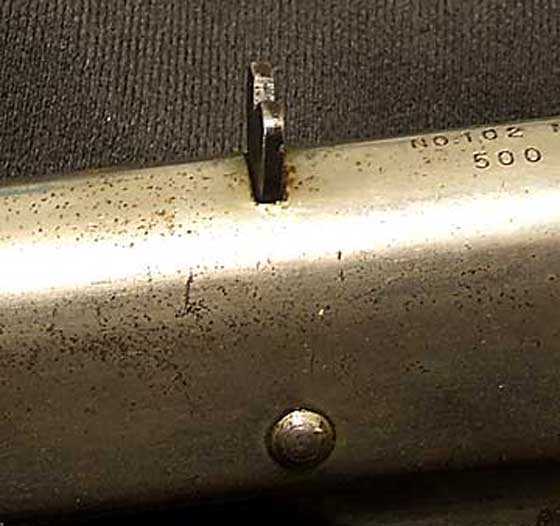 On some older guns like this one, the anchor also serves as the rear sight.

Many years ago the late Jerry Voich wrote a guest article for The Airgun Letter about disassembling folded metal BB guns. In his article he gave the plans for a spring compressor that allowed the worker to take tension off the spring anchor to remove it from the gun. 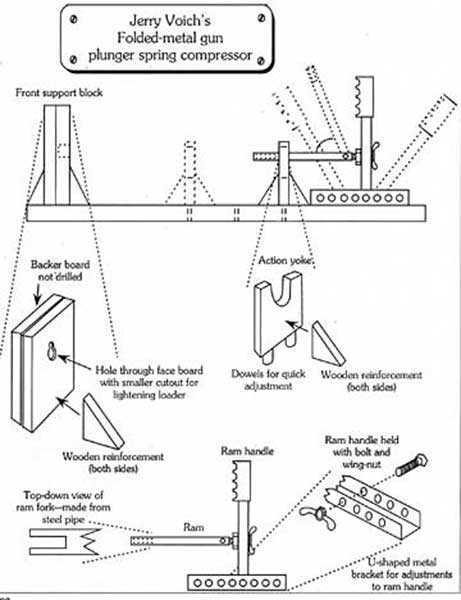 I could never build a contraption like that, but my neighbor, Denny, volunteered to. He built it to a point and then we tried to use it, but we had no success. Apparently the Number 12 gun doesn’t work that way.

Denny got to this point with the spring compressor before we discovered that the Number 12 doesn’t disassemble in the normal way. It will still work for most BB guns.

As we were fiddling around and trying to understand the mechanism, we pulled the spring anchor out without a compressor. It wasn’t that hard. 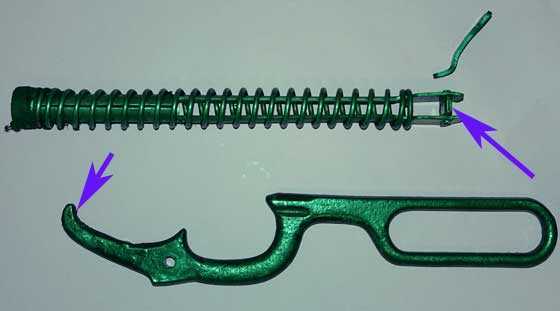 The anchor (upper right) came out easily. And there is the plunger assembly. The arrows show how the lever contacts and pulls back the plunger against the mainspring. A shiny wear mark on the plunger plate that can just be seen in this photo (left of the upper arrow) confirms this.

When the plunger came out of the gun, the damage to the seal was very clear. The leather had decomposed and was missing on one side. But that wasn’t all I saw. This plunger does not have the central air tube I was expecting to see. 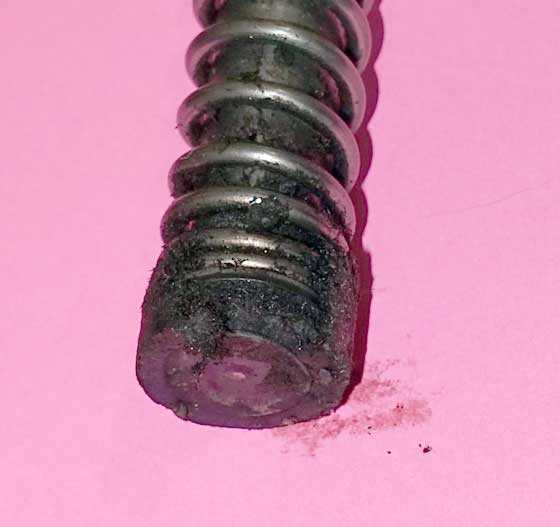 This photo shows how the plunger seal is disintegrating. It also shows a little of how the seal is held to the plunger tube. I think there has to be a cross-pin under all that gunk that holds the plunger head to the sheetmetal body. Notice there is no air tube on the end of the plunger head.

This plunger lacks the central air tube that starts the BB on its journey down the shot tube. Compare it to a modern Red Ryder plunger 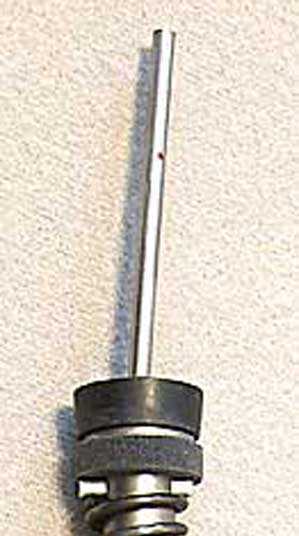 What this means is the Number 12 model 29 does not function like many BB guns. There is no initial push by the air tube before the compressed air blast hits the BB, sending it on its way. This piston in this gun acts more like a pellet rifle piston, in that it simply compresses air for the shot.

Daisy had perfected welding thin steel steel several years before this gun was made. For many years welding was impossible because the thin sheet steel of the tube evaporated in the heat. Daisy used to solder a patch on the underside of the outer tube to seal the seam and make the compression chamber airtight.

In the outer tube of this gun they put a sharp stepped crimp that holds a steel plate on the inside. That plate is the end of the compression chamber, made airtight by the weld. The single shot tube on the other side of the plate has a short tube that sticks through the plate and acts as an air transfer port — just like on a pellet rifle. Instead of the long air tube giving a starting push to the BB, it sits in the rear of the shot tube (the breech) until air pressure alone forces it to move! I have seen the inside of many folded metal BB guns, but this is the first time I have seen this design. 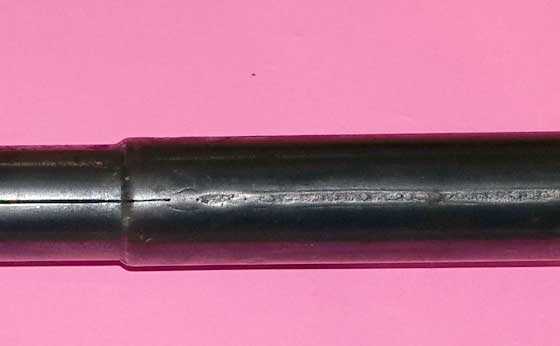 Here you can clearly see the weld on the seam of the folded metal. Daisy perfected this process (welding thin sheet steel is difficult because the metal wants to evaporate from the heat) several years before this gun was produced. That sharp step is actually a crimp that holds the plate that forms the end of the compression chamber inside the folded metal tube. 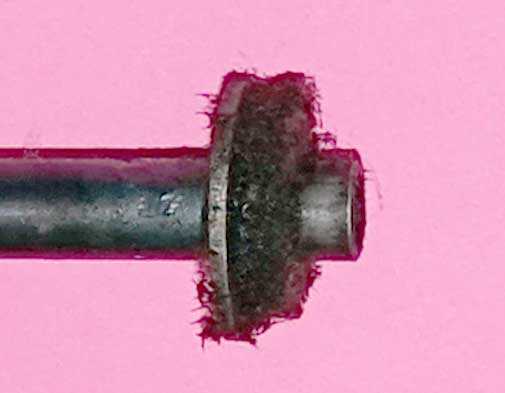 The rear of the shot tube has a short tube that sticks through the steel plate inside the folded metal outer tube and into the compression chamber. The leather washer around the base of the shot tube helps to seal the air on that end. It’s deteriorated, as well, and must be replaced.

I have to make a new leather seal for the plunger. There is no hope of finding another seal 90 years after the gun was made. I am pretty sure the head of the plunger is held to the sheetmetal body by a cross-pin — just like you see on the Red Rider plunger.

I also have to make a leather washer for the rear of the shot tube. At least that will be easier.

The inside of both the compression chamber and the place that holds the shot tube have to be cleaned before assembly of the parts.

These steps are much easier to describe than they will be to do. The thickness of the leather parts has to be close to the original if the gun is to work as designed.

There is a lot of work to be done! I have to source the leather and then shape and trim it and hope that it works when I’m finished. I guess I won’t be finished until it does work! Stay tuned.