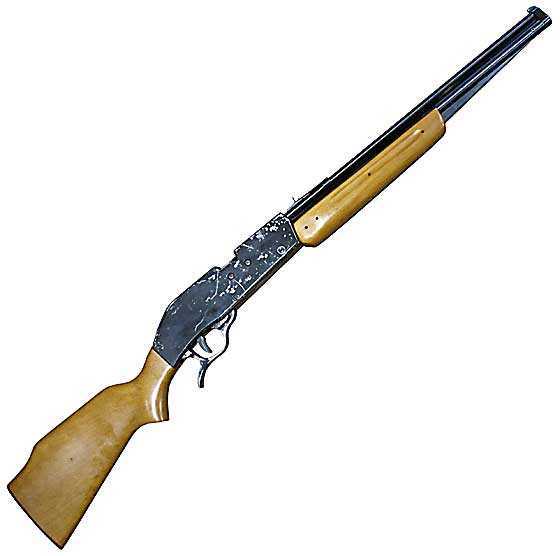 There was tremendous temptation to write about my new S&W 79G pistol today. In light of the excellent things reader 45 Bravo has told us, plus the testing I have already done on my .22 caliber 78G pistol, it seemed natural to transition into the .177-caliber 79G today. But not all readers like these pistols and I didn’t want them to think that was all I could write about. Like the Diana guns, these aren’t for everybody.

So today we start looking at the S&W 77A multi-pump pneumatic air rifle. This is the rifle I traded for at the recent Texas Airgun Show. The man I got it from said it shoots hard and I have shot it into duct seal a few times just to see. It seems to be right on for power. We will find out in Part 2.

Speaking of the Blue Book for a moment, there has been a change to their schedule. The book they thought would be out by now has been delayed until next year. Dennis Adler and I are now co-authors of the book, but you shouldn’t see many changes to the format because of that. However, my Gaylord Reports column will now have to encompass 4 years since the last book was published, so it will have to be longer. Okay, back to the 77A.

Back to the history

Smith & Wesson made their own airguns, which was not common for a firearms company. Most firearms companies like Winchester buy guns from other makers and have their names put on them. In fact Winchester was buying air rifles and pistols from Diana in the 1970s when the 77A was being produced. In 1974 their model 427 breakbarrel went for $47.95.

As we mentioned in the series on the 78G and 79G pistols, Smith & Wesson probably had at least one former Crosman employee on staff, because their pistol mechanisms are virtually identical to the Marks I and II of the Crosman line. But there are significant differences in the rifle that I will address in a bit.

The rifle is 40 inches long and has a 22-inch barrel that has 10 lands and grooves with a right-hand twist. The length of pull is 13-1/2-inches, so it’s made for older kids and adults. The rifle I’m testing weighs 6 lbs. 3 oz., though in the Shooter’s Bible it’s listed as 6 lbs. 8 oz. Obviously the varying wood weight makes the difference. The overall length is 4 inches longer than the 392 and it weighs three-quarters of a pound more. That gives this rifle a very substantial feel.

The metal parts are a combination of painted aluminum and blued steel. The only synthetics I can find on the outside of the rifle are the buttplate that has a nice S&W logo in the center and the spacer between the barrel and pump tube. The buttplate is slick, so be careful when standing the rifle up.

The wood on both the buttstock and pump lever/forearm on my rifle are dark blonde with very little in the way of figure. S&W said in their ad they were finished with a walnut stain, but that must have been on an earlier or later version. The finish on my rifle is light maple and I believe the wood is maple as well. The buttstock is held on by a bolt through the butt, and S&W has put small projections at the top and bottom of the pistol grip wood where the stock meets the receiver to keep it from twisting. That’s a nice touch!

The forearm has finger grooves on both sides that run just over 6 inches. They make holding the rifle feel very natural.

The rifle has open sights. A squared-off post in front matched a square notch at the rear. The sizes of the front post and rear notch are closely matched, so I should be able to do some good work with them, as long as my target is brightly lit. A 1973 ad I read promised dime-sized groups at 33 feet. I bet S&W never reckoned on old BB Pelletier coming along 50 years later and putting them to the test! I will assume they meant 5-shot groups, because that was what was popular at the time.

The rear sight adjusts vertically by means of a stepped elevator under the rear leaf. The steps are small, so I’ll find out how close it comes when I test the rifle for accuracy. The sight leaf is held to the barrel by spring steel legs that wrap around the barrel, and there is a small Allen screw on top to anchor it. The sight legs both touch or almost touch the plastic spacer, so I don’t think left and right adjustment is possible. 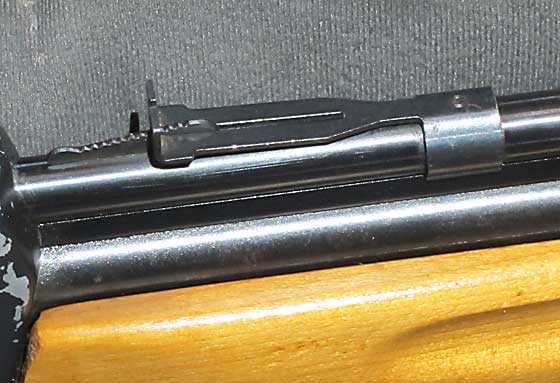 The rear sight adjusts for elevation but not windage.

One last thing — there seems to be an 11mm scope base on top of the action. There are two areas that have small dovetails that appear to be 11mm. The 1973 ad says the rifle is grooved for a scope, so I must be seeing it right. I will attempt to scope the rifle and we’ll see if it’s possible. The dovetails are very shallow which is why I’m waffling on this.

There are two dovetails (arrows) on top of the receiver that are supposed to accept an 11mm scope mount.

This is the strangest part of the rifle. It operates like a Farquharson! And everyone said, “A whaaaaat?” A Farquharson is a 19th-century British single shot falling block action that might look like a Ruger Number One to many shooters. Only it’s decades older and more complex. 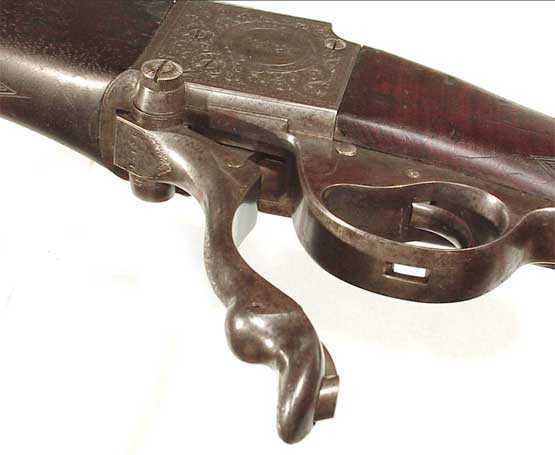 This view shows the Farquharson lever down, but the breech block has not yet dropped down 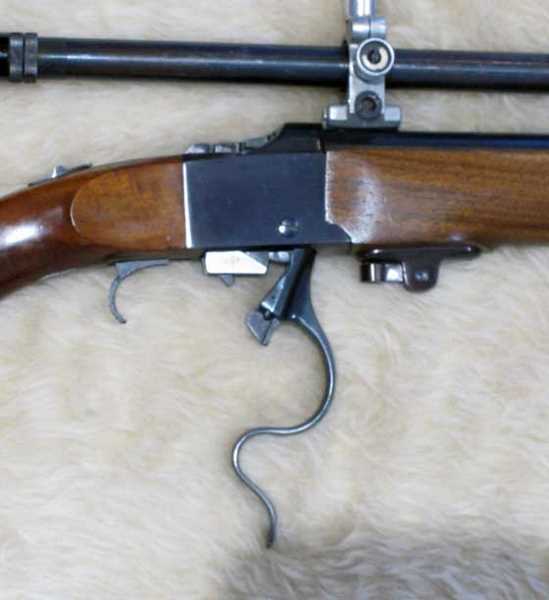 Ruger simplified the Farquharson action and produced it as their model 1 in the mid to late 20th century. This is the even simpler Ruger model 3 on my .32/40 schuetzen rifle.. 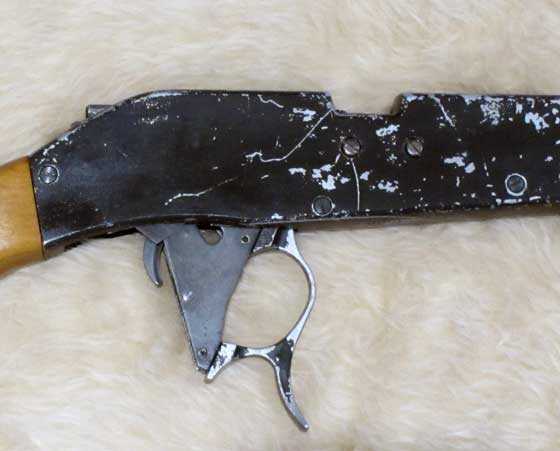 When the 77A is cocked the trigger guard and firing mechanism drops like this as the bolt probe is withdrawn in the loading trough.

You must cock the gun to charge it. If you don’t, the air rushes out of the reservoir. Normally that means the gun cannot be left with air in the reservoir, but there is a way around that. It is possible to leave the gun charged with air while not cocked, but it’s a complex process of cocking, pumping, taking off the safety, partially closing the triggerguard lever and pulling the trigger.

The safety is automatic and goes on as the rifle is cocked. The safety is a knurled knob that sits low in a groove at the top of the receiver, just ahead of the pistol grip. It goes easily on and off at any time. 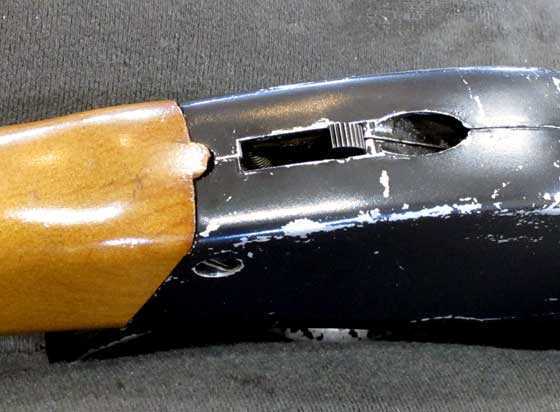 The safety is automatic. It’s on in this view. You can also see one of the stock tabs that keep the buttstock from rotating.

That’s a look at the gun I have. I am hoping I might be able to refinish (paint) the receiver to match the beautiful condition of the rest of the rifle. I don’t want it to look like a summer camp project though, so I will proceed very slowly.

This is the first time I have had one of these rifles in my hands. The more I examine it the better I like it, so I’m really looking forward to this test! 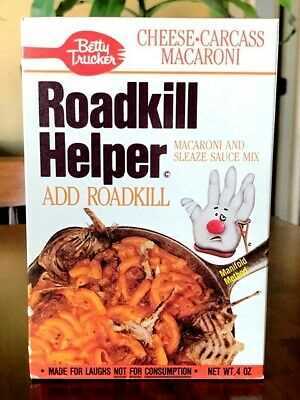