Today I test the accuracy of the IZH 46M target pistol. We already know it’s a bit more powerful than the standard IZH 46, but how is it downrange?

I shot off a bench at 10 meters. The pistol was rested several different ways that will describe as we go. I used a 6 o’clock hold, the same as when I shoot competition. I shot 5-shot groups that allowed me to test more pellets.

I had no idea of where the pistol was sighted, but since it has open sights I started right at 10 meters. Open sights may be a little off, but they don’t have the alignment issues associated with scopes.

First to be tested was the RWS Meisterkugeln Rifle pellet. I looked through the spotting scope after the first shot and saw that it hit the bull, so I didn’t look again. But the group was large. Five Meisterkugeln went into 0.672-inches at 10 meters. This is not the pellet for this pistol. 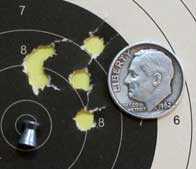 The next pellet I tested was the JSB Match Light. It was another one that’s not suited for this pistol Five went into 0.557-inches at 10 meters

I haven’t adjusted the sights yet. I know that each pellet will go to it’s own place, so adjusting the sights at this point seems futile, but since I did want to report how they responded to adjustment I cranked them down and to the left following this group. As I reported earlier, the adjustment knobs are clearly marked, and the sights do move with distinct clicks that I can feel but not hear. That may not mean much, though, because these days there are lots of things I can’t hear.

Other pellets and holds

For the first two groups I was holding the pistol at arm’s length. The pump cylinder was resting directly on the sandbag. I was holding the grip with two hands. But I noticed that this hold put a strain on both arms. The pistol seemed to be still, but I decided to try a different hold for the next group.

This time I brought the pistol closer to me. I was wearing reading glasses that enable me to see the front sight sharp and clear against a slightly fuzzy bullseye, and since that is the secret of accuracy with open sights I felt this hold was better.

The pump cylinder was still resting on the sandbag and I was still holding the grip with both hands so the pistol was steady as a rock, but the front sight was clearer with this hold.

The next pellet tested was the 7-grain RWS Hobby. The group was lower in the bull and also moved to the left a little. Five Hobby pellets went into 0.457-inches, so I think the sight adjustments work well.

At 10 meters 5 Hobby pellets gave me the first decent group, though I expected better from the IZH 46M. These measure 0.457-inches between centers.

The new hold also seemed to be working better than the first one so I continued it. I didn’t adjust the sights anymore because each pellet was going to its own place.

The next pellet I tested was the RWS R10 Match Light. My past experience with this 7-grain wadcutter is sort of binary. Either it works well in an airgun or it doesn’t. However, having said that the group I got was just average. Five pellets went into 0.56-inches at 10 meters. Even though it doesn’t look that bad I would say this is a case of not being right for this pistol.

If this group was made by most airguns it would be okay, but it’s not good enough for a 10 meter target pistol. Five RWS R10 Match Pistol pellets are in 0.56-inches at 10 meters.

After last Friday’s test of the IZH MP532 target rifle I saved what I thought might turn out to be the best pellet for last. After all, both the rifles and the pistols have hammer-forged barrels that are made in the same factory. You would think they would share some things.

I’m referring to the H&N Finale Match Heavy pellet that did so well in both IZH MP532 target rifles. I didn’t watch the target with the spotting scope as I shot because I wanted nothing to distract me for these five shots.

And the reward was the best group of the test — five pellets in 0.24-inches at 10 meters. Now, that is a group! It’s what I had been looking for all along. If laid over the center of the target it could score a perfect 50 points. I’m not saying it’s the best I have ever done with a 10-meter pistol — far from it, in fact. But it is a good group. 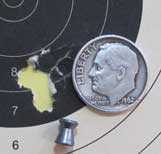 That’s what I was looking for! Five H&N Finale Match Heavy pellets went into 0.24-inches at 10 meters.

This was a quick and dirty accuracy test. I did shoot other pellets that were about as accurate as the Meisterkugeln Rifle pellets, but I didn’t bother showing them. If I were going to compete with this pistol I would test all premium match pellets in every head size I could find.

The IZH target pistols are no longer available to us in the United States. They are good target pistols but not world class. They have triggers so good that most shooters have never felt anything like them, and the accuracy is acceptable to almost every shooter. They respond to regular care and above all to oiling the pump cup. And in this series I have shown you how to revive those tired old seals through a process of flexing during shooting to warm and soften them. Don’t forget the value of oiling hardened seals with ATF Sealant.

A lot came with these pistols when they were new. This IZH 46M now goes back in the box with all that extra stuff so it will remain a complete package. This one will stay pristine and my other IZH 46 will be my Russian shooter.