When I started the report on the Gamo Swarm Fusion 10X Gen II I didn’t know I was kicking a Texas fire ant mound! Part 1 of this report lead to a report on the history of Gamo, and that brought the show to a screeching stop! I won’t get into all that transpired, but you can read the comments if you are interested.

I’m not going to defend or criticize anyone in this report. All I’m doing is testing another breakbarrel repeater for power, accuracy and overall quality as it pertains to airgunning. With that in mind, let’s start the show.

Reader Yogi mentioned that one advantage about breakbarrel repeaters is they make it easier for people to load the rifle. My brother-in-law, Bob, got an Umarex Synergis underlever repeater for exactly that reason. He is now shooting it with an airgun club and having fun with it. I can tell you this Swarm Fusion 10X magazine is very easy to load. You don’t even have to remove it from the rifle to load it, which means you can treat the rifle as a single-shot if you like. The pellet still has to be fed into the barrel from the magazine by the feed mechanism, but you can change pellets on every shot if you want to.

Gamo has long been a proponent of high velocity, and the advertised speed for this .177 caliber rifle I’m testing is 1,300 f.p.s. No doubt that is with lead-free Gamo Platinum PBA pellets. I will test it, of course, but it also tells me the powerplant is set up to handle heavy pellets. So I will test with those, as well. But let’s address the elephant in the room first.

This pellet is advertised to weigh 5.1 grains. I weighed 3 and got a range from 4.9 to 5.0-grains. Let me show you the string and then I’ll discuss it.

The “average for this string is 1154 f.p.s. but you’ll notice that no pellet went that speed. What we have here is a bimodal distribution, with 4 pellets going between 1114 and 1147 f.p.s. and 6 pellets going between 1161 and 1183 f.p.s. Either the gun is so new that it’s still breaking in, which is absolutely possible, or this rifle doesn’t like this pellet. That also seems possible, but I’m going to do a second test after I’ve tested all the other pellets to see which it is.

The velocity spread was 69 f.p.s. At the average velocity this pellet (using 5 grains as the weight) generated 14.79 foot-pounds at the muzzle.

At this point I have to say the rifle does not reach 1300 f.p.s. Not that it’s important — that’s not a velocity I want to reach. But it doesn’t.

I mentioned in Part 1 that the SwarmFusion is easy to cock. And it is, but even better, you don’t have to slap the muzzle to break the barrel open. It opens easily.

When I tested the rifle on my scale I was surprised to see the effort rise to 35 pounds. I would have bet money it was 10 pounds less. However, right after reaching that peak, the effort rapidly dropped back to less than 20 pounds. Then it hit me what is happening. Gamo has designed the cocking effort to peak at the point where you have the most strength and drop where your strength becomes less. It’s a geometry thing. That long cocking stroke has been engineered to help the shooter. I have to tell you — it really works!

The two-stage custom action trigger (CAT) trigger is adjustable — HOWEVER. I wanted to adjust stage two to have a shorter pull, and that adjustment is made with a tiny Phillips screw located behind the trigger blade. The slot through the trigger guard to get on that screw straight is too narrow for any of my Phillips screwdrivers that have heads small enough to work. It measures 5.14mm wide.

My drone screwdriver fits the screw head that I’m guessing to be zero-size, but the blade is too short to reach through the slot, and the handle is too wide (6.85mm) to pass through the narrow slot. There is a larger hole behind the narrow one, but it’s for removing the action from the stock. Attempting to use it with the Phillips screwdriver makes the angle of the screwdriver too far off what it needs to be for the driver head to bite into the screw head. Since Phillips screws are so easy to bugger I won’t adjust the trigger today, but I did order a set of precision long shank screwdrivers that should allow me to adjust it the next time I test the rifle. Shame on Gamo for not including a tool for this adjustment — or for not selecting a fastener that wouldn’t have this problem! 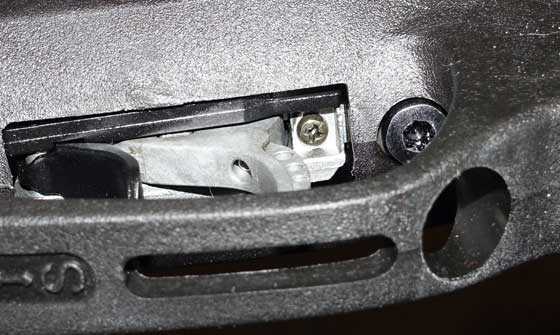 The slot the second-stage trigger adjustment screw has to pass through is too narrow for any of my Phillips screwdrivers. Going through the larger hole behind that hole puts the screwdriver tip at a bad angle.

Like the evening political news, however, all my complaining is meaningless because the CAT trigger pull is just delightful. Stage two has a long smooth travel. Just pretend it’s a single-stage trigger and you’ll be fine. The trigger broke at 2 lbs. 10 oz.

With lead-free lightweights out of the way, time to test the Swarm Fusion with a real lead pellet. Next up was the RWS Hobby — the lightweight pellet standard of the world. First the string. Don’t get used to this. I’m only showing it today because I need to talk about it.

The average for this string is 960 f.p.s. and, as you can see, this string is a LOT tighter than the first one. The extreme velocity spread here is just 22 f.p.s. At the average velocity this pellet generated 14.33 foot-pounds at the muzzle.

Now let’s bump the pellet weight up a bit and shoot the 8.3-grain RWS Superdome. First the string.

The average for the 10 shots that registered was 872 f.p.s. At that speed Superdomes generate 14.02 foot-pounds at the muzzle. The extreme spread for them was 18 f.p.s. The rifle may be breaking in, but as the pellets get heavier the velocity spread goes down.

I actually shot 12 pellets because of the two that didn’t register. Loading the extra two pellets was so simple, thanks to that magazine.

The last pellet I will test is the super-heavyweight H&N Baracuda Magnum. The box says they should weigh 16.36-grains, but the four I weighed varied between 15.4 and 15.8-grains. That’s a pretty big difference — both in the spread of pellet weights and also from the weight that’s listed on the tin! Three of the four weighed 15.8-grains.

Because this pellet is so heavy it is also very long. This gave me an opportunity to see if they would both fit into and cycle through the circular magazine. And, they did! Not a bit of trouble! Here is the string.

The Baracuda Magnum generated 8.77 foot-pounds at the muzzle, based on a weight of 15.8-grains that most of them weighed. The velocity spread was 23 f.p.s. I don’t think this is a good pellet for this rifle.

Now I wanted to test Gamo Platinum PBA pellets again. Remember they gave a bimodal distribution in the first test. First let’s look at the string.

The average for this string is 1153 f.p.s. — only 1 f.p.s. slower than the first string. The spread was 57 f.p.s. That’s better than the 69 f.p.s spread on the first string, but still way more than any of the other pellets. There is less of a bimodal distribution this time, but I now believe that it is the pellet and not the break-in that’s responsible for what we see.

The magazine functioned throughout the test without a slip-up. Fifty-two pellets fed smoothly through the gun. Have no concern there.

This test turned out differently than I expected. I expected the rifle to get over 1,300 f.p.s., because when Gamo says that they usually do. However I do like the trigger, and the rifle cocks easily despite the weight that I saw. The rifle is lightweight yet doesn’t  slap you when it fires, like many gas spring guns do. And the pellet feeding was flawless. I sure hope this rifle is accurate, because if it is, it’s a winner!