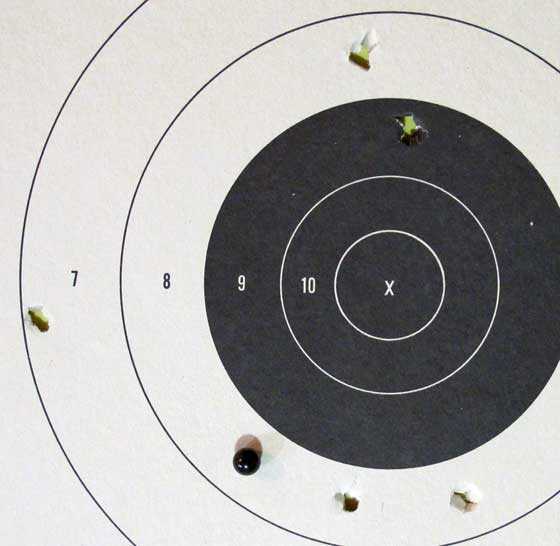 Today is a special report, done at the request of reader Michael. He wondered whether heavier airsoft BBs than I used in the final test of the Sig Air M17 ProForce airsoft pistol would be more accurate. Read what he said.

“I have always read that heavier Airsoft “BBs” are more accurate than lighter ones. One theory is that in order to be heavier, they are manufactured to have fewer and smaller gaps inside them. Theoretically, that would reduce imbalances in the sphere and make them spin and fly more true.

It was a good question and I thought I would give it a go. And then I remembered that I had tested two accurate airsoft pistols in 2019 — both the Sig ProForce M17 airsoft pistol and the ASG CZ 75 Shadow 2. If I was going to test Michael’s theory I should probably test both pistols. So I did, and today is the report. I have labeled all the links above so you can read the full report for each pistol.

The Shadow 2 is powered by CO2, so it’s fairly powerful. Its tactical rear sight adjusts for both windage and elevation, but I didn’t adjust it in this test. I also did not touch the adjustable Hop Up. This is just a test of the ammunition with the gun set at one single setting.

I shot both pistols off a sandbag rest at 10 meters. My hands were resting on the bag — the gun never touched it. I found that to be the most accurate way to hold both pistols. And I am only shooting 5-shot groups today because of all the shooting there is to be done.

These BBs are from Crosman. They have a dark finish, are double polished and apparently not biodegradable. They are lighter than the 0.26-gram TSD Bio 180 BBs I tested earlier with the Shadow 2, which were also the most accurate. The Shadow 2 put 5 of those into 1.194-inches at 10 meters.

The Shadow didn’t like these BBs and put 5 into 3.808-inches at 10 meters. I didn’t use the dime for groups like this for obvious reasons.

I had forgotten just how sweet the Shadow 2 trigger is! All my pistol triggers should be as nice. It has a long first stage and a crisp stage two that’s incredibly light. It made the pistol a joy to shoot.

The next BB tested was the ASG 0.30-gram Blaster Devil. They are white BBs that are also not biodegradable. The Shadow 2 liked them good enough to put 5 into 1.899-inches at 10 meters. That is better than the best target the pistol shot last year (1.954-inches).

Next to be tested were five Umarex Elite Force Milsim Max 0.32-gram BBs. They are white and they are biodegradable. But the Shadow 2 didn’t like them. I shot 5 but only got 4 holes on the target. It’s possible that two BBs went through the same hole but I cannot see that they did. The centers of the 4 holes are 4.34-inches apart. 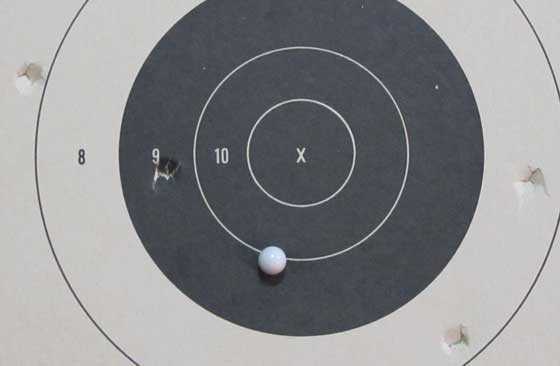 Only 4 BBs seem to have hit the target. Their centers are 4.34-inches apart.

This is the one for the Shadow 2! Of the 5 BBs tested, this one was the most accurate. Five Wearsoft Sniper Grade 0.36-gram BBs landed in a group measuring 1.245-inches between centers. This is a BB I would spend time with, adjusting both the sights and the Hop Up. It’s a black BB that’s not biodegradeable. It comes in a 2000-round resealable bag rather than a bottle. 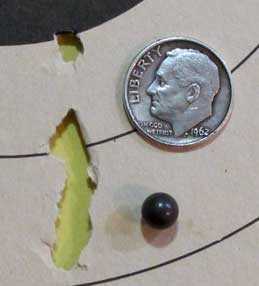 The last BB I tested was the Swiss Arms ProGrade 0.36-gram. It’s a black BB that’s not biodegradable. The Shadow 2 put 5 of them in 3.866-inches at 10 meters. Three of them are grouped nicely in the black, but the other two went high for some reason. 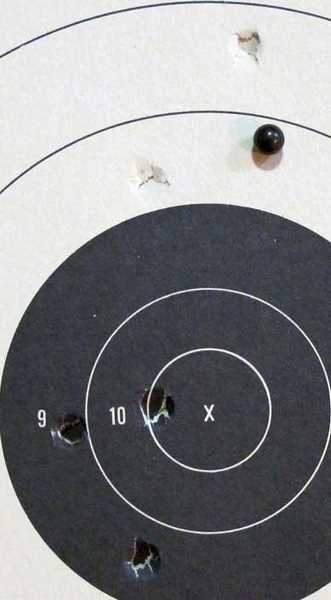 So, what’s the verdict. Well, Michael was right about heavier BBs being more accurate. But what I haven’t told you is how much drop there is. When you go heavier than 0.30-grams the BBs slow way down and I wouldn’t want to shoot many of them in a skirmish. As accurate as the Wearsoft 0.36-gram BB is, I think the ASG 0.30-gram Blaster Devil is the more suitable of the heavies because of the increased velocity over the Wearsoft.

Before I continue, have you noticed how many titles these airsoft BBs have in their names? Apparently the airsoft world is motivated by impressive names. Well, I have one for them — the Ubiquitous and Devastating Terminal Mega Blaster! I’ll take a quarter for that, please.

On to the Sig Air M17 ProForce

Now I moved to the Sig Air M17 ProForce pistol. I tested it in October and November, 2019. You may remember that this pistol is sold as a CO2 pistol but there is also a green gas magazine available separately. Sig Air made that magazine available to me to test, so that is the mag I used for today’s test. It was the more accurate of the two mags when I tested the pistol with lighter BBs last year, but after seeing today’s results I see that need to switch to the CO2 mag for a final test.

Where Game Face Maximum Precision 0.25-gram BBs weren’t so hot in the Shadow 2, they were actually the best in the M17 with the green gas mag. Five went into a group measuring 1.807-inches at 10 meters. In the last test of the M17 the most accurate BB grouped five in 0.80-inches. I was so impressed at the time that I shot a second five and got a 1.21-inch group. So today’s best isn’t up to what we saw before. 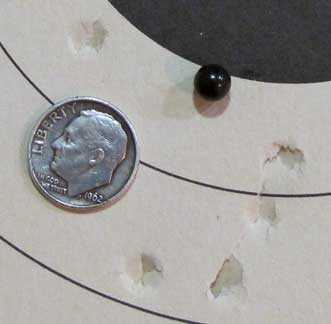 The Sig M17 did best with the 0.25-gram Game Face 0.25 gram biodegradable BBs. I will put that down to the lighter weight of the BB because I’m running on green gas, though that wasn’t apparent until the end of the test. Five went into 1.807-inches at 10 meters. 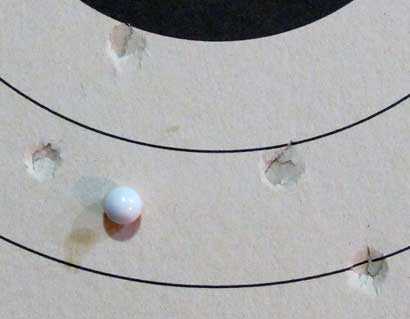 After the Blaster Devils the M17 shot 5 Elite Force Milsim Max 0.32-gram BBs into a group that measured 4.482-inches between centers at 10 meters. Obviously this is not the right BB for the M17 on green gas! 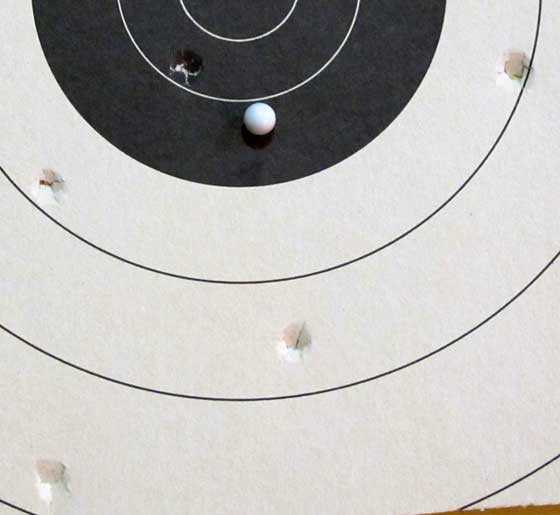 Now we are getting way too heavy for green gas. The time of flight became noticeably longer with the two 0.36-gram BBs and they dropped lower on the target, necessitating a sight hold at the top of the bull instead of 6 o’clock. Five BBs landed in a group measuring 2.936-inches between centers at 10 meters. 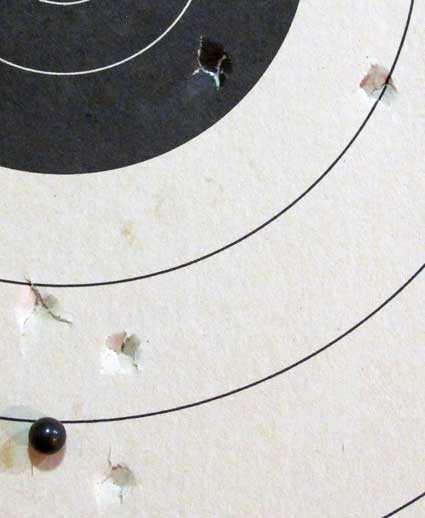 The last BB I tested in the M17 with the green gas magazine was the Swiss Arms ProGrade 0.36-gram BB. Once again, these are too heavy for green gas, so I aimed at the top of the bull instead of the bottom. Five BBs went into 2.898-inches at 10 meters. But notice that four of the five are closer together at the bottom of the target. They are 1.656-inches between centers. Some of the group size could be attributed to how I was aiming. So, with the CO2 mag, this BB could be viable. 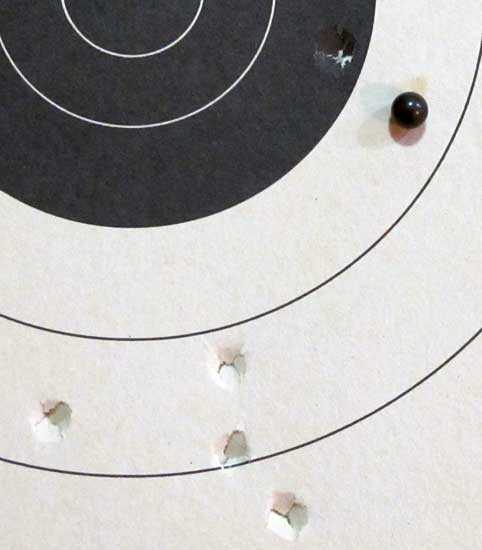 I had to get through the entire test to realize that these heavy BBs were too heavy for green gas. This test had already taken so long that I decided to test the M17 on CO2 at a later date.

Michael was right about heavier BBs being accurate. But we must bear in mind that accuracy means little to a tactical airsoft player if his BBs drop too fast in flight. The solution has to be a BB that’s both accurate and also reasonable for engaging action targets.

We must also bear in mind that sidearms like these two pistols are not the primary weapons of a skirmisher. They are a backup to be used when reloading or attending to the long guns in some other way. You don’t need pinpoint accuracy by itself. You need the right combination of all things, with accuracy being important but not the only criterion.

29 thoughts on “What effect do heavier airsoft BBs have on accuracy?”