Get ready for an odd report! Today we look at the velocity of the ASG CZ 75 Shadow 2 airsoft pistol. As I told you in Part 1, this is not your run-of-the-mill airsoft pistol. It retails for $180 and is considered a serious competition airsoft gun — just as the thousand-plus dollar firearm (suggested retail of $1,349.00 for the USPSA Production Division) equivalent is considered ready-to-go right out of the box. Of course no champion will ever leave a gun alone — be it firearm or airsoft, so look for another $500 to $1,000 worth of modifications and accessories to be to be bought/made for/ to the airsoft gun — so long as they remain within the rules.

I have officially given up buying a 9mm firearm for every airgun lookalike I own, and that’s a good thing, because this one would push me to the limit.

The history of airsoft

Airsoft is relatively recent. It was invented in the orient — Japan, I’m pretty sure. It was developed so people with a desire to own guns could have something realistic without endangering anyone. The early guns were extremely realistic and some sold for thousands of dollars. A wooden-stocked Browning Automatic Rifle that you can buy today for just $300 once sold for well over $3,000 when airsoft was new. Of course the older gun was made with many actual firearm parts and was fully the equal in size (47 inches) and weight (24 lbs. for the M1922) of the firearm. Today’s gun is engineered to be produced and has no firearm parts whatsoever. At “just” 11 lbs. it’s a lightweight. But it’s a very impressive thing, nonetheless.

For many years airsoft just fulfilled the collector’s dream of a realistic thing that was also legal to own. Its principal market was Japan, where firearms ownership is generally prohibited.

However, airsoft had one redeeming aspect. It wasn’t that powerful. The guns are made to launch 6mm plastic balls that the Asian manufacturers call BBs at low velocities. Boys being boys all around the world, it wasn’t long before the guns were pressed into service for “capture the flag” skirmishes. The press said it was a safer alternative to paintball, where people were getting injured, and indeed it was, but what it actually did was shift the BB-gun wars from real BB guns to airsoft.

And before long the cry went out for more power! They said velocity, not knowing that it equates to power. And today the world of airsoft is split into divisions that include the skirmishers, the history buffs and the shooters. We have now at least identified the first two groups, but who are these shooters?

I don’t think target shooting has taken off yet, but action pistol shooting — called International Practical Shooting Confederation (IPSC) for firearms and Action Air for airsoft has. If you want to see some of the best, watch this video.

How accurate is airsoft?

My introduction to airsoft came at the 1999 SHOT Show in Atlanta. I was visiting the Leapers booth and owner, David Ding asked me if I wanted to try an airsoft gun. I said no, I was just interested in accurate airguns. He then proceeded to shoot a small wastepaper basket that was 100 feet away five times in succession and I was hooked! “I’ll take several, thank you!”

These were spring guns that sold for about $20 retail, so we are not talking high tech. They were M1911A1 repeaters whose slide had to be manually retracted for each shot. Back at my motel room I was able to get about 17 feet of distance and, once I found the aim point, I could not miss a hotel soap bar. For those who don’t know, hotel soap bars are about the size of a lollypop that’s been in your mouth for half an hour — at least they are in the hotels where I stay. A matchbook is larger.

I could not believe the accuracy of this cheap little airgun. It shot flat and true for over 150 feet. Edith and I were popping the neighbor’s hubcaps surreptitiously for days! As weak as the guns are they made a satisfying “clink” when they hit, but left no mark on even a dusty surface.

Well, that got me into airsoft! For the next several years I wrote about airsoft for my newsletter, for Shotgun News, and even for this blog and for the Pyramyd Air articles section. I tested a lot of the automatic electric guns (AEG), tuned up a couple sniper rifles and even shot some odd guns that had dual magazines for green gas and CO2. I even made a film about airsoft for one of the larger retailers in California.

This pistol operates on CO2 — a powerful gas that isn’t normally used for airsoft. The gas that’s more common is green gas that has a vapor pressure of about 115 psi at room temperature. CO2 runs at 850-900 psi at room temp., so the valve has to control it, because the 6mm balls it shoots are so light they offer little resistance.

The plastic balls this gun shoots weigh 0.25 grams, which is nominally 3.86 grains. While that’s on the heavy side for airsoft, it’s even lighter than a steel BB. ASG sent me a large bottle (3,000 count) of 6mm 0.25-gram BBs to test with the gun, so I weighed a few. Of five BBs, four weighed 3.9 grains and one weighed 4.0 grains. Steel BBs should be so close!

The BBs they sent are biodegradable, which means I can shoot them in my back yard and not work about where they go.

I have other BBs I will try when I test the gun for accuracy. Airsoft ammo has just as big an impact on accuracy as any other ammo.

Let’s get to the good stuff. To load a CO2 cartridge, the magazine floorplate must be removed. It’s held on by a spring-loaded pin through the plate and at first I thought it was one of the old designs that needs a pen to push down on the pin as you remove the plate. Then I read the manual and learned that no tools are required. This mag is designed so the pin can be retracted by your finger while holding the mag.

The floorplate has been removed so you can see this better. My thumb is about to pull the spring-loaded pin out of the way so the mag floorplate can be removed. 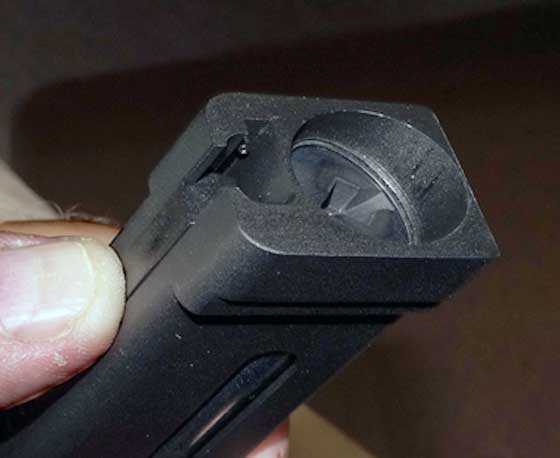 And here the spring-loaded pin is pulled down out of the way. The floorplate comes off easily because of this feature.

The reason this is important is because the floorplate has to be removed every time you change cartridges. That is, it does if you want the gun to look realistic. It is possible to just use the magazine without the floorplate being attached. All you loose is the look. In fact, when I tested the velocity that’s how I did it.

Once the floorplate was off there was access to the screw cap that puts tension on the CO2 cartridge. I installed a fresh 12-gram CO2 cartridge, using the large Allen wrench that came with the pistol. ASG sent me a spare magazine, as well, and that also came with an Allen wrench of its own. Naturally I put a drop of Crosman Pellgunoil on the tip of the cartridge before inserting it.

I noted that when I turned the wrench the cartridge was pierced but the gas didn’t seal right away like it does on some airguns. I had to put an additional half-turn on the wrench to seal it. Sometimes these things seal so fast you don’t even hear them puncture, but this time I needed to go a little farther to seal the cartridge. I expect that will be the case every time.

The gun was now pressurized and it was time to load the BBs. For that you pull down on the follower in the magazine and drop the BBs in the follower groove where it gets wider near the bottom. The manual says the magazine holds 26 rounds. I was able to put 24 BBs in and there was one void in the stack where a BB was missed. 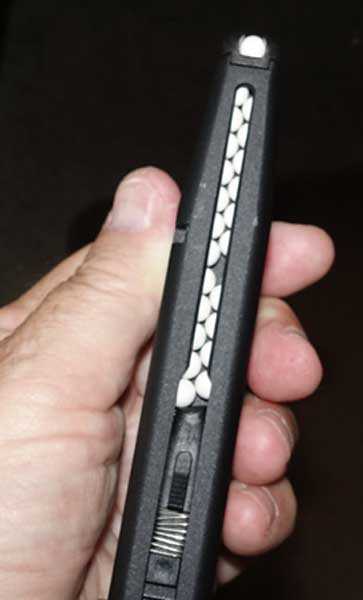 I got 24 BBs into the magazine without much trouble. Loading it full takes a lot of care!

You have to hold the follower down as you load the BBs. I haven’t found a way to lock it in place like many magazines have. That would be an improvement, because those little plastic balls are slippery and difficult to control!

I tested only the 0.25-gram biodegradable balls that ASG sent with the gun. I shot fast, taking only the time necessary to record the velocity. That’s a shot about every 3-5 seconds. The pistol is semiautomatic, which made it easy. Here are 10 shots.

The single action trigger pull is 1 lb. 5 oz. The only handguns I own with triggers that are lighter are two FWB 10-meter target pistols and an IZH 46. This is a drop-dead gorgeous trigger!

The metal slide blows back on every shot. It gives a sensation of recoil, though it’s pretty light.

Because this is an airsoft gun that only shoots 300 f.p.s. and because the BBs I’m shooting are white, it was easy to see how this pistol is shooting. Get as far back from my dark gray fence as possible (20 yards?) and shoot at the fence. With the BBs going that slow it’s easy to see if they curve to the right or to the left. But they didn’t curve at all! Wonder of wonders, they shot as straight as a laser, because the backspin on the ball also didn’t allow them to drop. For you American readers, shooting this pistol is like watching a major league pitcher throw a fastball that’s a rope!

If the BBs had been off to one side or the other I was prepared to field-strip the pistol and adjust the Hop Up. I showed that adjustment to you in part 1. 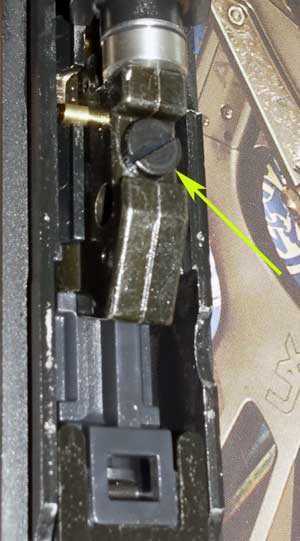 To adjust the Hop Up (that controls where the BBs go — left or right) it’s necessary to field-strip the pistol.

So far I am, to quote the 17th-century British sailor, “Impressed!” I wish “they” would make a version of this pistol as a real BB gun with a tight barrel in the style of the M1 Carbine and the new Umarex Legends Cowboy Lever Action BB gun. Bob Li — now I’m pulling your chain, because you want this as much as I do.

Realism and quality this fine need to be spread around. I can’t wait to see how it shoots!