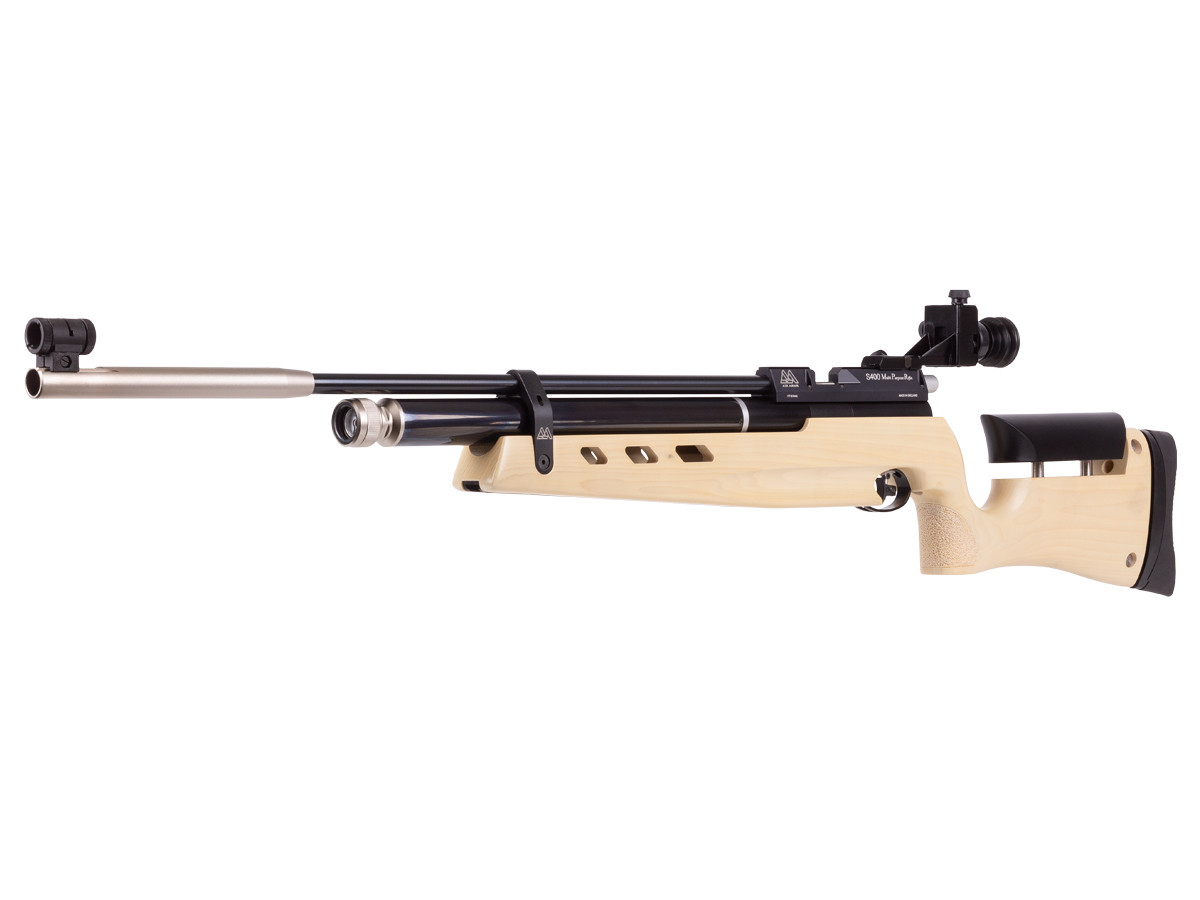 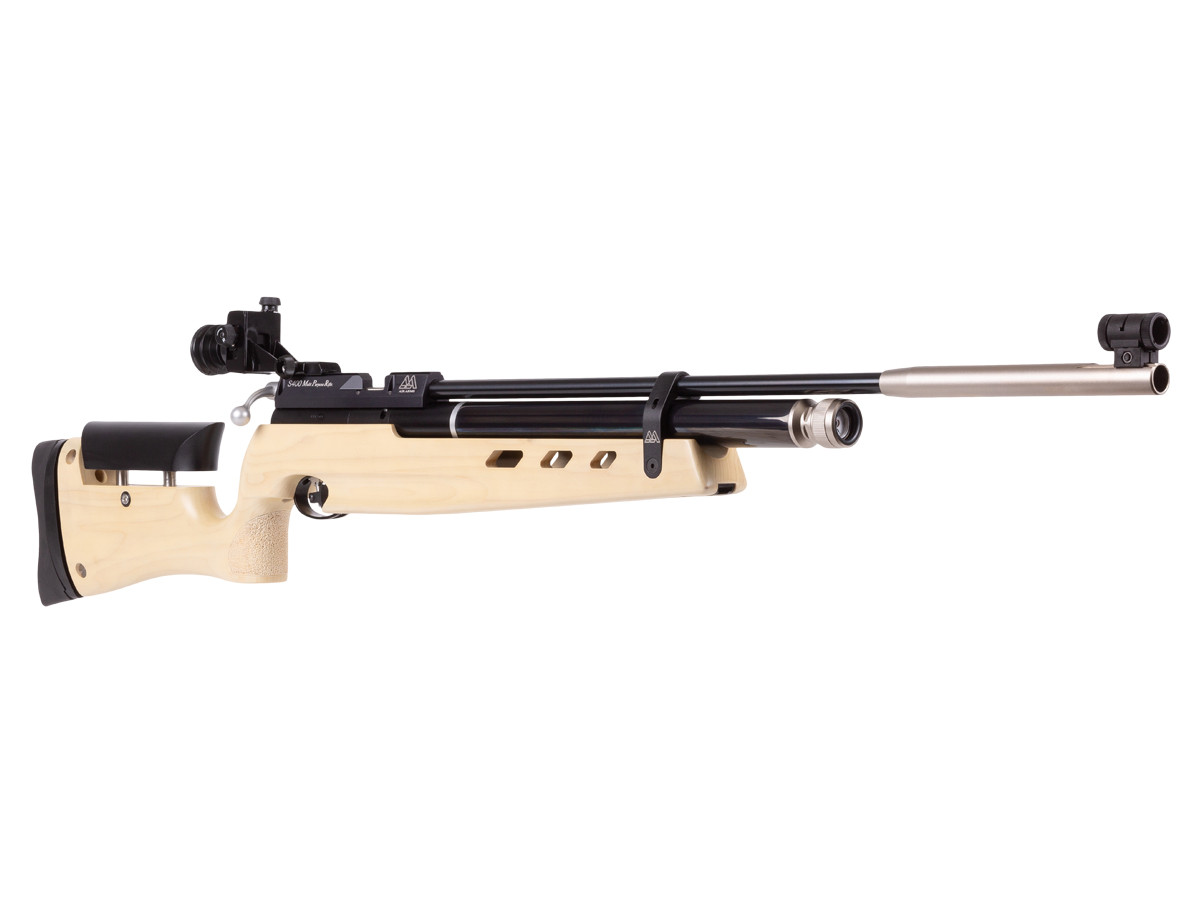 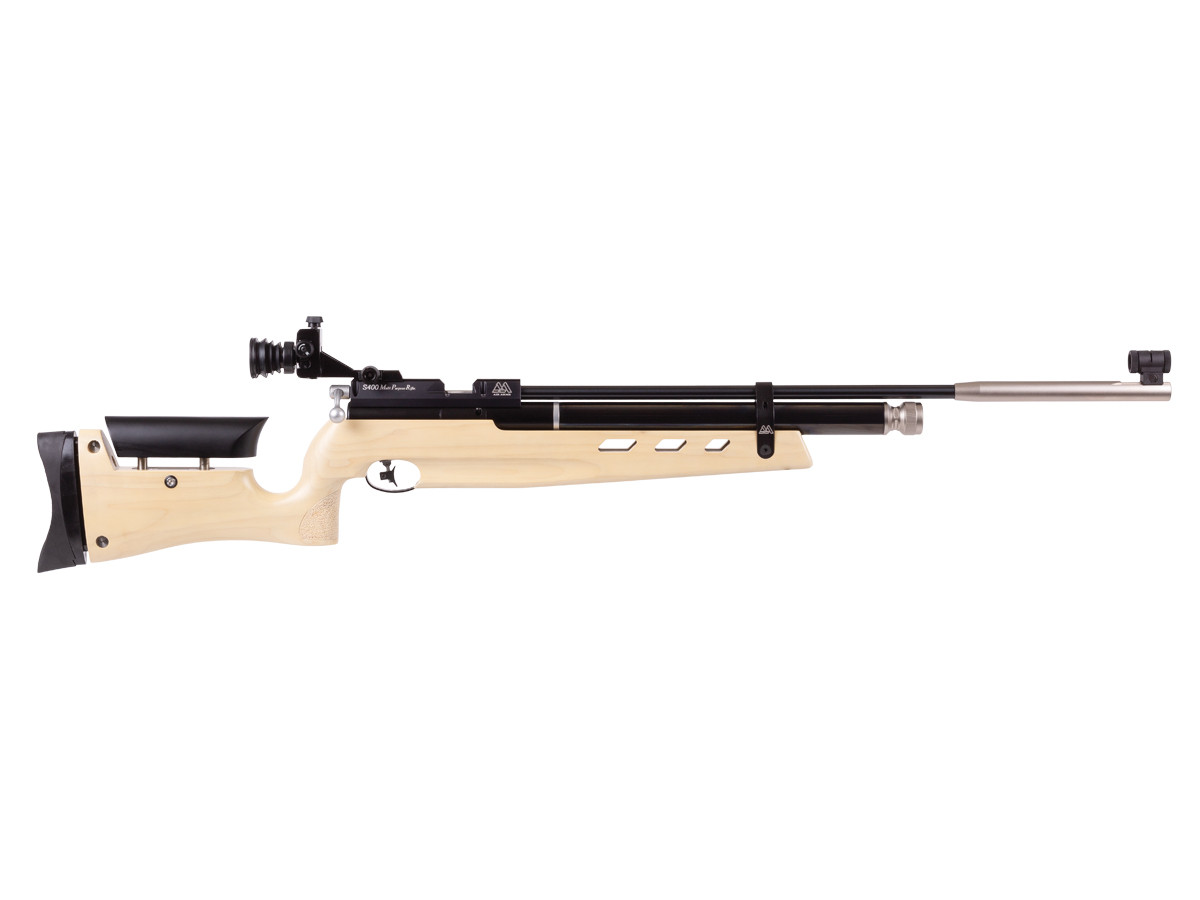 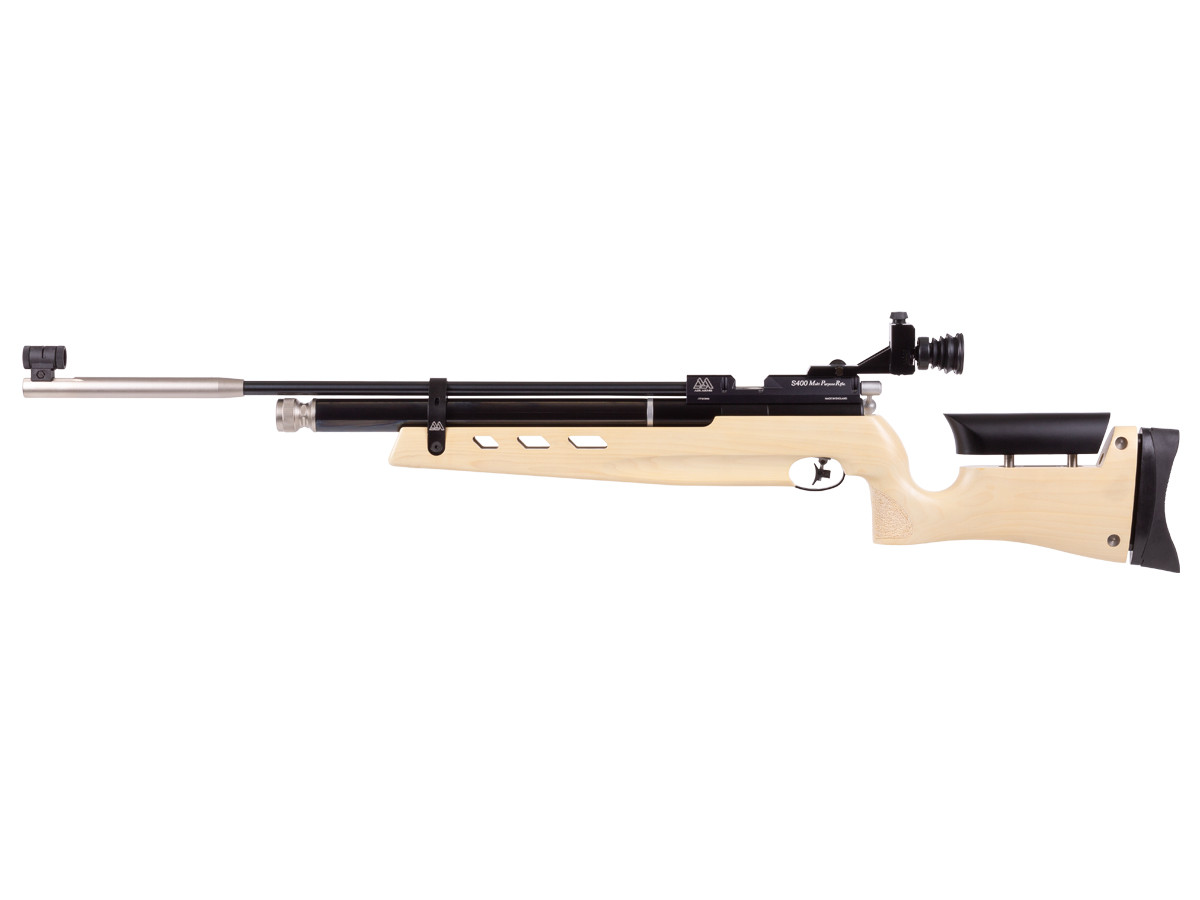 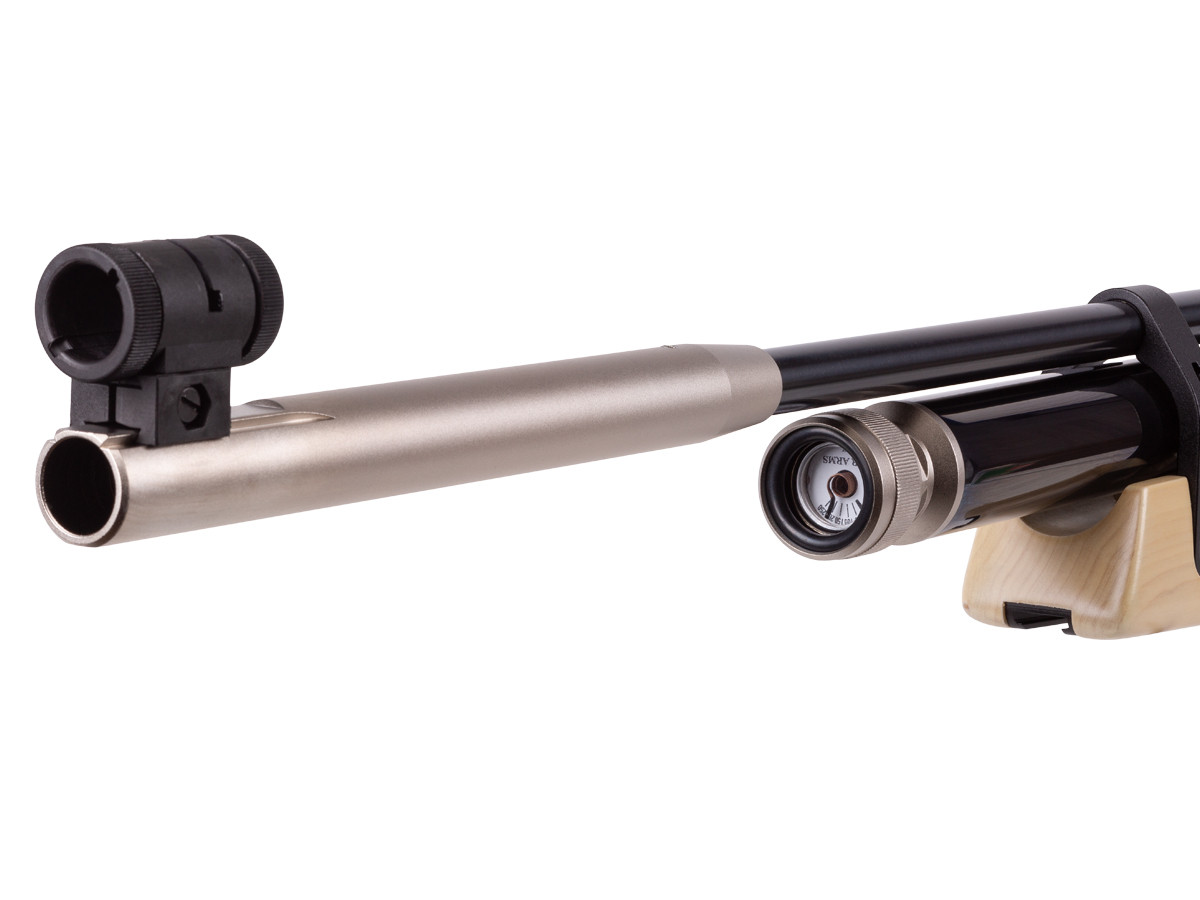 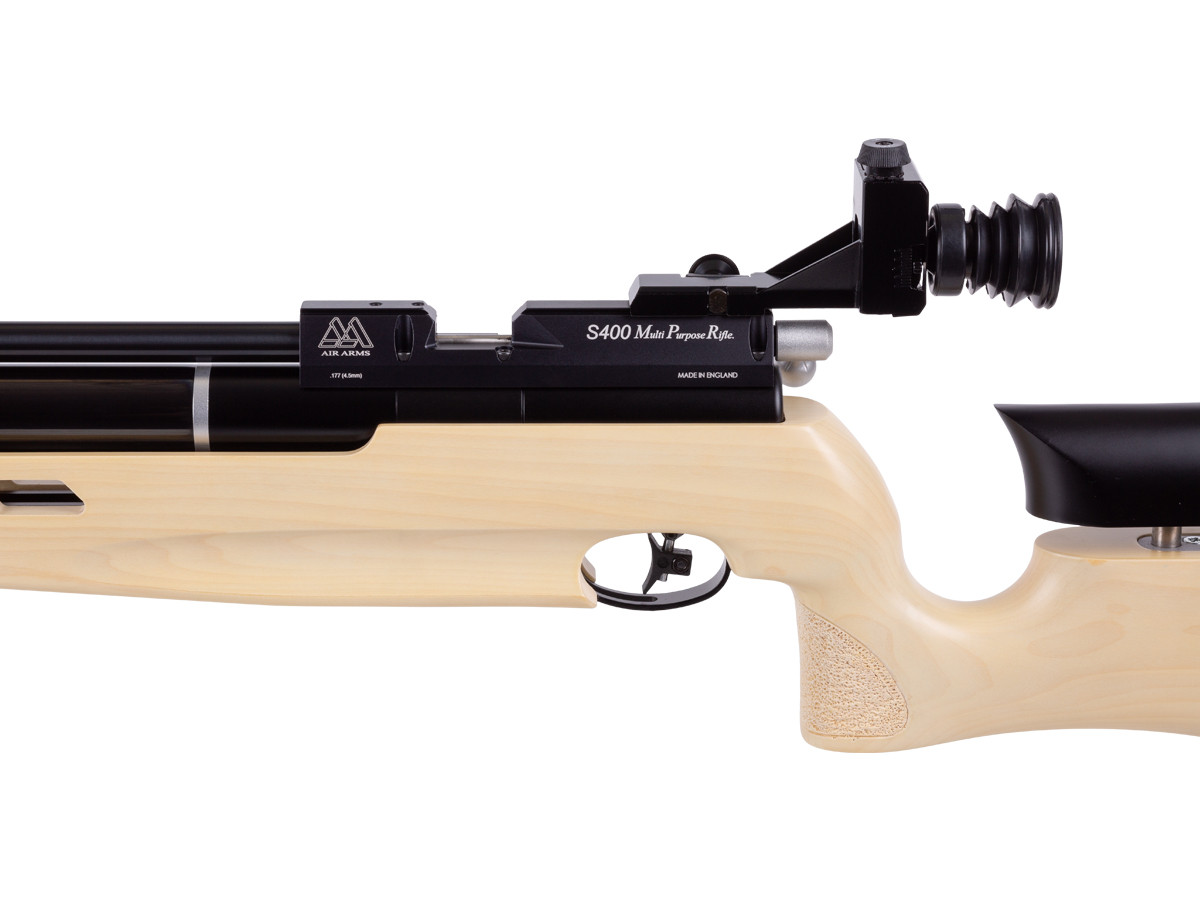 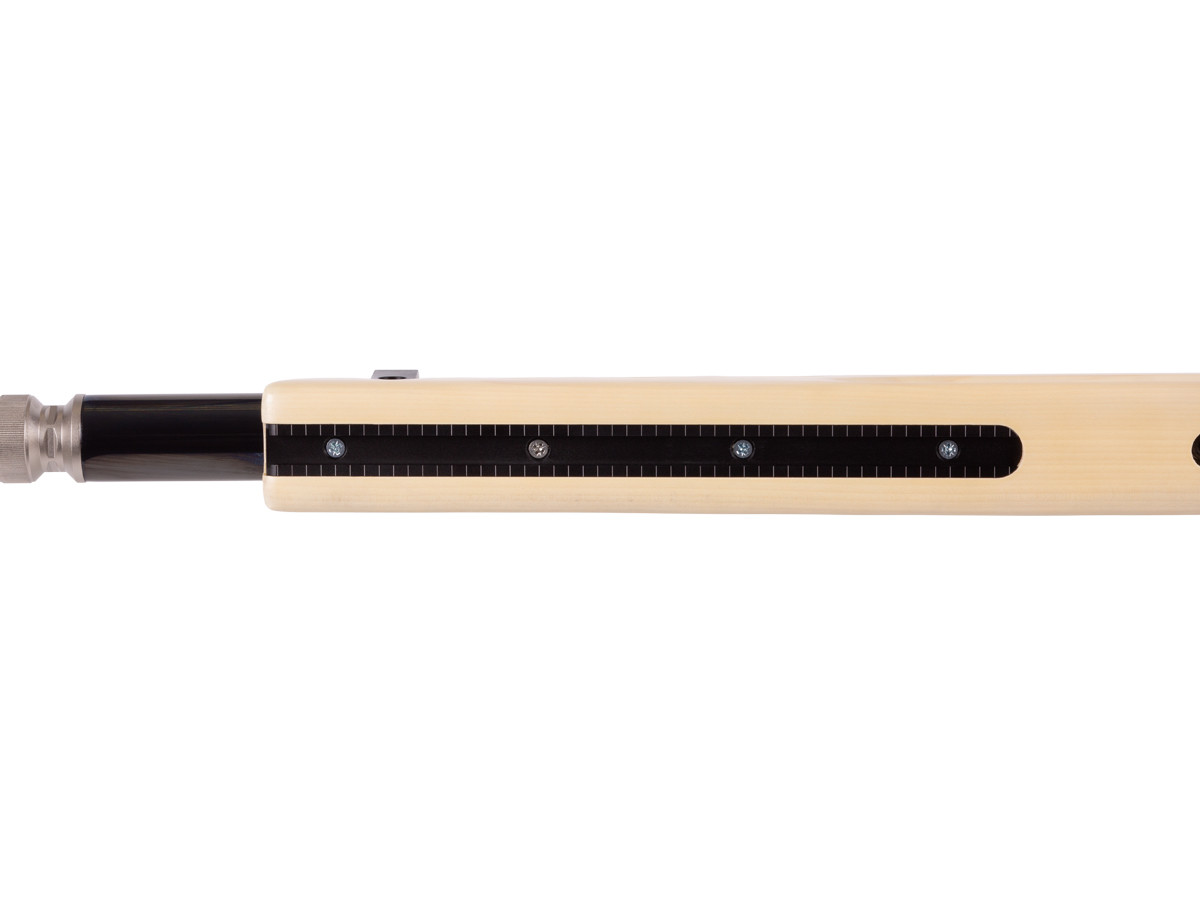 Out of stock
Estimated in-stock date 07-25-2022. Place your order now for delivery priority!

To fill the gun, unscrew the air reservoir and attach it to the 200-bar DIN hole of a scuba tank or hand pump. The end of the reservoir has a manometer (air pressure gauge), so you'll always know how much air is left in the tank. The correct air pressure for the MPR is 200 bar (2,900 psi).

If you enjoy winning 10-meter matches, the Air Arms S400 MPR Precision air rifle can help you achieve your goals! 80% of the value for 40% of the price!

Out of stock
Estimated in-stock date 07-25-2022. Place your order now for delivery priority!

I received my Air Arms S400 MPR rifle today. Out of the box it was perfect - stock, bluing, finishing everithing was perfect. It has 150 BAR still in the rifle and because I didn't have received my HIll MK4 pump I tried it as is. I put one of my Bushnell Elite 6-24x40 Target scopes on it and sight in with a few peletts. I started with RWS R10 pellets. The first group of five was - literaly - one pellet diameter hole. I was impressed! I tried different kind of match pellets and I can clearly say - the accuracy is AT LEAST equal to my FWB 300S or even better. S400 MPR rifle has a super smoot bolt and an upgraded fully adjustable metal buttpad. It is verry comfortable to shoot. The trigger is not as light as on the FWB 300S but still verry good for the target shooting.

Nothing - perfect rifle for the money!

Just received my S400 yesterday and love it. Just started on sighting it in with benchrest and already putting pellets through the same holes. Great accuracy out of the box. Fit and finish on mine is immaculate. I have seen a few issues noted in previous reviews about some minor stock problems but mine came perfect. Machine work is very good. I would imagine that any problems I have shooting competitively is going to rest on my shoulders and not the guns.

I think this would be a great gun to get your feet wet in 10 meter matches. Larger individuals may need to add some spacers to the butt stock to adjust your pull but everything else in my opinion is pretty easily adjusted on this gun. Maybe a bit pricey but from what I've seen accuracy wise so far it's worth it. Just be sure and try different brands and weights of pellets to get the most out of her.

It is very accurate in my opinion, but I have never shot anything more expensive than this rifle. For testing I bench rest from a standing position because I have to shoot from my basement up half a flight of stairs into the garage to get a 10 meter distance. The pellet trap in the garage is at eye level. This makes my shooting from a rest at about a 5 foot height not as steady as I would like. However, if I am real careful, I can normally get groups of 0.035 to 0.050 CtC with a UTG scope at 12X and R-10 pistol pellets. With a real Gamo aperture sight I get groups of 0.036 to 0.077, not being really careful with the biggest ones. It might also be my 70 YO eyes with aperture sights. The workmanship on the rifle is excellent, except as noted next. I also really like the trigger and the trigger adjustability on this rifle. I thought my Marauder was good until I shot this rifle.

QC at Air Arms seems to be somewhat lacking. Shortly after I unpacked the rifle, I noticed cracks in the varnish/lacquer starting at the stippling and going back about an inch. I wrote an email to PA over a week ago and have not gotten a response. I then sent another email yesterday with close up photos attached and are waiting for a response. After I sent the latest email, I examined the cracks more closely and discovered that they also go into the stippling and seem to be into the wood and not only the finish coat. If this were a $300 rifle then I would not be concerned with the small cracks, but a $1000 rifle should not be shipped this way.

If you order one of these, expect very good to excellent accuracy, but examine the woodwork very carefully, as from mine and a couple of other reviews, it seems that the Air Arms workmanship and QC on the stock can be hit or miss. The velocity is somewhat less than shown in the specifications. Using 7.0 gr R-10 pistol pellets, it averages 535 fps at 170 BAR, dropping to 524 fps at 150 BAR and 506 fps at 130 BAR. At 135 BAR the POI at 10m has dropped about 0.030 inch from what it is at 170 BAR. At 110 BAR the velocity averages 488 fps. I kept track of the number of shots the first time I shot it and I got 105 shots from 170 BAR down to 130 BAR. AT 110 BAR I had gotten 140 shots. I used a magnifier to try to get an accurate pressure reading on the small reservoir gauge.

Thank you for your comment!
In my first email to PA I also mentioned that the Foster adapter that I also bought was missing the Delrin seal. The day after I submitted this review I received a seal in the mail, so PA did respond to my first email. I then decided to call PA about the cracks and was connected to a very helpful lady who worked to resolve the problem. After checking she called me back and said to send the rifle in for a warranty repair. PA sent me a return label. Since the rifle shoots well, PA just replaced the stock and returned it to me. The new stock is perfect and they turned it around the same day they received it. If I could I would add 1 star back for PA handling of the problem. The Chinese made Gamo clone rear sight on this rifle and several other brands in this price range and below is not up to the accuracy of the rifle. It sticks with the first few clicks and then jumps. My old real Gamo sight sticks less, but I bought the AirForce rear sight. It is so much better.
Add comment to this review
View All Reviews
+ Load More