Today, I’ll document the build of the AR-15 lower receiver that was required for the test of the Crosman MAR177 upper. This was a fascinating and somewhat scary project, because I was venturing into waters that, for me, are uncharted. On one hand, I know that the AR-15 is a popular firearm, so I expected to find all the information I needed to build the lower receiver on the internet. On the other hand, how good that info might be was completely unknown. I was scared because it has been over 30 years since I have had an AR apart, and even then it was only to clean the rifle after firing. I never had to build one.

After seeing my level of expertise with woodworking (the ill-fated Bronco article in which I destroyed the stock to mount a peep sight), you might feel some concern for my abilities as a gunsmith. Fear not. I used to make a nice part-time income from tuning single-action Colts, and I’ve tightened and accurized several M1911A1 pistols with demonstrably good results. Though I’m no craftsman, I can gunsmith metal parts when I need to.

It’s not that hard!
I needn’t have worried. The lower receiver of an AR-15/M16 is a very uncomplicated design and goes together without a lot of trouble. You do have to take some care with certain parts, as the receiver is made of aluminum and will break if handled improperly. Besides that and a couple small springs that fight to escape, there’s really nothing that’s too difficult if you take your time.

Step one was to photograph the parts that Rock River sent for the lower receiver. This soon proved invaluable when one of the smallest parts went missing for several minutes during the assembly. When I got to the place where I needed the part, a wee-teeny pin called a bolt catch buffer, but couldn’t find it, I assumed that Rock River had failed to send it. That infuriated me, because how was I supposed to know I needed one, since this was my first lower to build? This was the greatest fear I had about building this lower receiver. 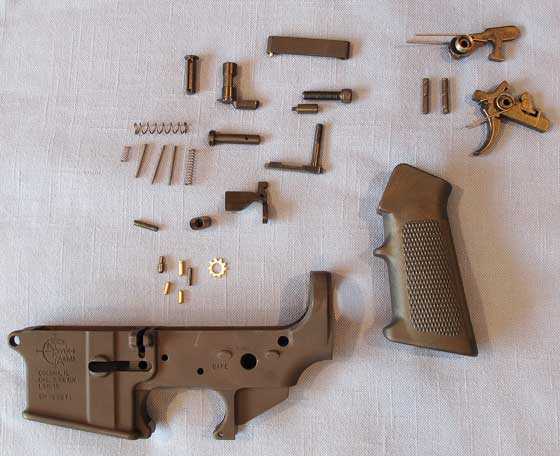 The Rock River Arms lower receiver and the parts kit that goes into it.

I searched everywhere, even to the point of getting down on the kitchen floor (yes, I actually did do all the work on the kitchen table), where I found a small black beetle about the same size. He was dead, plus he didn’t have the same internal dimensions as the part I was searching for, so I kept looking. I even called Edith in on the hunt, since she has a better record for finding escaped parts.

After a while, I was certain Rock River had omitted the part from the kit they sent, so I checked the photo I had taken earlier of all the parts, and there it was. I had it when I took the picture, but not now, when I needed it. I then started putting all the parts back into their plastic baggie, thinking the build would be delayed until I got another part. And that’s when the part I needed fell out of another hollow part that was ever-so-slightly larger!

I had found a great website with step-by-step photos of the assembly, so everything was straightforward to a certain point. I was warned that certain small springs would try their best to escape, so I made a cloth-cushioned backstop to catch them when they flew. It was used about five times, so the warnings were well worth heeding. I also swept some small parts off the cloth work surface with the cuffs of my shirt, but fortunately Edith’s better eyes found them right away.

Hangup!
And then things came to a halt. I had ordered the National Match trigger and the internet instructions I was following were for the single-stage standard trigger. The parts I had didn’t match the instructions. Unfortunately, I was unable to locate any specific instructions for installing a Rock River National Match trigger online, and Rock River had only sent instructions for a person swapping a trigger in a lower that was already built up. At this point, I was on my own. Fortunately, this trigger/hammer combination installs on the only two pins that fit through the lower receiver, so it’s hard to mistake where they go. And the National Match trigger incorporates the disconnector — a part that’s separate and installed separately on the standard trigger. That caused me to stop and ponder a few more minutes, wondering if I was missing yet another part. But I used to write manuals for the Army and have seen inconsistencies like this before, so I figured it out after a short breather. 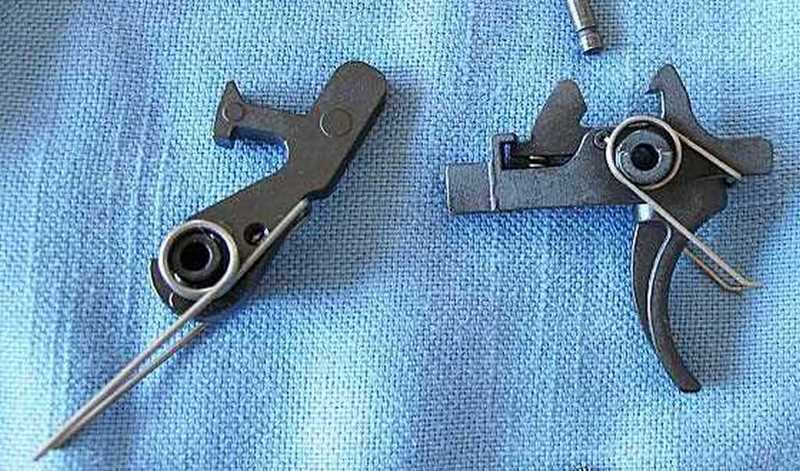 The Rock River Arms National Match hammer (left) and trigger. The instructions failed to note that the disconnector is part of the trigger assembly and doesn’t look like the one for a standard trigger. The hammer spring was also installed backwards, but proved simple to switch once the problem was identified. 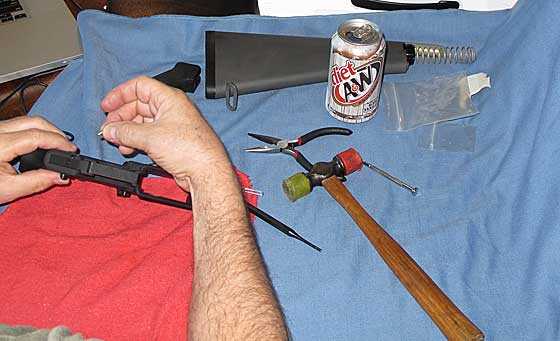 Small parts and springs dictated a slow approach and a safety backstop (just out of frame to the right) to catch the parts when the springs launched them. It was put to the test!

Rock River had installed the trigger and hammer springs on those parts when they sent the kit, but unfortunately they got the hammer spring on backwards. So, there was another short delay while I figured that out. In the end, though, everything worked out fine and the lower receiver went together easily.

Once the lower receiver was completed, I installed the A2 buttstock I’d purchased, and that completed the project. The Rock River buttstock is colored medium gray, but they advised that a wipedown with a oily cloth would deepen the color. In time, it will turn to a matching black.

The lower is complete and the stock is attached. Wiping the stock with an oily cloth deepens the color.

I suppose I spent about three hours doing what might take 30 minutes for someone who’s familiar with the process. The proof of the project was that the trigger and hammer work as they should, and the safety is finctional. And never dry-fire an AR lower without an upper installed, because the hammer will crack the receiver’s walls.

With the lower receiver complete and functioning as it should, it was now the moment of truth. Would the Crosman MAR177 fit properly and function on what I’d just built?

Anyone who has ever learned to clean an M16 or AR-15 knows how the upper fits to the lower. Two captive pins at the front and rear of the lower hold the two assemblies together. When you clean the gun, you typically only remove one of the pins so the lower hinges away from the upper. That gives you access to the bolt carrier and all the parts that require attention. Connecting the lower I’d just built with Crosman’s upper took about 30 seconds. The hammer was already cocked, so I pulled the trigger — and nothing happened!

The MAR177 is very realistic. And the firearm lower means it can be the perfect low-cost trainer for your AR.

Once again, I had butterflies in my stomach. Since I’m not that familiar with the AR guns, I wondered what might have gone wrong. Then I remembered my time at the range on Media Day in January, when I first got to shoot the MAR177. It has to be cocked by pulling back on the charging handle! Once I did that the gun functioned as it should! Now, I am ready to test the MAR177.

The MAR177
If you look closely, you’ll see where the MAR177 differs from a regular AR. For starters, there’s an air reservoir underneath the barrel. And the shiny silver thing at the end of the forearm is the side of the built-in pressure gauge. The rifle operates on 3,000 psi pressure and looks easy to fill from a hand pump. As small as the reservoir is, it shouldn’t take too much effort.

The muzzle has an air compensator to strip off the high-pressure air turbulence for better accuracy. What looks like an AR magazine is a solid metal slug for additional weight. The MAR177 comes with a 10-shot magazine (a single-shot tray is optional, but Crosman sent me one to test) taken from the .177 Benjamin Marauder. The carry handle is split at the bottomfor easier loading. The forward assist on the right side of the receiver is just a casting; it does nothing.

The selector switch is attached to the lower receiver, so of course it’s standard. It is right where your thumb expects it to be if you’re right-handed, and after 35 years I had no problem remembering what to do without looking. Of course, an AR-15 is semiautomatic, only, so there are just two positions — Safe and Fire. If you want to rock-and-roll, you have to raise your right hand and swear the oath.

The rifle weighs 9.5 lbs. on the nose when set up as shown. That’s a hair less than a Garand and a touch more than an 03A3 Springfield. Under the rules, a two-stage National Match trigger is allowed to break at between 4.5 and 5 lbs. and here’s how mine went. The first measured shot, which was about the tenth shot since assembly, measured 6 lbs., 9 ozs. As I kept measuring shot after shot, the pull weight kept decreasing until it hit the 5-lb. level. There, it stabilized — and that’s where it’s breaking now. I will lube the sear contact points with some good moly grease and expect the pull weight to drop by a couple more ounces as the rifle gets used more.

The trigger is completely crisp on stage two — as a National Match trigger should be. It works well with the weight of the rifle, and I expect to have more to say about it when I start accuracy testing.

Notice that the pistol grip I chose is a conventional one. You can get all kinds of wonderful grips for your AR, but this is the one you must use in a match — so I went with it.

There’s much more to tell you about the MAR177, but I’m going to do that as we progress through the other parts of this report. When I left the Army in 1982, I never thought I would have one of these in my hands again, but Crosman has made the impossible happen.