The 125TH has a post-and-bead sight with TruGlo fiberoptic inserts. Fiberoptics are a poor choice for precision shooting because they cover too much of the target to aim precisely; but when you shoot outdoors on a bright day, they’re quick to acquire. Out to 25 yards, they’re adequate; but never choose them for long-range shooting or for hunting in the woods.

The rear notch on the 125TH is too small for the size of the front bead — hence I found it difficult to see any light on either side of the post when sighting. I also discovered that the barrel is drooping quite a lot; because even with the rear sight adjusted as high as it will go, I was still shooting below the aim point at 25 yards. That won’t get any better at longer distances, either. So, I think a scope will be better if I can get it to accommodate the droop as much as I need.

Beeman Kodiaks
The first pellet I tested for accuracy was the Beeman Kodiak. I selected them because I knew they wouldn’t break the sound barrier, and I was shooting inside the house. The distance was 25 yards, and I used a 10-meter pistol target. The hold was at 6 o’clock on the bull. The first group was the best one of the day. It won’t look that good to you, but I learned a lot from it. 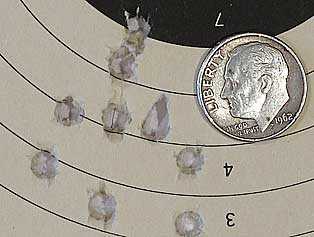 Ten Beeman Kodiaks groups in this 1.272-inch group at 25 meters. Notice that the group is taller than it is wide. That’s important.

The group was 1.272 inches between centers, but it was taller than it was wide. The width is only 0.956 inches. This a characteristic that holds throughout this session.

Pellets that didn’t work
I tried JSB Exact 8.4-grain domes that went supersonic, but they were not grouping well. And Air Arms domes that also weigh 8.4 grains are equally bad. Both pellets broke the sound barrier and gave quite a crack as they went downrange.

The absolute worst pellet of all was the H&N Rabbit Magnum II. For starters, it’s designed with straight walls, so you can’t load it into the breech of a breakbarrel. You have to have something to press it in because your thumb isn’t hard enough to push it to engrave the rifling on the sides of the pellet. But I knew that going in. The first shot was about four inches higher on the target than any other pellet, and I hoped that I had found the miracle pellet for this rifle. Alas, the second pellet dropped about a foot (12 inches) at 25 yards, went through the reflector of my spotlight and popped the light bulb! Needless to say, I stopped shooting those pellets at that point.

Wrong hold?
I tried a different hold with the Kodiaks that were the most accurate pellet to this point. This time the group measured 1.71 inches between centers, but the width was only 1.152 inches. Again, taller than wide. 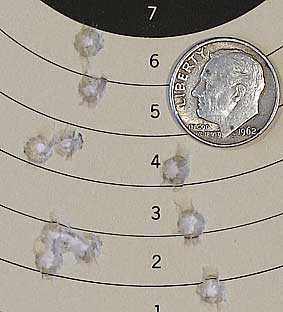 This second group of Kodiaks were shot using a different artillery hold, but it’s also taller than it is wide.

So, the hold didn’t improve things, but it’s now clear that the open sights are causing the problem. I’m not getting enough precision in the vertical orientation, which is why all the groups are significantly taller than they are wide. That means using a scope should show a marked improvement.

How the rifle feels
Whoever suggested trying to pull up on the trigger blade — I can’t do it because the thumbhole stock forces my hand to pull the trigger straight back. And the trigger is too heavy for good work. While there’s no creep in the second stage, there’s considerable travel that can be felt. I have the trigger adjusted as light as it will go, so this is a detractor.

The SAS works very well. I can feel some vibration with the shot, but it dies quickly, which must be attributed to the SAS.

The rifle recoils heavily. But it also rests very well on the flat of the hand, so it isn’t difficult to shoot. The best hold point is with the off hand touching the front of the triggerguard.

If the trigger were lighter, this rifle would be a pleasure to shoot. I’m getting used to the cocking effort needed, and I can’t wait to see how the rifle does with a scope.

A good day!
You might feel from these targets that I had a bad day, but with what I learned about the rifle I think I had a very good day. Next time, I’ll know two pellets to try going into the test, and I’ll also know the best hold to use. Until I did the pellet velocity versus accuracy test a couple weeks ago, I wouldn’t have known that it’s harmonics and not velocity that opens these groups. Let’s see what I can do with that newfound knowledge.

What is it?
Can any reader identify the tool in the photo below, and tell us what is it used for? It will play a part in an upcoming blog. 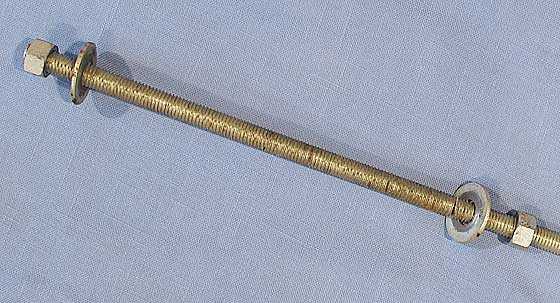