Today will be something different for many of you. This Hatsan 125TH air rifle combo I’m testing is more than just a test of one new gun. It’s really a test of the Hatsan trigger, the SAS, the scope mounting rail and the potential accuracy of Hatsan air rifles in general. So this is an interim step toward the goal of discovering if this air rifle can shoot.

We saw the potential accuracy with open sights in the last report; but as I noted, the front sight is too big for the notch in the rear. The accuracy wasn’t as good as I believe it can be.

I mounted the scope and rings that came with the combo. The two-piece rings were attached to the scope, but they weren’t spaced correctly to engage the cross-slots in the rifle’s scope rail, so I loosened the caps and adjusted them after installing both rings on the rail. It took only a couple minutes, and Hatsan included the one Allen wrench that I needed, so it was no trouble.

I needed to position the scope as far to the rear as it would go to get the correct eye relief, so the fact that the rings had to be moved wasn’t a problem. They would have been moved in any case. Although the rings are thin two-screw cap rings, they seem to be strong enough for the lightweight scope that came in the package.

The scope was mounted back as far as it would go to get the correct eye relief. The scope rail pushes the scope further forward by design, so consider that when buying a different scope.

The scope
The scope in this package is not one you will want to use — even for a little while. The parallax is fixed at long range; and no matter how low you adjust the power, the image seems fuzzy and indefinite. And that’s the heart of today’s report, because I could’t even shoot as well with this scope as I did with the less-than-optimum open sights in Part 3.

However, I went through the trouble of sighting-in the rifle with this scope just to see things like the barrel droop. And it did droop, though not as much as I thought it was going to. At 10 feet, the pellet was hitting about seven inches below the aim point. After adjusting the reticle about 100 clicks up, I got on target. There was room left to adjust, and the erector tube did not feel as though it was floating. As I said, the aiming was so indefinite that I felt the scope wasn’t doing the rifle justice.

But I did not waste any time testing multiple pellets with this scope. I used only Beeman Kodiaks for sight-in and, after confirming the gun was sighted but the scope wasn’t helping, I decided to end the test. 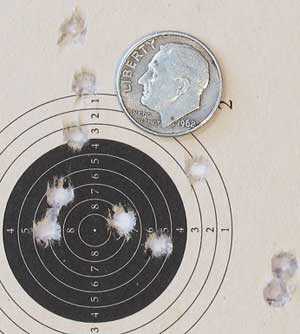 Not real great, is it? This 10-shot, 25-yard group with Beeman Kodiaks tells me everything I needed to know about the rifle at this point. It measures 2.186 inches between centers.

Shooting behavior
The trigger seems to be smoothing out as the test progresses. That agrees with what some owners have said about the Quattro trigger, so we may see an improvement over the first thousand shots. Other spring guns have such improvements, which is why it’s often good to withhold judgement until a couple tins of pellets have gone through the gun.

It also felt as though the cocking effort had dropped significantly. In Part 2, I measured it at 51 lbs. But when I measured it for this report, the effort required to cock the rifle had dropped to 45 lbs. A six-pound decrease is very substantial!

Where to now?
Okay, why did I stop the test with just one 10-shot group? Simple — the rifle was not doing well because I wasn’t able to see the target. There’s no sense shooting any more pellets with this scope, so I stopped.

I also now know that this rifle does, indeed, suffer from a drooping barrel. The next scope I mount will be mounted to take care of that problem from the beginning. I’ll also mount a relatively good scope (i.e., one with bright optics and a fine reticle) to give the rifle every benefit of the doubt.

Don’t get discouraged from this test. As I said at the beginning, it’s an interim test. We’re by no means finished with this rifle, yet.  But it’s useless to waste time when you can clearly see there is a problem, which is what I learned today. With another better scope, we’ll return and complete the test. Only then will we know if the Hatsan 125TH in .177 caliber is an air rifle to choose. 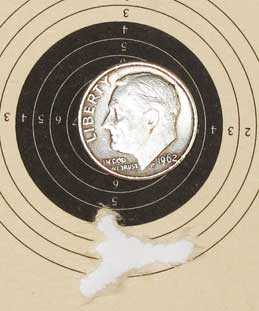 How does rifling twist rate affect velocity and/or accuracy? Part 5