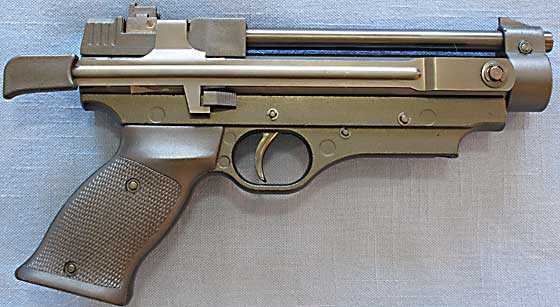 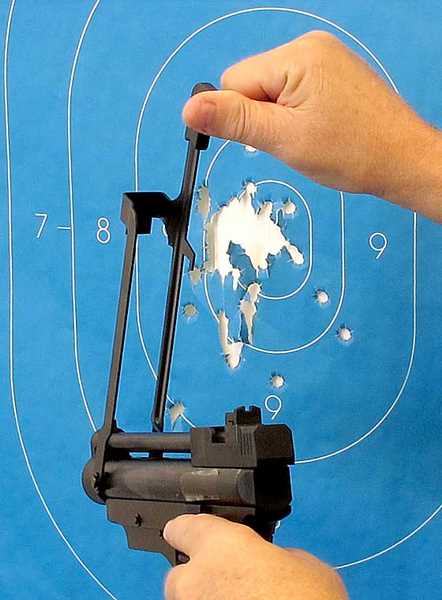 The cocking lever does have two sides, as you can see. Only the right side extends back a little farther to provide a place to grasp the lever at the beginning of the cocking stroke.

On to the test
Okay, let’s get to the velocity. The first pellet I tested was the RWS Hobby. I used it both because it is a very light pure-lead pellet, and also because it’s an accurate pellet in many airguns.

I found that seating the pellets was difficult unless I struck the back of the breech with the heel of my hand to close it after loading. Then, every pellet seated fine.

Next up was the RWS Superdome. This is a medium-weight, .177-caliber pellet that I expected to go slower. But it didn’t go that much slower! The average was 491 f.p.s. with a spread from 488 to 493 f.p.s. That’s a spread of only 5 f.p.s. At the average velocity, this pellet generated 4.44 foot-pounds of energy.

I did have a little excursion with this pellet, however. If you refer to Part 1, I showed you a picture of the open breech, in which a small o-ring is seen around the bolt probe. I lubricated this with one drop of silicone chamber oil and immediately got an increase in velocity. Then I got three detonations! The fastest went 673 f.p.s. I then had to dry off the probe and shoot off the oil until the pistol settled back down, again.

So, I advise against oiling the bolt probe of this pistol. Maybe put some silicone grease on the o-ring — but keep it light!

The last pellet I tested was our new friend, the H&N Baracuda Green. We know this is a very accurate pellet, and I wanted to see what a lightweight pellet would do in the pistol. Actually this pellet weighs 6.48 grains and the Hobby weighs 7 grains, so it shouldn’t be that much faster. The average was 568 f.p.s. with a low of 564 and a high of 575. The spread was 11 f.p.s. The muzzle energy averaged 4.64 foot-pounds. Of the pellets tested, this is the power champ by a slim margin.

Trigger-pull
The single-stage trigger breaks at 4 lbs., 13 oz. on my electronic gauge. It’s still creepy and may be a factor in the accuracy test.

From the comments that have been made, I’m anticipating a good accuracy test for the Indian. Someone said that his out-shot an Umarex Colt M1911A1. If that’s the case, this could turn out to be a wonderful air pistol. Accuracy test is coming soon!