Happy Thanksgiving! This is the day Americans set aside to remember the things we’re thankful for as we eat a feast of traditional turkey.

A couple days ago, blog reader Rob asked for my list of most-favorite spring guns and why they’re my favorites, so I thought today would be a good day to do that. So, here goes. I’m doing only the springers, because that’s what he asked for. What you’re about to read is by no means a complete list of airguns that I like.

Diana model 27
I bought my first Diana model 27 air rifle from a pawn shop in Radcliff, Kentucky, when I was stationed at Fort Knox in the 1970s. It was tired-looking and rusty but still shot like every 27 does — smooth and straight. This one was a Hy Score 807. I never tuned it because I didn’t know about such things in those days. I just shot it offhand as a plinker. That rifle cocked so easily that shooting it was like eating peanuts — I just couldn’t stop! I never did figure out the trigger, though. It wasn’t until I read the owner’s manual for a Diana 35 about 20 years later that I figured out how to adjust the trigger on this rifle. Today, I own 2 model 27 rifles and a model 25 rifle that I’ve been testing. And these are some of my favorite airguns.

FWB 300S
Because of my involvement with airguns, I’ve owned quite a few target air rifles over the years. There have been some real beauties, including FWB 150 rifles, Diana 75 airguns and Anschütz 250 air rifles. Because I’m always buying and selling, there have been several of each. But the FWB 300S, which I got a couple years ago from my good friend Mac, has come to stay. That’s because it’s the most accurate air rifle I’ve ever owned. By “most accurate,” I’m being extremely critical. I’m talking about the last thousandth of an inch. I have other 10-meter air rifles that are very accurate — and over the years, I’ve had many more that were also very accurate — but for some reason, this particular rifle is the best one I’ve come across.

Beeman R8
Okay, here’s where I’ll have a problem as a writer. I’ve just said the FWB 300S is the most accurate air rifle I’ve ever owned, yet this R8 is a phenomenal shooter, as well. You last saw it in the report titled First shot: Yes or no?, where I fired 10 first shots at 25 yards to see how accurate they would be. But I did a three-part report for you back in 2010, where I showed the rifle to you. This rifle was a special gift that came at a particularly rough time in my life, and just the thought that came with it is enough to make it a favorite. But the way this finely-tuned rifle shoots makes it a keeper on its own merits. It cocks easily and puts each pellet exactly where I want it to go. The Tyrolean stock fits me very well, and I just smile every time I pick this one up. I cannot say enough good things about it. I’ve never even seen a plain Beeman R8 before, so I have no idea if they’re worthwhile or not. All I know is that this tuned one is a keeper!

Whiscombe JW75
I bought the Whiscombe air rifle to use as a testbed for airgun articles, and that’s how it’s been used over the years. You’ve seen it several times — most recently in the 11-part Pellet velocity versus accuracy test. Unlike my other favorites, I don’t shoot the Whiscombe that often. The size and weight of the rifle plus the need to cock the underlever three times per shot makes it less than convenient. But I rely on it a lot and would not like to be without it.

Air Arms TX200 Mark III
One spring rifle I own and love that is still available new is a TX200 Mark III. The Air Arms TX200 is simply the finest spring rifle being made today, in my opinion. It’s heavy and can be considered hard to cock; but it has the best trigger on the market, and the rifle is deadly accurate. This is another air rifle I don’t shoot a lot anymore, but that’s because I’m always testing something else. There is no time left to enjoy the stuff I really like. This is the last spring rifle I used for field target competition; and as far as I know, it’s second to none in that capacity. The thing I like best about the TX200 is that I know I can recommend it to someone and they won’t be disappointed. Right out of the box, it shoots like a finely tuned air rifle.

Daisy 499B
Daisy has changed the name of this BB gun several times over the years, but the Avanti Champion 499 is the gun I’m talking about. It’s a BB gun that can put 10 shots through a quarter-inch hole at the regulation competition distance of five meters — offhand! Like the TX200, the 499 is still available and is one of the best buys in airgundom, in my opinion. Adults can shoot it and have as much fun as the kids for whom it was built.

Air Venturi Bronco
I would be remiss if I didn’t include the Air Venturi Bronco on my list. This is a rifle I had a hand in creating, and I did so with the Diana 27 in mind. I wanted a modern rifle that incorporated as many of the 27’s fine features as possible and still held the price low enough to enjoy. The Bronco certainly is that rifle. The two-bladed trigger is especially clever and tells the shooter exactly when the shot is going off. I know some folks don’t like the blonde stock or the Western lines, but I personally like both features. There are too many air rifles with muddy brown stocks on the market, and every one of them seems to have a Monte Carlo comb. But not the Bronco. It’s an individual air rifle that stands on its own.

The one that got away
There’s always at least one, isn’t there? This one came and delighted me while I had it. It’s the Sterling HR-81 that I got in trade at the Roanoke airgun show. It wasn’t working well when I got it, but Vince fixed it for me; and afterward, it was a wonderful shooter. This rifle had sights that were cheap and prone to break, and the ones on my gun were already gone when I got it. But a scope fit well, and the low recoil of the gun made securing it to the rifle an easy task. The trigger is light and (after Vince looked at it) crisp.

The firing behavior is good, though the rifle has a pronounced forward jump. Besides that, the rifle lies dead in the hand when it fires. And the accuracy is quite surprising — fully equal to my Beeman R8. When you cock the underlever, the spring-loaded bolt pops open giving access to the loading trough, making loading very easy and convenient.

What the future holds
I currently have the Falke 90 stock being restored, which will be a blog of its own. If the job turns out well, I can see that rifle becoming a favorite. It started as a gun that was practically forced on me at an airgun show. It was so dog-ugly that despite the extreme rarity (fewer than 200 are believed to have been produced) that even collectors who know very well what it’s worth declined to even make an offer on it when I had it for sale at this year’s Roanoke show. So I thought, what the heck, I’ll have it restored and then we’ll see what people think. Blog reader Kevin turned me on to a wonderful stock restorer who has the entire rifle now. There are a huge number of critical faults with the stock, so he’s really up against it; but if he can do even half of what I see he’s done for other damaged stocks, this project will turn out very well.

What I didn’t include
What about the Beeman R1? I wrote a book about it, for gosh sakes. Surely, it has to be one of my favorites! Sorry to disappoint, but no, it isn’t. I still like it a lot, but it isn’t the gun I pick up when I want to have fun.

What about an HW55? They’re so accurate! Why aren’t they on the list? Don’t know, for sure. They just aren’t.

Rob asked me for my favorite spring airguns, and I’ve listed them. Maybe I forgot one, but I don’t think so. No, there aren’t any spring-piston pistols that I consider to be favorites.

Among my firearms, I have several rifles that are tackdrivers. Then there’s my dog-ugly, but nearly-new No. 4 Enfield. It’s not super-accurate and certainly no beauty. But for some reason, I can’t bear to part with it. So, it remains in my collection, getting shot once a year or so. Something I can’t define makes it a favorite, and I guess that will just have to suffice.

I have one last thing to say. Two years ago, I was recovering from a serious illness that brought me pretty close to the brink. I still had a drain in my pancreas, and there was an undiscovered hernia festering in me that wouldn’t surface until the night I was due to fly to the 2011 SHOT Show. My eyesight was degraded from dehydration and serious anemia, plus I was suffering from undiagnosed Type 1 diabetes. In short, it was a bad time.

You readers banded together and supported Edith and me for the long months it took to get through this tunnel of horrors. You put up with a lot, and we owe all of you a debt of gratitude that cannot be repaid. For what you all did for us, we are very thankful. 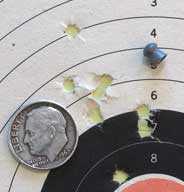