This Diana 23 has led a hard life.

Today, we’ll see how accurate the Diana model 23 is. This report was supposed to be published just before the Roanoke airgun show, but so many things popped up at the last minute and got in front of it that I held off on this one til now.

Before we begin, let me give you a little update on the rifle. At Roanoke, Larry Hannush, the owner of all those beautiful ball reservoir airguns, came over to my table and handed me a brand new barrel for the model 23. He had read that I was going to refinish it with Blue Wonder and he thought a new barrel would shorten my time on the project. In fact the barrel of the gun was the only part where rust had done some more serious work. The old barrel would have either had pits in it, or I would have had to draw-file them out. This new barrel solved a problem for me, so thanks, Larry!

I decided to test accuracy at 10 meters because of the small size of the rifle. I selected 3 different pellets for this test, but none of them was the 7.9-grain Crosman Premier pellet. I would like to tell you why. Crosman pellets are made from a lead alloy that’s hardened with antimony. As a result, their skirts don’t deform as easily as pellet made from pure lead. In a lower-powered rifle like the 23, that means they may not seal all the air behind the pellet.

The second reason I usually don’t select Crosman pellets for guns like the 23 is that they’re often right at or just under the required dimensions. They work very well in repeaters where their smaller size and harder lead are an advantage. In more powerful guns, their skirts can be blown out into the rifling; but in a single-shot spring-piston air rifle of low power, neither of these things is an advantage. So, I seldom select them for guns like the 23.

Now, let’s begin the test. The rifle is rested at 10 meters, and I’m using a classic artillery hold — though as light as the 23 is, it isn’t easy to hold this way. I had to grip it more than I would have liked just to control it.

RWS Hobby flush-seated
The first pellet I tried was the venerable RWS Hobby wadcutter. At just 7 grains, it seemed perfect for the power of the 23. I seated these pellets flush, but as I did something in the back of my mind sent up a red flag. After all the testing of deep-seated pellets in air rifles of lower power, I reckoned I had to come back and also try this pellet seated deep.

Ten flush-seated Hobbys went into a 0.792-inch group at 10 meters. The group looks okay, but it’s a little on the large side — even for shooting a light rifle with open sights. 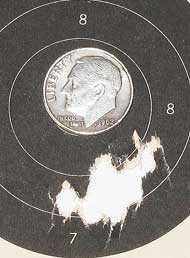 Ten flush-seated RWS Hobby pellets went into 0.792 inches at 10 meters. Not the best group for 10 meters, but a good start.

At this point, I knew I had to try seating these pellets deep in the breech. I was going to give you a link to the one report where I showed that deep-seating improves accuracy with guns of lower power, but some searching turned up about 20+ reports that all show the advantages of deep-seating! That kind of overwhelmed me. I guess I’ve been doing this for a lot longer than I thought!

The next 10 pellets were seated deep into the breech, using the Air Venturi Pellet Pen and Pellet Seater. Of course, you can also use a ballpoint pen to seat pellets; but this seating tool allows you to adjust the depth to which you seat the pellet, and that can be beneficial.

This time, 10 Hobbys made a group measuring 0.52 inches between centers. Not only was it significantly smaller than the first one, the point of impact shifted up about an inch and the group became very vertical. The gun was definitely shooting this pellet differently, and all that had changed was the seating depth.

Ten RWS Hobby pellets seated deep into the breech went into 0.52 inches at 10 meters. This is good proof of the need to seat pellets deep in this rifle.

After seeing the results of this test, I decided to seat the rest of the pellets deep. It seems like that’s what the 23 wants.

JSB Exact RS
Next, I tried the JSB Exact RS dome. In the velocity test of this rifle, you’ll remember that this pellet exceeded both the other pellets in velocity and muzzle energy. I was anxious to see how it did for accuracy. This time, I didn’t fool around with flush-seating — I just assumed deep-seating was the way to go. Ten of them went into 0.618 inches.

Shooting behavior of the Diana 23
Like I said before, the Diana 23 is a light rifle, and holding it with the artillery hold is difficult. On top of that, add a trigger that breaks at almost 7 lbs., and you can see that I was fighting the rifle’s physical characteristics for accuracy. When I break down the rifle for refinishing, I think I’ll take a look at lightening the trigger. Dropping a few pounds of pull could have a major impact on accuracy.

The rifle does discharge without much vibration. The feel of each shot is very solid and quick.

Beeman Devastator
The last pellet I tried was the Beeman Devastator hollowpoint. I’m aware that Beeman refers to this pellet at a pointed pellet, so I’m showing you an enlarged view here. It sure looks like a hollowpoint to me — and it’s designed to perform like one, too. 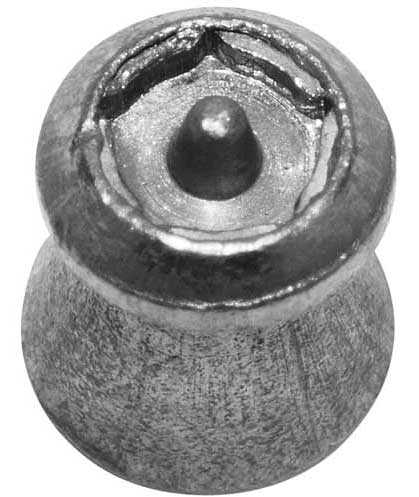 I think the image speaks for itself. The Devastator is a hollowpoint that has a short point in the center. It’s not a pointed pellet.

I decided to try Devastators because of how surprising they were in the Pellet velocity versus accuracy test I did back in December of 2011. They proved that vibration and not velocity alone is what destroys accuracy in a pellet. In this test, 10 deep-seated Devastators made a 0.667-inch group, which is on the high side. I don’t think this is the right pellet for this rifle. 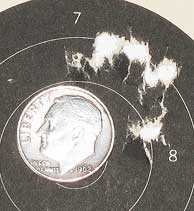 Ten Beeman Devastators went into 0.667 inches at 10 meters. That’s not as good as I would like.

Overall evaluation
I guess I’m surprised by the accuracy potential of this little spring rifle. It looks so small that I thought its performance would also be small. But it wasn’t. Of course, I’ve learned that this one is shooting a bit slow, so maybe there’s even more to see. I think this rifle deserves a 25-yard test before I strip it down and begin refinishing.